Lung lineage differentiation requires integration of complex environmental cues that include growth factor signaling, cell-cell interactions and cell-matrix interactions. Due to this complexity, recapitulation of lung development in vitro to promote differentiation of stem cells to lung epithelial cells has been challenging. In this protocol, decellularized lung scaffolds are used to mimic the 3-dimensional environment of the lung and generate stem cell-derived airway epithelial cells. Mouse embryonic stem cell are first differentiated to the endoderm lineage using an embryoid body (EB) culture method with activin A. Endoderm cells are then seeded onto decellularized scaffolds and cultured at air-liquid interface for up to 21 days. This technique promotes differentiation of seeded cells to functional airway epithelial cells (ciliated cells, club cells, and basal cells) without additional growth factor supplementation. This culture setup is defined, serum-free, inexpensive, and reproducible. Although there is limited contamination from non-lung endoderm lineages in culture, this protocol only generates airway epithelial populations and does not give rise to alveolar epithelial cells. Airway epithelia generated with this protocol can be used to study cell-matrix interactions during lung organogenesis and for disease modeling or drug-discovery platforms of airway-related pathologies such as cystic fibrosis.

Directed differentiation of pluripotent cells to the lung lineage is dependent on precise signaling events in the microenvironment 1,2. Due to the dynamic nature of this process it has been challenging to mimic the precise events of lung organogenesis in vitro. Recent reports have used step-wise lineage restriction strategies with soluble growth factor supplementation of two-dimensional cultures to achieve lung differentiation3-8. In step-wise differentiation protocols, pluripotent cells, whether embryonic stem cells (ESC) or induced pluripotent stem cells, were first differentiated to the definitive endoderm germ layer. Endodermal cells were subsequently pushed to an anterior endoderm fate and thereafter to lung progenitor cells, as identified by the expression of homeodomain-containing transcription factor NKX2-1. These lung progenitors were further differentiated to proximal (airway) or distal (alveolar) lung epithelial cells with continued growth factor supplementation. Such 2-dimensional strategies have had some success in generating lung epithelial cells, however there are several limitations including unclear efficiencies, possible contamination from other endodermal lineages, lack of a 3-dimensional (3D) structure, and in some instances use of undefined cultures with serum supplementation. Culture of pluripotent or differentiated cells on decellularized lung scaffolds is increasingly used as an assay to assess the regenerative potential of seeded cells in forming lung epithelial structures3,5,6,8,9. Such reports culture seeded cells on scaffolds with continued growth factor or serum supplementation.

Lung development involves the division, migration, gene expression and differentiation of individual cells in response to environmental cues. The extra cellular matrix (ECM) is a latticework of glycoproteins that in addition to providing structural support, directs tissue morphogenesis by integrating and regulating these processes10,11. By using the lung ECM scaffold as a natural platform for endoderm culture to better mimic the in vivo lung developmental milieu, we have generated stem cell-derived airway epithelial cells in a defined 3D-culture setting with high efficiency and reproducibility.

This protocol promotes lung lineage differentiation of definitive endoderm as early as 7 days, observed with the emergence of NKX2-1+/SOX2+ early proximal lung progenitors. By day 14 and 21 of culture mature airway epithelial cell populations emerge including ciliated (TUBB4A+), club (SCGB1A1+), and basal (TRP63+, KRT5+) cells with morphological and functional resemblance to native mouse airways. This protocol demonstrates the importance of the 3D-matrix microenvironment for achieving robust differentiation to airway epithelial cells.

Animal experiments were carried out in accordance with the Animal Care Committee guidelines of the Hospital for Sick Children Research Institute.

As outlined in this protocol, robust differentiation of definitive endoderm to mature airway epithelial cells can be achieved using extended culture of seeded cells on decellularized lung scaffold sections. It is recommended that decellularized scaffolds be characterized to ensure (1) host cells are completely removed, and (2) extracellular matrix proteins are preserved prior to using scaffolds for differentiation. Decellularization can be assessed using tissue staining with hematoxylin and eosin (H&E) and 4',6-diamidino-2-phenylindole (DAPI), as illustrated in Figure 1A. High-magnification scanning electron microscope (SEM) analysis of scaffolds confirms the absence of host cells and intact matrix architecture, as illustrated in Figure 1B. Additional characterization of the remaining scaffold by tensile testing and immunostaining for matrix proteins can be carried out to ensure preservation of the ECM following decellularization16.

Differentiation to the lung lineage is observed as early as 7 days following scaffold culture. Airway epithelial progenitor cells positive for NKX2-1 and SOX2 are detected using IF confocal analysis as illustrated in Figure 3A. SOX2 positive, NKX2-1 negative cells are likely pluripotent endodermal cells that have not differentiated to the lung lineage. With longer culture these cells may start to express NKX2-1 or undergo apoptosis without adequate support in the microenvironment. IF analysis of day 21 cultures reveals a mature airway epithelial population containing TUBB4A+ ciliated cells, SCGB1A1+ club cells, and TRP63+/KRT5+ basal cells as illustrated in Figure 3B. SEM analysis of the surface of day 21 cultures reveals morphological similarity of stem cell-derived cultures to mouse airways.

Both isolated matrix proteins (collagen I, collagen IV, fibronectin, laminin) and decellularized rat kidney scaffolds were unable to promote lung-lineage differentiation when seeded with definitive endoderm and cultured under the same conditions as described above16. This demonstrates that the 3D microenvironment created by lung-derived scaffolds is distinct from kidney-derived scaffolds in its ability to promote lung-lineage differentiation of seeded endodermal cells. 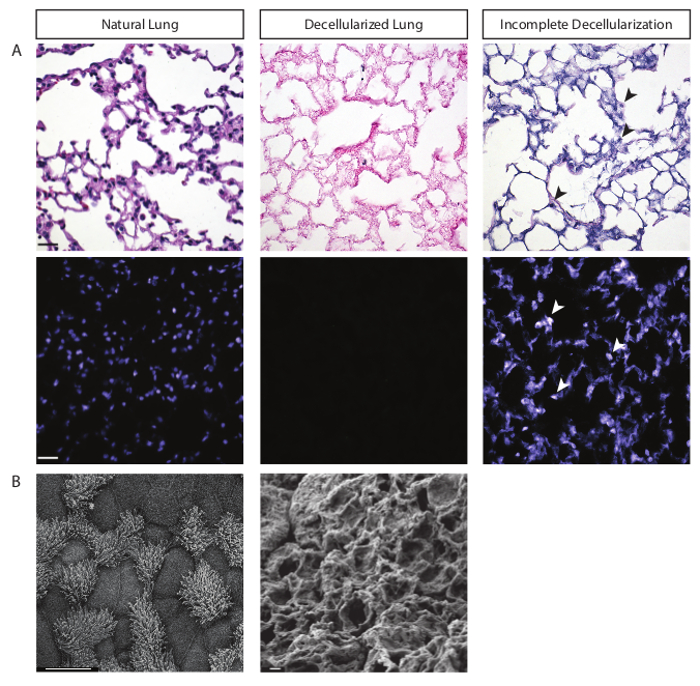 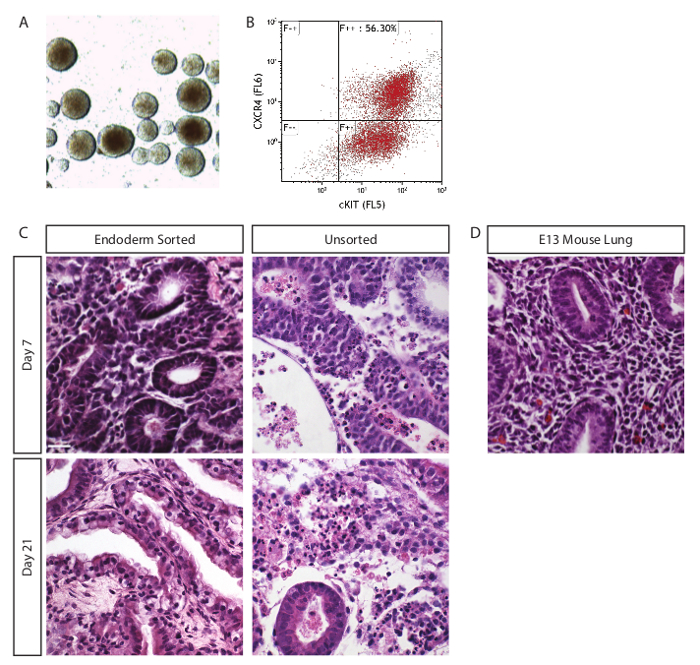 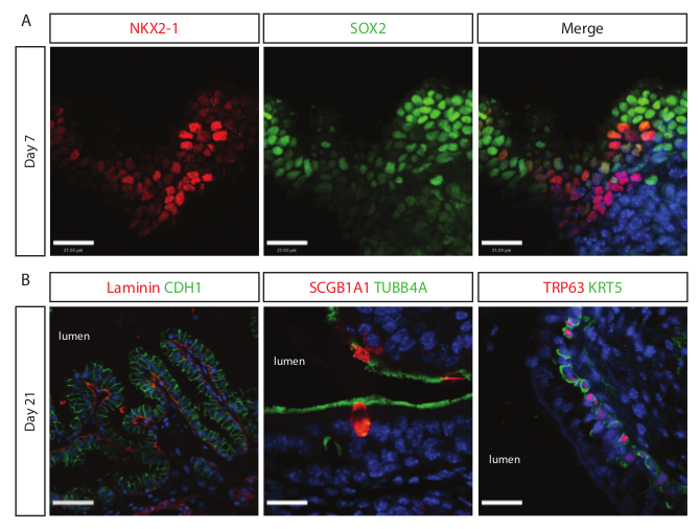 Decellularized scaffolds can be stored in decontamination solution at 4 °C for up to 7 days prior to recellularization. Scaffolds kept for longer durations may be functional, however we have not tested to confirm this. To achieve efficient organization and differentiation it is required to enrich for definitive endoderm by FACS following induction with activin A. Non-endoderm cells in day 6 EBs often express pluripotency marker Oct4 and if seeded on scaffolds will continue to proliferate without organization and specification to the lung lineage. The seeding density can also be adjusted based on cell line-specificity to achieve complete recellularization of scaffolds.

A limitation of this protocol is in its inability to promote differentiation to alveolar epithelial cells. Although NKX2-1+/SOX9+ distal progenitor cells are detected after seven days of culture on scaffolds, this population is not present at day 14, and day 21. Markers of mature type I alveolar epithelial cells (AQP5) and type II alveolar epithelial cells (SFTPB, SFTPC) are not detected at any stage during scaffold culture. This may be due to a requirement for additional growth factor supplementation and submerged culture conditions to promote alveolar lineage specification, while as described here, matrix proteins and the remnant matrix-bound growth factors on decellularized scaffolds is sufficient to promote airway lineage differentiation.

The critical step for promoting differentiation of definitive endoderm to airway epithelial cells using lung scaffolds is optimization of the decellularization process. Cellular components must be completely removed while matrix components are preserved. Tissue staining for nuclear material using DAPI, ultra-structural analysis of scaffolds with scanning and transmission electron microscopy, and DNA assays can be used to confirm removal of all cellular components. ECM protein composition of scaffolds can be assessed using IF staining and immunoblot analysis for matrix proteins: collagen I, collagen IV, elastin, fibronectin, heparin sulfate proteoglycans, and laminin16.

These stem cell-derived lung epithelia can be used in disease modeling and drug-discovery platforms of airway-related pathologies such as cystic fibrosis. The potential of these cell-matrix constructs in regenerative applications such as tissue repair and cell therapy can be examined by in vivo transplantation of engineered constructs in various mouse models. Furthermore, this 3D in vitro method for airway differentiation can be easily adapted to study various parameters effecting lung lineage specification by manipulating growth factor availability and cell-matrix signaling of cultures during different stages of differentiation on scaffolds.

There are no competing financial interests to declare.

We wish to thank Dr. Rossant and Dr. Bilodeau for the Nkx2-1mcherry ESC used in experiments depicted in Figures 1-3. FACS was performed in The SickKids-UHN Flow Cytometry Facility. This work was supported by operating grants from the Canadian Institutes for Health Research and an infrastructure grant (CSCCD) from the Canadian Foundation of Innovation.