The microtubule-associated protein tau is a neuronal protein that localizes mostly in axons. Generally tau is essential for normal neuronal functioning because it is involved in microtubule assembly and stabilization. Besides neurons, tau is expressed in human breast, prostate, gastric, colorectal, and pancreatic cancers where it shows nearly similar structure and exerts similar functions as the neuronal tau. The amount of tau and its phosphorylation can change its function as a stabilizer of microtubules, and lead to the development of paired helical filaments in different neurodegenerative disorders, such as Alzheimer's disease. Determining the phosphorylation state of tau and its microtubule-binding characteristics is important. In addition, examining the intracellular localization of tau is important in different diseases. This manuscript details standard protocols for measuring tau phosphorylation and tau binding to microtubules in colorectal cancer cells with or without curcumin and LiCl treatment. These treatments can be used to stop cancer cell proliferation and development. Intracellular localization of tau is examined by using immunohistochemistry and confocal microscopy while using low amounts of antibodies. These assays can be used repetitively for screening compounds that affect tau hyperphosphorylation or microtubule binding. Novel therapeutics used for different tauopathies or related anticancer agents can potentially be characterized using these protocols.

Tau was originally identified as a heat-stable microtubule-associated protein that was co-purified with tubulin1. Tau is exclusively expressed in higher eukaryotes2,3,4. The main function of tau is to control microtubule assembly1,5,6. It also contributes to polymerization of microtubules7, axonal transport8, changes in axonal diameter9, formation of neuroma polarity, and neurodegeneration10. Tau also acts as a protein scaffold to control some signaling pathways. Rat brain studies suggest that tau is neuron-specific and that it primarily localizes in axons11. Because tau is essential for microtubule polymerization and neuronal development, tau was hypothesized to play a major role in axonal development in the central nervous system; this hypothesis was later verified by in vitro and in vivo experiments. In addition to neurons, tau is expressed in different non-neuronal cells, including liver, kidney, and muscle cells12,13. Tau is expressed also in human breast, prostate, colorectal, gastric, and pancreatic cancer cell lines and tissues14,15,16,17,18,19. Tau is also found in inclusion-body myositis as twisted tubulofilaments in inclusion bodies20.

Colorectal cancer, an ageing-associated cancer, is the third most frequently diagnosed cancer and the third prominent death-causing cancer for both men and women28. Colorectal cancer is one of the main death-causing cancers in the Western world29. Because both colorectal cancer and Alzheimer's disease are associated with ageing and both happen mainly in the developed countries where people enjoy similar dietary habits, the two diseases may somehow be correlated. In addition, tau-positive and tau-negative cancer cells respond differently to chemotherapeutic agents, e.g., paclitaxel16.

Curcumin is one of the main derivatives of Curcuma longa, the Indian spice turmeric30. For centuries, South Asian populations have consumed turmeric in their diets on a daily basis. Curcumin is used to treat different diseases, including colorectal cancer, Alzheimer's disease, diabetes, cystic fibrosis, inflammatory bowel disease, arthritis, hyperlipidemia, atherosclerosis, and ischemic heart disease31,32,33,34,35,36,37,38. Lithium can also kill colorectal cancer cells or prevent their proliferation39. Lithium can also be used for treating Alzheimer's disease40 as it decreases tau aggregation and prevents its hyperphosphorylation as observed in a transgenic mouse model41,42,43,44.

This manuscript aims to: 1) measure the total tau and phospho-tau expression levels in treated cells; 2) describe a phosphatase assay to measure overall tau phosphorylation; 3) examine microtubule-binding of tau; and 4) localize tau by confocal microscopy in colorectal cancer cell lines treated with curcumin or LiCl. Results reveal that cell treatment with curcumin, which is a supposedly good chemotherapeutic agent for colon cancer, and treatment with LiCl can reduce expression of both total tau and phosphorylated tau in colorectal cancer cell lines. These treatments can also cause nuclear translocation of tau. However, unexpectedly, curcumin fails to improve binding of tau to microtubules.

2. Cell Culture, Treatment with Curcumin or LiCl Treatment, and Examination of Protein Expression

5. Localization and Expression of Tau after Treatment of Cells with Curcumin 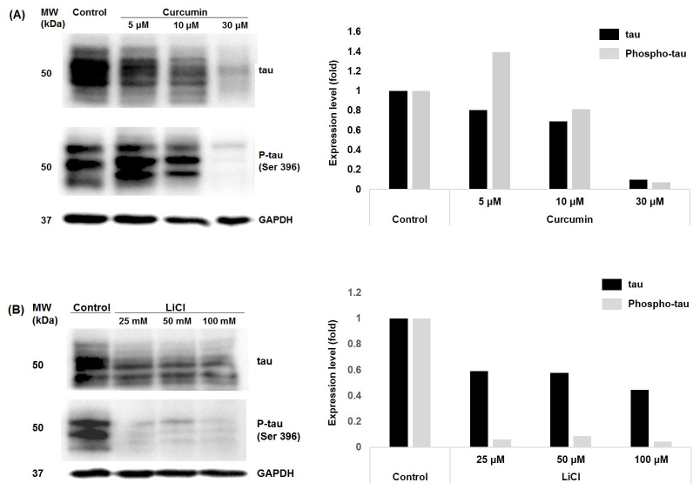 Figure 1: Tau and phospho-tau expression in colorectal cancer cells following curcumin or LiCl treatment. Samples extracted from control cells or cells treated for 24 h with three different concentrations of (A) curcumin and (B) LiCl were resolved on 10% polyacrylamide gels by SDS-PAGE and probed with anti-tau or anti-phospho-tau antibody. Densitometry analyses of the Western blot results are presented on the right panel. Please click here to view a larger version of this figure. 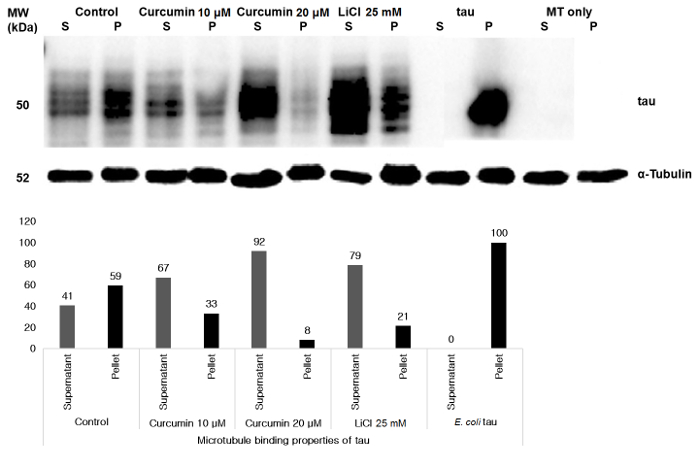 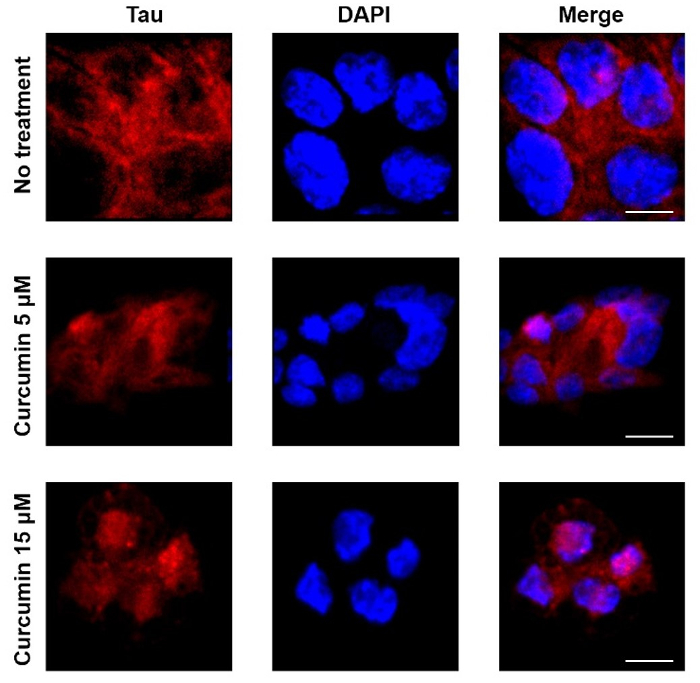 This assay is based on the principle that phosphorylated protein moves slower than its non-phosphorylated state. Alkaline phosphatase and alkaline phosphatase buffer are used in this protocol. After adding the assay components to the cell lysates, samples should be incubated for a specific optimal duration at a specific temperature. After incubation, samples should be boiled in the SDS sample buffer to stop the reaction. Previously, different experimental protocols may have been used to assess the binding of tau to microtubules. The microtubule-binding assay presented here is easy to perform while including both positive and negative controls to provide quality assurance using supernatant and pellet fractions. The MT-only negative control was used to verify that MT does not contain any bound endogenous tau. In addition, pure human tau-352, a microtubule-binding tau was used as the positive control. To separate the microtubule-binding fraction (pellet) from the non-binding fraction (supernatant) ultra-speed centrifugation was used; this procedure can be a limitation because such an ultracentrifuge is expensive and not widely available. In addition, because low quantities of samples are used, long, thin centrifuge tubes with adaptors are needed for use in the ultracentrifuge rotor. Though it is possible to re-use such tubes, single-use is advisable to avoid cross-contamination. Finally, an advantage of the tau-localization protocol is that only small quantities of primary and secondary antibodies are needed. After fixation, permeabilization, and blocking of the cells adherent to coverslips, a small drop of antibody was deposited on a small piece of PVDF, which was then placed inside the wells of a 6-well plate. The coverslips were kept such that the antibody could access the cells. By using this protocol, the amount of antibodies used can be minimized.

Some precautions should be kept in mind to ensure reliable and quantifiable results. Firstly, strict aseptic techniques should be used to avoid contamination in cell cultures and cell extracts. The complete RIPA lysis buffer should be prepared fresh. In the phosphatase assay, it is important to boil the samples for 3 min and start SDS-PAGE immediately after incubation of phosphatase-treated and untreated samples. Tau-352 should be divided into small aliquots and kept on ice after removal from the −20 °C freezer and deposited back into the freezer immediately after use. After removal from the −80 °C, MT stocks should be kept on ice if reused within 72 h; otherwise, keep them at room temperature. The PEM buffer should be prepared as a 10x concentrated solution because the 1x buffer needs to be freshly made when GTP and paclitaxel are added.

Tau functions are regulated by the extent of its phosphorylation. Tau hyperphosphorylation does not occur in normal adult brain tau similar to tau-352, which was used as positive control in the microtubule-binding assay. However, tau hyperphosphorylation occurs in neurodegenerative diseases. This protocol and subsequent results demonstrate that human colorectal cancer cell lines also carry phosphorylated tau similarly to that in Alzheimer's disease brains. Treatment with high-dose curcumin and especially LiCl can minimize tau phosphorylation. Thus, a good correlation between neurodegenerative diseases, such as Alzheimer's disease, and colorectal cancer may exist in regards to tau hyperphosphorylation, and curcumin or LiCl can be used to treat both colorectal cancer and Alzheimer's disease. Lastly, studying tau phosphorylation and tau microtubule binding is significantly relevant not only for neurodegenerative diseases but also for some chemotherapeutics because agents that modify tau microtubule binding are dynamically studied as cancer therapeutics51. The protocols presented here will potentially help the discovery and development of new therapeutic agents to treat different tauopathies and cancers.

The authors declare that they have nothing to disclose.

This research was performed as part of the project titled 'Development and industrialization of high value cosmetic raw materials from marine microalgae', funded by the Ministry of Oceans and Fisheries, Korea, and was supported by an intramural grant (2Z04930) from KIST Gangneung Institute of Natural Products.