We describe the use of hematopoietic stem cell transplantation (HSCT) to assess the malignant potential of genetically engineered hematopoietic cells. HSCT is useful for evaluating various malignant hematopoietic cells in vivo as well as generating a large cohort of mice with myelodysplastic syndromes (MDS) or leukemia to evaluate novel therapies.

Myelodysplastic syndromes (MDS) are a diverse group of hematopoietic stem cell disorders that are defined by ineffective hematopoiesis, peripheral blood cytopenias, dysplasia, and a propensity for transformation to acute leukemia. NUP98-HOXD13 (NHD13) transgenic mice recapitulate human MDS in terms of peripheral blood cytopenias, dysplasia, and transformation to acute leukemia. We previously demonstrated that MDS could be transferred from a genetically engineered mouse with MDS to wild-type recipients by transplanting MDS bone marrow nucleated cells (BMNC). To more clearly understand the MDS cell of origin, we have developed approaches to transplant specific, immunophenotypically defined hematopoietic subsets. In this article, we describe the process of isolating and transplanting specific populations of hematopoietic stem and progenitor cells. Following transplantation, we describe approaches to assess the efficiency of transplantation and persistence of the donor MDS cells.

Myelodysplastic syndromes (MDS) represent a diverse set of clonal blood disorders characterized by ineffective hematopoiesis, morphologic evidence of dysplasia, and a propensity for transformation to acute myeloid leukemia (AML)1,2,3,4. Ineffective hematopoiesis is recognized as a maturation arrest in bone marrow, and results in peripheral blood cytopenias despite a hypercellular bone marrow1,3. The incidence of MDS has been variously estimated as 2-12 cases per 100,000 persons annually in the United States, and the incidence of MDS increases with age, making this an important condition to understand given the aging U.S. population3,5. Although most cases of MDS have no clear etiology, some cases of MDS are thought to be due to exposure to known genotoxic agents, including solvents such as benzene, and cancer chemotherapy6.

MDS patients typically have acquired mutations in the MDS cells7. Although relatively uncommon, a number of MDS patients have acquired balanced chromosomal translocations involving genes such as NUP98, EVI1, RUNX1, and MLL (http://cgap.nci.nih.gov/Chromosomes/Mitelman). Our laboratory has a long-standing interest in chromosome translocations, which involve the NUP98 gene8. Transgenic mice that express a NUP98-HOXD13 (NHD13) transgene regulated by the Vav1 promoter and enhancer elements display all of the key features of MDS, including peripheral blood cytopenias, morphologic evidence of dysplasia, and transformation to AML9.

Although MDS have been recognized for over 60 years10, and are considered to be a clonal stem cell disorder, efforts to engraft human MDS cell in immunodeficient mice have been largely unsuccessful, because the MDS cells engraft poorly11,12,13,14 and the mice do not develop clinical disease. In an effort to identify which hematopoietic cells can transmit MDS, we turned to the NHD13 model, and showed that we could engraft MDS as a disease entity that showed all of the cardinal features of human MDS, including peripheral blood cytopenias, dysplasia, and transformation to AML15. In this report, we present the technical details of these experiments, as well as approaches to further fractionate hematopoietic stem and precursor cells (HSPC), in an effort to identify MDS-initiating cells.

We show representative figures for results of several experiments. Figure 1 shows a representative flow cytometry sorting experiment. During normal hematopoietic differentiation, as cells become committed to a specific hematopoietic lineage, they acquire lineage-defining cell surface markers and lose the potential for self-renewal. Therefore, in wild-type mice, stem cell self-renewal is confined to lineage-negative BMNC. In this experiment, we sorted BMNC from NHD13 bone marrow into lineage-negative, low lineage positive, and high lineage-positive cells. These sorted cells were then transplanted into WT recipients to determine self-renewal capacity.

Figure 2 shows results from a separate experiment, in which lineage negative cells or unsorted cells from NHD13 donors with MDS were transplanted into lethally irradiated WT recipients. The NHD13 donor cells expressed the CD45.2 cell surface marker, whereas the WT competitor cells (see section 2.2.1 above) expressed the CD45.1 cell surface marker. Figure 3 shows serial engraftment analysis of either unsorted NHD13 BMNC, or lineage-negative NHD13 BMNC. After approximately 16 weeks, the NHD13 cells outcompete the WT cells, as shown by the increasing percentage of CD45.2+ cells in the peripheral blood. Figure 4 shows an example of leukemic transformation from a mouse transplanted with NHD13 MDS cells. 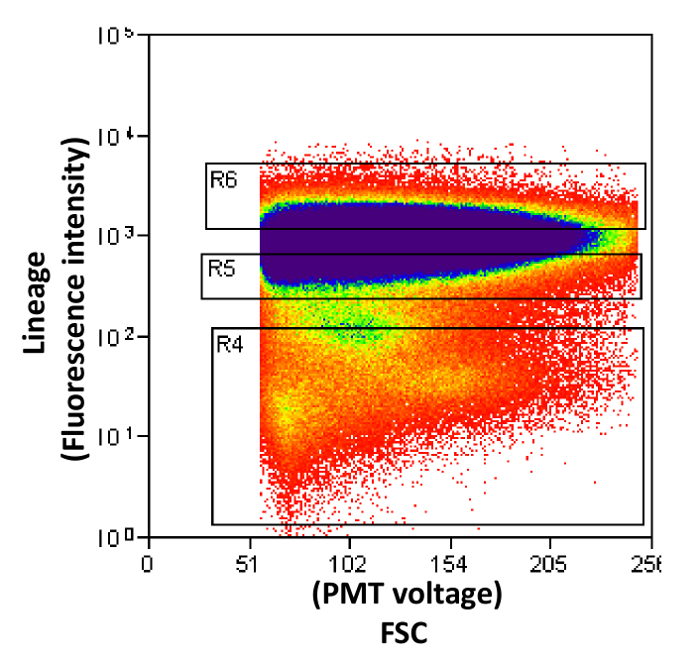 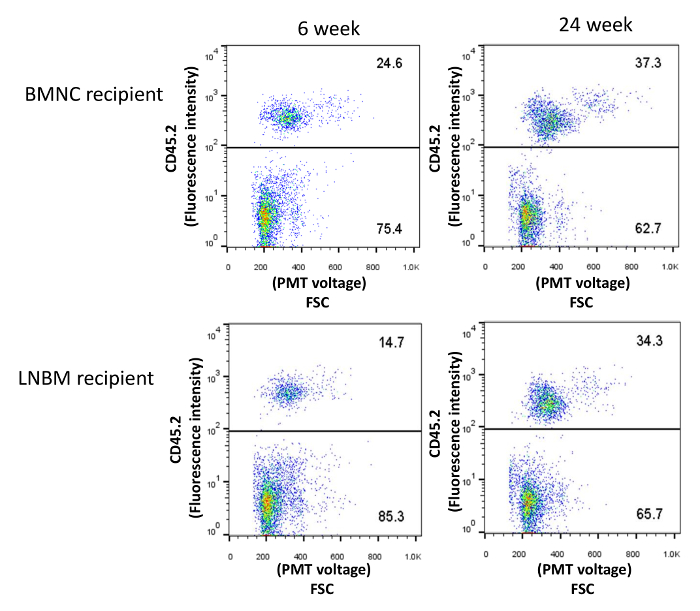 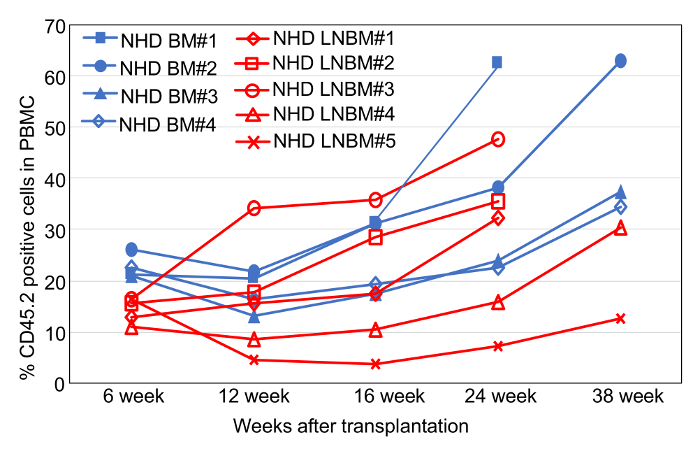 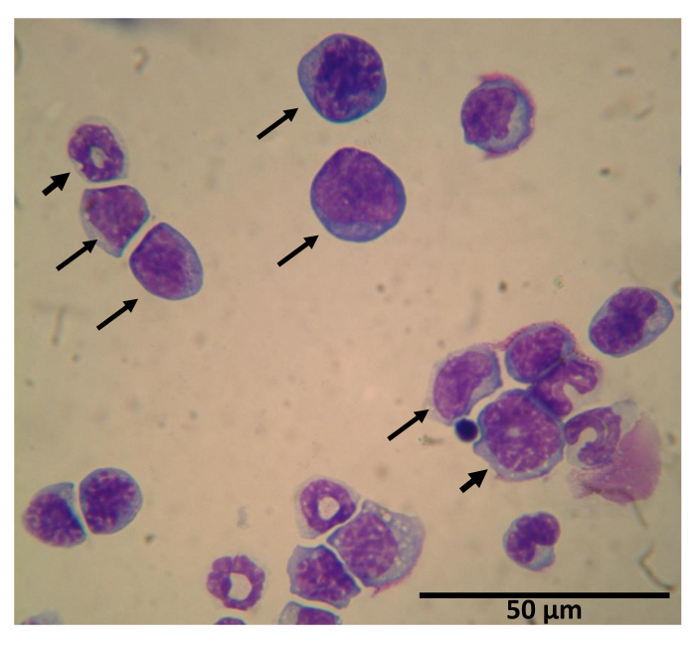 Although MDS are a clonal hematopoietic stem cell disorder, the MDS "stem", or initiating cells, have not yet been characterized. We previously demonstrated that MDS can be transplantable to WT mice using bone marrow from NHD13 mice by HSCT, characterized by macrocytic anemia, leukopenia, neutropenia, and morphologic evidence of dysplasia15. In addition, competitive repopulation assays identified a growth advantage of cells from the NHD13 MDS bone marrow. Taken together, these findings imply the existence of an MDS stem or initiating cell. Additional experiments are now in progress, aimed at refining the immunophenotypic characteristics of an MDS initiating cell15 using more defined stem and progenitor cell markers (CD150, CD48, c-Kit and Sca-1)16 combined with the lineage marker staining method described in this protocol.

Identifying MDS initiating cells using NHD13 mice involves extensive flow cytometry sorting procedure. The ex vivo manipulation of primary BMNCs places stress on the cells, potentially resulting in cell death or functional loss. Therefore, efforts should be made to reduce the time of ex vivo manipulation including the time of flow cytometry sorting. The maker and model of flow cytometry instruments and flow dynamics are additional variables that may affect cell viability after sorting. The HSCT procedure requires cell infusion through a blood vessel. Although tail vein injection may be a more challenging technique than retro-orbital injection, in our experience, tail vein injection can be performed more rapidly than retro-orbital injection as the recipient mice are not anesthetized for the tail vein injections. Limitation of injection volume (maximum 150 µL) is another issue in retro-orbital injection17, as a higher cell concentration may lead to additional loss of cells in the course of cell preparation, such as shearing of cells on the wall of syringes and needles.

Although these experiments are focused on the NHD13 model for MDS, the HSCT sorting and transplant approaches described here can be used for any genetically engineered mouse. In addition to determining the characteristics of self-renewing hematopoietic cells, this transplant approach can be used for other purposes. For instance, if one desires to obtain a large cohort of mice with MDS bone marrow to assess the efficacy of treatment with a small molecule, a large cohort (30+ mice) can be generated by transplanting WT mice with MDS BM. Alternatively, the HSCT strategy can be reversed. In an attempt to cure mice of MDS, NHD13 mice with MDS can be transplanted with WT BM, and the success of the transplant can be monitored by assessing the proportion of hematopoietic cells that express CD45.1 (which marks WT BM) as opposed to CD45.2 (which marks MDS BM)18.

This work was supported by the Intramural Research Program of the National Cancer Institute, National Institutes of Health (grant numbers ZIA SC 010378 and BC 010983).