This protocol describes an efficient methodology for the extraction and quantification of caffeine in cell suspensions of C. arabica L. and an experimental process for evaluating the enzymatic activity of caffeine synthase with the expression level of the gene that encodes this enzyme.

Caffeine (1,3,7-trimethylxanthine) is a purine alkaloid present in popular drinks such as coffee and tea. This secondary metabolite is regarded as a chemical defense because it has antimicrobial activity and is considered a natural insecticide. Caffeine can also produce negative allelopathic effects that prevent the growth of surrounding plants. In addition, people around the world consume caffeine for its analgesic and stimulatory effects. Due to interest in the technological applications of caffeine, research on the biosynthetic pathway of this compound has grown. These studies have primarily focused on understanding the biochemical and molecular mechanisms that regulate the biosynthesis of caffeine. In vitro tissue culture has become a useful system for studying this biosynthetic pathway. This article will describe a step-by-step protocol for the quantification of caffeine and for measuring the transcript levels of the gene (CCS1) encoding caffeine synthase (CS) in cell suspensions of C. arabica L. as well as its activity.

Caffeine is a secondary metabolite that is biosynthesized by plants of the genus Coffea1. This alkaloid belongs to the methylxanthine family and is regarded as a chemical plant defense because it can act against the adverse effects of pathogens and herbivores2,3. In addition, this metabolite is responsible for the stimulating properties of the coffee drink, which is commonly consumed worldwide4,5. Due to its properties, several research groups are interested in studying the biosynthetic pathway and catabolism of caffeine6,7. Currently, plant in vitro cell/tissue cultures serve as an alternative for evaluating caffeine accumulation under various biotic and abiotic strategies8,9.

Caffeine biosynthesis involves the hydrolytic release of 7-methylxanthine from the corresponding ribose nucleoside followed by ordered N-methylations at positions 3 and 1. A specific S-adenosyl methionine (SAM)-dependent N-methyltransferase (NMT) catalyzes the methylation at position 7, whereas theobromine synthase (TS) and CS are involved in the 3- and 1-methylations, respectively, producing theobromine and caffeine. The study of genes encoding distinct NMTs has allowed understanding the mechanism that regulates caffeine production10,11. CS, which has N-methyltransferase activity, catalyzes the last two steps of the biosynthetic pathway of caffeine11. In coffee tree seedlings, it has been shown that light radiation can increase CS activity, which results in an increase in caffeine biosynthesis. Recently, we showed that the maintenance of cell suspensions of C. arabica L. under light irradiation is the optimal condition for evaluating the effects that produce abiotic stress factors impacting the biosynthetic pathway of caffeine8. The information obtained in these studies may have applications in metabolic engineering and systems biology for maximizing the study of the caffeine biosynthetic pathway in such in vitro systems.

Given the advantages of obtaining a suitable model for the study of caffeine biosynthesis, we optimized the extraction conditions for caffeine on cell suspensions of C. arabica L. It was also possible to develop a useful protocol for studying the enzymatic activity as well as methodological steps for assessing the level of gene transcripts of Coffea caffeine synthase 1 (CCS1) encoding this enzyme. Herein, we report a protocol to extract and quantify caffeine in C. arabica cell suspensions by thin-layer chromatography and densitometry (TLC-densitometry).

2. Conditions for the Assessment of Caffeine by Thin Layer Chromatography (TLC)-Densitometry

Caffeine extracts obtained via the process presented here were analyzed by TLC-densitometry by subjecting the samples to plate chromatography according to the scheme shown in Figure 1. To quantify the levels of caffeine in the cell extracts, a curve with various concentrations of commercial standard for this compound was used (Figure 2A). The pattern of absorbance for caffeine was analyzed in the visible light spectrum (UV-VIS) using a maximum absorption peak at 273 nm (Figure 2B), and the peak separation of caffeine on the TLC plate showed a Rf between 0.34 and 0.39 (Figure 2C).

The activity of caffeine synthase evaluated using this protocol indicated a specific activity for this enzyme of 1.2 pkat (Table 1). This enzyme's activity was similar to that reported by other authors who used purified protein.

The first step before evaluating the CCS1 gene expression was the isolation of high quality RNA. The quality of the extract of the total RNA derived from cell suspensions was evaluated, and the separation of 28S, 18S and 5S rRNA subunits was demonstrated, indicating that the RNA extracted from samples was of high quality (Figure 3A). However, these RNA extracts had to be treated with DNase enzyme to remove genomic DNA contamination (Figure 3B), which interferes with the preparation of cDNA. Subsequently, qPCR was performed using the protocol described above, and the result of the melt curve showed a single amplification product for the caffeine synthase gene (Figure 4).

Figure 1. Scheme used for application of the caffeine extract samples on a TLC plate. The scheme shows a silica plate dimension (6 x 10 cm) that is used to apply up to eight samples including caffeine extracts or standards. Consider a distance of 1 cm between samples in the TLC plate to obtain better resolution of the caffeine band separation. Please click here to view a larger version of this figure. 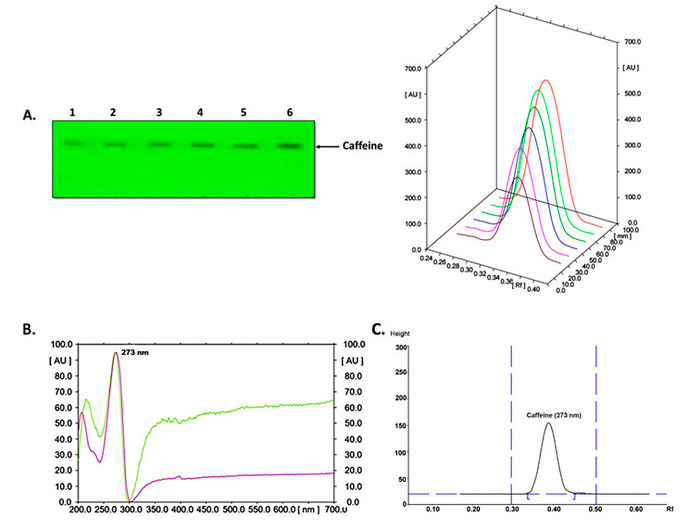 Figure 2. Detection of caffeine by TLC-densitometry in cell extracts of C. arabica L. (A) Separation of various caffeine standard concentrations (lane 1, 0.4; 2, 0.6; 3, 0.8; 4, 1; 5, 1.2; and 6, 1.4 µg) and separation of their peaks in the image on the right. (B) Absorbance patterns of a caffeine standard (purple line) and caffeine extract (green line) at different wavelengths using absorption spectra (ultraviolet and visible). (C) Peak separation of caffeine in the cell extract. Please click here to view a larger version of this figure. 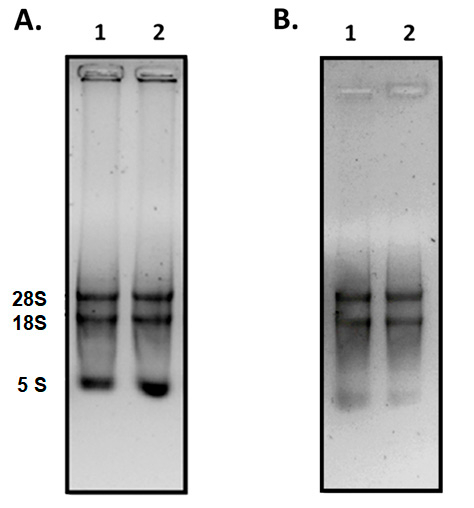 Figure 3. Extraction of the total RNA. The RNA extracts of cellular suspensions of C. arabica L. were analyzed by electrophoresis. (A) RNA extraction, (lanes 1-2 duplicates); (B) RNA samples subjected to treatment with DNase. 1% agarose gels were prepared and stained with 3x intercalating nucleic acid stain solution. Please click here to view a larger version of this figure. 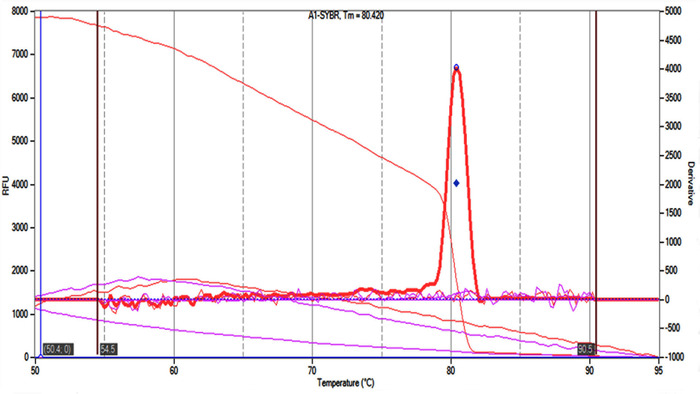 Figure 4. Melting curve produced using qPCR software and RT-qPCR data. The curve marked in red is a single amplified product that corresponds to the caffeine synthase gene. Please click here to view a larger version of this figure.

Table 1. Comparison of the CS-specific activity in different crops.

We present here the optimal conditions for evaluating the caffeine content, CS activity and transcript levels in an in vitro plant tissue culture, such as cell suspensions of C. arabica. Previous reports have confirmed that maintaining cells under light irradiation and in the presence of theobromine in the culture medium are suitable parameters for increasing the level of caffeine, making it possible to evaluate the caffeine separation methods using reversed-phase high-performance liquid chromatography (RP-HPLC). Currently, there are few reports that use a simple and rapid method with economic advantages for studying caffeine biosynthesis in cell suspensions. Here, an alternative assessment showed a separation method for caffeine using TLC-densitometry, which is efficient for the quantitative analysis of caffeine in cell extracts. To evaluate caffeine in the cells, it was not necessary to feed theobromine to the culture cells as reported previously14,15.

Caffeine synthase activity has been evaluated in several plant tissues, including the endosperm, leaves and seeds. In these studies, the methods for the determination of caffeine synthase activity included a step of partial protein purification that suggested that it was necessary to use the purified enzyme16,17. Here, we performed an optimal protocol for the study of the CS enzymatic activity using a soluble protein extract without the need for steps involving the purification of the protein. CS activity in the crude extract of cell suspensions can be measured in units of pkat, as other authors have reported. We evaluated the caffeine levels and enzymatic activity in leaves, and they have similar levels to those in in vitro culture.

Finally, although previous authors have studied the expression of caffeine synthase, several have used differentiated tissue culture6,18. The methodology presented here is useful to obtain an RNA extract and to evaluate the expression levels of the gene CCS1 by RT-qPCR in different in vitro models of plant cell suspensions, such as tea and cocoa.

The work of our laboratory was funded by a grant from the Consejo Nacional de Ciencia y Tecnología (CONACyT 219893) to SMTHS. This research was also supported by a fellowship granted to RJPK (No. 37938) by CONACyT and the Sistema Nacional de Investigadores (4422). The authors thank CIATEJ for the use of its installations during the writing of this manuscript. Special thanks are extended to Dr. Víctor Manuel González Mendoza for all recommendations in the molecular biology section and Valentín Mendoza Rodríguez, IFC, UNAM for the facilities during the filming of this article.