We present a protocol to build molecular shuttles, where surface-adhered kinesin motor proteins propel dye-labelled microtubules. Weak interactions of the kinesins with the surface enables their reversible attachment to it. This creates a nanoscale system which exhibits dynamic assembly and disassembly of its components while retaining its functionality.

This protocol describes how to create kinesin-powered molecular shuttles with a weak and reversible attachment of the kinesins to the surface. In contrast to previous protocols, in this system, microtubules recruit kinesin motor proteins from solution and place them on a surface. The kinesins will, in turn, facilitate the gliding of the microtubules along the surface before desorbing back into the bulk solution, thus being available to be recruited again. This continuous assembly and disassembly leads to striking dynamic behavior in the system, such as the formation of temporary kinesin trails by gliding microtubules.

Several experimental methods will be described throughout this experiment: UV-Vis spectrophotometry will be used to determine the concentration of stock solutions of reagents, coverslips will first be ozone and ultraviolet (UV) treated and then silanized before being mounted into flow cells, and total internal reflection fluorescence (TIRF) microscopy will be used to simultaneously image kinesin motors and microtubule filaments.

The interactions governing the behavior of active nanosystems have always been characterized by long-lived, nearly irreversible bonds1,2,3,4,5,6,7,8. A well-studied example of this is the microtubule-kinesin system, where gliding microtubules are propelled by irreversibly surface-bound kinesin motors1,2,3,4,5. Systems in which the components are reversibly connected to one another have been studied theoretically9,10 and achieved at the macroscale11,12, but scaling these systems down to the nanoscale has been challenging. One of the major reasons for this is that breaking and reforming bonds between components often requires a large change in the environmental conditions. Even though such changes have been implemented in the past13,14,15, they would rely on modifying the system itself rather than adapting it to its environment. Designing molecular-scale systems in which components continually assemble and reorganize into structures without disturbing the overall environment in which the experiments take place will open the door to the exploration of a wide range of dynamic behaviors16,17.

Here, we describe and demonstrate the detailed protocol for creating a dynamically assembling and disassembling system functioning at the nanoscale. The system and its general behavior has been introduced earlier18: microtubule filaments are propelled by tracks of reversibly surface-bound kinesin-1 motors. These kinesin motor proteins are recruited from the solution to help propel microtubules forward, before desorbing again shortly afterwards. Once back in solution, they can be recruited again to propel a new microtubule. In the past13,14,15, the breaking and reforming of bonds required environmental modifications; in contrast, the environment of our flow cell remains unchanged while the kinesin motors interact with the surface.

This protocol will help interested researchers to (1) visualize all the steps of the protocol, and (2) assist with troubleshooting this type of assay. It has been derived from the procedures described in Howard et al. 199319.

CAUTION: Three of the reagents used in this protocol (toluene, dimethyldichlorosilane, and dithiothreitol) are highly toxic. Please consult the relevant material safety data sheets (MSDS) before use. Furthermore, parts of this protocol need to be performed under a higher level of protection, wearing safety glasses and two sets of protective gloves as indicated. Unless otherwise advised, the experiments can be performed on lab benches while using all the appropriate personal protective equipment (safety glasses, gloves, lab coat, full length pants, and closed-toe shoes).

3. Flowing the solutions into a flow cell

In these experiments, we used a 1,000 times dilution of the microtubules prepared in section 1.3.2. The kinesin concentration was 20 nM, and the ATP concentration was 1 mM. Imaging was performed using TIRF microscopy. Gliding microtubules were separately imaged from the kinesin motors: microtubules were visible upon excitation with a 647 nm laser (Figure 1, red), and the GFP-kinesin was visible when excited with a 488 nm laser (Figure 1, green). The time between excitation with the red and green light was less than 1 s. The time between frames was 10 s. Microtubules displayed stable gliding. The average microtubule gliding velocity was approximatively 800 nm/s. The microtubule surface density was 400 mm-2. Tracks of kinesin (green) appeared to extend beyond the trailing end of the microtubules (red) for several micrometers. 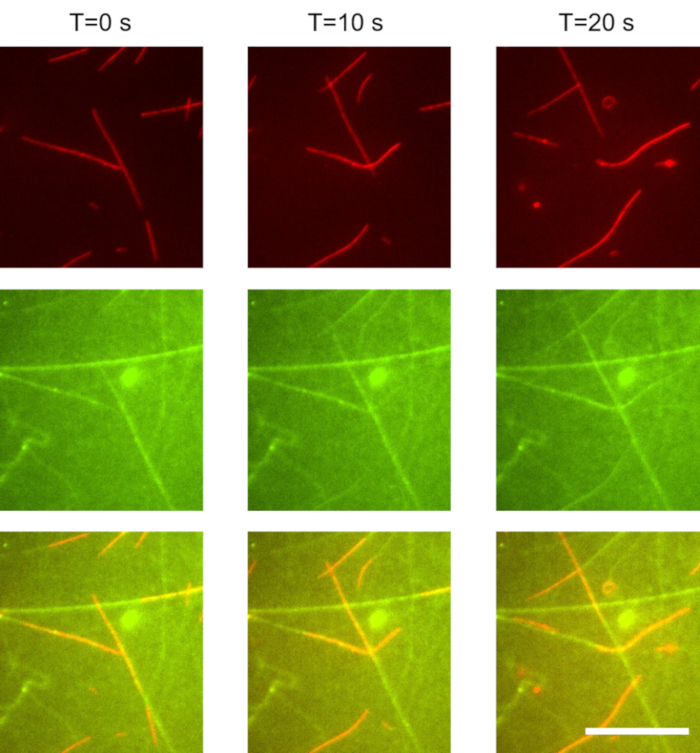 In this work, we present an active nanoscale system which self assembles weakly-binding building blocks to construct its own track. As shown in Figure 1, gliding microtubules accumulate kinesin motors from solution and deposit them on the surface. The kinesin motors remain in the wake of the microtubule for a short period of time before returning to solution. Thus, in this experiment, kinesin motors alternate between 3 states:

(1) A microtubule single-bound state: this is when a kinesin first binds to a microtubule. It exists in equilibrium with state (2).

(3) A single surface-bound state: a double-bound kinesin that has walked off the end of the microtubule and has not yet desorbed from the surface is in this state. These motors can be observed in Figure 1 (combined and green channels): they extend behind the tail of the microtubule for several micrometers and form its diminishing trail.

The most critical step of this protocol is the formation of the hydrophobic surface on the slide. Not only does it use dangerous chemicals, but it also allows the PEG-PPG-PEG functionalized with the NTA group to coat the surface, which then allows the kinesin to reversibly bind to the surface. Another important step is sealing the flow cell with grease. This allows for prolonged imaging without the liquid in the flow cell evaporating.

A possible limitation of this technique is that, due to the large active kinesin content of the system, the ATP can be rapidly consumed, and experiments may last less than an hour in certain conditions. This would for example be the case if one used a twofold higher kinesin concentration and five-fold higher microtubule concentration than what is presented in this protocol.

The presented protocol paves the way for a more efficient use of protein motors in nanoscale engineered systems and for further investigation in the design of active nanosystems that are in dynamic equilibrium. Furthermore, the dynamic nature of this system allows it to serve as a model system for studying self-healing and dynamic replacement of molecular components, closing part of the gap between engineered and natural structures.

The authors gratefully acknowledge financial support under NSF grant NSF-DMR 1807514. The authors thank G. Bachand and V. Vandelinder for providing the GFP-kinesin protein. This work was performed, in part, at the Center for Integrated Nanotechnologies, an Office of Science User Facility operated for the US Department of Energy (DOE) Office of Science by Los Alamos National Laboratory (contract no. DE- AC52-06NA25396) and Sandia National Laboratories (con- tract no. 97 DE-AC04-94AL85000). The authors thank Dr. Jennifer Neff and AllVivo Vascular for their gift of PEG-PPG-PEG functionalized with NTA.