Mitochondria are multifunctional organelles playing an important role in energy production, regulation of cellular metabolism, signaling, apoptosis, aging, etc.1,2,3. The energy production in mitochondria relies on the oxidative phosphorylation function that couples respiration with ATP synthesis. In human cells, the mitochondrial oxidative phosphorylation system (OXPHOS) is composed of five complexes. Complexes I-IV create an electrochemical proton gradient in the mitochondrial intermembrane space that is used by complex V to produce ATP. Each OXPHOS complex is multimeric and, except complex II, composed of the subunits encoded by both nuclear and mitochondrial genes. Any defects in the core components of the OXPHOS complexes caused by mutations or environmental stress can perturb the assembly and functionality of the oxidative phosphorylation system. In addition, the proper assembly of functional OXPHOS complexes requires a large number of assembly factors4,5,6.

The method described here with some modifications can be applied to any cultured cells. In addition, this method can be used for analysis of OXPHOS complexes in mitochondria isolated from tissue samples9. BN-PAGE requires at least 5-10 µg of mitochondria for each sample per run. Using the method described here, 500,000 cultured cells such as HEK293, SH-SY5Y or 143B cells can yield approximately 10 µg of mitochondria. However, a sufficient amount of the cells for the BN analysis depends on the specific cell type.

The most common method to study mitochondrial OXPHOS proteins is SDS-PAGE and western blotting. However, SDS-PAGE allows studying only individual OXPHOS subunits and, in contrast to BN-PAGE, cannot be used to evaluate the assembly of entire OXPHOS complexes. Clear native-PAGE separates protein complexes in native conditions without the presence of negatively charged dye and has a significantly lower resolution compared to BN-PAGE. However, clear native-PAGE is milder than BN-PAGE so it can retain labile supramolecular assemblies of protein complexes such as OXPHOS supercomplexes that are dissociated under the BN-PAGE conditions10. In this protocol, the gradient gel is used to separate complexes; however, alternatively, non-gradient separation can be used if the relatively expensive gradient maker is not available11.

Thus, BN-PAGE is the optimal method to investigate the assembly of individual OXPHOS complexes. For example, some mitochondrial disorders, such as Leber hereditary optic neuropathy (LHON), mitochondrial encephalopathy with lactic acidosis and stroke-like episodes (MELAS), are associated with altered assembly of one or more components of the OXPHOS system5. By using the BN-PAGE method described here, the molecular mechanisms of mitochondrial diseases can be studied.

spaNOTE: This protocol is based on an associated publication by Hilander et al.13 .

1. Preparation of buffers and solutions

3. Preparation of gradient gel for BN-PAGE

Using BN-PAGE, defects in the assembly of mitochondrial OXPHOS complexes can be investigated. Figure 1A shows the assembly of respiratory chain complexes in human neuroblastoma cells (SH-SY5Y) treated with chloramphenicol, which specifically inhibits translation of mtDNA-encoded OXPHOS subunits. Chloramphenicol depleted the OXPHOS complexes that contained mitochondrially-encoded subunits (complex I, III, IV; Figure 1A), while complex II, which is exclusively encoded by nuclear genes, was compensatorily upregulated. Complex V was not immunoblotted here.

The quality of the gel is important for sharp and clear bands. Figure 1C shows an immunoblot from a gel that did not polymerize well. Stripping of the membrane also can affect the detection of OXPHOS complexes. In Figure 1D, complex I was detected before or after stripping. The signal to noise ratio is much lower after stripping. 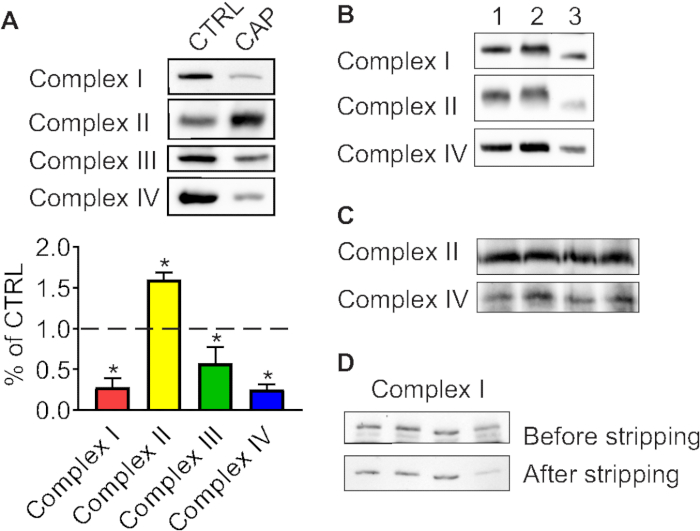 Figure 1. BN-PAGE immunoblots from successful and sub-optimal experiments. (A) Depletion of OXPHOS complexes by inhibitor of mitochondrial translation. Human neuroblastoma cells (SH-SY5Y) were treated with chloramphenicol (CAP) for 48 hours. CTRL, control cells without chloramphenicol treatment. The lower panel shows the quantification of the immunoblot. The value of the control is taken as 1 (shown as a dashed line). Data are presented as mean ± SD, n = 3, *P < 0.0001 as compared to control using unpaired Student’s t-tests. (B) Disruption of OXPHOS complexes by multiple freeze-thaw cycles. Samples 1-3 were prepared from human osteosarcoma cells (143B) in the same conditions. Samples number 1 and 2 were frozen and melted only once, while the sample number 3 underwent four freeze-thaw cycles. (C) BN-PAGE immunoblots of OXPHOS complexes isolated from HEK293 cells. The smearing of the bands is caused by low quality of the gel. (D) Effect of stripping on the detection of OXPHOS complexes. Detection of Complex I in human neuroblastoma cells (SH-SY5Y) before and after stripping of the same membrane. OXPHOS complexes were detected using anti-NDUFA9 antibody (complex I), anti-SDHA antibody (complex II), anti-UQCRC2 antibody (complex III) and anti-COX1 antibody (complex IV). Please click here to view a larger version of this figure.

Table 2. Recipes of gel for BN-PAGE.

One of the most critical parts of the protocol is to preserve intact OXPHOS complexes during sample preparation, storage and gel electrophoresis. Thus, mitochondria should be isolated at +4 °C and the samples should not undergo freeze-thaw cycles. OXPHOS complexes can only tolerate one freeze-thaw cycle during the whole procedure. Multiple freeze-thaw cycles destroy OXPHOS complexes (Figure 1B). Control and experimental samples that are to be compared should be prepared in parallel to avoid any differences in storage conditions, which might give misleading results. If it is not possible to perform all the steps of the protocol in parallel with all the samples, we recommend to freeze washed cell pellets at -80 °C (step 1.4 in this protocol) and later carry out the rest of the protocol for all the samples together at least until gel electrophoresis. Special attention should be paid to the cleanliness of the electrophoresis apparatus (tank, cassette). If the same apparatus is used for SDS-PAGE, wash it very well before BN-PAGE. Any residual SDS can cause dissociation of the OXPHOS complexes during electrophoresis.

High-quality gradient gels are another critical part of the protocol. Precast gels for blue native PAGE are commercially available; however, it is not recommended to use them, since the buffers used for commercial gels might have a composition, which is different from the sample buffers. The gradient of the gel used here (6-15%) is optimal for separation of individual OXPHOS complexes. To detect higher-order supramolecular structures of OXPHOS, also known as respiratory chain supercomplexes14, some optimization is required11.

For the visualization of OXPHOS complexes use the specific antibodies sequentially, based on their properties. For example, use first the antibody that gives the weakest signal and the antibody with the strongest signal last. This is important since the stripping weakens the detection (Figure 1D). The composition of respiratory chain complexes can be investigated if after BN-PAGE the gel is subjected to the second dimension SDS-PAGE15.

This protocol does not include protein loading control on the immunoblot; therefore, the protein concentration of extracted complexes should be carefully measured at least in triplicates to ensure equal loading. In addition, the samples can be run in BN-PAGE in replicates. If the assembly of selective OXPHOS complexes is impaired, unaffected complexes can serve as loading controls.

The estimation of the molecular mass of the protein complexes in the BN-PAGE is challenging18. The current protocol does not include the molecular weight marker; therefore, to estimate the assembly of the OXPHOS complexes, the control samples containing unaffected complexes should always be included in the analysis. The control samples for BN-PAGE are usually untreated or wild type cells.

The method presented here is optimized for the detection of mitochondrial respiratory chain complexes; however, it can also be applied for the evaluation of oligomerization of mitochondrial proteins19. In addition, the assembly rate of OXPHOS complexes can be studied by first depleting mitochondrial-encoded subunit containing complexes by chloramphenicol and then following their recovery after removal of chloramphenicol10. Thus, BN-PAGE can be used to evaluate steady-state levels and assembly of OXPHOS for different applications including molecular diagnostics of human mitochondrial disorders9,11.

Helsinki University Library is thanked for the financial support in publishing.