Tumor microenvironment is an essential part of cancer growth and invasion. To mimic carcinoma progression, a biologically relevant human matrix is needed. This protocol introduces an improvement for the in vitro three-dimensional spheroid invasion assay by applying a human leiomyoma-based matrix. The protocol also introduces a computer-based cell invasion analysis.

Two-dimensional cell culture-based assays are commonly used in in vitro cancer research. However, they lack several basic elements that form the tumor microenvironment. To obtain more reliable in vitro results, several three-dimensional (3D) cell culture assays have been introduced. These assays allow cancer cells to interact with the extracellular matrix. This interaction affects cell behavior, such as proliferation and invasion, as well as cell morphology. Additionally, this interaction could induce or suppress the expression of several pro- and anti-tumorigenic molecules. Spheroid invasion assay was developed to provide a suitable 3D in vitro method to study cancer cell invasion. Currently, animal-derived matrices, such as mouse sarcoma-derived matrix (MSDM) and rat tail type I collagen, are mainly used in the spheroid invasion assays. Taking into consideration the differences between the human tumor microenvironment and animal-derived matrices, a human myoma-derived matrix (HMDM) was developed from benign uterus leiomyoma tissue. It has been shown that HMDM induces migration and invasion of carcinoma cells better than MSDM. This protocol provided a simple, reproducible, and reliable 3D human tumor-based spheroid invasion assay using the HMDM/fibrin matrix. It also includes detailed instructions on imaging and analysis. The spheroids grow in a U-shaped ultra-low attachment plate within the HMDM/fibrin matrix and invade through it. The invasion is daily imaged, measured, and analyzed using ilastik and Fiji ImageJ software. The assay platform was demonstrated using human laryngeal primary and metastatic squamous cell carcinoma cell lines. However, the protocol is suitable also for other solid cancer cell lines.

Several 3D cell culture models are used in cancer research such as tumor tissue explant, tumor on a chip, and multicellular tumor spheroids3,4. Multicellular tumor spheroids are now widely used, as they mimic several features of the in vivo conditions in human tumors1,5. When the spheroid diameter is greater than 500 μm, it even has hypoxic regions and a necrotic center, representing thus the in vivo tumor situation2.

Many synthetic (e.g., polydimethylsiloxane) and animal-derived (e.g., rat tail type I collagen and mouse sarcoma-derived matrix, Matrigel, referred to as MSDM) matrices have been developed for 3D cell culture assays3,6,7,8. Thus far, none of the commercially available matrices have originated from human tumor tissue. Therefore, they lack the features of the human tumor microenvironment, which has significant effects on cancer cell invasion processes8.

Myogel (human myoma-derived matrix, referred to as HMDM) is extracted from human uterus leiomyoma tumor tissue9. It has been shown that the protein content of HMDM differs significantly from that of MSDM. In fact, 66% of HMDM proteins are different from MSDM proteins. On the other hand, some proteins, such as laminin, type IV collagen, heparan sulfate proteoglycans, nidogen, and epidermal growth factor, are present in both matrices10. Additionally, the mouse differs from the human in enzyme contents, with humans having 78 fewer proteases than mice11.

Fibrin has been widely used alone or in combination with other materials as a scaffold material12. In 3D cell culture assays, commercially available human fibrinogen and thrombin are combined to form a fibrin hydrogel12.

NOTE: The protocol is demonstrated here with UT-SCC-42A and -42B cell lines but it could also be applied using other cell lines.

NOTE: Prepare 2x solution because the gel will be diluted 1:1 when added into the wells.

Once embedded, cells in the HMDM/fibrin matrix started to invade rapidly after one day and extended into the matrix (Figure 4A). Cells in the MSDM did not invade into the surrounding matrix, instead forming an asymmetrical structure (Figure 4B). On the other hand, cells in the collagen invaded slightly, but due to the matrix shrinkage the analysis was difficult (Figure 4C). In some collagen wells, the spheroids even disappeared after three days (Figure 4C).

Figure 5 illustrates the quantification of the cell invasion in HMDM/fibrin of the primary laryngeal SCC cell line UT-SCC-42A and the corresponding metastatic cell line UT-SCC-42B. The video (Movie 1) taken using a live-cell analysis system of the HMDM/fibrin spheroid shows the movement of the SCC cells within the matrix where they form strands followed by the other cells. 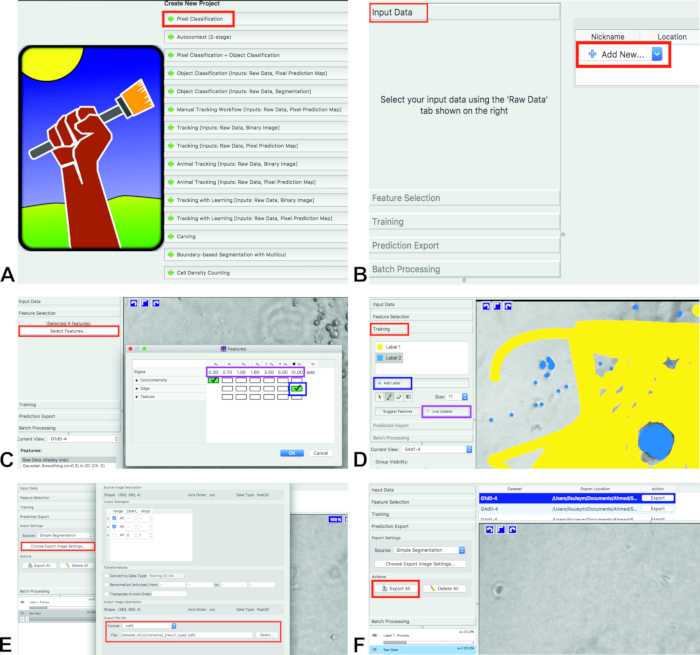 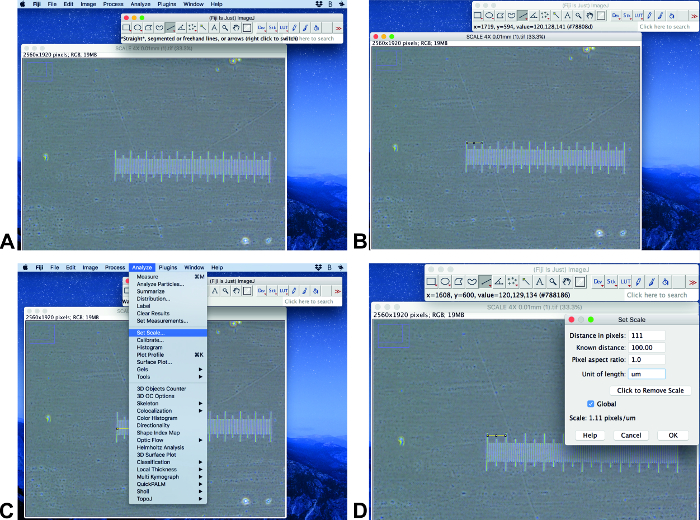 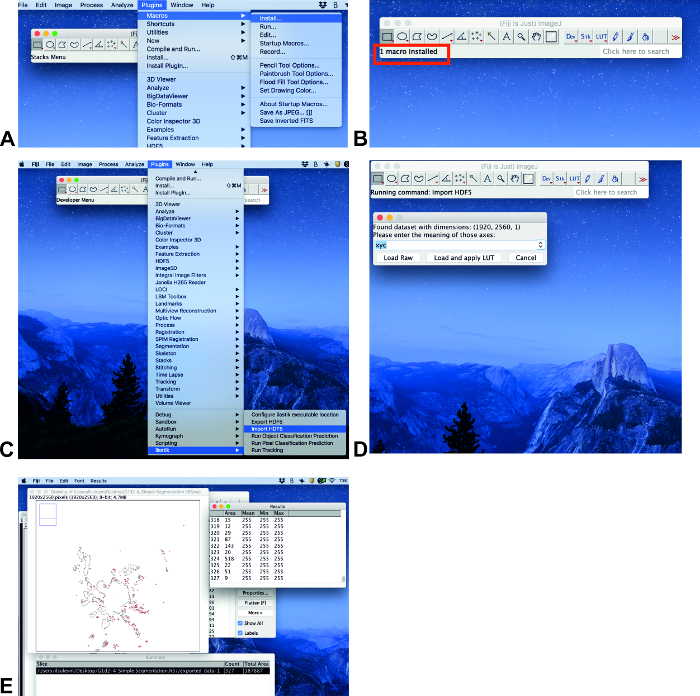 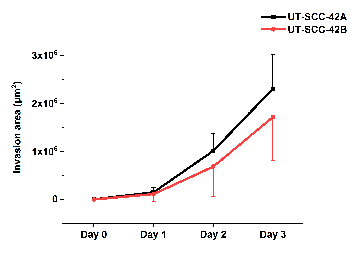 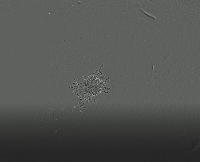 Video 1: SCC cell movement within the HMDM/fibrin for three days. Please click here to view this video. (Right-click to download.)

The presented method provides a 3D human tumor-based assay to evaluate the invasiveness of cancer cells within human tumor microenvironment mimicking matrix. Cancer cell invasion can be easily measured by daily imaging with a standard microscope and by using image analysis software. The method demonstrates cell invasion rather than merely proliferation.

Unlike MSDM, the HMDM/fibrin matrix does not require any temperature control. This method is easy to perform, in particular without the need to transfer the spheroids from one plate to another. It has only one technically sensitive step, the addition of fibrinogen to the matrix. Since fibrinogen starts to gel after a few minutes, adding fibrinogen requires robust pipetting and treatment of only a few wells at a time. There is also a risk of disturbing the spheroid and moving it from its central position in the U-shaped well if pipetting is done in a high-pressure manner. Dislocation of the spheroid can complicate imaging and eventually the analysis.

The assay can be modified by altering the concentration of HMDM or fibrinogen. The cells can also be fixed and stained for subsequent molecular studies. Even though this method can be modified to a fully automated form, it can also be carried out with a normal microscope and two open source software, with no need for costly equipment.

Compared to the traditional MSDM-based 3D assays, this assay could display better the cell invasion properties. Spheroids grown in a basement membrane-containing laminin-rich matrix, such as MSDM, might have more proliferation of cancer cells than actual invasion, rendering it unsuitable for invasion assays in several cancer cell lines due to their low invading capacity. Another frequently used matrix, type I collagen, tends to shrink from the edges during 3D cultivation, which affects spheroid localization and imaging of the wells. Additionally, the differences between the intrinsic invasive properties of the more (HSC-3) and less (SCC-25) aggressive tongue carcinoma cell lines have been demonstrated using human tumor microenvironment mimicking models (myoma discs and its soluble form matrix)10,13.

The assay is also more ethical than using MSDM since HMDM is extracted from the leftover material of human leiomyoma tumor. Currently, HMDM is the only available human tumor-derived ECM product that appears to be suitable for many cancer-related in vitro assays8,10. In the future, animal tissue-derived matrices could be replaced by human tumor-based matrices to reduce the need to sacrifice animals for matrix production.

Replacing 2D cell culture assays with 3D methods provides more accurate information on cancer cell behavior. Currently, there are several 3D models and commercial matrices, but, unfortunately, none are suitable for all cancer cell lines. Researchers should select the most suitable matrix for their particular assay. Optimal matching of assay and matrix can be challenging, but it could significantly increase the reliability of the results.

The authors thank the funders of this study: the Sigrid Jusélius Foundation, the Cancer Society of Finland, and Helsinki University Central Hospital research funds. The authors acknowledge the Biomedicum Imaging Unit at the University of Helsinki for technical help.