We describe an in vivo method to investigate the functional loss of a specific gene in satellite cells by using a combination of cardiotoxin mediated injury of skeletal muscle and the injection of a self-delivering siRNA.

Skeletal muscle is the body’s largest tissue representing approximately 40% of total body weight enabling voluntary locomotion. The tissue architecture of skeletal muscle is mainly composed of postmitotic, terminally differentiated, multinucleated myofibers as well as various other cells from the peripheral nervous system, vascular system, and interstitial cells1. Importantly, skeletal muscle has a tremendous capacity to regenerate and restore function upon injury or damage2. This process depends on the tissue resident muscle stem cells also called satellite cells3,4. Satellite cells are located between the myofiber and the basal lamina and characterized by the expression of the transcription factor Pax75,6,7. Under homeostatic conditions, satellite cells are quiescent but get activated due to traumatic injury, e.g., through eccentric exercise or experimentally through injection of the snake venom cardiotoxin6,8. Once activated, Pax7 positive satellite cells co-express MyoD and Myf5, which commits the stem cells to myogenic differentiation. Satellite cells that resist the upregulation of commitment factors will retain their stemness potential and return to quiescence to replenish the stem cell pool for future demands. After the expansion of the myogenic progenitor pool, transcriptional networks are activated by differentiation factors like Myogenin to initiate the cell cycle exit and terminal differentiation. These myoprogenitors then fuse to each other or to existing myofibers contributing myonuclei to maintain the size of the myonuclear domain. The myofibers express terminal muscle differentiation genes like Myosin Heavy Chain. Finally, the newly formed myofibers grow and mature to build the functional units of skeletal muscle9,10.

Here we introduce a specific experimental mouse injury model to study the stem cell mediated regeneration of cardiotoxin-induced damage of the tibialis anterior muscle in vivo. Cardiotoxin, a snake derived cytolytic toxin that causes myofiber depolarization and necrosis, is injected into the tibialis anterior muscle, which in turn will trigger tissue degeneration followed by regeneration. To analyze the function of genes during acute regeneration, self-delivering siRNAs are injected at day 3 after injury, at the peak of the satellite cell expansion. Experimental animals are sacrificed at various timepoints and the tibialis anterior muscles are collected. The dissected muscles are frozen and processed for further cryo-sectioning. Immunofluorescence microscopy is then used to analyze markers of regeneration. This method allows for the investigation of the function of a single gene during satellite cell driven regeneration of skeletal muscle using wild type mice.

5. Immunostaining for Markers of Regeneration

A typical result of a hematoxylin and eosin (H&E) staining of a tibialis anterior muscle before and after cardiotoxin mediated injury is presented in Figure 4A,B. In the control muscles, the architecture of the muscle is intact as seen by the localization of the nuclei in the periphery of the myofibers and the lack of accumulation of mononucleated cells in the interstitial space (Figure 4A). 7 days after cardiotoxin mediated injury new myofibers are formed marked by centrally located nuclei (Figure 4B). Furthermore, an accumulation of mononucleated cells can be observed, consisting mostly of satellite cells but also non-myogenic cells like immune cells. The whole muscle should be injured characterized by the central location of all myonuclei and the accumulation of mononucleated cells on the whole muscle section. 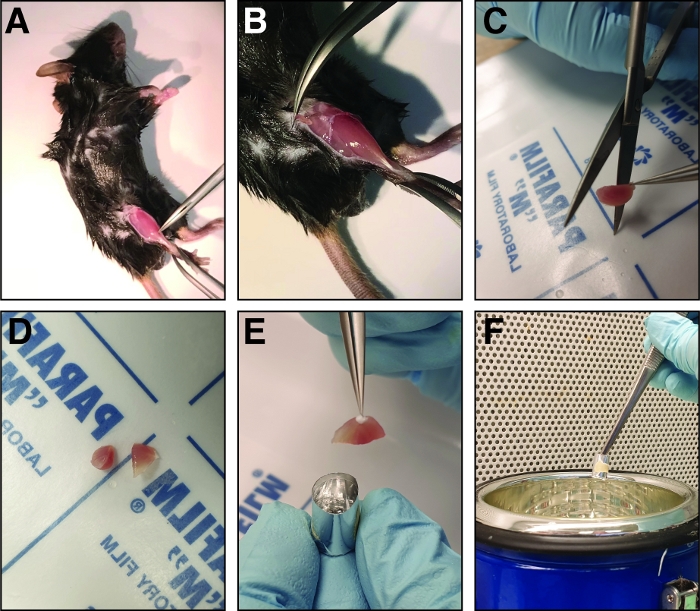 Figure 2: Steps involved in dissection and freezing of the injured tibialis anterior muscle. (A) The hind limb muscles are exposed (B) and the fascia surrounding the tibialis anterior muscle is ripped to expose the muscle. (C) After removing the muscle, it is cut at the mid belly region into two halves of similar size using sharp straight scissors (D). (E) The halves of the dissected muscle are embedded in an aluminum foil mold filled with freezing solution and frozen in liquid nitrogen (F). Please click here to view a larger version of this figure. 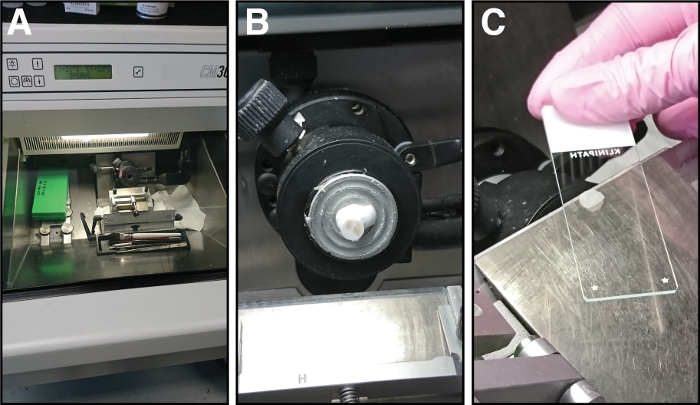 Figure 3: Equipment and steps involved in cryosectioning of tibialis anterior muscles. (A) The chamber temperature of the cryostat is set to -21 °C. (B) The tibialis anterior muscle in the freezing solution is mounted on the sample holder. (C) Sections of 14 µm thickness are attached to glass microscope slides. Please click here to view a larger version of this figure. 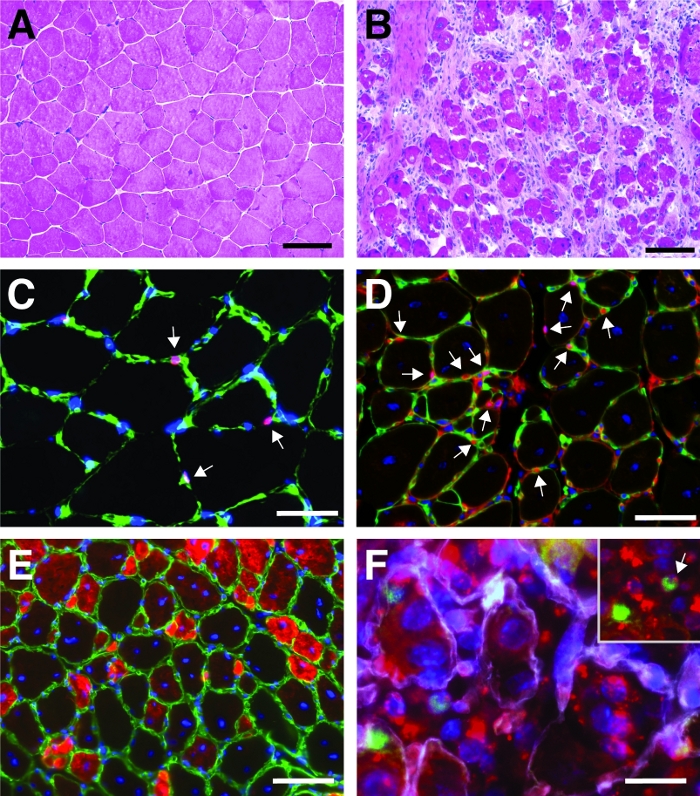 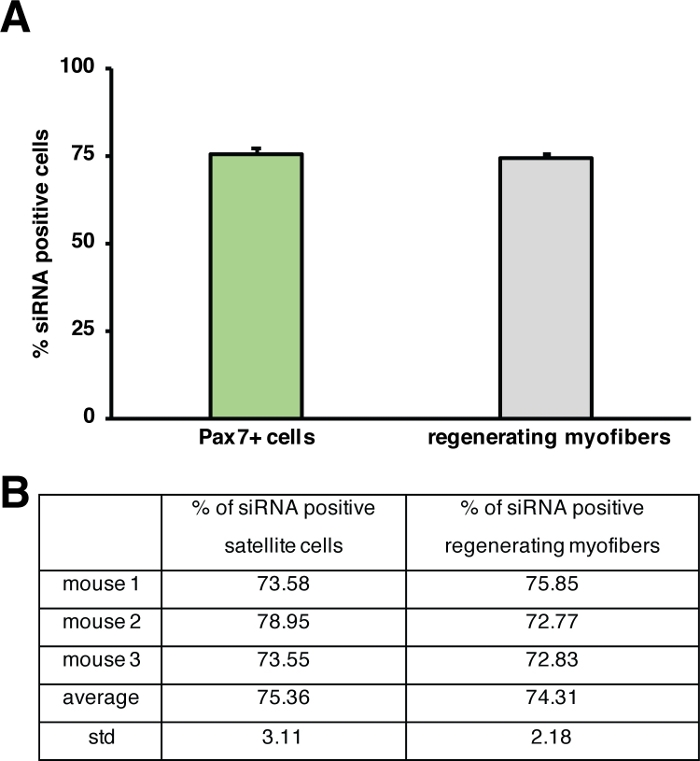 Figure 5: Quantification of uptake of fluorescently labeled siRNA. (A) Quantification of siRNA uptake by satellite cells (Pax7+ cells) and regenerating myofibers 2 days after injection into regenerating skeletal muscle. Injection was performed at day 3 after cardiotoxin mediated injury. n = 3, error bars show SEM. (B) Quantification underlying the graph depicted in (A). Please click here to view a larger version of this figure.

The function of satellite cells can be investigated by various experimental procedures including their culture on the adjacent isolated single myofibers17, by transplantation and by analyzing regeneration of skeletal muscle after induced injury18,19. Investigating the function of satellite cells by using an in vivo induced injury model, e.g., injection of cardiotoxin, provides the ability to analyze satellite cell function also in terms of their interaction with other cell types such as macrophages and investigation of the influence of systemic factors2. Injury of skeletal muscle can be accomplished by various means, e.g., eccentric exercise, freeze injury, injection of BaCl2 or injection of snake venoms such as cardiotoxin or notexin18. While eccentric exercise is probably the most physiological injury method, the injury to one particular muscle is only limited20. Freeze injuries can be applied when the migration of satellite cells towards the site of injury is the aim of the study or only a specific part of the muscle should be injured. Experimentally the disadvantage of freeze injuries is the open surgery which needs to be performed to apply the precooled metal probe. Injection of BaCl2 or snake venoms is the most dramatic method of injury, thereby challenging satellite cell function the most. Furthermore, the injection is minimally invasive, surgery time, in general, is less than five minutes and does not involve suturing, etc. thereby minimizing the risk of infections.

Muscle injury is mostly used to investigate the functional consequences of loss of gene functions, e.g., loss of Pax77,21. Especially if aged mice are the focus of the scientific question, the generation or use of transgenic mice is often not feasible. Injection of self-delivering siRNAs targeting a specific gene is a viable alternative in those cases and has been used successfully22. In brief, the tibialis anterior muscle of mice was injured by injection of cardiotoxin and self-delivering siRNAs directed against fibronectin (FN) were injected at day 3 after injury. Muscles were analyzed 10 days after injury and a significant decrease in satellite cell numbers was observed in siFN versus scrambled siRNA control conditions. The knockdown efficiency was determined in whole muscle lysates by quantitative Real Time PCR 2 days after siRNA injection, a reduction in expression levels of 58% was achieved suggesting that delivery and knockdown efficiency are sufficient for functional analyses22. Alternatives for testing the knockdown efficiency are either immunoblot or immunofluorescence analyses with antibodies directed against the target gene. The efficiency and specificity of the siRNA used for in vivo injections should be determined before injection into mice, e.g., by testing the efficiency in isolated satellite cells or primary myoblasts. The use of a smart pool consisting of 4 different siRNAs versus a single siRNA increases the efficiency of knockdown but also increases the risk of unspecific targeting. The specificity of all siRNA sequences used should be tested in cell culture to avoid off-target effects. As a control, a non-targeting scrambled siRNA should be used since the injection of a siRNA per se might influence the regeneration process due to the injection and, thereby, additional damage of the muscle. The time point of injecting the siRNA is depending on the scientific question and on the expression profile of the target gene. Generally, an injection of self-delivering siRNA at day 3 after cardiotoxin injury targets most genes important for satellite cell proliferation since satellite cell proliferation peaks around day 3 after injury. The time point for the first siRNA injection should not be less than 48 h after cardiotoxin injury since the injection volume of cardiotoxin is quite high and reabsorption of the liquid should have taken place before injecting additional solutions into the muscle. In general, multiple injections of siRNAs or a combination of different siRNAs is possible although one must consider that each injection into the regenerating muscle is causing additional damage.

We would like to thank Christina Picker and Christine Poser for excellent technical assistance and Saskia Steiner for help with the determination of siRNA transfection efficiency. We thank the core service histology for great technical support, especially Sabine Landmann and Linda Rothenburger. We also thank the animal facility mouse at the FLI for excellent support. This work was supported by grants from the Deutsche Forschungsgemeinschaft (MA-3975/2-1) and the Deutsche Krebshilfe (DKH-JvM-861005) to J.v.M.