Here, we present a modified screening method that can be extensively used to quickly screen RNA silencing suppressors in plant pathogens.

RNA silencing is an evolutionarily conserved, sequence-specific gene regulation mechanism in eukaryotes. Several plant pathogens have evolved proteins with the ability to inhibit the host plant RNA silencing pathway. Unlike virus effector proteins, only several secreted effector proteins have showed the ability to suppress RNA silencing in bacterial, oomycete, and fungal pathogens, and the molecular functions of most effectors remain largely unknown. Here, we describe in detail a slightly modified version of the co-infiltration assay that could serve as a general method for observing RNA silencing and for characterizing effector proteins secreted by plant pathogens. The key steps of the approach are choosing the healthy and fully developed leaves, adjusting the bacteria culture to the appropriate optical density (OD) at 600 nm, and observing green fluorescent protein (GFP) fluorescence at the optimum time on the infiltrated leaves in order to avoid omitting effectors with weak suppression activity. This improved protocol will contribute to rapid, accurate, and extensive screening of RNA silencing suppressors and serve as an excellent starting point for investigating the molecular functions of these proteins.

Over the past two decades, acceleration in genome sequencing of microorganisms that cause plant diseases has led to an ever increasing knowledge gap between sequence information and the biological functions of encoded proteins1. Among the molecules revealed by sequencing projects are effector molecules that suppress innate immunity and facilitate host colonization; these factors are secreted by destructive plant pathogens, including bacteria, nematodes, and filamentous microbes. To respond to these threats, host plants have evolved novel receptors that recognize these effectors, enabling restoration of the immune response. Hence, effectors are subject to various selective pressures, leading to diversification of effector repertoires among pathogen lineages2. In recent years, putative effectors from plant pathogens have been shown to disrupt plant innate immunity by impeding host cellular processes to benefit the microbes in a variety of ways, including dysregulation of signaling pathways, transcription, intracellular transport, cytoskeleton stability, vesicle trafficking, and RNA silencing3,4,5. However, the vast majority of pathogen effectors, particularly those from filamentous pathogens, have remained enigmatic.

RNA silencing is a homology-mediated gene inactivation machinery that is conserved among eukaryotes. The process is triggered by long double-stranded RNA (dsRNA) and targets the homologous single-stranded RNA (ssRNA) in a sequence-specific manner, and it manipulates a wide range of biological processes, including antiviral defense6. To surmount innate immune responses of the host, some viruses have evolved to offset RNA silencing, including the ability to replicate inside intracellular compartments or escape from the silencing reorganized signal. Nevertheless, the most general strategy by which viruses protect their genomes against RNA silencing-dependent loss of gene function is to encode specific proteins that suppress RNA silencing7,8. Several mechanistically different approaches have been established to screen and characterize viral suppressors of RNA silencing (VSRs), including the co-infiltration of Agrobacterium tumefaciens cultures, transgenic plants expressing putative suppressors, grafting and cell culture9,10,11,12,13.

Each of these assays has advantages and disadvantages, and identifies VSRs in its own distinct manner. One of the most common approaches is based on the co-infiltration of individual A. tmuefaciens cultures harboring the potential viral protein and a reporter gene (typically green fluorescent protein [GFP]) on the Nicotiana benthamiana 16c plants constitutively expressing GFP under the control of the cauliflower mosaic virus 35S promoter. In the absence of an active viral silencing suppressor, GFP is identified as exogenous by the host cells and is silenced within 3 days post-infiltration (dpi). By contrast, if the viral protein possesses suppression activity, the expression level of GFP remains steady beyond 3−9 dpi9. This co-infiltration assay is simple and fast; however, it is neither highly stable nor sensitive. Nonetheless, the assay has identified numerous VSRs with diverse protein sequences and structures in many RNA viruses7,8.

Recently, several effector proteins that can inhibit the cellular RNA silencing activity have been characterized from bacterial, oomycete, and fungal plant pathogens14,15,16. These findings imply that RNA silencing suppression is a common strategy for facilitating infection that is used by pathogens in most kingdoms. In theory, many, if not all, of the effectors might encode RNA silencing suppressors (RSSs); to date, however, only a few have been identified, mainly due to the shortage of the reliable and general screening strategy. Moreover, suppressors of RNA silencing have not been investigated in the vast majority of plant pathogens17.

In this report, we present an optimized and general protocol for identifying plant pathogen effectors that can suppress local and systemic RNA silencing using the agro-infiltration assay. The foremost objective of this study was to emphasize the key aspects of the protocol and describe the steps in detail, thereby providing a screening assay that is suitable for almost all effectors of plant pathogens.

NOTE: All steps of the procedure should be conducted at room temperature (RT).

CAUTION: Deposit all media containing pathogenic microbes, as well as the plants and plant tissue used in the assay, into the appropriate waste containers and autoclave before discarding.

3. Preparation of Agrobacterium culture for infiltration

Above, we describe the step-by-step procedure for an improved screening assay for assessing the RSS activity of P. sojae RxLR effectors. Altogether, the experiment takes 5−6 weeks. Subsequently, the RSSs identified by the assay can be further characterized in terms of function and molecular mechanism. As an example of our approach, we used the P. sojae RxLR effecto Phytophthora suppressor of RNA silencing 1 (PSR1), which is secreted and delivered into host cells through haustoria during infection.

We also used the agro-infiltration assay to evaluate the spread of the silencing signal in the leaves of 2-week-old N. benthamiana 16c seedlings. For this purpose, we usually selected 3−4 larger leaves for whole leaves injection. At 14 dpi, more than 98% of the EV exhibited obvious no GFP signaling in systemic leaves, whereas both PSR1 and CMV2b efficiently inhibited the systemic spread of the silencing signal by observing GFP fluorescence in about 80% of co-infiltrated plants, and in the remaining 20% of infiltrated plants with only a few red veins appeared in newly emerged leaves (Figure 3). 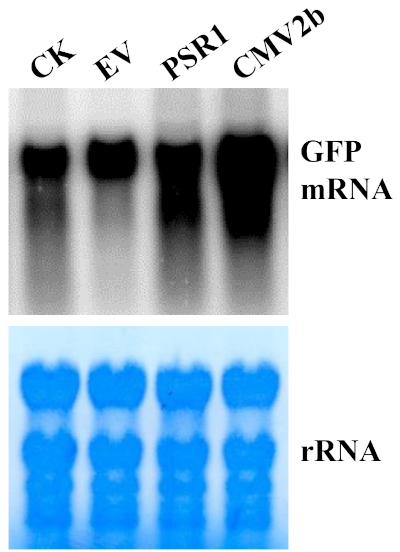 RNA silencing is a key defense mechanism employed by plants to combat viral, bacterial, oomycete, and fungal pathogens. In turn, these microbes have evolved silencing suppressor proteins to counteract antiviral silencing, and these RSSs interfere with different steps of the RNA silencing pathway22,23. Several screening assays have been developed to identify RSSs10.

Here, we describe an improved protocol for screening effector proteins secreted by P. sojae into the host cell upon infection for their ability to suppress RNA silencing in host. This modified assay is based on a viral co-infiltration assay but differs in several important ways. First, both bacteria and N.benthamiana 16c plants should be vigorous and healthy; this is very important for stable expression of effectors from the bacteria and the use of fully developed N.benthamiana 16c ensures experimental reproducibility and reliability. We often use only two or three fully developed leaves per plant at the vegetative growth stage, the old and newly emerged leaves are unsuitable. Secondly, OD600 of the bacterial culture must be adjusted to an optimal value, usually 0.75−1.0 for Agrobacterium. A lower OD600 (even as low as 0.2) can be used to screen VSRs but not PSRs24. Third, the ideal time point for investigating green fluorescence must be optimized for each effector. In virus, leaves co-injected with cultures containing GFP plus putative VSRs exhibit a marked increase in green fluorescence in the infiltrated area at 3 dpi, and the signal remains high until 9 dpi22, but it was only exhibited at 4 or 5 dpi for PSRs in our present study. Therefore, it is also important to further confirm the RNA silencing activity by quantify the accumulation of GFP mRNA. Finally, it is essential to use the appropriate control. VSRs are not always the ideal positive controls for identifying effector proteins because these proteins have much stronger suppressive activity than PSRs. This could result in failure to detect weak suppressors of RNA silencing.

In this report, we demonstrate the use of our modified assay to screen for suppressors of RNA silencing in Phytophthora and Puccinia graminis pathogens. Thus, our method represents a useful tool for characterizing potential effectors that encode RSSs, which promote disease susceptibility by inhibiting small RNA accumulation15,16,17. Therefore, we believe that our protocol could be used broadly to screen effectors secreted by plant pathogens. Future work will focus on identifying more RSSs in other pathogens, and on elucidating the role of RNA silencing in plant defense against invading microbes.

This work was supported by grants from the "Shuguang Program" of Shanghai Education Development Foundation and Shanghai Municipal Education Commission, the National Key Research and Development Program of China National Key R&D Program of China (2018YFD0201500), the National Natural Science Foundation of China (no. 31571696 and 31660510), the Thousand Talents Program for Young Professionals of China, and the Science and Technology Commission of Shanghai Municipality (18DZ2260500).