Environmental bacterioplankton are incubated with a model dissolved organic carbon (DOC) compound and a DNA labeling reagent, bromodeoxyuridine (BrdU). Afterward, DOC-degrading cells are separated from the bulk community based on their elevated BrdU incorporation using fluorescence activated cell sorting (FACS). These cells are then identified by subsequent molecular analyses.

Here we describe an approach that couples bromodeoxyuridine (BrdU) incorporation, fluorescence activated cell sorting (FACS), and 16S rRNA gene-based molecular analysis that allows culture-independent identification of bacterioplankton capable of degrading a specific DOC compound in aquatic environments. Triplicate bacterioplankton microcosms are set up to receive both BrdU and a model DOC compound (DOC amendments), or only BrdU (no-addition control). BrdU substitutes the positions of thymidine in newly synthesized bacterial DNA and BrdU-labeled DNA can be readily immunodetected 1,2. Through a 24-hr incubation, bacterioplankton that are able to use the added DOC compound are expected to be selectively activated, and therefore have higher levels of BrdU incorporation (HI cells) than non-responsive cells in the DOC amendments and cells in no-addition controls (low BrdU incorporation cells, LI cells). After fluorescence immunodetection, HI cells are distinguished and physically separated from the LI cells by fluorescence activated cell sorting (FACS) 3. Sorted DOC-responsive cells (HI cells) are extracted for DNA and taxonomically identified through subsequent 16S rRNA gene-based analyses including PCR, clone library construction and sequencing.

3. In situ immunodetection for BrdU Incorporation

Steps 3.8-3.20 use the reagents from the ROCHE In Situ Cell Proliferation Kit, FLUOS following procedures modified from the manufacturer's instructions. Except for PBS, all reagents are provided within the kit.

A procedure for a BD FACSAria flow cytometer and corresponding software is described here.

Representative results are described using a study of putrescine-degrading bacteria as an example. Water samples were collected from a coastal site of Georgia and processed following the procedures described above. FACS analysis revealed that putrescine addition induced development of a group of bacteria with high FITC fluorescence intensity, indicating high BrdU incorporation rate (Figure 1). These cells were designated as high-BrdU-incorporation cells (HIs) and were expected to contain mostly putrescine-degrading bacteria. HIs were missing in the no-addition controls, which only contained cells with lower levels of BrdU incorporation (LIs). LIs were expected to mainly contain bacterioplankton that were unable to use added putrescine. HIs were sorted into separated tubes and then collected onto membrane filters. 16S rRNA gene amplicons were obtained for high HI cells using filter PCR. 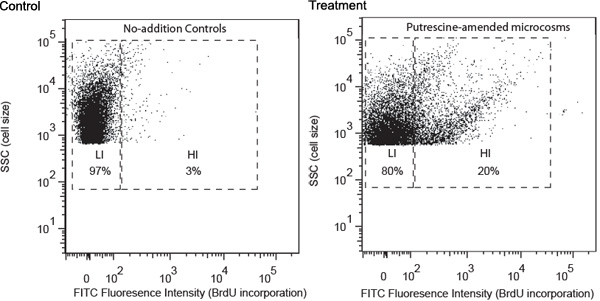 Figure 1. Flow cytometric analysis of no-addition control and model-compound-amended (putrescine as an example here) samples collected after 24 h of incubation. Cell distribution analysis was based on (1) fluorescence intensity of FITC labeling (x-axis), which is positively related to level of BrdU incorporation, and (2) side scatter (SSC, y-axis), which is positively related to cell size. Gate notation is based on level of BrdU incorporation, (HI, high-BrdU-incorporation; LI, low-BrdU-incorporation). The relative percentage of HI and LI cells are shown in corresponding gates.

Our approach couples BrdU incorporation, FACS and 16S rDNA analysis to allow species-level identification of bacterioplankton that metabolize individual DOC components in aquatic environments. The BrdU incorporation assay labels bacterial cells based on metabolic activities, which allows analysis only on active bacteria and thus does not include dormant cells. In our approach, BrdU incorporation is in situ immunodetected and bacteria that have different levels of BrdU incorporation are subsequently visualized, grouped and sorted using FACS. Analysis of BrdU incorporated cells has also been reported using magnetic bead immunocapture of BrdU-labeled DNA followed by molecular analyses 2,8,9. One limitation of the latter methodology is its inability to distinguish cells of different activity levels. In that case, the analysis will include cells that remain only slightly active by using indigenous DOC in the water samples (Figure 1, LIs).

The coupled approach has been used to identify the taxonomic structures of bacteria that are able to degrade DOC compounds such as dimethylsulfoniopropionate (DMSP), vanillate, glycine betaine in coastal seawater 3. Its application can be broadly extrapolated to study taxonomy of bacteria that use other single or mixed dissolved substrates in aquatic environments. In addition to 16S rRNA genes, functional gene markers can also be similarly analyzed. Molecular analysis on sorted cells is challenging due to the small abundance of sorted cells, which is typically less than 1 million cells. Therefore, DNA template amplification is typically required for further molecular analysis. Although limited in cell quantity, sufficient resolution of community structure is usually obtained. Studies have demonstrated that community finger prints generated by terminal restriction fragment length polymorphism (T-RFLP) from as low as 2,000 cells (˜ 1 μl seawater) largely resemble those generated from 2x109 cells (˜1 L seawater) in coastal seawater10. In addition to the single gene amplification using PCR, metagenomic analysis of sorted cells is possible through a non-PCR based genomic amplification technique, namely multiple displacement amplification, MDA 11.

To maintain conditions close to nature, addition of excessive amounts of external DOC compounds to microcosms and prolonged incubation should be avoided. Preliminary experiments are highly recommended to determine the lowest amounts of model DOC compounds that are required to induce development of HI cells in a relatively short time (< 72 hours). Longer incubation times may raise the concern of development of bottle-effect in microcosms. Pre-incubation with inorganic N and P is optional, but may help shorten the length of incubation time that is required for the development of HI cells in DOC amended microcosms.

Conditions for cell fixation before BrdU fluorescence immunodetection are critically important. Insufficient fixation will cause loss of cells during cell wall permeabilization steps (lysozyme and proteinase K treatments). On the other hand, over-preserved cells tend to be too rigid to lyse and release DNA template for the filter-PCR amplification. Selection of preservative, preservative concentration and preservation time length should be optimized for studied bacterial community. Preservation procedures listed in this protocol have been optimized for a coastal marine bacterioplankton community that is largely dominated by Proteobacteria in the alpha- and gamma- subdivisions 10.

Multiple steps of BrdU immunodetection are performed on membrane filters. Caution should be taken to avoid over drying the filters. Dehydrated cells on over-dried filters may strongly attach to the filter membranes and will then be difficult to resuspend for later FACS analysis. Cell counts of bacteria before and after BrdU immunodetection should be always measured to determine the recovery rate of bacterial cells.

When performing filter-PCR 6, the volume of PCR reagents should be enough to submerge the filter piece entirely. An optimized hot-start and touch-down PCR program in general will help to produce good gene amplification. Further PCR optimization can be performed by using a PCR optimization kit (such as the EPICENTRE FailSafe PCR System) or manipulating the concentrations of Mg2+, BSA and other ingredients.

This coupled approach allows collection of bacteria that can potentially degrade a specific substrate and can culture-independently identify these functional cells to detailed taxonomic levels. However, several considerations should be taken into account when interpreting results. The approach initiates by incubation of natural bacterioplankton with specific compounds, typically at non-tracer levels in glass bottles. Cells identified as functional assemblages may differ from those that process the given compound(s) under in situ conditions. BrdU incorporation has been found to be undetectable for some bacteria 1,2. These bacteria, therefore, are inaccessible using this method. Bacteria that are not directly involved in compound degradation but take up degradation products of added compound(s) may give false-positive signals that are indistinguishable from the true degraders. 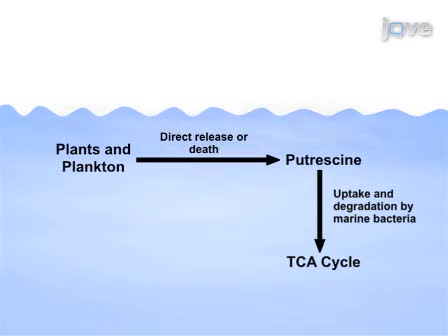