Modulation of hippocampally-dependent spatial working memory by direct intrahippocampal microinjection, accompanied and followed by in vivo microdialysis for metabolites in conscious, behaving animals.

Glucose metabolism is a useful marker for local neural activity, forming the basis of methods such as 2-deoxyglucose and functional magnetic resonance imaging. However, use of such methods in animal models requires anesthesia and hence both alters the brain state and prevents behavioral measures. An alternative method is the use of in vivo microdialysis to take continuous measurement of brain extracellular fluid concentrations of glucose, lactate, and related metabolites in awake, unrestrained animals. This technique is especially useful when combined with tasks designed to rely on specific brain regions and/or acute pharmacological manipulation; for example, hippocampal measurements during a spatial working memory task (spontaneous alternation) show a dip in extracellular glucose and rise in lactate that are suggestive of enhanced glycolysis1-3,4-5, and intrahippocampal insulin administration both improves memory and increases hippocampal glycolysis6. Substances such as insulin can be delivered to the hippocampus via the same microdialysis probe used to measure metabolites. The use of spontaneous alternation as a measure of hippocampal function is designed to avoid any confound from stressful motivators (e.g. footshock), restraint, or rewards (e.g. food), all of which can alter both task performance and metabolism; this task also provides a measure of motor activity that permits control for nonspecific effects of treatment. Combined, these methods permit direct measurement of the neurochemical and metabolic variables regulating behavior.

Rats should recover rapidly from surgery and be alert, motile and active within 30 min following cessation of anesthesia. The impact of the cannula cap should be minimal if the surgery is performed cleanly and minimal dental cement is used. If any sign of infection is noticed during the post-operative monitoring, or the rat is in any way showing signs of distress or discomfort, immediately terminate the experiment; this should be extremely rare. During the handling prior to testing, animals should be alert, freely motile, friendly and inquisitive. Well-handled animals should have essentially no observable stress remaining from surgery, post-surgical recovery, or the presence of the experimenter; this can be confirmed if desired by measurement of plasma stress hormones (epinephrine, glucocorticoids) and/or glucose4-5,7,8.

Brain ECF glucose is typically in the range 0.5 - 1.5 mM, varying by brain region, although higher values may be seen in diabetic animals; in the hippocampus, baseline glucose concentrations are on the close order of 1.25 mM9,16. In the absence of any exogenous treatment, a dip in ECF glucose (and, commonly, a rise in ECF lactate) should be seen, during task performance, in brain regions involved in mediating that task (see Figure 1 for example): this reflects the increased metabolic activity induced by the cognitive load13,19,21. Similar changes may be taken as evidence that a particular treatment increases local metabolism, as seen for instance after acute administration of insulin via addition to the perfusate10 (Figure 2).

In general, a well-handled animal should perform behavioral testing with no sign of distress and without any sign of awareness of the microdialysis tubing: signs of excessive grooming, immobility, any indication of pain or attempts by the animal to remove the probe indicate likely insufficient handling and/or infection around the probe site, and should be taken as an indication to terminate that experiment.

Animals receiving insulin administration should, in addition to elevated hippocampal metabolism, show markedly enhanced spatial memory10. Control, untreated animals should have mean alternation performance on the 4-arm maze of between 65 and 75%10,13,19. 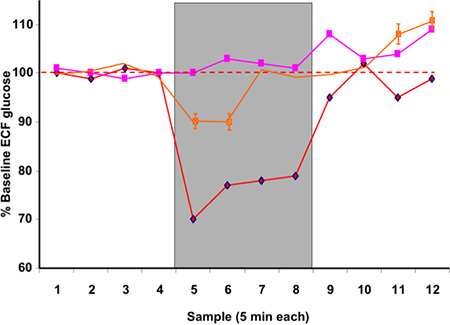 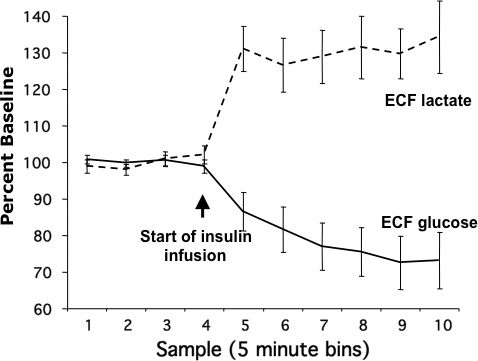 Figure 2. Alterations in hippocampal glucose and lactate after administration of insulin via inclusion in the perfusate (adapted from10). Insulin reaches the hippocampus at the point indicated by arrow and is administered continuously thereafter. Animals were tested in their home cages, with no behavioral manipulation.

All solutions used in microdialysis should be filtered immediately prior to use, using a .2 μm filter. After insertion of the probe into the guide cannula, observe to confirm that flow is unimpeded and sample collection is occurring. If flow stops after insertion, the most likely cause is damage to the probe membrane caused by insufficient care on insertion, and a fresh probe must be substituted.

As noted above, a key advantage to these methods is the lack of confound, permitting both behavioral and neurochemical measures in awake, freely moving animals: to take advantage of this, extensive handling prior to testing is essential in order that the animal be unstressed during measurements. The equilibration period is generally sufficient to provide a stable metabolic baseline, but food may be removed for 1-2 hr prior to testing if desired in order to ensure uniform blood glucose levels across animals.

The two most significant limitations of mD as a sampling technique are (i) restricted size of analyte and (ii) potential for loss of analyte due to adhesion in the tubing. The former can be alleviated to some extent by the use of mD probes with a larger molecular weight cutoff. Typical commercial probes permit cutoffs of up to 100 kD, so that molecules of up to perhaps 50 kD will pass through relatively unimpeded; however, use of lower cutoff membranes is recommended where possible to minimize any sample loss via ultrafiltration at the probe tip. Adhesion of target molecules to the tubing is an issue primarily in the cases of peptide measurements, many of which will tend to adhere to FEP tubing and hence reduce both analyte recovery and measurement accuracy. This problem can be minimized by (i) pre-treating the interior of the tubing using a perfusate to which 2% bovine serum albumin has been added, acting as a blocking agent, and (ii) by minimizing the length of the return tubing: if needed, a lightweight collection vial can be attached close to the outflow of the probe, although this poses additional challenges in switching collection tubes without disturbing the animal, especially during behavioral testing. One advantage of the technique is that samples are obtained in a form free of cellular debris or large molecules such as enzymes, and are generally suitable for direct analysis via injection into HPLC, MS or other analytical machinery as-is without the need for further purification; this also permits in many cases the analysis of multiple analytes in each sample (such as the glucose and lactate measurements shown in Figure 2).

A variation on the use of reverse microdialysis to deliver pharmacological treatments is to use dual microinjection-microdialysis probes, available from several sources. However, the bore of the injection port is generally very narrow and prone to blockage, and it can be difficult to accurately control the timing and/or volume of treatment delivery. This alternative is hence only recommended for treatments that are not amenable to delivery via inclusion in the perfusate.