Ectopic expression is one technique to elucidate the microRNAs role in brain development. However, targeting specific areas using in ovo electroporation is challenging. Here, we show an efficient way to selectively electroporate ventral and dorsal midbrain regions.

Non-coding RNAs are additional players in regulating gene expression. Targeted in ovo electroporation of specific areas provides a unique tool for spatial and temporal control of ectopic microRNA expression. However, ventral brain structures like ventral midbrain are rather difficult to reach for any manipulations. Here, we demonstrate an efficient way to electroporate miRNA into ventral midbrain using thin platinum electrodes. This method offers a reliable way to transfect specific areas of the midbrain and a useful tool for in vivo studies.

This video demonstrates the different steps of performing ectopic expression of miRs in specific areas of the chick midbrain using in ovo electroporation6-10. To ensure a long lasting effect of these small non-coding RNAs in cells, the DNA sequence of miRs were cloned into mono- or bi-cistronic vectors. For in ovo electroporation, miR containing vector is injected into the midbrain neural tube by exposing the embryo after making a small window in the egg shell. To transfect specific areas of the midbrain small plus (anode) and minus (cathode) platinum electrodes are placed at specific positions. For ventral midbrain transfection, the anode is placed underneath the left ventral midbrain and the cathode above the right half of the midbrain before applying a current. The opening in the eggshell is closed with tape and embryos are incubated for as long as required for any analysis. This method was originally described by Muramatsu et al.6 and improved by Momose et al.8 for specific area transfection. 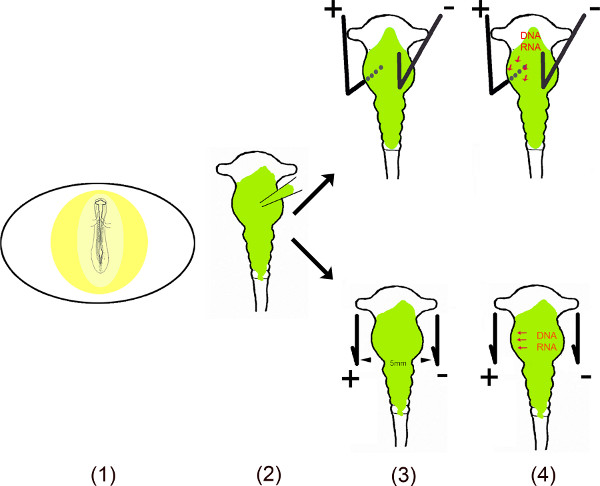 1. Requirements for In ovo Electroporation 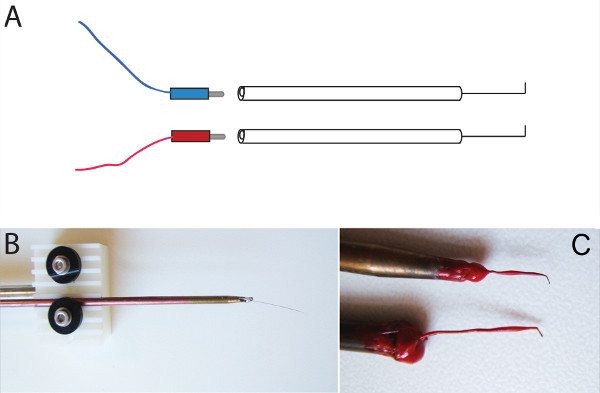 Figure 1. Schematic diagram of electrodes and electrode holder. (A, B, C) Platinum wire was soldered to one side of a stainless steel tubular shaft. A hole was drilled into the other side of the tubular shaft thus that pin plugs can fit in. (A) Red and blue colored wires were connected to the pin plugs. At the opposite end the wire was fitted to banana connectors that work with the electrical sockets of the electroporator. (A, C) The platinum wire was bent in an angel of 90°. A layer of nail varnish isolated the shaft above the bend.

2. Preparations Directly Before In ovo Electroporation

Table 2. Settings for the Pulse Stimulator

The extent of the midbrain area transfected with miR is visible through the expression of GFP from a reporter vector injected along with the miR expressing vector (Figure 2). Using platinum electrodes with a diameter of 0.5 mm and placed parallel to the AP axis of midbrain leads normally to the transfection of a broad area along the DV- and AP- axis, including hindbrain, midbrain and sometimes diencephalon (Figures 2A and B). The size of the electrodes results in a wide electric field applied to the brain region and thus a wide transfected area.

It is difficult to accurately target an area like for example the ventral midbrain. Reducing the distance between the 0.5 mm electrodes to achieve a smaller electric field is often toxic for the embryo and leads to artifacts. We used electrodes with smaller diameters (0.2 mm, 0.25 mm platinum or 0.1 mm sharpened tungsten wire), which offer more localized transfection like that of the ventral brain, which is difficult to reach (Figures 2C-I). Smaller electrodes reduce the electric field applied and enable to insert the electrodes much closer to the tissue. Figure 2F shows an example, where the entire ventral midbrain had been transfected. In Figures 2G and 2H the transfected ventral areas are smaller, but part of the hindbrain (2F) or diencephalon (2H) are also transfected. In Figure 2G, the anode was placed under the mid- and hindbrain to transfect both ventral areas. Figure 2H shows an example of an anode not well isolated with nail varnish along the shaft. Thus, not only the ventral area around the MHB expresses miR/GFP but also the dorsal anterior mes- and di-encephalon, where the shaft of the anode had been placed. The specific ventral miR/GFP distribution in Figures 2C-I is a result from the local electric field we apply with the smaller electrodes. Taken together, with smaller electrodes and electric fields we can express DNA/RNA in more restricted areas like ventral midbrain.

Since our microRNA expression vector contains no reporter gene, we mix in a GFP expressing vector in a ratio of 1 μg/μl to 0.9 μg/μl, respectively. The almost equal ratio ensures that the microRNA and GFP transfected area almost completely overlap (see Momose et al.8 and own experience). To be able to judge the extent of the transfected area becomes important when only a small area containing specific cell types is transfected or the transfected cells are used for qRT-PCR. A much less concentration of the reporter gene might lead to cells expressing GFP under the detection level. The strength of expression of any transfected vector depends not only on the concentration of the used vector but also on the promoter. Our vectors are U6-promoter driven (expressing miRNA) and ß-actin promoter driven (expressing fluorescent proteins) and are both ubiquitously and constitutively active in the chick embryo.

Most of our embryos are electroporated at the left side except for Figure 2C (mirror image). For time-lapse experiments, electroporation of the right side of the embryo is recommended since most embryos turn their head towards the right and lie on their left side.

This video demonstrates an effective method to transfect plasmid into the neuroepithelial cells of specific areas of the chick midbrain. Rectangular electric pulses of low voltage can introduce DNA into cells of the chick neural tube in ovo6,16. However, the accuracy of DNA targeting is often hindered by the wide electric field, which rises through the relatively large electrodes (Φ = 0.5 mm). We tried to tackle that problem by using electrodes smaller in diameter following the guidelines of Momose et al.8. For ventral midbrain transfection, we place the cathode under the membrane of the area pellucida or if the age of the embryo allows it directly below the ventral midbrain. The last scenario needs a bit of practice since midbrain/neural tube tissue should not be touched and damaged by the anode. Adding Ringer can often help to lift the head of the embryo slightly off the membrane covering the area pellucida.

We hold both electrodes with our hands. However, that requires calm and steady hands and a bit of practice. Since the position of the cathode is above the embryo, this electrode can be fixed to a micromanipulator. That leaves only one electrode to be put into position manually. Electrodes too close to the embryo/neural tube will literally scorch the embryo and lead to unwelcome anatomical malformation. Hence, the strength of the voltage should be carefully adjusted to each series of experiments and care should be taken when placing the electrodes. These precautions will prevent any morphological, cellular or molecular malformation caused by the procedure itself.

Although to consider are gene concentrations in the cell. Different gene doses might have different effects on cells and tissue. There could be a threshold effect involved (see Agoston et al.17, for example) or different, graded effects. We normally test different concentrations of the miR expressing (0.5-2 μg/μl) vector and analyse changes in morphology or protein/gene-expression. Effects can be tested in vivo using immunohistochemistry, sensor vectors18 or RNA in situ hybridization.

This technique also offers to test strength and location of any activity of a specific miR in vivo using for example a dual fluorescence reporter/sensor vector as described in De Pietri Tonelli et al.18. They use a vector that contains a GFP-reporter and a RFP miR sensor. The RFP is followed by a complimentary miR sequence. While GFP expression identifies the successfully transfected cells, red fluorescence (RFP) indicates the absence of the investigated miR, and disappearance of red fluorescence betrays the presence of the miR. This technique can also be used to test the specificity of miR target in vivo, by using 3'UTR of the target sequence in the downstream of RFP. Taken together this technique is highly appropriate for developmental studies on gene expression and function in different tissues. 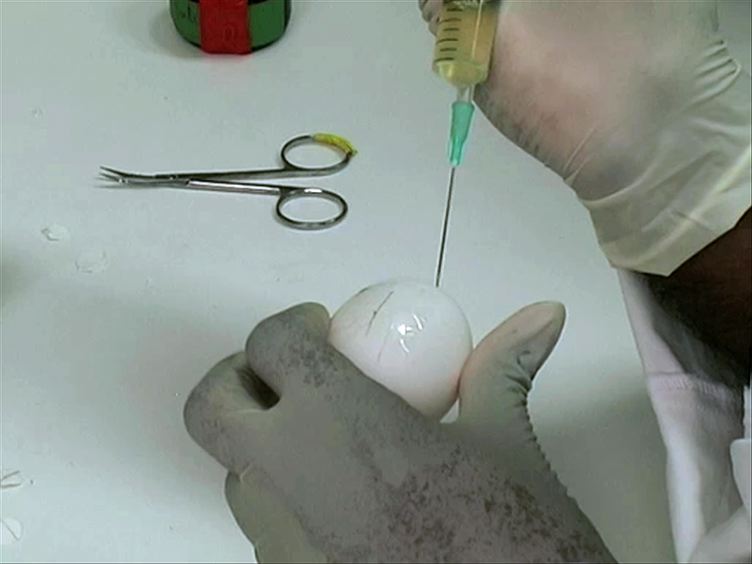