A simple method to record extracellular field potentials in the larval zebrafish forebrain is described. The method provides a robust in vivo read-out of seizure-like activity. This technique can be used with genetically modified zebrafish larvae carrying epilepsy-related genes or seizures evoked by administration of convulsant drugs.

Epilepsy affects nearly 3 million people in the United States and up to 50 million people worldwide. Defined as the occurrence of spontaneous unprovoked seizures, epilepsy can be acquired as a result of an insult to the brain or a genetic mutation. Efforts to model seizures in animals have primarily utilized acquired insults (convulsant drugs, stimulation or brain injury) and genetic manipulations (antisense knockdown, homologous recombination or transgenesis) in rodents. Zebrafish are a vertebrate model system1-3 that could provide a valuable alternative to rodent-based epilepsy research. Zebrafish are used extensively in the study of vertebrate genetics or development, exhibit a high degree of genetic similarity to mammals and express homologs for ~85% of known human single-gene epilepsy mutations. Because of their small size (4-6 mm in length), zebrafish larvae can be maintained in fluid volumes as low as 100 μl during early development and arrayed in multi-well plates. Reagents can be added directly to the solution in which embryos develop, simplifying drug administration and enabling rapid in vivo screening of test compounds4. Synthetic oligonucleotides (morpholinos), mutagenesis, zinc finger nuclease and transgenic approaches can be used to rapidly generate gene knockdown or mutation in zebrafish5-7. These properties afford zebrafish studies an unprecedented statistical power analysis advantage over rodents in the study of neurological disorders such as epilepsy. Because the "gold standard" for epilepsy research is to monitor and analyze the abnormal electrical discharges that originate in a central brain structure (i.e., seizures), a method to efficiently record brain activity in larval zebrafish is described here. This method is an adaptation of conventional extracellular recording techniques and allows for stable long-term monitoring of brain activity in intact zebrafish larvae. Sample recordings are shown for acute seizures induced by bath application of convulsant drugs and spontaneous seizures recorded in a genetically modified fish.

Examples of electrographic seizure-like discharge recorded in the forebrain of an agar-embedded zebrafish larvae are shown in Figure 1. Large-amplitude multi-spike burst discharge in these samples was evoked by bath application of a convulsant drug, 40 mM pilocarpine (in A; 6 dpf) or 1 mM picrotoxin (in B; 8 dpf). In these recordings, immobilized and agar-embedded zebrafish are continuously monitored for up to 90 min. Fish remain viable under these recording conditions for up to 24 hr. Drugs are added to the bathing medium and normally diffuse into the agar to elicit activity in the larval zebrafish forebrain within 30 to 45 min. This method can be used with relatively small volumes of drug solution (2-5 ml) as larvae do not require continuous perfusion and can be recorded in a static bath configuration if necessary. In panel C, a spontaneous burst discharge is shown for a genetically modified zebrafish at 3 dpf; recording was made in zebrafish recording media. Morpholino oligonucleotide injection at the 1-2 cell stage was used to knockdown expression of a gene for Tuberous Sclerosis Complex (tsc1a), a pediatric form of epilepsy associated with seizures and autism. Extracellular recordings can also be obtained from the optic tectum. For examples, see Baraban et al. (2005)9 or Baraban et al. (2007)10. As shown here, the electrical events can vary in waveform and duration depending on the mechanism of action used to elicit seizure activity. 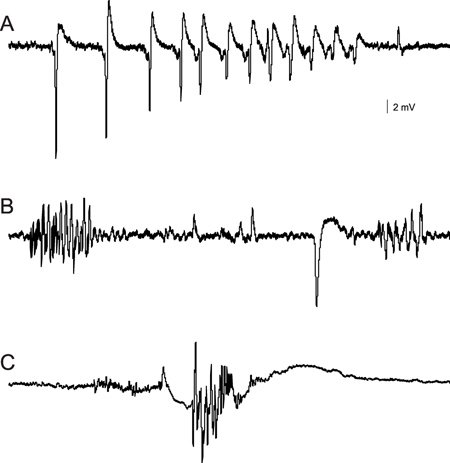 Figure 1. Extracellular field recordings of abnormal burst discharge activity recorded in the forebrain of immobilized and agar-embedded zebrafish larvae. Recording electrodes are positioned under visual observation on an Olympus BX50 upright microscope. Recordings in (A) and (B) were initiated approximately 40 to 45 min after drug application. (A) Multi-spike discharge recorded in pilocarpine, a muscarinic acetylcholine receptor antagonist. (B) Burst discharges recorded in picrotoxin, a GABA-A receptor antagonist. (C) A single multi-spike burst discharge recorded from a 3 dpf zebrafish larvae injected with a morpholino against tsc1a.

The extracellular recording method presented here enables a very sensitive and rapid analysis of brain activity. These recordings are analogous to electroencephalographic (EEG) monitoring commonly used to evaluate the presence of abnormal electrical discharge (i.e., seizure) in rodent models of epilepsy11 and patients12. Extracellular recordings can be combined with pharmacological manipulations, as shown here. These types of recordings can also be used to evaluate potential epileptic phenotypes in genetically modified zebrafish. Mutant zebrafish are commonly available for many gene mutations identified in ENU mutagenesis screens (see Zebrafish International Resource Center, http://zebrafish.org/zirc/home/guide.php) or through emerging Tol2 transgenic7 and zinc finger nucleotide13 techniques. As demonstrated here, rapid gene knockdown using morpholino oligonucleotides followed by electrophysiological monitoring as early as 3 dpf provides an additional method to assess seizure-inducing gene defects. The recording electrode can easily be placed in any zebrafish structure including the optic tectum or cerebellum, and multiple recording electrodes can be used if needed. A limitation of these recordings is that it is difficult to assess the precise location of the recording electrode tip relative to specific brain nuclei. The availability of zebrafish carrying fluorescent reporters in specific nuclei or cell types will mitigate this limitation.

The author would like to thank Peter Castro and Matthew Dinday for their early efforts to establish zebrafish in the laboratory. This work was funded by the National Institutes of Health EUREKA grant (#R01NS079214-01). 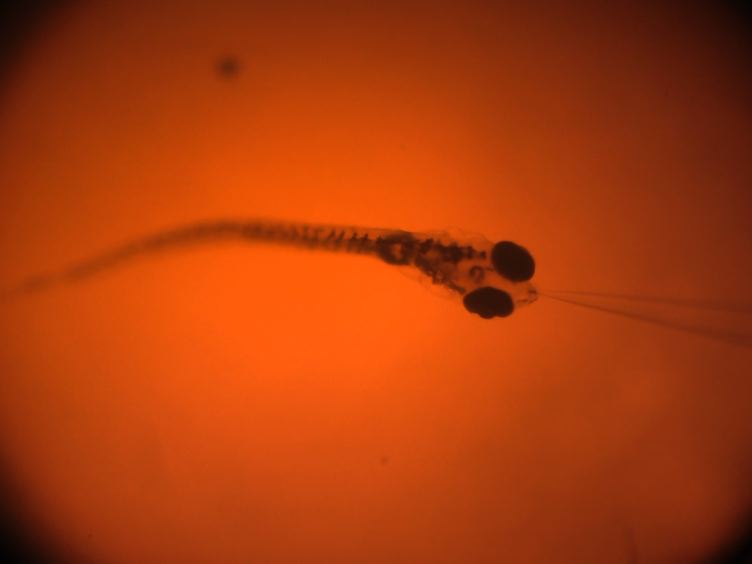