Infection of the prostate may be a contributing factor in mediating pelvic pain in chronic prostatitis. We describe the procedure for preparation of standardized bacterial inoculum, instillation of bacteria into the urethra of male mice and methodology for measuring tactile allodynia in mice over time.

Uropathogenic Escherichia coli (UPEC) are pathogens that play an important role in urinary tract infections and bacterial prostatitis1. We have recently shown that UPEC have an important role in the initiation of chronic pelvic pain2, a feature of Chronic prostatitis/Chronic pelvic pain syndrome (CP/CPPS)3,4. Infection of the prostate by clinically relevant UPEC can initiate and establish chronic pain through mechanisms that may involve tissue damage and the initiation of mechanisms of autoimmunity5.

A challenge to understanding the pathogenesis of UPEC in the prostate is the relative inaccessibility of the prostate gland to manipulation. We utilized a previously described intraurethral infection method6 to deliver a clinical strain of UPEC into male mice thereby establishing an ascending infection of the prostate. Here, we describe our protocols for standardizing the bacterial inoculum7 as well as the procedure for catheterizing anesthetized male mice for instillation of bacteria.

CP/CPPS is primarily characterized by the presence of tactile allodynia4. Behavior testing was based on the concept of cutaneous hyperalgesia resulting from referred visceral pain8-10. An irritable focus in visceral tissues reduces cutaneous pain thresholds allowing for an exaggerated response to normally non-painful stimuli (allodynia). Application of normal force to the skin result in abnormal responses that tend to increase with the intensity of the underlying visceral pain. We describe methodology in NOD/ShiLtJ mice that utilize von Frey fibers to quantify tactile allodynia over time in response to a single infection with UPEC bacteria.

The following must be done under aseptic conditions.

Mice (5 to 7 weeks old, ten per group) were purchased from Jackson Laboratory (Bar Harbor, ME).

Mice were tested prior to infection (baseline) and on days 3, 7, 14, 21 and 28 after infection. Referred hyperalgesia and tactile allodynia was tested using von Frey filaments applied to the abdomen11,12 and the plantar region of the hind paw13. Testing was perfomed at a fixed time-of-day, standard methodology and single experimenter testing of all animals were employed. Blinded testing of groups was utilized to combat the limitations of behavior-based pain testing in animal models. Five individual von Frey filaments with forces of 0.04, 0.16, 0.4, 1.0 and 4.0 g (Stoelting, USA) were applied to the abdomen and frequency of withdrawal responses was calculated.

We examined NOD/ShiLtj and C57BL/6J male mice for the presence of chronic pain upon bacterial infection. Male mice (5 to 7 weeks old) were instilled with saline or bacteria into the urethra (Figure 1). Mechanical stimulation of the pelvic area with von Frey filaments of saline-instilled C57BL/6J mice and UPEC-infected C57BL/6J mice resulted in a response frequency that did not change during the 28-day course of the experiment (Figure 1). In contrast, UPEC-infected NOD mice exhibited responses to pelvic stimulation that were significantly greater and remained significantly elevated until day 28 (P < 0.05; Figure 3). Bacterial infection resulted in no changes in tactile sensitivity of the plantar region of the hind paw (data not shown). 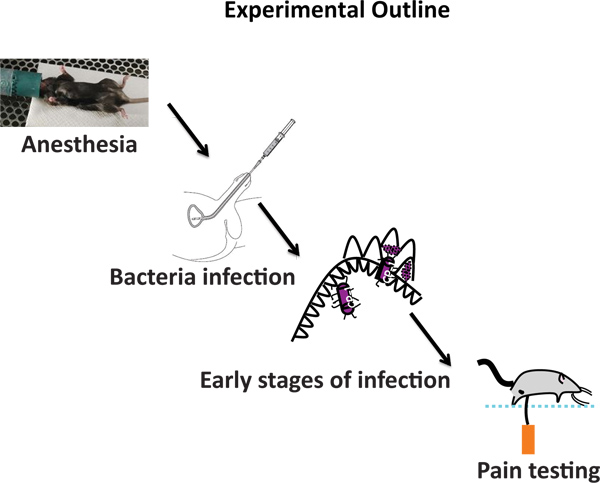 Figure 1. Experimental flow chart. 1 x 108 bacteria prepared by a three-day culture was suspended in PBS and instilled into the urethra of anesthetized mice by catheterization. Resulting tactile allodynia was quantified using von Frey filaments with forces of .04, .16, .4, 1, and 4 g. 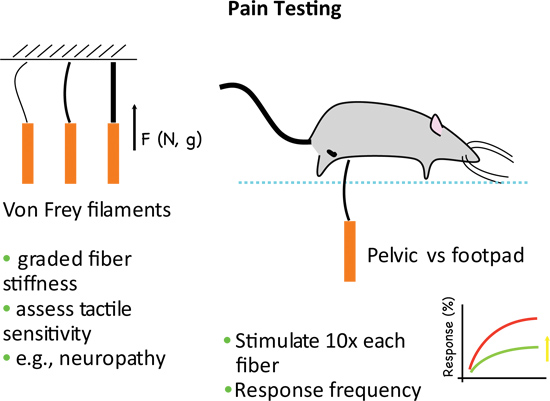 Figure 2. Methodology for testing tactile allodynia using von Frey fibers. Mice were tested before bacterial infection and at post-infection days (PIDs) 7, 14, 21, and 28. Three different types of behavior were considered as positive responses to filament stimulation: 1) sharp retraction of the abdomen; 2) immediate licking or scratching of the area of filament stimulation; or 3) jumping. Response frequently was calculated as the percentage of positive response (out of 10) and data were reported as the mean percentage of response frequency ± SE. 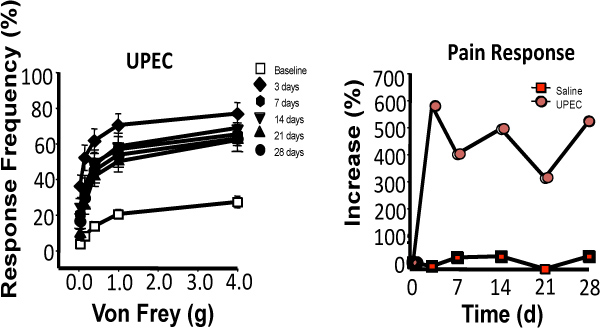 Figure 3. Tactile allodynia induced by UPEC bacteria. Referred visceral hyperalgesia was measured as responses to mechanical stimulation of the pelvic region using von Frey filaments of five calibrated forces. Data are reported as the mean percentages of positive responses ± SE before instillation of bacteria (baseline) and at PIDs 7, 14, 21, and 28. ANOVA indicated a significant increase in response frequency at PIDs 7 to 28 compared with that at the baseline for all filaments tested in UPEC-infected NOD mice (P < 0.05). The percent response at each PID was calculated as total responses to all fibers relative to baseline responses.

Infection of the mouse prostate with UPEC allows for the in vivo modeling of events that may be involved in the pathogenesis of bacterial prostatitis, CP/CPPS or as a predisposing event in chronic inflammation. The methods described for bacterial preparation and instillation draw upon a large body of literature on UPEC models in female urinary tract infection7,14. The model has wide applicability for studying pathogenesis, testing potential vaccine candidates and mechanisms of immune modulation. The ability to follow pain behavior in a quantifiable manner allows for the study of infection-induced pain pathogenesis and potentially as a preclinical model for testing pain therapeutics.

There are several critical steps that determine the success of the mouse infection model. The three-day culture method with shaking and static cultures is performed for optimal expression of pili that are known to be important for UPEC attachment to epithelial cells. It represents a critical step for successful organ colonization by UPEC. The techniques for bacterial growth have been designed specifically for UPEC growth with the OD420 step optimized for obtaining 10 μl of phosphate-buffered saline containing 1 x 108 bacteria7. Other species or strains of bacteria potentially grow at different rates and standardization would be important to derive the appropriate O.D that gives 1 x 108 bacteria. Different strains of bacteria adhere to cells in the bladder and prostate in unique ways that are largely dependent on the virulence factors expressed by the strain14. Successful infection of the murine prostate would therefore be dependent on utilization of an UPEC strain with the appropriate complement of virulence factors. Immediately following the infection, maintaining animals in a lightly anesthetized state for a minimum of 15 min is important to ensure that instilled bacteria have time to attach and initiate pathogenesis before the normal mechanisms of urination clear the instilled volume from the urethra.

Tactile allodynia in mice is a consequence of the underlying visceral pathology and as such is characterized by exquisite host strain specificity. We have previously described that a pathogenic strain of UPEC in male NOD/ShiLtJ mice induces allodynia that peaks in 3 days and is sustained chronically whereas the same strain is incapable of inducing allodynia in C57BL/67 mice2. Our studies suggest UPEC-induced acceleration of autoimmune processes in NOD/ShiLtJ mice as the underlying cause. Thus the host genetic background is important in the development of tactile allodynia. Other important steps that are key to an unbiased and successful measurement of allodynia are ensuring that the tester is always blinded to the identity of the treatment, the same tester is responsible for measurement of all time-points in the experiment, utilization of similar testing times during the day, housing conditions of the mice and ensuring standardized conditions both within time-points in an experiment as well as between experiments.

The murine infection model has a number of limitations that need to be carefully considered during result interpretation. Bacteria instilled intraurethrally have the capability of infecting the bladder as well as the prostate. This complicates the interpretation of any systemic or general parameters as the underlying pathology could be from multiple organs. However, utilization of clinical and prostate derived bacterial strains as well as concurrent examination of the bladder and the prostate allows for appropriate interpretations. In addition, the methodology of infection simulates the likely ascending infection modality in human males.

The infection model described here differs from those previously reported primarily in the strain of UPEC utilized, the host mouse strain and differences in culture techniques6 and volume of bacteria instilled into the urethra15. The present study uses a well-characterized prostate-derived chronic prostatitis UPEC strain to mediate disease2. Earlier studies have used bacteria derived from bladder infections or acute prostatitis that was utilized primarily for examining inflammation associated events but not characterized in terms of tactile allodynia6,15. Numerous other animal models have been reported that utilize autoimmune mechanisms5,16, hormonal manipulation17 and neonatal thymectomies18 to induce prostatitis. While each of these models have some positive attributes, including organ-specific disease pathology and utilization of pre-existing techniques the relevance of these methods to the actual pathogenesis of CP/CPPS is unknown. In contrast, the methodology described in this manuscript refers to a potential mechanism that has been postulated to be an initiator of disease pathogenesis in the prostate. In addition, beyond its utility to understanding CP/CPPS pathogenesis, the techniques could well be utilized in establishing and examining chronic inflammation of the prostate and it's role in BPH (Benign prostatic hyperplasia)and prostate cancer. 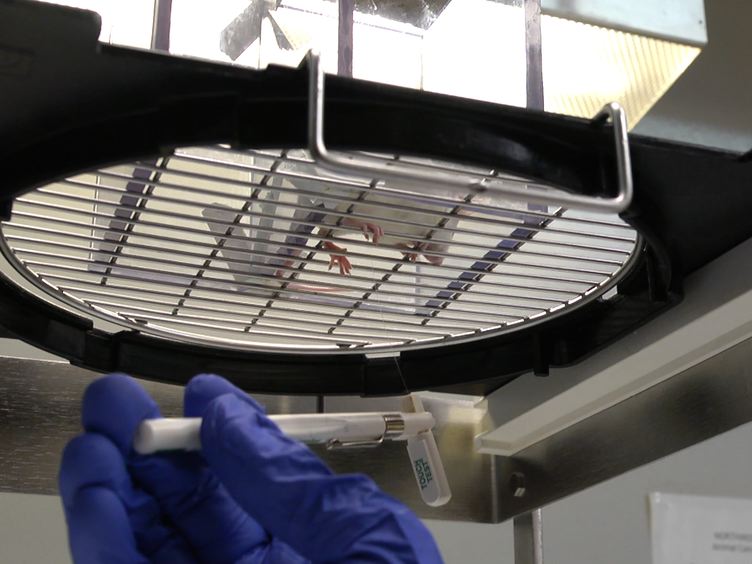