Decellularization and recellularization may enable the generation of functional, transplantable organs in vitro 1. By removing cells and antigenic material (e.g., DNA, alpha-Gal epitopes) from an organ, the non- or less-immunogenic extracellular matrix (ECM) can be obtained. This matrix conserves the three-dimensional microanatomy of an organ and can serve as the ideal biomatrix for repopulation with cells of a different, possibly xenogeneic origin 2. Thus, a decellularized rat liver matrix could be repopulated with human liver cells. This humanized micro-liver could serve as an ex vivo model for research on diseases (e.g., inborn metabolic diseases, viral diseases or malignancies) or for preclinical pharmaceutical testing 3.

In the study detailed here, livers were perfused in a custom-made proprietary perfusion device, enabling perfusion under oscillating pressure conditions. These pressure conditions mimic the physiologic respiratory-dependent perfusion of the liver: in situ, the liver hangs under the copula of the diaphragm, whose movement during respiration has a direct impact on liver perfusion. Inspiration specifically leads to lowering of the diaphragm and squeezing of the liver, optimizing hepato-venous outflow, whereas expiration leads to elevation of the liver and lowering of the intraabdominal pressure to optimize portal-venous inflow 15.

Animals were kept at the Facility for Experimental Medicine (FEM, Charité, Berlin, Germany), and all experimental protocols were reviewed and approved by the State Office of Health and Local Affairs (LAGeSo, Berlin, Germany; Reg. No. O 0365/11).

The homogeneity and thus the effectiveness of different decellularization protocols were evaluated by macroscopic observation, histological analysis, and analysis of the remaining DNA content within decellularized liver matrices. Furthermore, corrosion casting was performed to visualize the intact microanatomy of livers after decellularization. 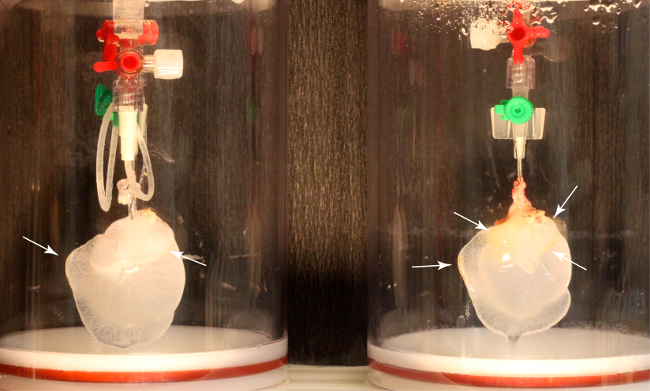 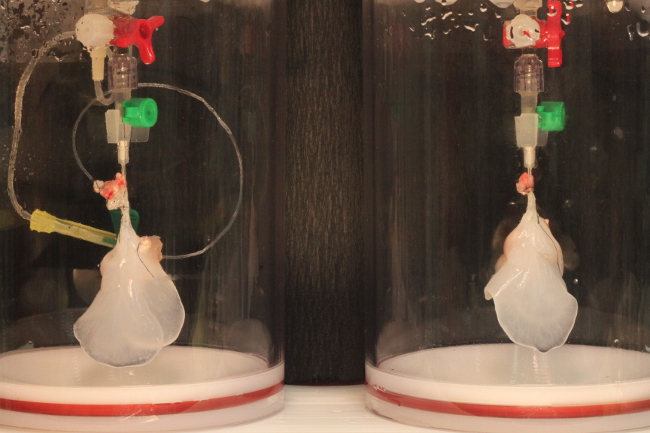 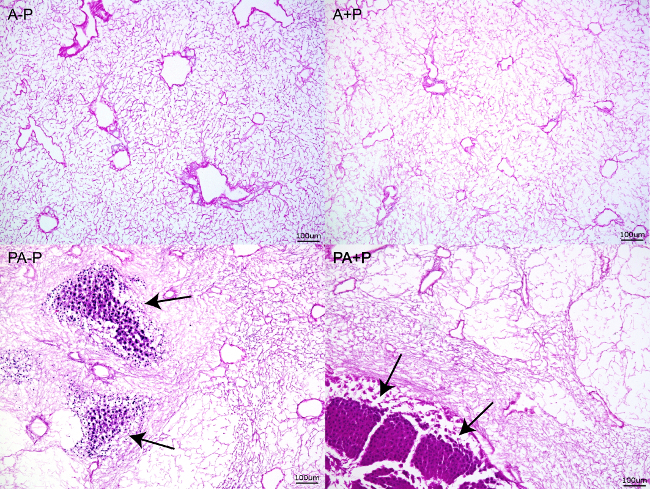 The DNA content per dry weight of liver matrix declined in all experimental groups compared with that in native livers, although differences were only statistically significant in the groups perfused under oscillating pressure conditions (PV+P; A+P). The lowest amount of DNA per dry weight was found in livers perfused via the hepatic artery under oscillating pressure conditions. 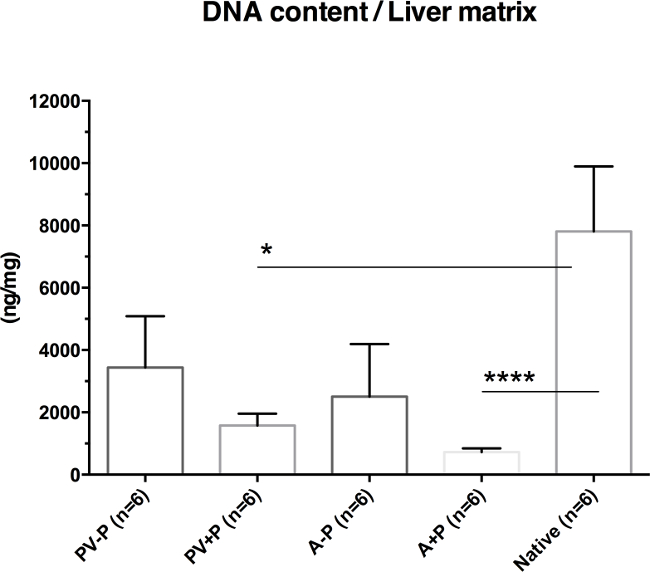 Corrosion casting of decellularized liver matrices confirmed that the microanatomy of livers (including the protein framework of the portal venous system, the arterial system and the biliary system) is conserved during decellularization. 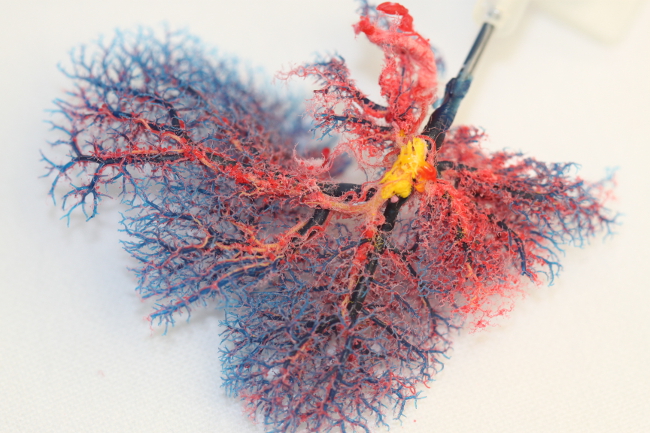 Figure 8: Photograph of a Corrosion Casting of a Decellularized Rat Liver Matrix (modified from Struecker et al. 14). Despite removal of all cells, the microanatomy of the organ, including the portal venous (blue) and arterial (red) systems, are conserved. The remaining main branches of the biliary system are casted in yellow.

Table 1: Experimental Groups for Assessing the Effect of Oscillating Pressure Conditions and the Perfusion Route on Rat Liver Decellularization.

Although the presented technique for rat liver harvesting and decellularization is easily reproducible, there are certain critical steps to consider:

During preparation for liver harvesting, it is important to avoid severe bleeding because it will activate blood coagulation and may lead to blood clot formation within the liver. In our opinion, it is advantageous to incise the abdominal aorta directly before cannulation of the portal vein to avoid blood inflow via the hepatic artery during perfusion via the portal vein. Once the liver is cannulated and clearly perfused, blood clot formation is no longer an issue.

After perfusion is established, whether all tube connectors, three-way valves and tubes are perfectly connected should be re-checked. If livers are perfused for longer durations (e.g., O/N), even a small error in connection can lead to air siphoning into the perfusion system, thus leading to fatal perfusion outcomes.

Our next-generation perfusion devices will be smaller to minimize the amount of perfusion media necessary. Furthermore, pump devices will enable pressure-controlled perfusion.

The presented technique is more sophisticated than other rat liver perfusion devices and shows several clear advantages: 1) The homogenous decellularization is reproducible, with good results when oscillating pressure conditions are applied. 2) The perfusion device is sealed and enables sterile decellularization, which is a prerequisite for matrix repopulation and long-term perfusion. 3) The presented protocol is shorter than other published protocols but is still very effective. 4) Selective perfusion of the portal vein and the hepatic artery renders selective cell repopulation via different systems possible, which may be an important tool.

The perfusion device will be applied in further decellularization experiments to refine and optimize rat liver decellularization. The effect of pressure-controlled perfusion will be experimentally evaluated and compared with flow-controlled perfusion. The addition of further elements (e.g., a “dialysis unit”, a heat exchanger, an oxygenator) for repopulation, culture and maturation experiments appears possible and reasonable to further develop the presented device.

The authors would like to gratefully thank Steffen Lippert, Khalid Aliyev, Korinna Jöhrens and Katharina Struecker for their help during this project. 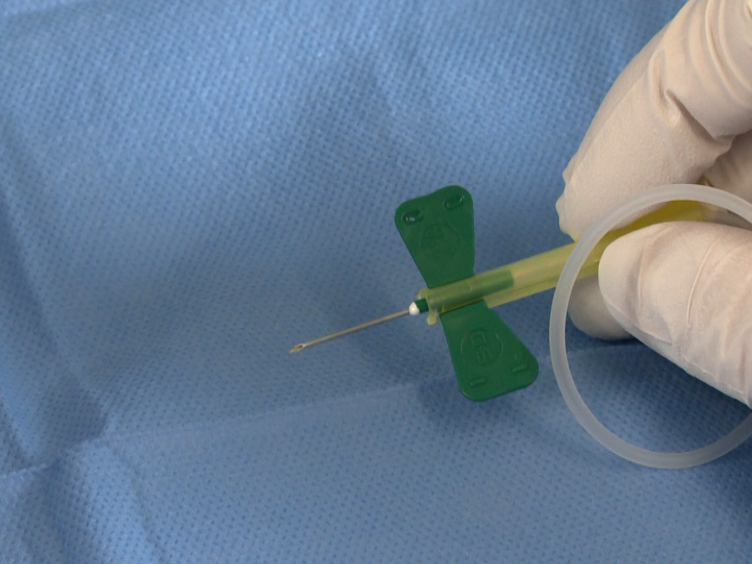