This protocol describes the use of an inertial microfluidics-based buffer exchange strategy to purify micro/nanoparticle engineered cells with efficient depletion of unbound particles.

Engineering cells by agent-loaded micro/nanoparticles (NPs) is a simple, genomic integration-free, and versatile method to enhance bioimaging capability and augment/supplement its native therapeutic properties in regenerative medicine.1-3 Cellular modifications are achieved by labeling the plasma membrane or cytoplasm with an excess concentration of agent-loaded NPs to saturate the binding sites. However, a major drawback of this method is the significant quantities of unbound particles remaining in solution after cell labeling processes, which can potentially confound precise identification of particle-engineered cells or complicate therapeutic outcomes.4,5 In addition, exposure to NPs containing transformative agents (growth factors, corticosteroids, etc.) at excessively high concentration can cause cytotoxicity and misdirected exposure may induce unintended consequences on non-target cells. Even particulate carriers comprising of "biocompatible" materials [e.g., poly(lactic co-glycolic acid), PLGA] can incite potent immune cell responses under certain conditions as well.6 This is especially risky in individuals with impaired immunity (e.g., rheumatoid arthritis) which potentially delays systemic nanoparticle clearance.7 Thus, efficient removal of free particles prior to the introduction of particle-engineered cells is of great importance to minimize toxicity profile and reduce misdirected exposure to agent-loaded particles in vivo.

Conventional gradient centrifugation is often used to separate engineered cells from free particles but is laborious and operated in batch mode. Moreover, shear stresses experienced by cells during high-speed centrifugation and the constituents of the density gradient medium may compromise cell integrity and/or influence cell behavior.8 Microfluidics is an attractive alternative with several separation technologies including deterministic lateral displacement (DLD)9, dieletrophoresis10,11 and acoustophoresis12 developed for small particles separation and buffer exchange applications. However, these methods suffer from low throughput (1-10 µl·min−1) and are prone to clogging issues. Active separations such as dielectrophoresis-based methods also require differences in intrinsic dielectrophoretic cell phenotypes or additional cell labeling steps to achieve separation. A more promising approach involves inertial microfluidics — the lateral migration of particles or cells across streamlines to focus at distinct positions due to dominant lift forces (FL) at high Reynolds number (Re).13 Due to its high flow conditions and superior size resolution, it has often been exploited for size-based cell separation14,15 and buffer exchange applications.16-18 However, buffer exchange performance remains poor with ∼10−30% contaminant solution as the separated cells usually remain close to the boundary between original and new buffer solutions.16-18 More importantly, the size distribution of target cells has to be similar to achieve precise inertial focusing and separation from the original buffer solution which poses an issue especially in the processing of heterogeneous-sized cell types such as mesenchymal stem cells (MSCs).19

After labeling the cells with bio imaging agent-loaded NPs overnight, the labeled cells (containing free particles) are harvested and purified by DFF spiral microdevice to remove free NPs in a single step process (Figure 1A). The 2-inlet, 2-outlet spiral microchannel is designed by engineering software and microfabricated using SU-8 photoresist. The patterned silicon wafer is then used as a template for PDMS replica molding using soft lithography techniques (Figure 1B). To perform cell sorting, the cell sample is pumped into the outer wall inlet of the spiral microdevice while the inner wall inlet runs fresh buffer solution at a higher flow rate (1:10) to pinch the cell sample flow. Separation is achieved by inertial focusing of larger labeled cells at the inner wall and Dean-induced recirculation of small unbound NPs towards the outer wall (Figure 2A). The device was first applied to sort labeled suspension monocytic cells (THP-1) from fluorescent silica NPs loaded with calcein (~500 nm in size). High separation efficiencies were obtained as confirmed by high speed imaging (Figure 2A) and flow cytometry analysis (Figure 2B). Images of eluents collected from device cell outlet also indicated efficient removal of silica and PLGA NPs (~1 - 5 µm) from THP-1 cells. In addition, fluorescence imaging showed that internalized NPs in the labeled THP-1 cells were well retained during DFF purification (insets) (Figure 3). Because of MSC size heterogeneity, the spiral microchannel geometry was subsequently modified by changing the channel height and bifurcation design to enable efficient collection of MSCs (Figure 4). 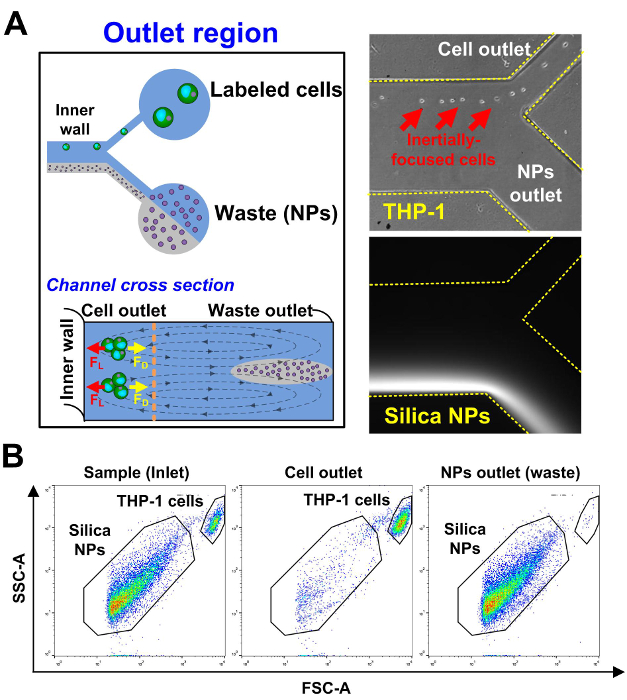 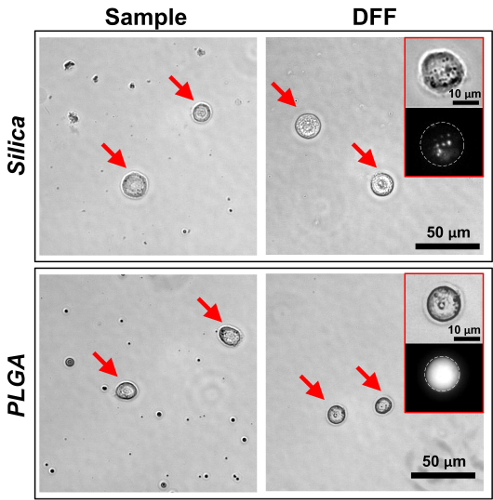 The DFF cell purification technology described herein enables rapid and continuous separation of labeled cells in a high throughput manner. This separation approach is ideal for large sample volume or high cell concentration sample processing, and is better than conventional membrane-based filtration which is prone to clogging after extended use. Similarly, affinity-based magnetic separation requires additional cell labelling steps which are laborious and expensive. The purified cells are shown to retain their labeled agents and cell morphology well (Figure 3) with minimal flow/shear-induced effects (shear stress τ, ~200-250 dyne/cm2) due to short residence time within the channel (< 1 sec) 20,24. In addition, the user can choose the eluted solution of the sorted labeled cells by simply substituting the sheath buffer (saline) with the desired media or buffer solution.

It is critical that there is no dirt or debris in the microchannel prior use which can adversely affect cell focusing behavior. This can be achieved by cleaning the inlet holes thoroughly with IPA, as well as using masking tape to clean the PDMS surface before plasma bonding. Since the microdevice operates under high flow conditions (~1 - 1.5 ml/min), it is also important to heat the bonded PDMS devices on a hotplate to ensure strong bonding between the PDMS and the glass slide. During device operation, if the cells are not focusing well, it means that the flow rates are not sufficient. One can troubleshoot by checking the device inlet region and the syringe tips to ensure that there are no leakages.

Removal of unbound NPs from labeled cells is not trivial since common laboratory separation techniques (e.g., centrifugation) cannot separate particles/cells of different sizes (e.g., unbound particles and labeled cells). While one can argue that repeated washing and changing of culture media can remove free NPs from adherent cells to a certain extent, the process is laborious and ineffective for suspension cell cultures. The DFF microfluidic device utilizes size-based sorting and is highly versatile as it can be used for both suspension and adherent cells with a large size range, as well as removal of NPs of different materials. If the target cells are of different sizes, the DFF device can be optimized by changing the flow conditions or channel geometry (e.g., channel height and ratio of inner and outer channel widths) to achieve efficient separation. It has been previously demonstrated that DFF is superior compared to conventional centrifugation in NPs removal with minimal cell loss.22 Furthermore, cell recovery performance remained high (>90%) when the sample concentration was increased to 107 cells/ml. This is a key improvement over existing inertial microfluidic cell separation methods which are generally limited to 105 cells/ml capacity due to cell-cell interaction and cell overcrowding at equilibrium positions.25

While the DFF technology achieves separation based on size difference, it cannot be used for other cell engineering processes such as separation of labeled and unlabeled cells due to negligible change in cell size. Cell surface markers for affinity-based sorting and other common separation modalities (magnetic susceptibility and electrical conductivity) could be considered for such potential applications. DFF technology is also not suitable for multiplexed cell sorting based on fluorescence. A better option would be to use fluorescence activated cell sorting (FACS) for single-step sorting of labelled cells with different fluorescence which operates at high throughput, but requires expensive and bulky equipment.

Finally, this protocol is highly useful for the purification of engineered cells when NPs containing transformative agents (growth factors, drugs, corticosteroids, etc.) are used for bioimaging and/or cell therapy. This is because remnant free NPs can exert off-target transformative effects on neighboring cells or immune cells that respond to these foreign particles when injected in vivo. It may also unintentionally generate signals that can be misleading during bioimaging. Removal of these free NPs prior to usage thus reduce risk to non-target cells, minimize compilations in immune system, and reduce contamination issues between steps during sequential labeling/engineering of cells. Its successful implementation greatly facilitates cell labeling and enables the interference-free usage of particle based cell engineering in therapy. 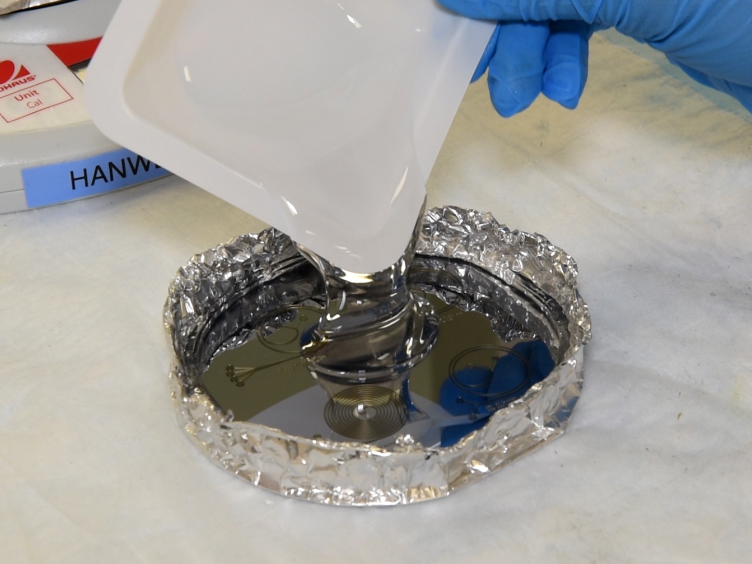