Peptide competition assays are widely used in a variety of molecular and immunological experiments. This paper describes a detailed method for an in vitro oligopeptide-competing kinase assay and the associated validation procedures, which may be useful to find specific phosphorylation sites.

Protein phosphorylation at specific sites determines its conformation and interaction with other molecules. Thus, protein phosphorylation affects biological functions and characteristics of the cell. Currently, the most common method for discovering phosphorylation sites is by liquid chromatography/mass spectrometry (LC/MS) analysis, a rapid and sensitive method. However, relatively labile phosphate moieties are often released from phosphopeptides during the fragmentation step, which often yields false-negative signals. In such cases, a traditional in vitro kinase assay using site-directed mutants would be more accurate, but this method is laborious and time-consuming. Therefore, an alternative method using peptide competition may be advantageous. The consensus recognition motif of 5' adenosine monophosphate-activated protein kinase (AMPK) has been established1 and was validated using a positional scanning peptide library assay2. Thus, AMPK phosphorylation sites for a novel substrate could be predicted and confirmed by the peptide competition assays. In this report, we describe the detailed steps and procedures for the in vitro oligopeptide-competing kinase assay by illustrating AMPK-mediated nuclear factor erythroid 2-related factor 2 (Nrf2) phosphorylation. To authenticate the phosphorylation site, we carried out a sequential in vitro kinase assay using a site-specific mutant. Overall, the peptide competition assay provides a method to screen multiple potential phosphorylation sites and to identify sites for validation by the phosphorylation site mutants.

The most common method used to discover phosphorylation sites is liquid chromatography/mass spectrometry (LC/MS) analysis. Rapid and highly sensitive phosphorylation site mapping data can be generated this way; however, it has several technical limitations, often generating false-negative signals. Poor sequence coverage frequently occurs in LC/MS analysis. To identify phosphorylation sites, information on the maximal amino acid coverage of a protein is required6. Proteolysis of the protein of interest with several proteases during the digestion step may be of help in improving sequence coverage. Another obstacle for the identification of phosphorylation residues is the facile loss of phosphoric acid that is frequently observed for serine- and threonine-phosphorylated peptides6,7. Labile phosphate moieties are often released from phosphopeptides during the fragmentation process7. The second option when searching for phosphorylation sites is using a peptide microarray method. It is possible to screen for the kinase target sites using a microarray chip containing peptide fragments derived from a protein of interest. However, due to the equipment requirement for the production and detection of a microarray chip, the peptide microarray method is considered time-consuming and expensive.

To overcome these challenges, an in vitro oligopeptide-competing kinase assay can be used for a protein kinase with known recognition motifs. If the consensus recognition motif of a kinase is established, putative phosphorylation sites of a candidate substrate can be predicted, and the authenticity of the sites can be validated. The most convincing method for this procedure is to show the abrogation of phosphorylation in a mutant protein in which the predicted residue is substituted with a non-phosphorylatable amino acid (i.e., serine or threonine to alanine; tyrosine to phenylalanine). However, the production and isolation of mutant proteins is time-consuming. As an alternative at the initial stage of research, the competitive peptide kinase assay is straightforward and convenient. Here, we describe a protocol for an in vitro peptide competition assay and for the validation of the phosphorylation site.

CAUTION: This protocol uses [γ-32P]-ATP to assess the activity of AMPK. Phosphorus-32 is a radioactive isotope, largely emitting beta radiation. Since the size of a beta particle is extremely small, it can easily penetrate clothing and skin. Both external and internal exposure to beta radiation may be harmful to human health, including by causing skin burns and tissue damage.

Figure 1 and Figure 2 demonstrate the outcomes from repeated experiments in the previously reported paper8. Three different 10-residue oligopeptides mimicking the putative AMPK target sites (#1, 148-157 comprising Ser153; #2, 330-339 comprising Ser335; and #3, 553-562 comprising Ser558) were synthesized and used as competitors in the in vitro kinase assay. The phosphorylation of Nrf2 by AMPK was greatly diminished in the presence of oligopeptide #3 (Figure 1). Next, a site-directed mutagenesis assay was performed to validate the result of the peptidomimetic experiment. Given the inhibitory effect of oligopeptide #3 on the AMPK-mediated phosphorylation of Nrf2 (Figure 1), we generated a S558A-Nrf2 mutant. The phosphorylation levels were compared between the wildtype Nrf2 and the S558A mutant using the in vitro AMPK kinase assay. The single amino acid substitution of Nrf2 (Ser→Ala at 558) prevented AMPK from phosphorylating Nrf2, indicating that AMPK directly phosphorylates Nrf2 at Ser558 (Figure 2). 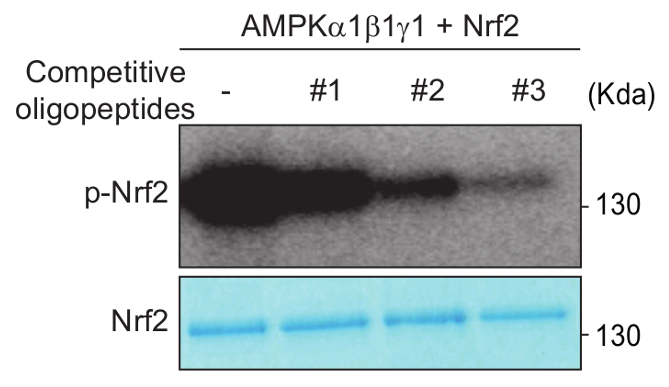 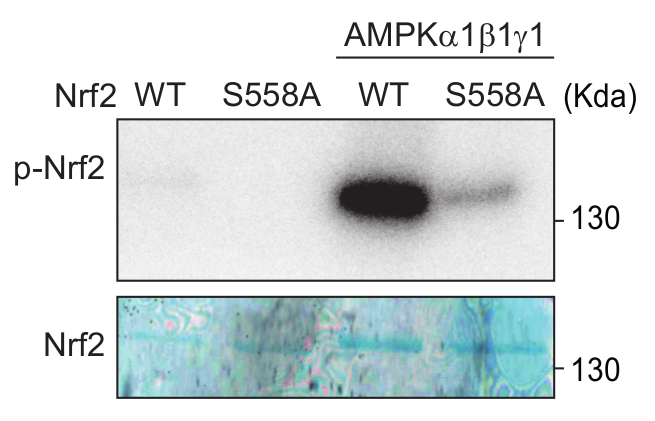 Figure 2: In vitro AMPK kinase assay using a site-specific mutant protein. In vitro kinase assays were done in the presence of wildtype GST-Nrf2 or its S558A mutant.

As a simple and convenient way to assess the authenticity of the predicted phosphorylation sites mediated by AMPK, here we describe an in vitro kinase assay that can be used to discover a specific phosphorylation site using competitive peptides and to verify it using a site-specific mutant. The representative data obtained from the in vitro competitive AMPK activity assay matched the results from an assay using a site-directed mutant protein, indicating that the peptide competition assay is a useful tool for determining a phosphorylation site. This method was also used in the study identifying the specific site phosphorylated by PKCδ, which phosphorylates Nrf2 at serine 403. Since peptides competitively bind to a protein, the principle may also be applied to an in vitro GST pull-down assay to identify a binding motif10,11. Moreover, this peptidomimetic method may also be applicable to the identification of other post-translational modifications, such as acetylation at lysine residues.

Using this protocol, it may be difficult to dissolve some hydrophobic peptides. If a peptide is insoluble in a kinase buffer, dissolving it in 20% DMSO may be helpful. To dissolve extremely hydrophobic peptides, first attempt to dissolve it in 100% DMSO and then dilute the solution with a kinase buffer. Sonication may also be of help in dissolving the peptides. If it remains insoluble, a peptide mimicking the putative site should be extended to increase the solubility.

The protocol introduced in this paper describes an "in vitro system" in which a purified kinase and substrate are reacted. In the in vitro system, small differences in the concentration of competitive peptides will not affect the results unless the concentration is lower than the substrate protein. The result obtained from an in vitro experiment includes the inherent possibility of being an artefactual event produced by artificial proximity and the high concentration of reactants. To eliminate this prospect, the interpretation of the data should be accompanied by the outcomes from cell-based experiments. Another possibility for obtaining false-positive results using peptides may be due to alterations in substrate conformation and/or kinase recognition. To exclude this possibility, it is necessary to do confirmation experiments with mutant proteins.

On the other hand, false-negative data can also be produced from this system. Many kinases act as protein complexes within the cellular context and require co-factors for full functionality. AMPK is a representative protein kinase complex composed of AMPKα, AMPKβ and AMPKγ subunits, and the binding of AMP to the AMPKγ subunit is necessary for the activation of the kinase. Indeed, AMPK did not phosphorylate Nrf2 in an AMP-free kinase buffer (data not shown). Thus, it should be noted that AMP must be dissolved in the kinase reaction buffer for a successful in vitro assay. 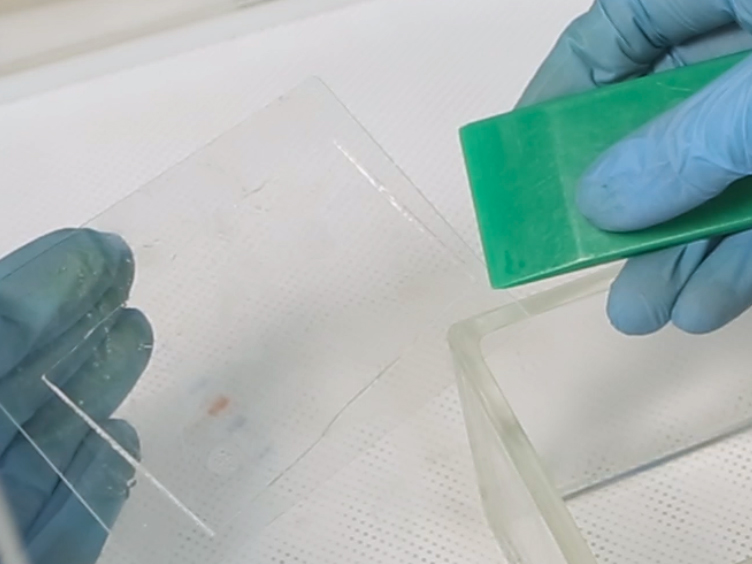