This protocol illustrates a safe and efficient procedure to modify CD133+ hematopoietic stem cells. The presented non-viral, magnetic polyplex-based approach may provide a basis for the optimization of therapeutic stem cell effects as well as for monitoring the administered cell product via magnetic resonance imaging.

While CD133+ hematopoietic stem cells (SCs) have been proven to provide high potential in the field of regenerative medicine, their low retention rates after injection into injured tissues as well as the observed massive cell death rates lead to very restricted therapeutic effects. To overcome these limitations, we sought to establish a non-viral based protocol for suitable cell engineering prior to their administration. The modification of human CD133+ expressing SCs using microRNA (miR) loaded magnetic polyplexes was addressed with respect to uptake efficiency and safety as well as the targeting potential of the cells. Relying on our protocol, we can achieve high miR uptake rates of 80–90% while the CD133+ stem cell properties remain unaffected. Moreover, these modified cells offer the option of magnetic targeting. We describe here a safe and highly efficient procedure for the modification of CD133+ SCs. We expect this approach to provide a standard technology for optimization of therapeutic stem cell effects and for monitoring of the administered cell product via magnetic resonance imaging (MRI).

Despite their high potential demonstrated in more than 30 approved clinical trials (ClinicalTrails.gov), their therapeutic outcome is still under controversial discussion4. Indeed, a clinical application of SCs is hampered by low retention in the organ of interest and massive initial cell death5,8,9. Additional engineering of CD133+ SCs prior transplantation could help overcome these challenges.

One prerequisite for an efficient cell therapy would be the reduction of the massive initial cell death to enhance the engraftment of therapeutic relevant cells10. Current studies demonstrated an immense cell loss of 90–99% in highly perfused organs such as the brain and heart during the first 1–2 h, independent of the transplanted cell type or application route11,12,13,14,15,16,17,18,19,20,21. SC labeling using magnetic nanoparticles (MNPs) enables an innovative non-invasive strategy to target cells to the site of interest22,23,24,25,26 and simultaneously allows cell monitoring using MRI27 and magnetic particle imaging (MPI). The most efficient in vivo studies applying magnetized cell targeting used cell retention after local administration in preference to cell guidance after intravenous injection23,24,28. Therefore, our group designed a delivery system consisting of superparamagnetic iron oxide nanoparticles29. With this technique, CD133+ SCs and human umbilical vein endothelial cells (HUVECs) could efficiently be targeted, as demonstrated by in vitro attempts30,31.

Another hurdle for SC therapies is the hostile inflammatory environment of the affected tissue after transplantation, which contributes to the initial cell death32. In addition to several pre-conditioning studies, the application of therapeutic relevant miRs was tested33; it has been successfully demonstrated that anti-apoptotic miRs inhibit apoptosis in vitro and enhance cell engraftment in vivo33. These small molecules, composed of 20–25 nucleotides, play a crucial role as posttranscriptional modulators of messenger RNAs (mRNAs), and thus affect stem cell fate and behavior34. Moreover, the exogenous introduction of miRs avoid the undesired stable integration into the host genome34.

Current attempts for efficient introduction of nucleic acids (NAs) into primary SCs are mostly based on recombinant viruses8,35. Despite the high transfection efficiency, recombinant virus manipulation presents a major obstacle for a bench-to-bedside translation, e.g., uncontrollable gene expression, pathogenicity, immunogenicity, and insertional mutagenesis35,36. Therefore, non-viral delivery systems such as polymer-based constructs are critical to develop. Among those, polyethylenimine (PEI) represents a valid delivery vehicle offering benefits for miRs such as NA condensation to protect from degradation, cellular uptake, and intracellular release through endosomal escape37,38. Furthermore, miR-PEI complexes demonstrated a high biocompatibility in clinical trials39. Therefore, our delivery system consists of a biotinylated branched 25 kDa PEI bound to a streptavidin-coated MNP-core30,31,40.

In this manuscript, we present a comprehensive protocol describing (i) the manual isolation of CD133+ SC from human bone marrow (BM) donation with a detailed characterization of the SC product and (ii) an efficient and gentle transfection strategy of a magnetically non-viral polymer-based delivery system for genetic engineering of CD133+ SCs using miRs. CD133+ SCs are isolated and magnetically enriched from human sternal BM aspirates using a surface antibody-based magnetic-activated cell sorting (MACS) system. Afterwards, the cell viability as well as the cell purity are analyzed using flow cytometry. Subsequently, miR/PEI/MNP complexes are prepared and CD133+ SCs are transfected. 18 h after transfection, the uptake efficiency and the impact of transfection on SC marker expression and cell viability are analyzed. Moreover, evaluation of the intracellular distribution of the transfection complex compounds is performed using four-color labeling and structured illumination microscopy (SIM).

Sternal human BM for cell isolation was obtained from informed donors, who gave their written consent to use their samples for research according to the Declaration of Helsinki. The ethical committee of the University of Rostock has approved the presented study (reg. No. A 2010 23, prolonged in 2015).

NOTE: During this step, keep the entire work space ribonuclease (RNAse)-free using RNAse decontamination solution and use only RNAse-free consumable material
NOTE: The following work should be carried out in a room protected from bright light (dim lighting only).

4. Analysis of the miR Transfection

The presented protocol describes a manual isolation and magnetic enrichment of human BM-derived CD133+ SCs with a subsequent virus independent cell engineering strategy, as a non-invasive technology for in vitro cell manipulation and in vivo monitoring tool.

This three-step isolation technology permits a separation of MNCs from the pre-digested sternal BM through density gradient centrifugation. Afterwards, a CD133+ cell fraction can be magnetically enriched using the appropriate isolation technology. This allows an enrichment of CD133+ SCs with a viability and purity higher than 80%, which can be determined by flow cytometry (Figure 1). Hereinafter, only SC products which match the requirements were used for further experiments.

The transfection method described here allows a highly effective introduction of miR in these freshly isolated human CD133+ SCs with an uptake of approximately 80% of viable cells (Figure 2)30. In addition, there are no significant cytotoxic effects evident 18 h after transfection compared to control cells (Figure 2)30. Moreover, a sufficient delivery and usual distribution of the transfection complex compounds (miR, PEI, and MNPs) can be observed within the cytoplasm of cells using SIM (Figure 3). 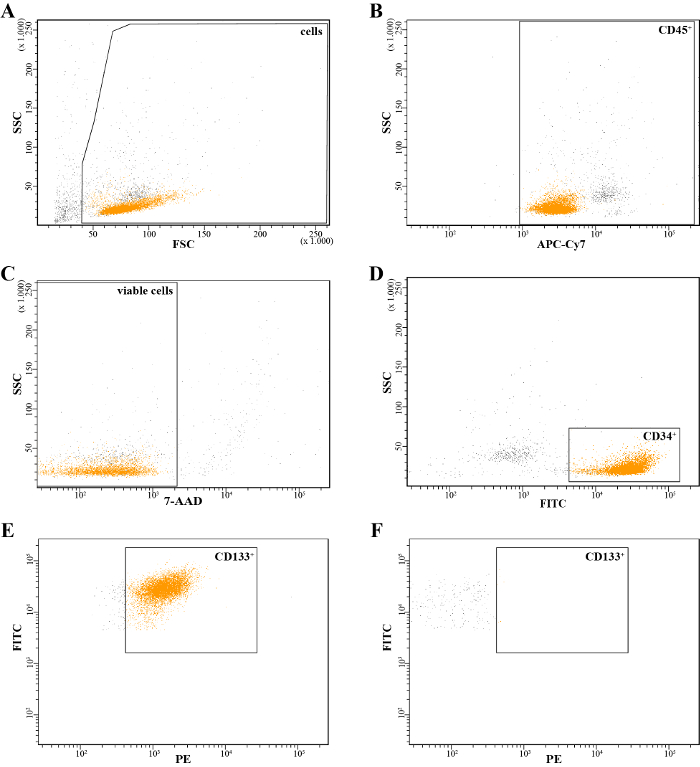 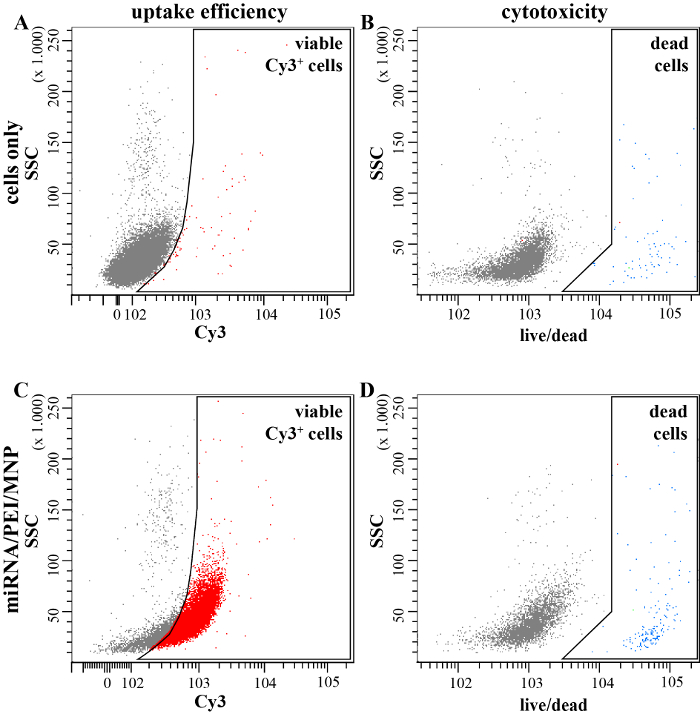 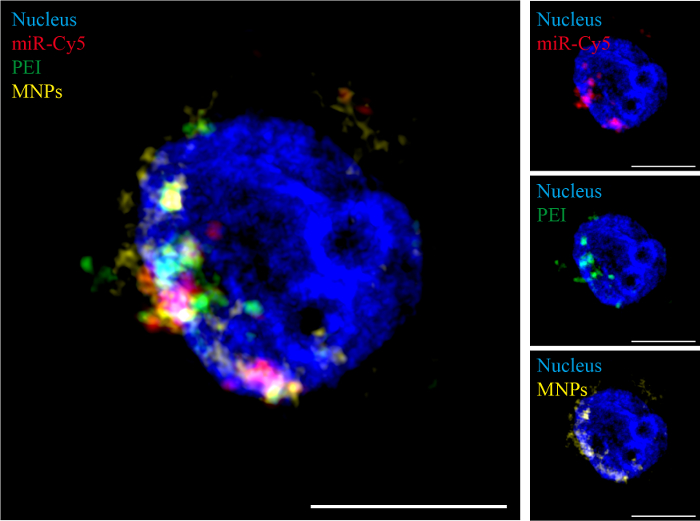 In recent years, CD133+ SCs have emerged as a promising cell population for SC-based therapies as evidenced by several phase I, II, and III clinical trials43,44,45,46,47,48,49,50,51,52,53,54. Here, we present a detailed protocol for the standardized manual purification and flow cytometric characterization of these cells from human sternal BM. The described MACS-based isolation procedure represents a gentle, fast, and efficient strategy to obtain a highly pure and viable hematopoietic SC fraction. The good compatibility combined with the rapid degradation of co-injected MACS MicroBeads used for cell sorting has been demonstrated previously by our group55,56.

This isolation procedure was developed using human sternal BM as a source material, and therefore, the protocol currently enables purification of hematopoietic SCs intended for use in non-clinical research. If CD133+ SCs are isolated from other tissues (e.g., BM obtained from iliac crest) several steps of the protocol such as enzymatic tissue digestion and density centrifugation may require adaption. For clinical cell application, our group further established a GMP-conformant on-site manufacturing procedure using the an automatic system in order to satisfy additional demands on behalf of clinical needs57.

Engineering of SCs prior to their application is a novel strategy to overcome certain obstacles in SC therapy, including low cell retention and massive cell death. The current protocol comprises instructions for the production of a viral-free multifunctional transfection system based on branched PEI bound to MNPs and its efficient introduction into the CD133+ SCs30. Application of this system enables genetic cell modification, magnetically controlled cell guidance, and non-invasive cell tracing via MRI or MPI30,31,40,42,58,59,60.

Importantly, the described transfection conditions have been optimized for transient genetic modification of CD133+ BM-derived SCs30. In previous works, this transfection system has been also successfully applied for the delivery of plasmid DNA and miR to other cell types31,40,60. These experiments have demonstrated that transfection efficiency as well as cytotoxicity are cell type-dependent. Therefore, the optimal compositions of NAs, PEI, and MNPs need to be defined for each cell type.

Due to its high efficiency, PEI is one of the most commonly used polymers for non-viral genetic cell engineering61. However, the clinical application61,62 of PEI is very limited to date because of its general toxicity61,63. Interestingly, our group recently demonstrated that MNPs reduce PEI toxicity when included in the transfection system31,60. At the same time, the possible toxicity of iron oxide based nanoparticles caused by the production of reactive oxygen species (ROS) is dose-dependent and several types of superparamagnetic nanoparticles are approved for MRI64,65. However, attention must be paid to the toxicity of the system in vitro and in vivo.

Overall, the protocol is quite complex, containing many critical steps that need to be very carefully addressed. For this purpose, we have highlighted these points in the protocol section with notes. In particular, we wish to point out the importance of a completely RNAse-free environment and avoiding any light exposure when handling the applied fluorescent dyes. 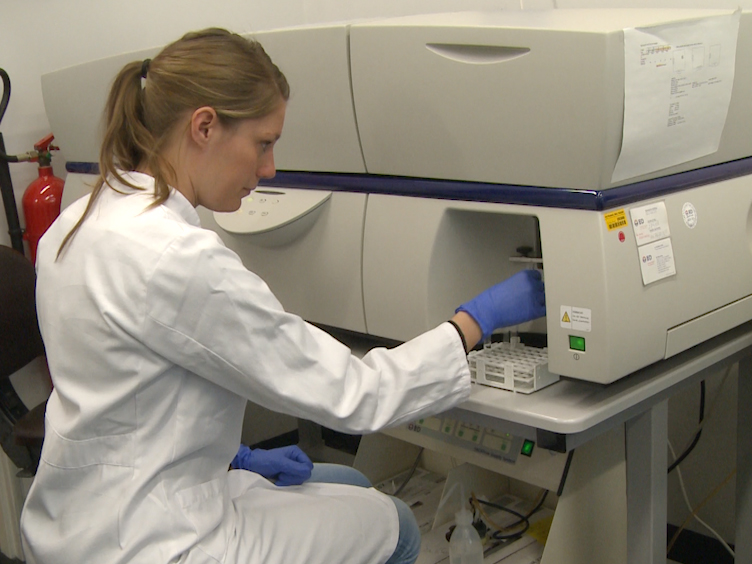