Presented here is a protocol to isolate various subsets of macrophages and other non-immune cells from human and mouse myocardium by preparing a single cell suspension through enzymatic digestion. Gating schemes for flow cytometry based identification and characterization of isolated macrophages are also presented.

Macrophages represent the most heterogeneous and abundant immune cell populations in the heart and are central in driving inflammation and reparative responses after cardiac injury. How various subsets of macrophages orchestrate the immune responses after cardiac injury is an active area of research. Presented here is a simple protocol that our lab performs routinely, for the extraction of macrophages from mouse and human myocardium specimens obtained from healthy and diseased individuals. Briefly, this protocol involves enzymatic digestion of cardiac tissue to generate a single cell suspension, followed by antibody staining, and flow cytometry. This technique is suitable for functional assays performed on sorted cells as well as bulk and single cell RNA sequencing. A major advantage of this protocol is its simplicity, minimal day to day variation and wide applicability allowing investigation of macrophage heterogeneity across various mouse models and human disease entities.

Recently, we have shown that the human myocardium also contains two distinct subsets of macrophages identified similarly as either CCR2- or CCR2+8. Gene expression and functional analyses revealed that human CCR2- and CCR2+ macrophages represent functionally divergent subsets and are functionally analogous to CCR2- and CCR2+ macrophages found in the mouse heart. Human CCR2- macrophages express robust levels of growth factors, including IGF1, PDGF, Cyr61, and HB-EGF. CCR2+ macrophages are enriched in chemokines and cytokines that promote inflammation, such as IL-1b, IL-6, CCL-2, CCL-7, and TNF-a. Stimulated CCR2+ macrophages secrete markedly higher levels of the inflammatory cytokine interleukin-1β (IL-1β) in culture. How these subsets differentially contribute to tissue repair and left ventricular (LV) remodeling in the context of cardiac injury remains an area of active research.

Flow-cytometry based analysis of macrophage heterogeneity in the mouse and human heart requires digesting the cardiac tissue and generating a single cell suspension followed by flow cytometric analysis or cell sorting for further downstream processes such as bulk RNA sequencing/single cell RNA sequencing or culturing the cells for functional assays. The original protocol for making a single cell suspension from murine hearts were first reported by Nahrendorf group in Nahrendorf et al. 200710. Our lab has adapted and modified the protocol to extract macrophages from the human myocardium. Using the same protocol but with slight modification in staining and gating scheme, CD45- stromal cells from the human myocardium can also be harvested. Presented here, in text and video, is a protocol that is performed routinely for the extraction of macrophages or stromal from the human myocardium.

Cardiac tissue specimens are obtained from adult patients with dilated cardiomyopathy (DCM: idiopathic or familial) or ischemic cardiomyopathy (ICM) undergoing left ventricular assist device (LVAD) implantation or cardiac transplantation. Explanted hearts or LVAD cores are intravascularly perfused with cold saline prior to starting the digestion procedure. It is important to note that "quality" of tissue specimen determined in terms of degree of scarring or adipose tissue infiltration can greatly affect the yield of macrophages. Heart specimens with large areas of scarring will have much lower cell yield and can pose serious technical limitation when desired downstream analysis methods require in vitro cell culturing.

The protocol presented has been approved by the Washington University in St. Louis Institutional Review Board (#201305086). All subjects provide informed consent before sample collection and the experiments are performed in accordance with the approved study protocol. The presented protocol is performed with the approval of the Institutional Animal Care and Use Committee at Washington University School of Medicine and follows the guidelines described in the NIH Guide for the Care and Use of Laboratory Animals.

The protocol described allows isolation of macrophages from mouse and human myocardium. Using the same protocol, but with a different staining and gating strategy, stromal cells can also be harvested from the human myocardium. FACS results presented here were acquired either on BD LSRII or BD FACS ARIA III platform. Compensation controls were generated from single color control samples from stained splenocytes. Figure 1 shows unprocessed and processed human LVAD core. Figure 2 shows the gating scheme for the flow sorting of CCR2- and CCR2+ human macrophages. Figure 3A shows the gating scheme for CD45- stromal cells from human myocardium and Figure 3B shows images of Wright stained FACS sorted CD45+ and CD45- cells. Figure 4 describes the gating scheme to sort macrophages from a mouse heart. 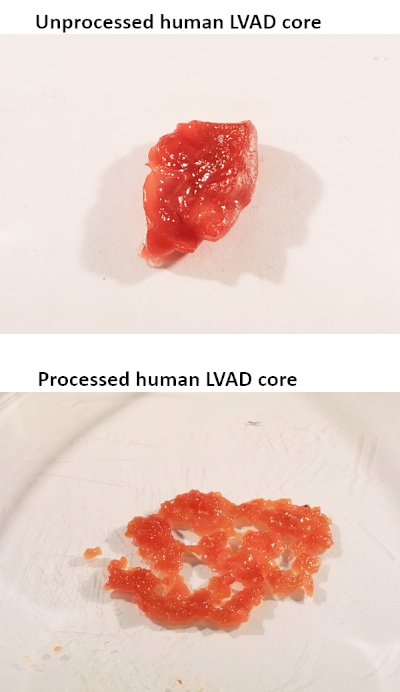 Figure 1: The human LVAD tissue core before and after processing. Please click here to view a larger version of this figure. 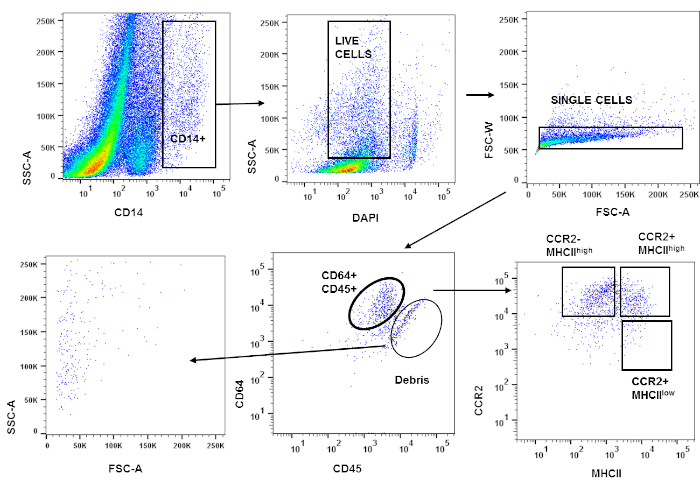 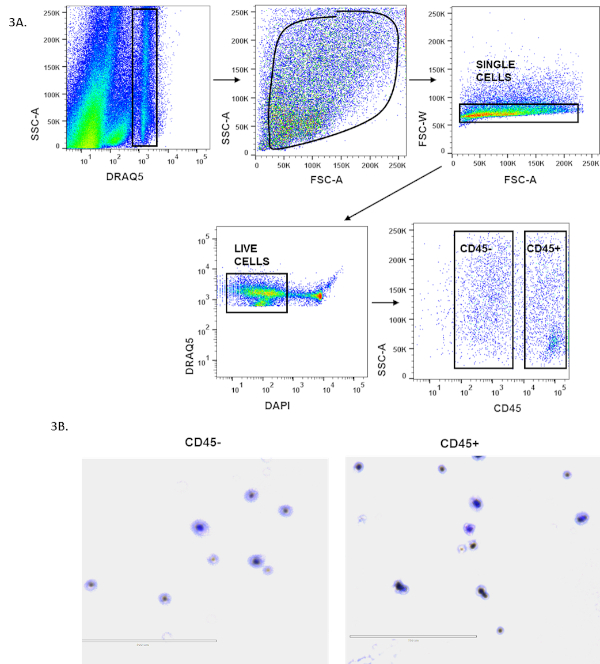 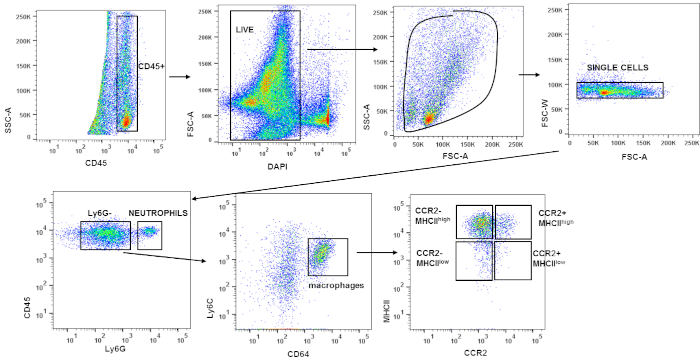 The protocol allows for the extraction of various macrophage subsets from human myocardium. The protocol is simple and takes 3 to 4 hours to prepare single cell suspension ready for FACS analysis. Although the protocol is relatively simple to perform, there are certain technical aspects that need to be considered which will minimize variability. Firstly, working in timely fashion with human tissue is necessary for optimal cell viability. It is important to keep the tissue in cold saline/HBSS to minimize cell death. It is also necessary to remove epicardial fat and other connective tissue from the myocardial specimen. Consistent tissue mincing and digestion times will reduce sample to sample variation.

There is both intra-assay and inter-assay variability in tissue digestions and subsequent cell yields. This is one of the limitations in preparing a single cell suspension from tissues. The most important way to minimize this is by making sure enzymes are relatively new, properly aliquoted, and stored at -80 °C. Aliquots should be used one time only and should not be saved or frozen again. Enzymes used are sensitive to freeze thaw cycles. Another consideration is temperature of digestion and shaking speed. Using a thermostat-controlled shaker that evenly distributes heat helps to minimize digestion variability and improve cell viability.

It is important to mention that absolute yield of macrophages from human myocardium is generally not very high. Usually the cell yield varies from ~20,000 to 50,000 total macrophages per 1,200-1,500 mg of tissue. This becomes challenging when the desired downstream method of analysis involves cell culture assays. Phagocytosis, chemokine/cytokine production, cell stimulation, morphometry, and gene expression analyses (microarray, bulk RNA sequencing, and single cell RNA sequencing) can be easily performed. The quality of the tissue also determines the ease of digestion and subsequent cell yield. If the tissue is fibrous and scarred, digestion efficiency is suboptimal, and macrophage yield is likely to be very low.

Another aspect to consider is that myocardial tissue digestion leads to significant debris formation. This causes the pellet to appear loose. Thus, one must be careful to not discard the supernatant during wash steps by simple decanting. Using a suction/vacuum waste collection flask with a Pasteur pipette to collect the supernatant is advisable. Also, maintaining the centrifuge at 4 °C will help minimize the cell death and sample loss.

Although this protocol describes a way to extract macrophages from human myocardial tissue samples, successful isolation of macrophage subsets can also be achieved from mouse hearts without significant changes or modifications. 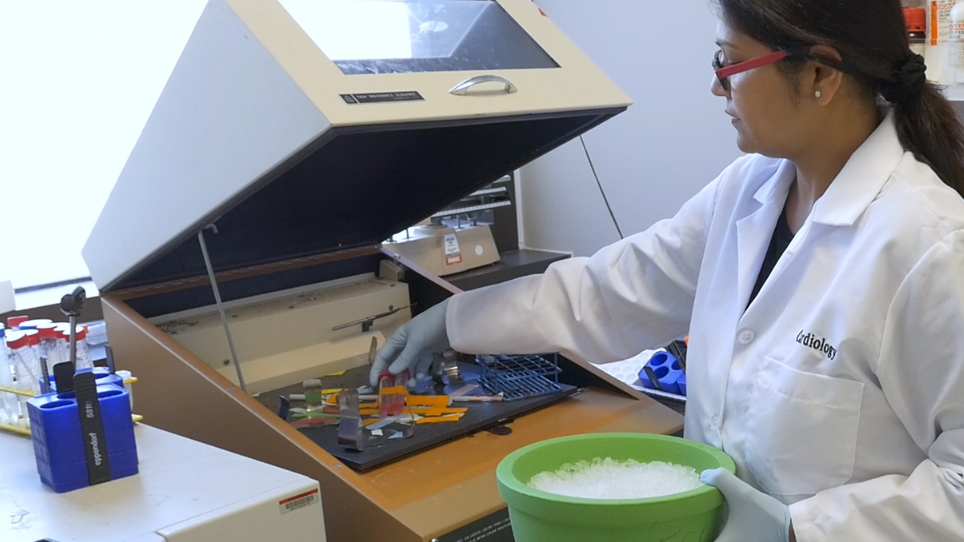