This article shows how to perform the external cephalic version (ECV) by two experienced obstetricians in the obstetric operating room in the presence of an anesthesiologist and a midwife. The ECV is carried out with analgesia and tocolysis. Two attempts are made under ultrasonography control.

External cephalic version (ECV) is an effective procedure for reducing the number of cesarean sections. To date, there is no video publication showing the methodology of this procedure. The main objective is to show how to perform ECV with a specific protocol with tocolysis before the procedure and analgesia. Moreover, we describe and analyze the factors associated with successful ECV, and also compare to deliveries in the general pregnant population.

A retrospective and descriptive analysis of ECV carried out at the Hospital Clinico Universitario Virgen de la Arrixaca in Murcia (Spain) between 1/1/2014 and 12/31/2018 was assessed. The latest data available of labor deliveries in the local center, which is the biggest maternity department in Spain, were from 2018.

ECV is an effective procedure to reduce the number of cesarean sections for breech presentations. Maternal BMI and previous vaginal delivery are associated with ECV success. Successful ECV does not modify the usual delivery pattern.

External cephalic version (ECV) is a procedure for modifying the fetal position and achieving a cephalic presentation. The objective of the ECV is to offer an opportunity for cephalic delivery to occur, which is widely known to be safer than breech or cesarean section. ECV is usually performed before the active labor period begins. Factors associated with a higher ECV success rate include1,4: multiparity, a transverse presentation, black race, posterior placenta, amniotic fluid index higher than 10 cm.

However, ECV is not an innocuous procedure and may present7,11 intraversion complications such as premature rupture of membranes, vaginal bleeding, transitory changes of fetal heart rate, cord prolapse, abruptio placentae, even stillbirth.

In this article, we analyzed ECVs performed under analgesia and tocolysis. To date, no video report has been published showing how to perform this procedure with analgesia and tocolysis. The main objective of this study is to show how ECV is performed. We also describe some key actions that could improve the procedural success. As a secondary objective, we analyzed the results of ECV obtained following the specific protocol with tocolysis and analgesia and compared the results with the literature. We also analyzed factors associated with ECV success rate, type of delivery and a comparison of the type of delivery in ECV pregnant women with non-ECV pregnant women were also included.

This study was approved by the Clinic Research Committee of the "Virgen de la Arrixaca" at the University Clinical Hospital. Written informed consent was obtained from all participants.

3. Admit in the obstetric delivery room

Three hundred and twenty patients were recruited between January 1, 2014 and December 31, 2018. Three patients were lost during the follow-up after the ECV because delivery was not carried out in our hospital.

Statistics were derived from the raw data. To study the differences between groups, unpaired Student's t-tests were used for quantitative variables and chi-square tests for dichotomous variables. All tests were two-tailed at a 0.05 significance level.

The factors related with the ECV procedure success in the logistic regression multivariant model (Table 3) were previous vaginal delivery with an adjusted OR=3.029 (1.62-5.68) and BMI with an adjusted OR=0.942 (0.89-0.99). Pregnant women with a previous vaginal delivery were 2.03 times more likely to have ECV success than nulliparous. If BMI was categorized (Table 4), patients with a BMI above 40 kg/m2 had an adjusted OR=0.091 (0.009-0.89) if they were compared with those with a BMI lower than 25 kg/m2 whereas a one unit increase in maternal BMI was associated with a 5.8% decrease in ECV success rate. 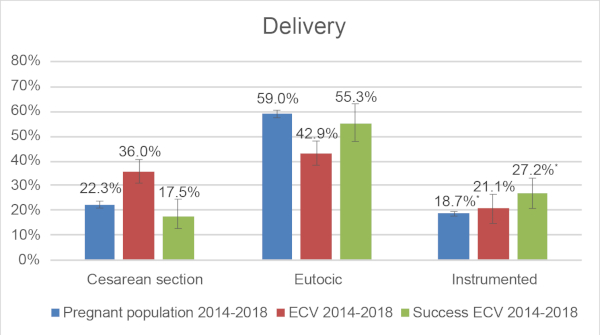 This article shows the procedure to carry out the ECV. The ECV procedure success rate in this study is 82.5% (78.1-86.4%), which is higher than the success rate found in international literature 49.0% (47-50.9%)1,2,3,4 or Spanish literature 53.49% (42.9-64.0%)5,6,7. This difference may be due to the use of tocolytic agents before the procedure, as proposed by Velzel et al.8, the gestational age at which ECV is performed, the experience acquired by the four obstetricians who carry out the ECV at the center, as suggested by Thissen D et al.9, the use of analgesia or the presence of an anesthesiologist and a midwife.

The use of external cephalic version in breech presentation, according to WHO10, certainly reduces the incidence of caesarean section, which is of special interest in those units where vaginal breech delivery is not a common practice.

There are some crucial steps in the protocol that make it different from others. Having the patient empty her bladder before the procedure, the use of tocolysis only before the ECV or analgesia with propofol or spinal anesthesia may contribute to the higher success rate obtained in the study.

The bladder volume plays an important role in the ECV success. Levin et al.11 highlighted the importance of starting the procedure with an empty bladder, reporting an OR=2.5 (1.42-4.34) for successful ECV if the bladder had a volume below 400 mL. All the participants in this study had an empty bladder.

The rate of complications obtained in this study is 5.94% (3.7-8.9%), which is similar to the rate found in literature 6.1%1,15. No more than two attempts are proposed to perform ECV in the protocol. The National Society of Gynecology and Obstetrics recommends no more than 4 attempts16 to avoid abruptio placentae and fetal heart rate disturbance. We have reduced this to 2 attempts in order to be more cautious with the procedure due to the fact that tocolysis and analgesia might induce the obstetricians to apply greater forces.

After an ECV, the instrumented delivery rate increased compared to the general population, as de Hundt et al.18 described. In the study, ECV is associated with an instrumented delivery with OR=1.63 (1.22-2.17), while some authors18 reported an OR=1.4 (1.1-1.7). The reasons why women after a successful ECV have an increased risk for instrumented delivery compared with the general pregnant population remain unclear. Some studies have reported that breech fetuses are biologically different from cephalic-presenting fetuses with a lower weight, lower fetoplacental ratio and smaller head circumference18,20. These suggest that breech fetuses might tolerate labor worse and show earlier signs of fetal distress.

In the literature1,2,3,4, many factors are considered to influence in ECV success rate such as parity, amniotic fluid index, posterior placenta and breech presentation. However, we have just found a statistical association between parity and ECV success rate with an adjusted OR=3.029 (1.62-5.68) and maternal BMI with an adjusted OR=0.942 (0.89-0.99). Other factors have been associated with the failure of ECV such as: maternal age, gestational age at ECV, previous cesarean and estimated fetal weight1,2,3,4. However, no significantly statistical associations were found in the study. Future investigation is needed to evaluate different protocols of ECV including previous aspect and analgesia method.

Finally, we can conclude that ECV is an effective procedure to reduce the number of cesarean sections in fetuses with breech presentations. Maternal BMI and previous vaginal delivery are associated with success in ECV. Successful ECV does not modify the usual delivery pattern in comparison with the general population. 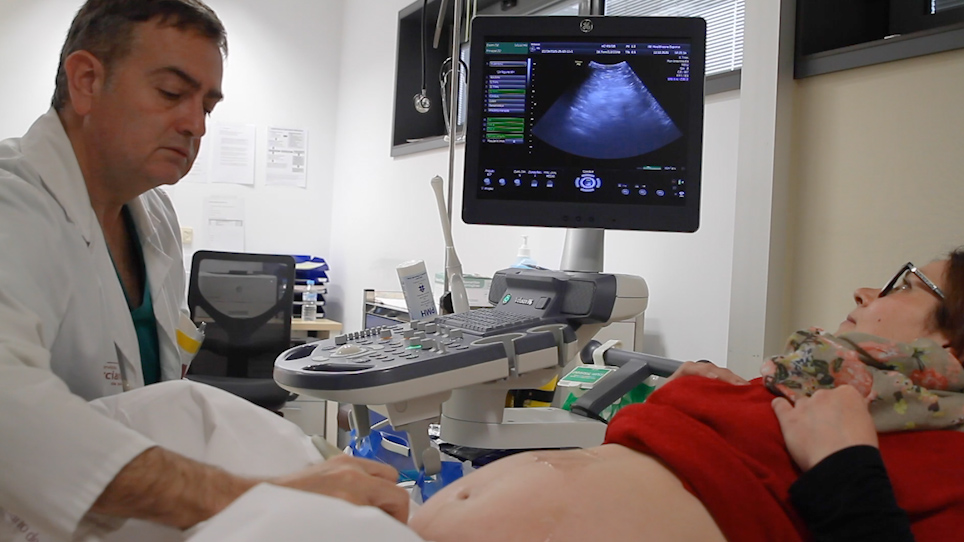