Acyl-RAC (Acyl-Resin Assisted Capture) is a highly sensitive, reliable and easy to perform method to detect reversible lipid modification of cysteine residues (S-acylation) in a variety of biological samples.

Protein S-acylation, also referred to as S-palmitoylation, is a reversible post-translational modification of cysteine residues with long-chain fatty acids via a labile thioester bond. S-acylation, which is emerging as a widespread regulatory mechanism, can modulate almost all aspects of the biological activity of proteins, from complex formation to protein trafficking and protein stability. The recent progress in understanding of the biological function of protein S-acylation was achieved largely due to the development of novel biochemical tools allowing robust and sensitive detection of protein S-acylation in a variety of biological samples. Here, we describe acyl resin-assisted capture (Acyl-RAC), a recently developed method based on selective capture of endogenously S-acylated proteins by thiol-reactive Sepharose beads. Compared to existing approaches, Acyl-RAC requires fewer steps and can yield more reliable results when coupled with mass spectrometry for identification of novel S-acylation targets. A major limitation in this technique is the lack of ability to discriminate between fatty acid species attached to cysteines via the same thioester bond.

S-acylation is a reversible post-translational modification involving addition of a fatty acyl chain to an internal cysteine residue on a target protein via a labile thioester bond1. It was first reported as a modification of proteins with palmitate, a saturated 16-carbon fatty acid2, and therefore this modification is often referred to as S-palmitoylation. In addition to palmitate, proteins can be reversibly modified by a variety of longer and shorter saturated (myristate and stearate), monounsaturated (oleate) and polyunsaturated (arachidonate and eicosapentanoate) fatty acids3,4,5,6,7. In eukaryotic cells, S-acylation is catalyzed by a family of enzymes known as DHHC protein acyltransferases and the reverse reaction of cysteine deacylation is catalyzed by protein thioesterases, most of which still remain enigmatic8.

Metabolic labeling with radioactive ([3H], [14C] or [125I]) palmitate was one of the first approaches developed to assay protein S-acylation12,13,14. However, radiolabeling-based methods present health concerns, are not very sensitive, time consuming, and only detect lipidation of highly abundant proteins15. A faster and nonradioactive alternative to radiolabeling is metabolic labeling with bioorthogonal fatty acid probes, which is used routinely to assay dynamics of protein S-acylation16. In this method, a fatty acid with a chemical reporter (alkyne or azide group) is incorporated into the S-acylated protein by a protein acyltransferase. Azide-alkyne Huisgen cycloaddition reaction (click chemistry) can then be used to attach a functionalized group, such as a fluorophore or biotin, to the integrated fatty acid allowing for detection of the S-acylated protein17,18,19.

Acyl-biotin exchange (ABE) is one of the extensively used biochemical methods for capture and identification of S-acylated proteins that bypasses some of the shortcomings of metabolic labeling such as unsuitability for tissue samples15. This method can be applied for analysis of S-acylation in a diverse range of biological samples, including tissues and frozen cell samples20,21. This method is based on selective cleavage of the thioester bond between the acyl group and the cysteine residue by neutral hydroxylamine. The liberated thiol groups are then captured with a thiol-reactive biotin derivative. The generated biotinylated proteins are then affinity-purified using streptavidin agarose and analyzed by immunoblotting.

An alternative approach termed acyl-resin assisted capture (Acyl-RAC) was later introduced to replace the biotinylation step with direct conjugation of free cysteines by a thiol-reactive resin22,23. This method has fewer steps compared to ABE and similarly can be used to detect protein S-acylation in a wide range of samples1.

The captured proteins can then be analyzed by immunoblotting or subjected to mass spectrometry (MS) based proteomics to assess the S-acylated proteome in a varied range of species and tissues22,24,25. Individual S-acylation sites can also be identified by trypsin digestion of the captured proteins and analysis of the resulting peptides by LC-MS/MS22. Here, we demonstrate how acyl-RAC can be used for simultaneous detection of S-acylation of multiple proteins in both a cell line and a tissue sample.

Mice used in this protocol were euthanized according to NIH guidelines. The Animal Welfare Committee at University of Texas Health Science Center in Houston approved all animal work.

NOTE: All subsequent steps can be performed at room temperature (RT).

4. Elution and detection of S-acylated proteins

Following the protocol described above, we first used acyl-RAC to simultaneously detect S-acylation of several proteins in Jurkat cells, an immortalized T cell line originally derived from the peripheral blood of a T cell leukemia patient27. Regulatory T cell proteins previously identified as S-acylated9,28,29 were chosen to demonstrate the utility of this method. As shown in Figure 2A, tyrosine kinase Lck can be detected in lysates treated with neutral 2 M hydroxylamine to cleave the thioester bond between cysteine residues and a fatty acid moiety (+ HAM lane). The sample treated with 2 M NaCl (- HAM lane) represents an important negative control, indicating the selectivity of the assay for detection of the thioester bonds. The input lane further confirms the specificity of the signal and can serve as a positive control if the protein of interest is not S-acylated. The membrane was then stripped and reprobed with antibodies against proteins Fyn and LAT to demonstrate that the acyl-RAC assay can be used to analyze S-acylation of multiple proteins at the same time (Figure 2A).

To demonstrate the utility of this method to detect protein S-acylation in tissue samples, we applied the acyl-RAC protocol to the mouse spleen. As shown in Figure 2B, S-acylation of Lck, Fyn and LAT can be readily detected in primary mouse splenocytes indicating that this modification is conserved between two species. 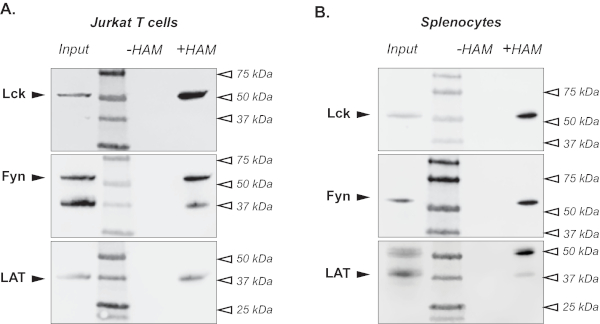 Figure 2. Detection of S-acylated proteins. An acyl-RAC assay was used to detect S-acylation of T cell signaling proteins in Jurkat T cells (A) and murine spleen tissue (B). Immunoblotting with Lck-, Fyn- and LAT-specific antibodies shows S-acylation of these proteins in the hydroxylamine treated sample (+ HAM lane). A sample treated with sodium chloride (- HAM lane) serves as negative control. Untreated lysates are shown in the input lane. Please click here to view a larger version of this figure.

Table 1: Buffer composition of commonly used buffers required in the protocol. 2SHB buffer and Buffer A can be prepared in advance but their pH must be checked regularly. Lysis buffer and HAM must be prepared the day of experiment.

Here, we successfully utilized the acyl-RAC assay to detect S-acylation of selected proteins in both cultured human cells and primary cells derived from mouse tissue. This method is simple, sensitive, and can be easily performed with minimal equipment requirements using standard biochemistry techniques. This method has been shown to successfully identify novel S-acylated proteins such as the β-subunit of the protein translocating system (Sec61b), ribosomal protein S11 (Rps11), and microsomal glutathione-S-transferase 3 (MGST3)22. The sensitivity and adaptability of acyl-RAC makes it suitable to study protein S-acylation in a variety of biological samples.

A significant fraction of S-acylated proteins can be associated with glycosphingolipid-enriched parts of the plasma membrane, also known as lipid rafts. Thus, some S-acylated proteins might not be fully extracted if mild detergents, such as Triton X-100, NP-40 or Brij58, are used for lysis30. Anionic detergents (such as SDS) or maltoside based non-ionic detergents (such as n-dodecyl β-D-maltoside (DDM)) can be used to ensure dissociation of lipid rafts and full recovery of the proteins of interest30,31,32. In this protocol, we used DDM, a mild, lipid-like non-ionic detergent that has been demonstrated to be effective in membrane protein extraction and maintaining their stable native state over prolonged periods33.

An incomplete blockade of cysteine residues can cause binding of non-acylated proteins to TS, thus resulting in a high background evident by high signal in the –HAM samples. The background binding can be substantially reduced by an additional incubation with a thiol-crosslinking agent-2,2’-dithiodipyridine as described in a modified ABE protocol by Zhou et al.36.

In contrast to metabolic labeling, acyl-RAC is not limited to live cells and can be performed to detect protein S-acylation in freshly isolated or frozen tissue samples. Since the acyl-RAC protocol avoids an immunoprecipitation step, it can be used to simultaneously detect lipidation of multiple proteins of interest in the same assay, thus potentially reducing the amount of biological material required in a single experiment. However, metabolic labeling-based assays are more suitable for experiments aimed to specifically detect de novo S-acylation or measure fatty acid turnover rates on a protein of interest. Another important limitation of acyl-RAC is that this technique is unable to distinguish between different fatty acids that can be covalently bound to the cysteine residues via the same thioester bond3,4,5,6,7.

Both acyl-RAC and ABE assays are based on selective cleavage of the thioester bond between the cysteine residue and a fatty acid to reveal a free thiol group. Since acyl-RAC uses direct pull-down of S-acylated proteins by a thiol-reactive resin, this method requires fewer steps in comparison to ABE. Although similar, proteome-wide studies of S-acylation show some variation in the proteins detected using these two methods, most likely due to the technical differences. For example, in rat brain homogenate, ABE-based analysis identified 241 S-acylated proteins whereas acyl-RAC-based analysis identified 14425. 61 proteins in the rat brain proteome were commonly detected by both methods underscoring the need for use of multiple techniques to ascertain the S-acylation status of a protein.

Another potential drawback of acyl-RAC and ABE methods is the inability to reliably evaluate stoichiometry of S-acylation and determine the number of lipidated cysteines. A modification of these techniques, termed acyl-PEG exchange or PEG-shift assay, was developed to address these limitations37,38. In this method, pull-down step following hydroxylamine cleavage is substituted by incubation with a PEG-maleimide mass-tag. Resulting PEGylation of the exposed free cysteine residues can be observed as mass shift by SDS-PAGE.

In conclusion, acyl-RAC is a fast, sensitive and reliable method that can provide valuable insights into dynamics of protein S-acylation under both physiological and pathophysiological conditions in a great variety of biological samples. Considering limitations of the method discussed above, a combination of acyl-RAC with other techniques is recommended to fully characterize S-acylation of a protein of interest. 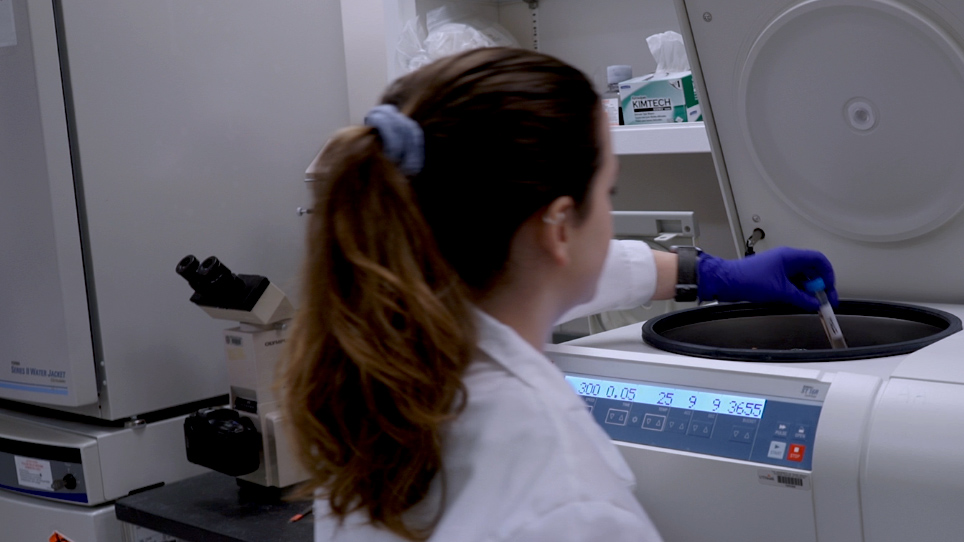