Organ failure is one of the main causes of death1. Transplantation of cells, tissues and organs is an effective way to treat organ failure2. Nevertheless, the shortage of donor organs limits the clinical application of this method3,4. Studies have shown that pigs can be used as a potential source of human organs for clinical transplantation5,6. However, cross-species organ transplantation faces dangerous immune rejection. Therefore, it is crucial to monitor the immune rejection of xenotransplantation. Currently, clinical monitoring of immune rejection depends mainly on the patient's signs and symptoms, as well as laboratory tests (e.g., biopsy, immunobiochemical analysis, and ultrasound)7,8,9. However, these monitoring methods have many disadvantages. The signs and symptoms of immune rejection in patients usually appear late10, which is not conducive to early detection and early intervention; biopsy has the disadvantage of being invasive11, which is not easy for patients to accept; immunobiochemical analysis lacks sensitivity or specificity, and ultrasound is auxiliary and expensive. Therefore, it is urgent to find an effective and convenient method to monitor the immune rejection.

Circulating DNA has been proven to be a minimally-invasive biomarker for detecting cancers17,18,19. High through-put sequencing of donor-derived circulating DNA is reliable for the detection of rejection after organ transplantation20,21. However, this method requires a high concentration and quality of extracted DNA. The DNA requirements in addition to the high cost and time-consumption make this method ineligible for routine clinical use. Donor-derived circulating DNA can be precisely quantified by quantitative real-time PCR (qPCR), which is both specific and sensitive. Therefore, quantifying porcine circulating DNA by qPCR is a feasible method to monitor the immune rejection of xenotransplantation. This is less invasive, highly sensitive and specific, low cost, and time-saving. Pigs and human beings are genetically separate with quite different genomic sequences (Figure 1). Therefore, circulating porcine DNA can be released into the recipient's blood post-xenotransplantation because of xeno-rejection. CpsDNA could be precisely quantified by qPCR with species-specific primers in the recipient’s blood. Previously, we have demonstrated the rationale and feasibility of cpsDNA as a biomarker for xenotransplantation22,23. Here, we disclose more experimental tips and details. The experiment consists of the following steps. Firstly, porcine specific primers were designed, and genomic DNA was isolated, which were used to verify the specificity of the primers by regular PCR. Secondly, constructing the standard curve of cpsDNA and isolating cpsDNA from the sample blood. Finally, the circulating pig-specific DNA was quantified using qPCR.

All experiments were performed in accordance with the relevant guidelines and regulations of the Institutional Review Board of Shenzhen Second People's Hospital, First Afﬁliated Hospital of Shenzhen University.

3. Verify the specificity of the primers

NOTE: Species specificities of the above 19 primers were confirmed by PCR, which was performed using polymerase (Table of Materials) and primers presented in Table 1.

In this protocol, porcine specific primers were designed, plasmids-containing porcine specific DNA fragments were constructed, and standard curves for quantitation were established (Figure 4). Species specificities of the 19 primers were confirmed by PCR. Species-specific primers (primer #4 and primer #11) were then used to quantify cpsDNA by qPCR in pig-to-mouse cell transplantation models and pig-to-monkey artery patch transplantation models.

Agarose electrophoresis was used to isolate amplified DNA fragments from the above samples, which is then visualized in an ultraviolet imager. Using PCR, the primers specific for amplified porcine genomic DNA was first identified (Figure 2A). Further, certain species-specificities of these primers that specifically amplified pig DNA in the cohort of monkey/human genomic or in the cohort of mouse genomic DNA were confirmed (Figure 2B). Finally, two species-specificities primers were further proven to specifically amplify pig DNA in the pig-to-monkey artery patch and/or pig-to-mouse cell transplantation models, respectively (Figure 2C). 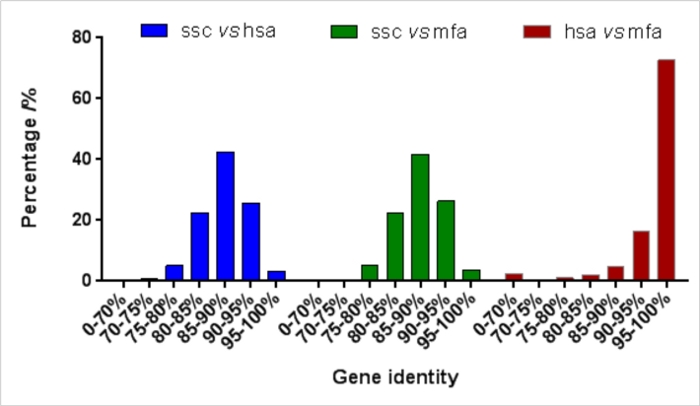 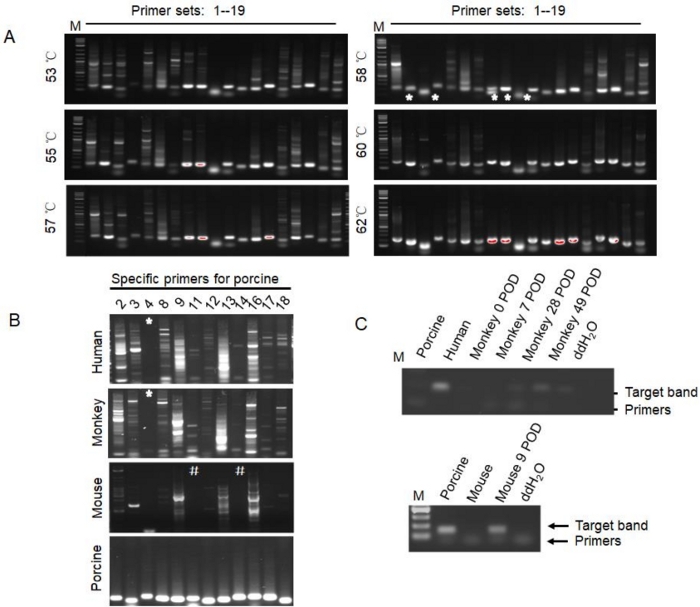 Figure 2: Regular PCR validates specificity of porcine specific primers. (A The pig genomic DNA fragments were amplified by primers 1-19. (B) The human/monkey/mice genomic DNA fragment could not be amplified by some primers (primer #4 and #11). The stars (*) indicate no amplifications in human/monkey genomic DNA. The pound sign (#) indicates no amplification in mouse genomic DNA. (C) The two species-specificities primers (primer #4 and #11) were further proven to specifically amplify pig DNA in the pig-to-monkey artery patch and/or pig-to-mouse cell transplantation models, respectively22. Please click here to view a larger version of this figure. 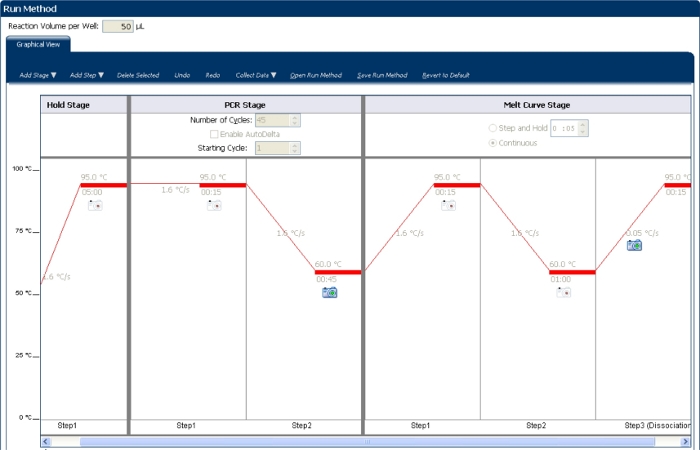 Figure 3: The procedure for the qPCR reaction22. Please click here to view a larger version of this figure. 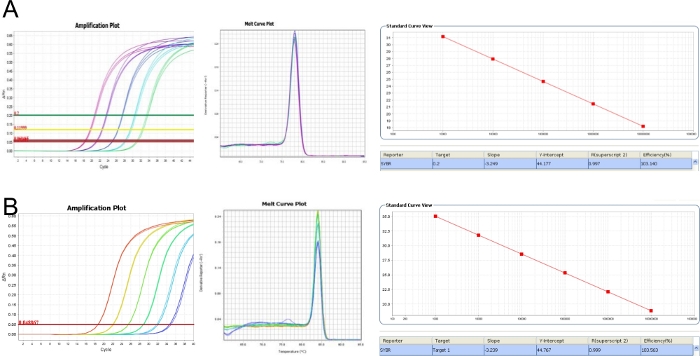 Figure 4: Establishment of the standard curve for absolute quantification. The amplification plots, the melt curve plots, and the standard curve views of (A) primer #4 and (B) primer #11 from the qPCR machine (see Table of Materials) are exhibited. A good standard (R value close to 1, amplification efficiency is within 100%±5%) could be used for up to half a year22. Please click here to view a larger version of this figure.

Quantifying porcine circulating DNA represents a feasible approach to monitor the immune rejection of xenotransplantation. Gadi et al.24 found that donor-derived circulating DNA (ddcfDNA) content in the blood of patients with acute rejection was significantly higher than that of patients without rejection. These studies suggest that ddcfDNA may be a common biomarker for monitoring organ graft damage. In recent years, qPCR has increasingly been applied to the analysis of nucleic acids because of its simple operation, high degree of automation, high sensitivity, good specificity, and low cost.

In this study, porcine specific primers were designed based on the results of bioinformatics analysis. Their specificity was verified by regular PCR. The cpsDNA of the blood samples of the pig-to-monkey artery patch models and the pig-to-mouse cell transplantation models could be precisely quantified by qPCR with species-specific primers. The main advantages of the approach are as follows. Firstly, based on the highly specific primers, this method of quantifying DNA is highly sensitive and specific. In addition, the protocol of the approach is very simple to perform, which consisted of design of specific primers, isolation of DNA, and qPCR analysis in one working day, which is timesaving. It is a non-invasive method that starts from a small volume of serum or plasma material. Meanwhile, we have demonstrated that this method is highly reproducible22. In contrast to high-throughput sequencing and flight mass spectrometry, this method is low cost.

Monitoring immune rejection by quantification of circulating pig-specific DNA in the blood of pig-to-monkey artery patch models and pig-to-mouse cell transplantation models using qPCR has laid the foundation for the basic research and the clinical application of porcine-human xenotransplantation.

The authors report no conflicts of interest.