Pre-mRNA splicing is a very dynamic process that involves many molecular rearrangements of the spliceosome subcomplexes during assembly, RNA processing, and release of the complex components. Glycerol gradient centrifugation has been used for the separation of protein or RNP (RiboNucleoProtein) complexes for functional and structural studies. Here, we describe the utilization of Grafix (Gradient Fixation), which was first developed to purify and stabilize macromolecular complexes for single particle cryo-electron microscopy, to identify interactions between splicing factors that bind transiently to the spliceosome complex. This method is based on the centrifugation of samples into an increasing concentration of a fixation reagent to stabilize complexes. After centrifugation of yeast total extracts loaded on glycerol gradients, recovered fractions are analyzed by dot blot for the identification of the spliceosome sub-complexes and determination of the presence of individual splicing factors.

Splicing is a highly dynamic process that requires binding and release of a multitude of factors in a coordinated manner. These splicing factors include RNA binding proteins, ATPases, helicases, protein kinases and phosphatases, ubiquitin ligases, among others1,2,3; and to allow for the molecular rearrangements to take place, some of these factors bind very transiently to the spliceosome subcomplexes, making the isolation and identification of these RNP intermediate complexes very challenging.

Here, we used the Grafix method4,5 to stabilize the interaction of the yeast splicing factor Cwc24 with the Bact complex6 to allow for the identification of other factors bound concomitantly to that subcomplex and determine whether the ubiquitin ligase Prp19 plays any role in the binding or release of Cwc24 to the Nineteen (NTC) complex and to the 5’ end of the intron before activation and the first transesterification reaction takes place. The advantage of exposing the macromolecules to an increasing concentration of the crosslinker along the glycerol gradient is that it avoids inter-complexes crosslinks4,5, and therefore, the formation of aggregates.

This method was used as a complementation to protein coimmunoprecipitation and pull-down assays, which, despite allowing the isolation of large complexes, may not be reliable for maintaining transient interactions within large dynamic complexes7,8. The use of fixation reagents in the glycerol gradient stabilizes the binding of such factors, allowing the confirmation of interactions of specific proteins with splicing subcomplexes. Because the chosen crosslinker was chemically irreversible, proteins present in the recovered fractions were analyzed by dot blot after the gradient centrifugation.

To analyze the sedimentation profile of Cwc24-TAP and determine whether the Grafix method was effective to stabilize its binding to splicing subcomplexes, we separated total yeast extracts of cells expressing Cwc24-TAP through centrifugation on glycerol gradients, in the presence or absence of glutaraldehyde as a crosslinking agent. Samples of twenty-four 500 μL fractions were then analyzed by slot blot with antibody against the CBP portion of the TAP tag. The results show that in the absence of the crosslinker, Cwc24 is concentrated between fractions 5 and 13 (Figure 1B), corresponding to complexes of about 80 to 200 MDa14. In the presence of the crosslinker, however, the position of Cwc24 on the gradient is shifted to fractions at the bottom of the gradient, corresponding to larger complexes (Figure 1). These results indicate that glutaraldehyde stabilizes the association of Cwc24 with splicing complexes.

In order to establish whether the complexes retaining Cwc24 correspond to the Bact complex, which is formed by snRNPs U2, U5, and U6 and the NTC complex, we compared Cwc24 sedimentation to those of the U5 snRNP subunit Prp8 and the NTC subunit Prp19. Yeast strains expressing either of these proteins fused to the TAP tag were subjected to Grafix, followed by dot blot for the detection of the proteins. These three spliceosome subunits showed similar profiles, sedimenting with larger complexes at the bottom of the gradient. Cwc24 is concentrated in the same fractions, but because it associates transiently with the spliceosome, it is also present in the lighter fractions (Figure 2). Quantification of the dots shows these profiles (Figure 2B).

Interestingly, fractions 11 and 12 are those where Prp8 and Prp19 start to concentrate, suggesting that this is the portion of the gradient where Bact complex starts to sediment. To ascertain that these proteins are bound to complexes in these fractions, aliquots of fractions 11 and 12 were subjected to electrophoresis on native gels and subsequently to western blot. Signals of Prp8 and Prp19 appear as smears that barely enter an 8% acrylamide gel, showing that indeed they are part of large complexes (Figure 3). Cwc24 is also present in fraction 12, but in much lower concentration, consistent with its transient binding to the Bact complex. These results show that glutaraldehyde can be used as a crosslinker to stabilize the binding of transient factors to splicing subcomplexes. 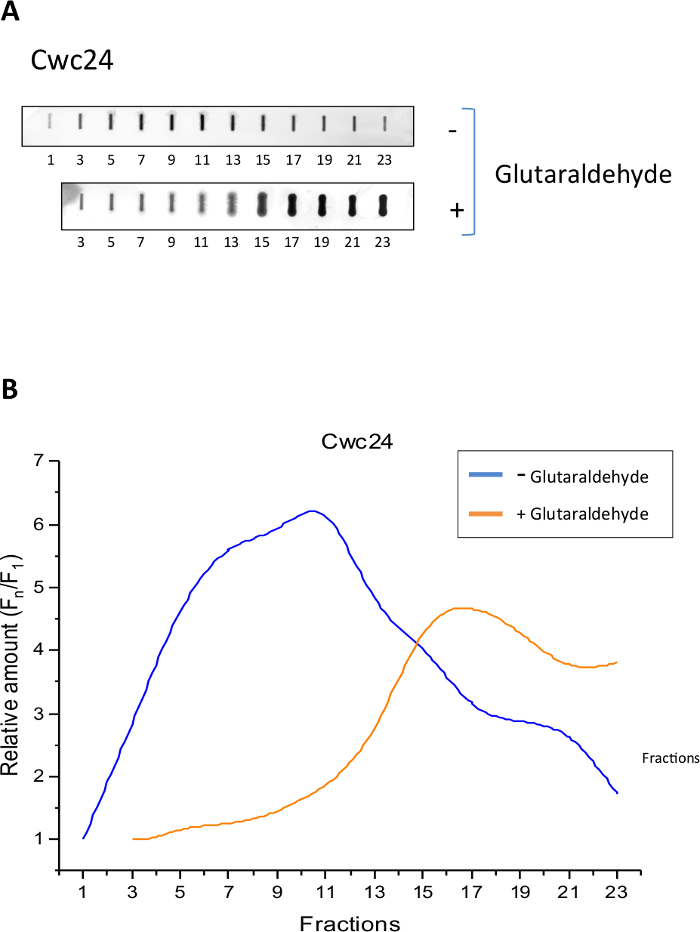 Figure 1: Grafix holds Cwc24 associated to larger complexes. Total yeast extract of cells expressing Cwc24-TAP was separated by centrifugation on glycerol gradients, either in the absence or presence of the crosslinker glutaraldehyde. (A) Odd fractions of the gradient were subjected to slot blot for the immunodetection of Cwc24-TAP with antibody against the CBP portion of the TAP tag. (B) Quantification of Cwc24-TAP using Image J shows the concentration of the protein through the fractions of the glycerol gradient. Presence or absence of glutaraldehyde is indicated. Y axis shows the relative amounts of Cwc24 through the gradient, calculated as the intensity of the signal in the fractions, relative to the first fraction (Fn/F1). Please click here to view a larger version of this figure. 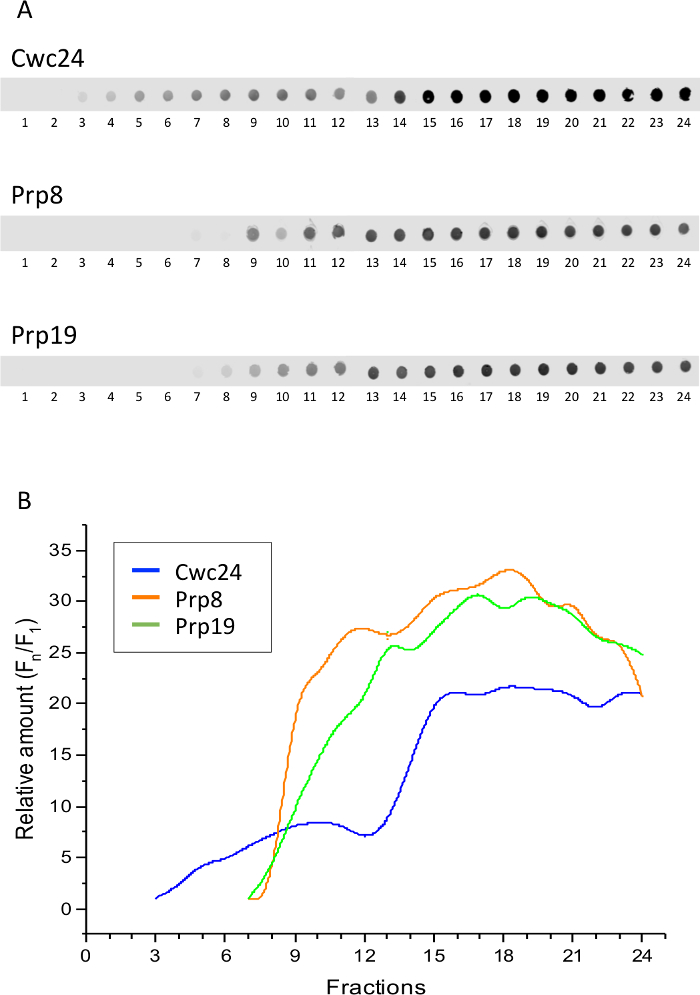 Figure 2: Sedimentation of splicing factors through glycerol/glutaraldehyde gradients. Extracts of yeast cells expressing either Cwc24, Prp8, or Prp19 fused to the TAP tag were loaded on glycerol gradients containing glutaraldehyde and centrifuged for the separation of splicing complexes. (A) Samples of the twenty-four fractions of the gradient were analyzed by dot blot and immunodetection of the TAP-fused proteins with antibody against the CBP portion of the TAP tag. (B) Quantification of the proteins using Image J shows their concentration at the bottom fractions of the glycerol/glutaraldehyde gradient. Y-axis shows the relative amounts of the proteins through the gradient, calculated as the intensity of the signal in the fractions, relative to the first fraction showing a signal above background (Fn/F1). Please click here to view a larger version of this figure. 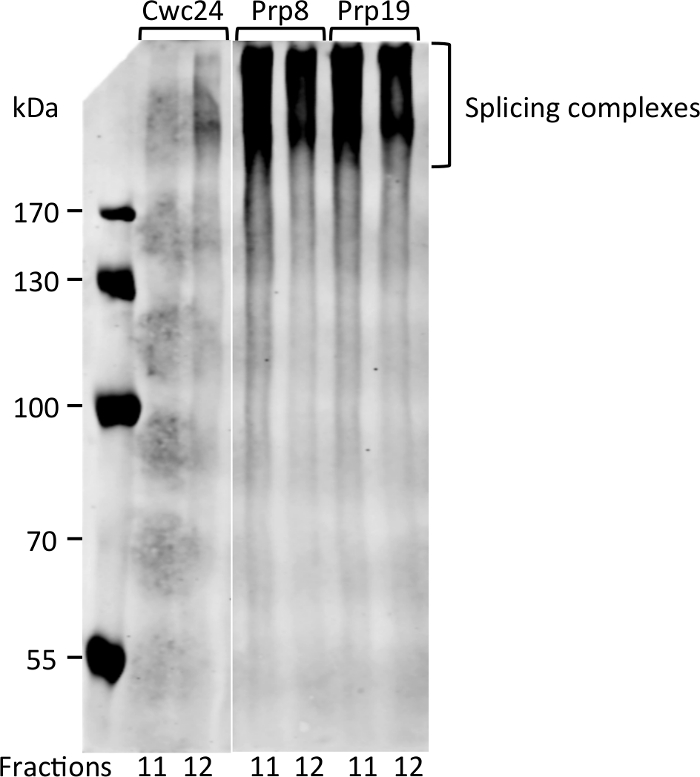 Figure 3: Detection of splicing complexes by native PAGE and immunoblot. Aliquots of fractions 11 and 12 of the gradient shown in Figure 2 were separated by electrophoresis on 8% acrylamide native gel and subjected to immunoblot with antibody against CBP. Proteins are not detected as bands because complexes are too large to separate on native gels. Please click here to view a larger version of this figure.

Protein-protein and ribonucleic acids-protein interactions can be stabilized using crosslinking agents. It is important that the resulting complex is stable to withstand ultracentrifugation on glycerol gradient. Additionally, the buffer conditions should allow the interaction, but be stringent enough to avoid non-specific binding. In the experiments shown here, we used a buffer solution already established for in vitro splicing reactions15.

A major limitation of using glutaraldehyde as a crosslinker is that the crosslink cannot be reverted. Therefore, proteins cannot be analyzed by immunoblot after SDS-PAGE, but only by native gels or dot blot. However, reversible crosslinking agents, such as formaldehyde, could potentially also be used.

We have previously used co-immunoprecipitation of proteins to identify splicing complexes, but in the case of transient or weak interactions7, crosslink may help the isolation of intermediate complexes for later determination of their components by mass spectrometry. Although our focus here was the spliceosome, this method can certainly be used for the isolation of other dynamic processes that include intermediate complexes with varying compositions.

The authors do not have conflicts of interest.