Anesthesia is a routine component of cancer care that is used for diagnostic and therapeutic procedures. The anesthetic technique has recently been implicated in impacting long-term cancer outcomes, possibly through modulation of adrenergic-inflammatory responses that impact cancer cell behavior and immune cell function. Emerging evidence suggests that propofol-based total intravenous anesthesia (TIVA) may be beneficial for long-term cancer outcomes when compared to inhaled volatile anesthesia. However, the available clinical findings are inconsistent. Preclinical studies that identify the underlying mechanisms involved are critically needed to guide the design of clinical studies that will expedite insight. Most preclinical models of anesthesia have been extrapolated from the use of anesthesia in in vivo research and are not optimally designed to study the impact of anesthesia itself as the primary endpoint. This paper describes a method for delivering propofol-TIVA anesthesia in a mouse model of breast cancer resection that replicates key aspects of clinical delivery in cancer patients. The model can be used to study mechanisms of action of anesthesia on cancer outcomes in diverse cancer types and can be extrapolated to other non-cancer areas of preclinical anesthesia research.

More than 60% of patients with cancer receive anesthesia for surgical resection1. Currently, there are no specific clinical guidelines that determine the choice of anesthesia used in cancer patients. Surveys of anesthesiologists indicate a preference for volatile-based anesthesia, including during cancer surgery2,3. However, there is a growing body of evidence that the use of propofol-based total intravenous anesthesia (TIVA) during cancer surgery may associate with improved postoperative outcomes (disease-free survival, overall survival) when compared to volatile anesthesia4. Subsequent clinical studies continue to report contradicting results5,6,7,8. These findings support the need for preclinical studies to better understand the mechanistic effects of different anesthetic agents on cancer-related outcomes.

However, in in vivo studies that model cancer surgery, anesthesia is frequently an incidental part of the procedure. Anesthesia is often not considered in the experimental design, and its impact on cancer-related endpoints may not be evaluated. For example, in vivo studies that require maintenance of anesthesia for cancer surgery most commonly use inhaled volatile anesthesia9. Where propofol has been used in in vivo studies, it has been delivered by single bolus dosing with intraperitoneal delivery, which does not replicate clinical onco-anesthetic protocols10. That approach of propofol administration induces light anesthesia that is suitable for rapid procedures. However, it does not allow maintenance of anesthesia that is required for cancer resection surgery which may be protracted. Furthermore, the absorption kinetics of intraperitoneal delivery is distinct to clinical methods of administration.

A model of propofol-based TIVA for cancer resection surgery was developed to address this need. A protocol for sustained maintenance of anesthesia with titration of the anesthetic agent to allow response to the surgical stimulus was developed to replicate key aspects of anesthetic delivery to patients having cancer surgery. The resulting protocol is used with a mouse model of cancer to provide TIVA during cancer resection surgery. The effect on short-term and long-term cancer-related outcomes is evaluated.

All animal studies were undertaken under the approval of the Institutional Animal Care and Use Committee at Monash University. In this study, female Balb/c mice aged 6-8 weeks were used.

This method describes a model of total intravenous anesthesia (TIVA) with propofol during cancer resection surgery in mice. Propofol is delivered in this mouse model through an intravenous catheter using a syringe pump (Figure 1A,B) to replicate delivery of TIVA in the clinical setting of anesthesia for cancer surgery. Use of the syringe pump minimizes exposure to volatile anesthesia by allowing rapid conversion from initial induction by inhalational anesthesia to intravenous delivery.

After stable anesthesia was achieved by propofol-based TIVA, the primary mammary tumor was resected. In vivo bioluminescence imaging was used to confirm complete resection of the primary tumor (Figure 2). Regular monitoring of mice by non-invasive in vivo bioluminescence imaging identified distant recurrence by luciferase-tagged tumor cells in the lung (Figure 2). This method is also suitable to track local recurrence in the mammary fatpad.

In addition to tracking long-term events such as recurrence, the model may be used to assess events that occur during the perioperative period. These early events may provide mechanistic insight into the effects of anesthesia and other surgical factors on cancer-related outcomes. Twenty-four hours after the cancer surgery under propofol, a multiplex enzyme-linked immunosorbent assay was used to quantify circulating plasma cytokines (Figure 3). Cytokines were evaluated in 7 mice; the appropriate group size will be influenced by the effect size of the endpoint of interest.

Figure 1: Experimental set-up for propofol-based TIVA. (A) A syringe pump is used to ensure the controlled delivery of propofol from a 1 mL insulin syringe. (B) Propofol is delivered into the lateral tail vein by intravenous catheter, connected to a syringe pump, via a 30 G needle. The asterisk shows the needle insertion point. (C) Schematic illustrating the plasma concentration of propofol achieved by sequential administration of a bolus followed by a constant infusion using the syringe pump, compared to delivery by bolus or infusion only. Please click here to view a larger version of this figure. 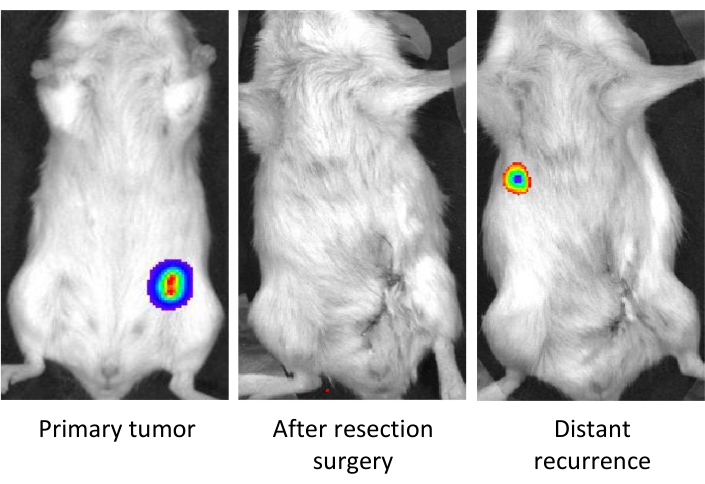 Figure 2: Cancer progression after surgical resection of the primary mammary tumor under propofol-based TIVA. Non-invasive bioluminescence imaging of luciferase-tagged tumor cells was used to track initial growth of the primary tumor growth, successful surgical resection, and subsequent distant recurrence to the lung. Please click here to view a larger version of this figure. 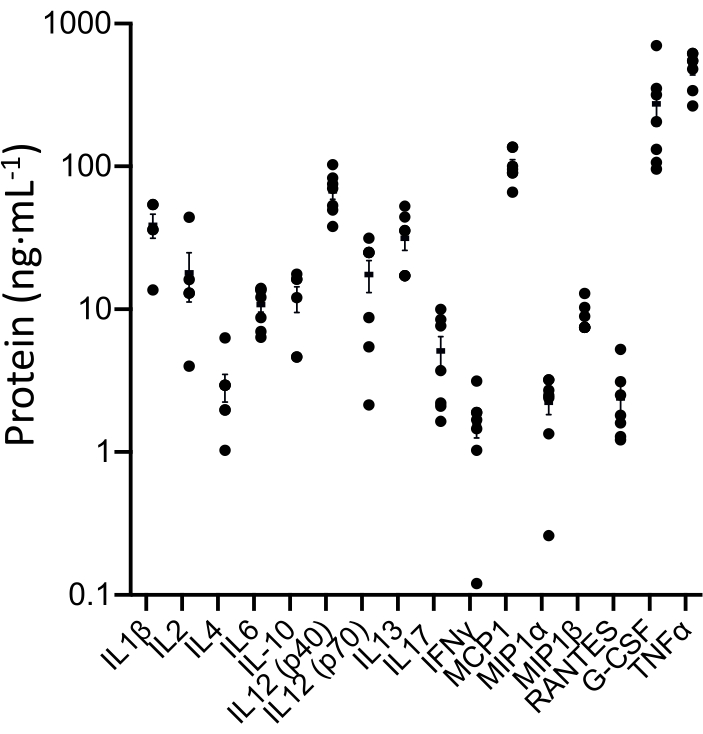 This study reports on a protocol for administering total intravenous anesthesia (TIVA) with propofol in a mouse model of breast cancer that replicates key aspects of clinical practice for TIVA in patients requiring cancer surgery. The protocol allows investigation of both short-term and long-term clinically relevant outcomes after cancer surgery in a mouse model of cancer progression, including measurement of cytokine levels and cancer recurrence (Figure 2, and Figure 3). The methodology will be useful for the evaluation of the effects of TIVA on cancer-related outcomes and its comparison with other anesthetic techniques such as volatile anesthesia.

In contrast to existing protocols that deliver a single intraperitoneal bolus of propofol for sedation during minor interventions such as blood sampling delivery10, this protocol allows prolonged intravenous delivery of propofol for maintenance of anesthesia during major interventions such as surgery. Both the induction and maintenance dose of propofol was carefully titrated to optimize anesthetic depth suitable for major surgical interventions while minimizing mortality from hypotension or cardiac arrest. It was found that hypotension could be avoided by using a strict induction dose of 27 mg/kg administered over 60 s, with concurrent down-titration and cessation of inhaled sevoflurane. Maintenance was achieved using an infusion of propofol at 2.2-4.0 mg/kg/min. During major surgical interventions, such as cancer resection, titration within this range was important to respond to and obtund the magnitude of surgical stimulation. This replicates clinical practice and prevents either over-dosing anesthesia, which can result in hypotension or death, or under-dosing, which can result in emergence from anesthesia, movement, or surgical stress.

An alternative approach to volatile anesthesia induction is to cannulate the lateral tail vein of an awake mouse. While not suitable for all situations, this may provide an alternative to induction by inhalation anesthesia. However, movement of the awake mouse may result in the cannula being dislodged, leading to failure of anesthesia induction. In addition, movement of the needle can result in extravasation of propofol from the vein, which puts the tail at risk of tissue necrosis. This has welfare implications for the mouse, and any associated adrenergic activation as a result of physiological stress may impact the validity of the observed results11.

An additional potential limitation is the use of buprenorphrine as a postoperative analgesic. Opioids may modulate postoperative inflammatory and immune responses12,13. Buprenorphine was chosen for analgesia as its effects on the immune response are less than for other opiates13. Nevertheless, future studies might consider the use of non-opioid analgesic agents.

Despite advances in oncological therapy, local and distant cancer recurrence can occur after surgery and remains a dominant cause of mortality in cancer patients. Many patients will be exposed to anesthesia, often multiple times, during diagnostic and therapeutic operative procedures. A growing body of evidence from in vivo and in vitro studies implicates anesthetic agents in modulating the perioperative response to surgery and impacting diverse aspects of tumor cell biology14. To better understand the impact of anesthetic agents on cancer progression, the model of intravenous propofol anesthesia developed here will be important in future mechanistic preclinical research. This model may be used to interrogate the mechanisms underlying the effects of anesthetic agents on immunomodulation, perioperative inflammatory response, and tumor cell growth and invasion. Furthermore, this model could be extrapolated for use in non-cancer surgery research where anesthetic agents may have effects on other systems, such as cardiac surgery, trauma research, or critical illness (e.g., sepsis) as propofol is a common sedation used in intensive care units.

The authors wish to thank members of the Cancer Neural-Immune Laboratory and Dr. Cameron Nowell at Monash Institute of Pharmaceutical Sciences, Monash University, Parkville. This work was supported by grants from National Health and Medical Research Council 1147498, the National Breast Cancer Foundation IIRS-20-025, the Australian and New Zealand College of Anaesthetists (ANZCA), Perpetual and CTC for Cancer Therapeutics.