The plant cuticle is a waxy outer covering on plants that has a primary role in water conservation but is also an important barrier against the entry of pathogenic microorganisms. In this video, we demonstrate the analysis of plant cuticle mutants identified by forward and reverse genetics approaches.

The plant cuticle is a waxy outer covering on plants that has a primary role in water conservation, but is also an important barrier against the entry of pathogenic microorganisms. The cuticle is made up of a tough crosslinked polymer called "cutin" and a protective wax layer that seals the plant surface. The waxy layer of the cuticle is obvious on many plants, appearing as a shiny film on the ivy leaf or as a dusty outer covering on the surface of a grape or a cabbage leaf thanks to light scattering crystals present in the wax. Because the cuticle is an essential adaptation of plants to a terrestrial environment, understanding the genes involved in plant cuticle formation has applications in both agriculture and forestry. Today, we'll show the analysis of plant cuticle mutants identified by forward and reverse genetics approaches.

Cuticle mutants in the model plant Arabidopsis thaliana are called "eceriferum" mutants, which means "not bearing wax". They can be in visual screens, that is, just by looking at the mutant, you can see that the inflorescence stem of wild-type plants is whitish while the mutants have dark green shiny stems.  One of the mutants that was isolated in this type of visual screen is this one, called eceriferum4 or cer4.

Another way of discovering interesting cuticle mutants is with a reverse genetics approach: choosing candidate genes of interest and then studying plant lines with that gene disrupted. These mutants have TDNA disrupting the gene of interest, in this case, a cytochrome P450 that we now call MAH1.

PCR results (like the one shown in the video) can confirm that the TDNA insertion is in the gene of interest. When two gene-specific primers are used to amplify wild-type DNA, we see a product, but if the TDNA interrupts it, as in this mutant, there is no product there. Conversely, using primers specific for the TDNA and gene, a product is only seen in the mutant. We look for homozygous mutant lines, where both the maternal and paternal copies of the gene are disrupted. If one copy of the gene is disrupted by TDNA and the other copy is still wild-type, the PCR results are mixed.

We analyze the chemical composition of the wax using gas chromatography. First, the soluble wax compounds are removed from the plant surface by dipping it in chloroform.

Then, samples are injected into the gas chromatography column, where they will be heated and sent through on a stream of gas. Different compounds stick more or less to the walls of the column, separating the compounds, and they come out one after the other at the other end of the column. Then, as the compounds pass over the flame ionization detector, we see the peaks. The retention time of each peak is characteristic for different compounds and, from mass spectrometry, we have identified each of the components of Arabidopsis wax. The major peaks present are that of the C29 alkane, the C29 ketone and the C29 secondary alcohol. The minor peaks are the secondary alcohols, fatty acids, aldehydes and esters. The area under the peaks, relative to standard, tells us how much of each compound is present.

When looking at gas chromatograms from these cuticle mutants, one can notice how cer4 lacks the primary alcohols and esters, while mah1 lacks secondary alcohols and ketones. These phenotypes can tell us a lot about the function of the gene of interest in the plant. For example, before we knew which gene was mutated in the cer4 line, the phenotype told us that there was a problem in the primary alcohol branch of the biosynthetic pathway. After the molecular identity of that gene was studied in the Kunst lab, it was discovered that it is part of a gene family of fatty acyl reductases, which fits well with this chemical phenotype.

III. Using Cryo-SEM to Determine the Structure of Cuticle Crystals

When we study the Arabidopsis cuticle mutants, we can see if they have the dark green, glossy phenotype or the wild-type whitish appearance on the stem. We use the scanning electron microscope to look at the cuticle on the surface of the plant and identify the basis of the visual phenotype. We use cryo-SEM, freezing the plants and viewing them at liquid nitrogen temperature in order to keep the cuticle intact because the SEM requires a vacuum to operate and without keeping them frozen, the samples would dry out and collapse.

Here cer4 and mah1 samples, along with the wild-type controls, are dissected and frozen on the SEM stub. When the samples are transferred to the cold-stage of the microscope, you can see that the surface of the wild-type Arabidopsis stem cuticle is covered with crystals. It is the light that is scattering off those crystals that gives the stem its whitish appearance. Here is the cer4 stem; remember it looked glossy? It lacks the crystals on the surface.

People have done experiments where they isolate a pure wax compound from the cuticle of a plant and when they recrystallize it in the lab, the crystals form the same shapes as those found on the plants. In Arabidopsis, we believe that the crystals are made up of a mixture of compounds and the situation is more complicated.  For example, the chemical analysis shows us that in cer4, only the minor component of primary alcohols and their derivative esters are missing, yet the crystals on the cer4 stem are gone. In the case of mah1, the effect of the mutation in that cytochrome P450 enzyme is that the mutant plants lack two major components of the wax, secondary alcohols and ketones, yet the crystals on the mah1 plants form normally. 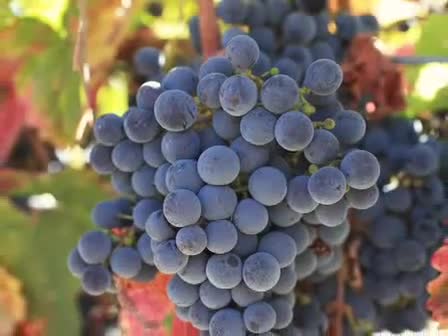