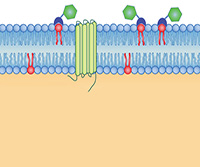 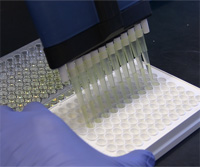 One of the hallmarks of apoptosis is the nuclear DNA fragmentation by nucleases. These enzymes are activated by caspases, the family of proteins that execute the cell death program. TUNEL assay is a method that takes advantage of this feature to detect apoptotic cells. In this assay, an enzyme called terminal deoxynucleotidyl transferase catalyzes the addition of dUTP nucleotides to the free 3’ ends of fragmented DNA. By using dUTPs that are labeled with chemical tags that can produce fluorescence or color, apoptotic cells can be specifically identified.

JoVE’s video on the TUNEL assay begins by discussing how this technique can be used to detect apoptotic cells. We then go through a general protocol for performing TUNEL assays on tissue sections and visualizing the results using fluorescence microscopy. Finally, several applications of the assay to current research will be covered.

The TUNEL assay is most commonly used to detect cells undergoing apoptosis, which is a form of programmed cell death. Apoptosis is an important biological process during development, and for maintaining tissue homeostasis. TUNEL staining allows for visualization and quantification of apoptotic cells. This helps scientists test efficacy of new treatments for disorders in which apoptosis is either inhibited, like in cancer, or enhanced, as in neurodegeneration.

This video will explain how the TUNEL assay can be used to label cells undergoing apoptosis, a step-by-step protocol for performing this method in tissue sections, and how researchers are applying this technique to understand mechanisms of cell death.

Before delving into the protocol of the TUNEL assay, let’s discuss the principles behind this technique.

One of the many hallmark characteristics of apoptosis is DNA fragmentation. How does DNA fragmentation occur? Apoptosis is carried out by enzymes called caspases present in the cytosol. Their primary role is to cleave proteins in order to dismantle the cell. In addition, caspases activate an enzyme called caspase-activated DNase, or CAD, by detaching it from its inhibitor—ICAD. Activated CAD is an endonuclease that travels to the nucleus and cleaves chromosomal DNA.

Cleavage of DNA ultimately causes accumulation of DNA fragments with nicked ends, and the TUNEL assay fluorescently labels these nicked ends of fragmented DNA, allowing scientists to detect apoptosis. But how does this happen? For that you have to understand the TUNEL reaction. TUNEL stands for terminal deoxynucleotidyl transferase-mediated dUTP nick-end labeling. The two main TUNEL reagents are terminal deoxynucleotidyl transferase, or TdT, and deoxyuridine triphosphate, or dUTP, which may be fluorescently labeled for ease of detection.

In order to understand the TUNEL reaction, let’s go back to the apoptotic cells with DNA fragments. These nicked fragments have free 3′ hydroxyl groups. Once you add the TUNEL reagents to a sample containing apoptotic cells, the fluorescently labeled dUTPs attach to these 3′ hydroxyl groups with the help of the catalyst enzyme TdT. The cells stained using this procedure are called TUNEL positive cells, which can then be visualized using fluorescence microscopy.

Now that you understand the basic principles and concepts behind the TUNEL assay, let’s outline a general protocol for performing this technique in tissue sections. The major steps of the TUNEL assay include fixing the tissue of interest, permeabilization of the tissue, adding TUNEL reagents, stopping the TUNEL reaction, and finally the analysis.

First, the tissue of interest must be fixed in order to preserve biological structures. Fixation works by crosslinking proteins within cells. For the TUNEL assay, tissues can be fixed by adding them to a solution containing 4% paraformaldehyde for 4–24 hours at 4°C. After fixation, cryosection the tissue into thin slices of 10 µm or less.

The next step is permeabilization, which allows for reagents such as the TdT enzyme to penetrate the cell nucleus. Permeabilization of tissue sections can be performed by adding the tissue to proteinase K solution for 5–15 minutes at 37°C. Rinse tissue sections with phosphate buffered saline on an orbital shaker for 15–30 minutes at room temperature.

Following incubation, stop buffer is added to the tissue section to cease the TUNEL reaction, and after a short incubation the sections are washed with phosphate buffered saline. Finally, tissue sections stained using fluorescently tagged dUTP are visualized using fluorescence microscopy, and assessed for localization of TUNEL positive cells within a given tissue. One can quantify cell death simply by counting the percentage of TUNEL positive cells in a given tissue section.

Now that you’ve seen how to perform the TUNEL assay to detect apoptotic cells, let’s discuss how this assay can be used to address questions asked by cell biologists.

Cell death occurs as a normal part of development for the sculpting of tissues and structures, and for the elimination of unnecessary cells. Therefore, scientists interested in this phenomenon study the effect of prenatal exposure to different substances on apoptosis during development. Here, scientists were interested in examining the effect of prenatal alcohol exposure on brain development. The results of TUNEL staining performed on fetal brains revealed increased apoptosis in tissues that were prenatally exposed to alcohol, as compared to control animals.

Scientists also use the TUNEL assay to investigate apoptosis in response to bacterial infection. In this experiment, scientists developed a model of pneumonia by injecting mice with Pseudomonas aeruginosa, which induces lung inflammation. Then, lung tissue was removed and TUNEL staining was performed to examine apoptosis in response to the bacterial infection. Results show that apoptotic cell death increased in mice exposed to the bacteria, as compared to control animals.

Lastly, TUNEL staining can be used on human tumor samples, in order to determine tumor responsiveness to drugs. In this example, tumor samples were harvested from human patients and cultured ex vivo. Next, they were treated with pre-clinical drugs and assessed for a response using the TUNEL assay. Data obtained show that treatment with a drug that inhibits heat shock protein 90 significantly increases apoptosis in tumor tissue.

You’ve just watched JoVE’s video on using the TUNEL assay to detect cells undergoing apoptosis. This video reviewed the principles behind TUNEL staining, and a step-by-step protocol to perform the TUNEL assay on tissue sections. We also reviewed how this method could be applied to understand programmed cell death during development and disease. As always, thanks for watching!