In all mammals, the sensory epithelium for audition is located along the spiraling organ of Corti that resides within the conch shaped cochlea of the inner ear (fig 1). Hair cells in the developing cochlea, which are the mechanosensory cells of the auditory system, are aligned in one row of inner hair cells and three (in the base and mid-turns) to four (in the apical turn) rows of outer hair cells that span the length of the organ of Corti. Hair cells transduce sound-induced mechanical vibrations of the basilar membrane into neural impulses that the brain can interpret. Most cases of sensorineural hearing loss are caused by death or dysfunction of cochlear hair cells.

An increasingly essential tool in auditory research is the isolation and in vitro culture of the organ explant 1,2,9. Once isolated, the explants may be utilized in several ways to provide information regarding normative, anomalous, or therapeutic physiology. Gene expression, stereocilia motility, cell and molecular biology, as well as biological approaches for hair cell regeneration are examples of experimental applications of organ of Corti explants.

This protocol describes a method for the isolation and culture of the organ of Corti from neonatal mice. The accompanying video includes stepwise directions for the isolation of the temporal bone from mouse pups, and subsequent isolation of the cochlea, spiral ligament, and organ of Corti. Once isolated, the sensory epithelium can be plated and cultured in vitro in its entirety, or as a further dissected micro-isolate that lacks the spiral limbus and spiral ganglion neurons. Using this method, primary explants can be maintained for 7-10 days. As an example of the utility of this procedure, organ of Corti explants will be electroporated with an exogenous DsRed reporter gene. This method provides an improvement over other published methods because it provides reproducible, unambiguous, and stepwise directions for the isolation, microdissection, and primary culture of the organ of Corti.

Day 2. Isolation of the organ of Corti.

Day 3. Electroporation of the reporter gene into cultured organ of Corti.

We present a method for the isolation of the organ of Corti from a perinatal mouse. The procedure can be used for mice as young as embryonic day 16 up to about postnatal day 6, at which point the bony labyrinth becomes sufficiently calcified to render the dissection cumbersome. Once the organ of Corti is dissected, it may be plated and cultured either in its entirety (fig 3) or as micro-isolated sensory epithelium (fig 4). We have further presented a technique to express exogenous genes in the cultured organ of Corti. The organotypic culture is useful for many other types of study, such as the analysis of organ of Corti gene expression using RT-PCR or in situ hybridization, organ of Corti co-culture with spiral ganglion cells or exogenous stem cells using the micro-isolate3, or in vitro analysis of hair cell death and regeneration. 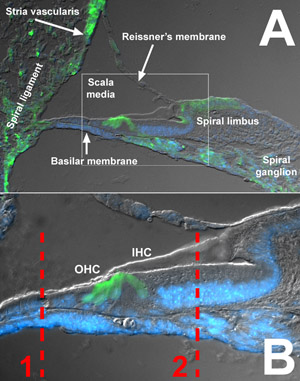 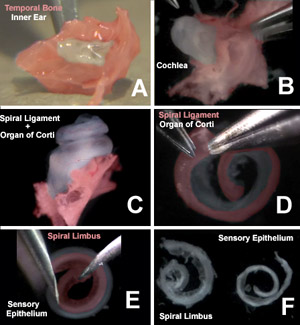 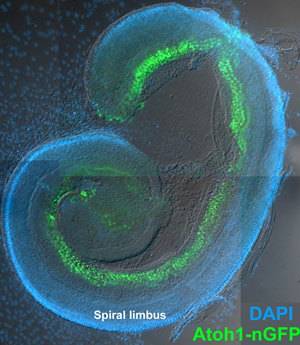 Figure 3. Cultured organ of Corti explant. DIC image showing the organ of Corti of a P4 Atoh1-nGFP mouse that was isolated, plated, and cultured for five days as described. This mouse has been genetically engineered so that cells that express the pro-hair cell gene Atonal homolog 1 (Atoh1 aka Math1) exhibit a green fluorescent protein that is localized to the nucleus8. The organs of Corti from these mice exhibit a nuclear GFP label in all hair cell nuclei and therefore allow for easy visualization of the sensory epithelium using an epifluorescent microscope. The relatively large spiral limbus can be seen lateral to the sensory epithelium. Mesenchymal cells that have originated from the organ of Corti have migrated away from the explant. Blue nuclear label is DAPI. To see a larger version of this image please click here. 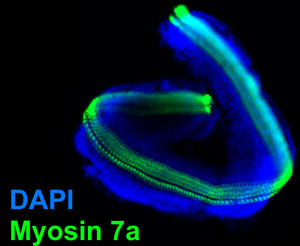 Figure 4. Micro-isolated sensory epithelium. Epifluorescent image obtained from the sensory epithelium that has been isolated from a P4 murine organ of Corti as described and cultured overnight. The micro-isolate was then fixed in 4% paraformaldehyde and processed for immunolabeling of Myosin 7a which labels cochlear hair cells. Note the absence of the comparatively larger spiral limbus from the figure 3. Blue nuclear label is DAPI. To see a larger version of this image please click here. 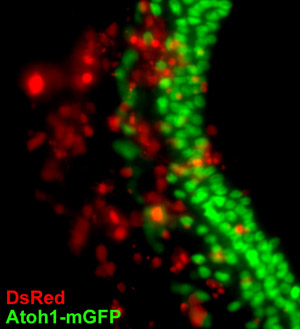 Figure 5. Electroporation of DsRed reporter gene into the cultured organ of Corti. Whole organs of Corti from P4 Atoh1-nGFP mouse pups were isolated, plated, and then electroporated with the DsRed reporter gene as described and then viewed under an epifluorescent microscope. Cells of the organ of Corti explant that expressed the transgenic DsRed reporter protein exhibit a red fluorescence and endogenous cells of the sensory epithelium exhibit a green nuclear fluorescence. Transgenic cells can be seen throughout the spiral limbus and sensory epithelium. To see a larger version of this image please click here.

There are several details that are critical for the success of this procedure. The shorter the time from temporal bone isolation to organ of Corti incubation, the greater the chance that the organs will attach to the coverslip and result in viable organ cultures. Therefore, it is important to limit the amount of time between dissection and placing the organs in the incubator. The choice of antibiotic is also crucial, since many aminoglycoside antibiotics are ototoxic and will result in hair cell death. Although it is preferable to forgo the use of antibiotics altogether, this leaves open the possibility for contamination. Therefore, we suggest the use of 10 μg /mL ampicillin as a general rule to overcome potential contamination problems.

The most troublesome aspect of this, and other procedures for the primary culture of the organ of Corti, is tendency of the organs to float off the plates during incubation. Although floating organ cultures can remain viable for 5-7 days, there are drawbacks of culturing floating organs. For instance, floating organ cultures often fold onto themselves after 4-5 days rendering microscopy problematic. Subsequently, the structural integrity of the organ can become compromised when compared to organs that have been affixed to the coverslip. We have found that the following techniques help to ensure that the organ of Corti does not float in the culture media, but remains affixed to the coverslip. First, coat the glass coverslips in 1:1 polyornithine/laminin supplemented with 20% FBS as described. The overnight incubation called for in this protocol is the minimum time that the plate should be coated. In our laboratory, we often coat all of the plates that we need for one week and keep them at 4 °C until the day prior to use when we move them to the incubator for an overnight incubation. Second, after the organs are transported to the coated coverslips, orient the explant so that the cilia of the hair cells face up. This orientation will facilitate the adherence of the basilar membrane to the culture dish. Third, remove the media within the well to affix the explant to the coated dish. This will ensure contact between the culture dish and the basilar membrane and enhance the ability of the explants to adhere to the glass. This will also assist in maintaining the structural integrity of the rows of hair cells. Lastly, carefully drip 2 drops of culture medium onto the surface of the organ of Corti using a 200 μL capacity pipette and then slowly fill the well by dripping the remaining volume (of the total 130 μL) on the side of the coverslip. It is important to work quickly to assure the attachment of the organ of Corti to the coated coverslip. From the initiation of the dissection to the incubation of the explants, it typically takes 10 minutes for a practiced operator to complete this organ of Corti isolation procedure.

As an example of the utility of this procedure, we also present one example of the use of the organ of Corti cultures; the electroporation of exogenous genes into the explant culture. The electroporation procedure described above is based on previous methods of organ of Corti electroporation. Notably, Zheng and Gao (2000) describe the electroporation of isolated rat organs of Corti where the explants are held in place for electroporation by a molded groove of agarose and then plated on collagen coated 8-well LabTek slide in serum-free medium2. An advantage of their approach is that the organs are oriented so that the top surfaces of the explants face the cathode, which should theoretically result in an even distribution of electroporated cells across the explant. In our hands however, the method that we describe improved on this procedure because the organ of Corti remained affixed to the coverslip throughout the procedure thereby reducing the manipulation of the explant after electroporation. Additionally, a higher percentage of organs of Corti remained attached to the coverslips using this presented method. Our method is taken from Jones, et al. (2006) which uses the addition of the Fugene 6 reagent to increase the efficiency of gene expression after the electroporation. In the Jones et al. (2006) protocol, the organs are electroporated, incubated for 5 minutes with 100 μL of Fugene 6 transfection reagent, and plated 6. Our method differs in the use of a 3:2 ratio of Fugene 6 reagent to plasmid DNA, which we found empirically to provide optimal transgenic expression with minimum organ toxicity. We do not use undiluted Fugene 6 reagent, which can result in toxicity to the cultures. The electrode configuration in our protocol, as well as Jones et al. (2006), results in primary gene expression in either the spiral limbus or sensory epithelium depending upon the position of the cathode. Although there are DsRed positive cells on the side of the culture distant to the cathode, there is a higher concentration of transgenic cells closer to the cathode. To ensure a complete expression of the transgene in both sides of the organ of Corti explant, the current can be reversed for a second pulse train by simply inverting the leads. The presented protocol results in robust expression of the transgene throughout the organ of Corti (fig 5).

The authors would like to thank Demêmes Danielle and Douglas Cotanche and for their efforts in teaching us the methods for the isolation of the organ of Corti. Additionally, we would like to thank Ishmael Stefanov-Wagner for engineering the electroporator electrodes; Sherry Lin for her contributing artwork to the video animation; and Matthew Chana, Jason Meeker, and Kendra Marshall (www.goodfightproductions.com) for producing the video. This work was funded by grants (R03DC010065-Parker; RO1DC007174-Edge; P30DC05209- MEEI Core Support for Hearing Research) from the NIDCD.