The field of human trophoblast research aids in understanding the complex environment established during placentation. Due to the nature of these studies, human in vivo experimentation is impossible. A combination of primary cultures, explant cultures and trophoblast cell lines1 support our understanding of invasion of the uterine wall2 and remodeling of uterine spiral arteries3,4 by extravillous trophoblast cells (EVTs), which is required for successful establishment of pregnancy. Despite the wealth of knowledge gleaned from such models, it is accepted that in vitro cell culture models using EVT-like cell lines display altered cellular properties when compared to their in vivo counterparts5,6. Cells cultured in the rotating cell culture system (RCCS) display morphological, phenotypic, and functional properties of EVT-like cell lines that more closely mimic differentiating in utero EVTs, with increased expression of genes mediating invasion (e.g. matrix metalloproteinases (MMPs)) and trophoblast differentiation7,8,9. The Saint Georges Hospital Placental cell Line-4 (SGHPL-4) (kindly donated by Dr. Guy Whitley and Dr. Judith Cartwright) is an EVT-like cell line that was used for testing in the RCCS.

The design of the RCCS culture vessel is based on the principle that organs and tissues function in a three-dimensional (3-D) environment. Due to the dynamic culture conditions in the vessel, including conditions of physiologically relevant shear, cells grown in three dimensions form aggregates based on natural cellular affinities and differentiate into organotypic tissue-like assemblies10,11,12 . The maintenance of a fluid orbit provides a low-shear, low-turbulence environment similar to conditions found in vivo. Sedimentation of the cultured cells is countered by adjusting the rotation speed of the RCCS to ensure a constant free-fall of cells. Gas exchange occurs through a permeable hydrophobic membrane located on the back of the bioreactor. Like their parental tissue in vivo, RCCS-grown cells are able to respond to chemical and molecular gradients in three dimensions (i.e. at their apical, basal, and lateral surfaces) because they are cultured on the surface of porous microcarrier beads. When grown as two-dimensional monolayers on impermeable surfaces like plastic, cells are deprived of this important communication at their basal surface. Consequently, the spatial constraints imposed by the environment profoundly affect how cells sense and decode signals from the surrounding microenvironment, thus implying an important role for the 3-D milieu13.

We have used the RCCS to engineer biologically meaningful 3-D models of various human epithelial tissues7,14,15,16. Indeed, many previous reports have demonstrated that cells cultured in the RCCS can assume physiologically relevant phenotypes that have not been possible with other models10,17-21. In summary, culture in the RCCS represents an easy, reproducible, high-throughput platform that provides large numbers of differentiated cells that are amenable to a variety of experimental manipulations. In the following protocol, using EVTs as an example, we clearly describe the steps required to three-dimensionally culture adherent cells in the RCCS.

An example of EVT-like cells (SGHPL-4 trophoblast cell line) grown in the RCCS on Cytodex-3 beads is shown in Figure 2. The EVT-like cell line displays projections extending away from the main cluster and attaching to neighboring clusters. Many of the beads are completely covered with propagating cells. Once removed from the RCCS and plated on an extracellular matrix, the EVT-like 3-D grown cells aggressively invade and/or migrate (Figure 3). RT-PCR data confirms the increased expression of MMPs seen in 3-D aggregates as opposed to traditional cell culture monolayers (Figure 4). Interestingly, genes not associated with invasion are also upregulated in the RCCS (Table 1) and may aid in delineating such areas as immune interactions with invading trophoblasts cells. 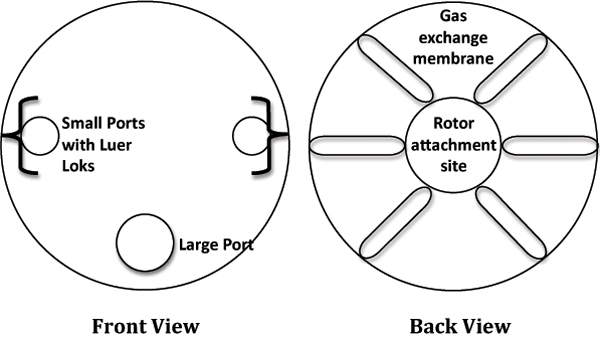 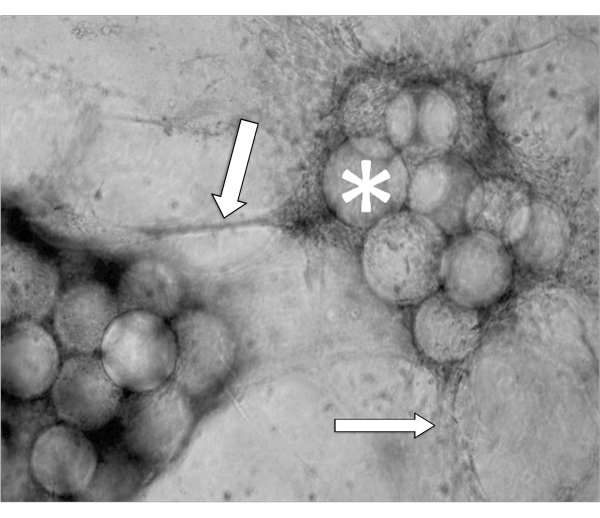 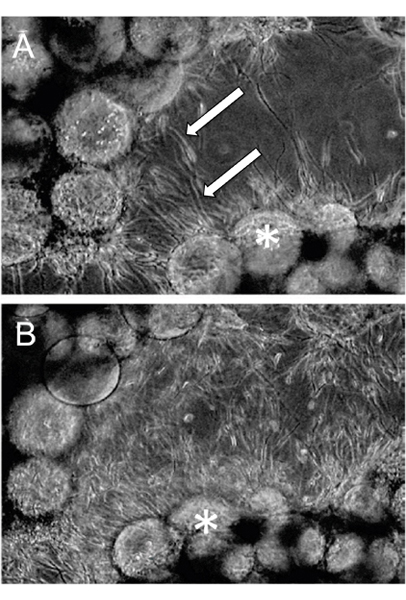 Figure 3. RCCS Grown aggregates were embedded in fibrin gels. Invasion through the fibrin gel was observed as early as (A) 24 hours post-fibrin embedding and (B) continued through 48 hours. Arrows indicate invading cells and * denotes the Cytodex-3 microcarrier beads (Adapted, with permission, from Ref. 7). 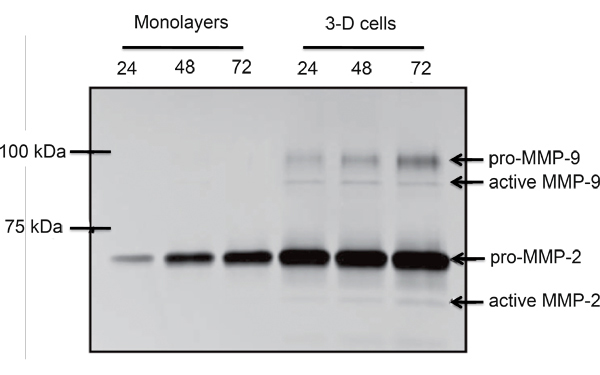 Figure 4. Comparative gelatin zymogram of monolayer and RCCS propagated SGHPL-4 EVT-like cells. Pro- and active forms of MMP-2 and MMP-9 were secreted by the RCCS grown trophoblast cells (Adapted, with permission, from Ref. 7). 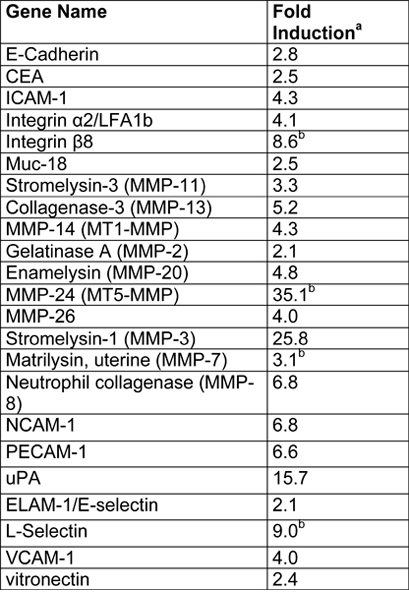 Table 1. Summary of microarray results from SGHPL-4 cells grown in a RCCS (Adapted, with permission, from Ref. 7).

The culture technique presented here provides investigators with highly invasive EVT-like cells. It has now been recognized that a loss of differentiation occurs in monolayers due to inhibition of cellular responses to chemical and molecular cues in three dimensions (apical, basal, and lateral cell surfaces)10,13. This technique reflects characteristics noted in utero on invading EVT cells. As the procedure mimics conventional monolayer tissue culture time kinetics, but provides cells with differential expression, comparative assays may be employed. Cell clusters may be harvested for use in experiments at any time. They may be used as clusters or collagen degradation may be employed to isolate cells as single cell suspension. The Cytodex-3 microcarrier beads may be substituted with scaffolds or microcarrier beads coated with other extracellular matrices (ECMs) that may be more conducive to individual laboratories' specific interests. Alternatively, there are many other 3-D culture platforms that may be more conducive to specific cell type culture conditions, like cell culture inserts and spinner flasks10,23. It should be noted that culture kinetics could be different under these circumstances and should be established individually. Culture kinetics may be easily tested for by removing samples from the RCCS at regular intervals and analyzing for expression of distinctive differentiation markers, proliferation, and viability15. Optimal proliferation and differentiation kinetics may be ascertained by comparing results over time and against conventional monolayer tissue culture techniques. Using the SGHPL-4 cells as an example, aggregates were removed daily and stained with Ki67 (to determine proliferation) and caspase-3 (to determine apoptosis), Markers specific to the individual laboratories' interests may be readily exchanged. The technique described herein can be applied to the study of spiral artery remodeling, shallow implantation, and maternal immune responses to invading trophoblasts cells.

As has been published previously, this 3-D cell culture model can also be used for a variety of other cell lines17,14-21. In every case, the utility of the model has to be tested by a variety of known differentiation markers. Like any in vitro cell culture model, 3-D cell cultures are inherently reductionistic. No single culture model will provide all of the mechanistic details, but when combined with published results from other models, 3-D cultures become an additional valuable alternative model for improving our understanding of disease-related mechanisms, which may hold enormous potential for the development of novel products and procedures in the diagnosis, prevention, and treatment of infectious diseases.

This work was supported by the US National Institutes of Health grant NIH/NICHD #HD051998 (to C.A.M.).