A method to analyze the solvent accessibility of the thiol group of cysteine residues of Maize rayado fino virus (MRFV)-virus-like particles (VLPs) followed by a peptide cross-linking reaction is described. The method takes advantage of the availability of several chemical groups on the surface of the VLPs that can be targets for specific reactions.

Mimicking and exploiting virus properties and physicochemical and physical characteristics holds promise to provide solutions to some of the world's most pressing challenges. The sheer range and types of viruses coupled with their intriguing properties potentially give endless opportunities for applications in virus-based technologies. Viruses have the ability to self- assemble into particles with discrete shape and size, specificity of symmetry, polyvalence, and stable properties under a wide range of temperature and pH conditions. Not surprisingly, with such a remarkable range of properties, viruses are proposed for use in biomaterials 9, vaccines 14, 15, electronic materials, chemical tools, and molecular electronic containers4, 5, 10, 11, 16, 18, 12.

In order to utilize viruses in nanotechnology, they must be modified from their natural forms to impart new functions. This challenging process can be performed through several mechanisms including genetic modification of the viral genome and chemically attaching foreign or desired molecules to the virus particle reactive groups 8. The ability to modify a virus primarily depends upon the physiochemical and physical properties of the virus. In addition, the genetic or physiochemical modifications need to be performed without adversely affecting the virus native structure and virus function. Maize rayado fino virus (MRFV) coat proteins self-assemble in Escherichia coli producing stable and empty VLPs that are stabilized by protein-protein interactions and that can be used in virus-based technologies applications 8. VLPs produced in tobacco plants were examined as a scaffold on which a variety of peptides can be covalently displayed 13. Here, we describe the steps to 1) determine which of the solvent-accessible cysteines in a virus capsid are available for modification, and 2) bioconjugate peptides to the modified capsids. By using native or mutationally-inserted amino acid residues and standard coupling technologies, a wide variety of materials have been displayed on the surface of plant viruses such as, Brome mosaic virus 3, Carnation mottle virus 12, Cowpea chlorotic mottle virus 6, Tobacco mosaic virus 17, Turnip yellow mosaic virus 1, and MRFV 13.

Transient expression of mutant MRFV coat protein (CP) genes in N. benthamiana plants in a PVX-based vector producing VLPs is described in Figure 1. The modified MRFV coat protein gene is amplified by PCR and then placed under the transcriptional control of the duplicated subgenomic CP promoter in a PVX-based vector, pP2C2S 2, (a gift of D. Baulcombe, Sainsbury Laboratories, Norwich, England). In vitro RNA transcription produces RNA transcripts that are then used to inoculate N. benthamiana plants. In the infected plants (Figure 2A) MRFV-CP subunits form VLPs (Figure 2B) which are easily purified. Subsequently, the VLPs are cross-linked to peptides.

An example of reactive amino acids of the MRFV coat protein is shown in Figure 3. Each amino acid selected can be used to attach moieties if it is surface exposed. The chemical techniques include traditional bioconjugation strategies such as, the acylation of the amino group of lysine, alkylation of the sulfhydrilic group of cysteine, and activation of carboxylic acid residues and coupling with added amines. In addition, the aromatic groups of tyrosine and tryptophan can be attractive targets for bioconjugation through diazotization and alkylation.

The solvent accessibility of Cys residues of VLPs to thiol-specific reagents is illustrated in Figure 4. Purified wt-VLPs (lane 4) and Cys-VLPs mutants carrying cysteine residues in position 107-111 (lane 1) and 192-194 (lane 3) of the CP gene 12 are unreactive in native conditions with thiol-specific reagent (absence of fluorescence). Fluorescein-5-maleimide imparts orange fluorescence only for the Cys-VLPs mutant carrying cysteine residues in position 125-129 of the CP gene (lane 2). The result shows that VLPs in lane 2 have a geometric arrangement of cysteines residues resulting in solvent-exposed free thiol groups, whereas the cysteine residues in the samples in lanes 1 and 3 are perhaps involved in disulphide bridges in the folding of the coat protein.

Labeling reactions with maleimide-PEG2-biotin followed by a biotinylation assay represent another example of analysis of solvent accessibility of Cys residues. Because biotin is a relatively small molecule, it can be conjugated in several copies on the VLPs, each of which can bind one molecule of avidin as shown in Figure 5. The level of biotinylation, 84.74 mole of biotin per mole of protein 13, indicates the number of the biotin molecules attached to the VLPs and consequently the number of ligands that can be displayed on the exterior surface. Because of the availability of several thiol groups on the VLPs, peptides can be attached by cross-linking reactions with NHS-PEG4-maleimide. This reagent is a hetero-bifunctional cross-linker which contains reactive ends such as N-hydroxysuccinimide (NHS) ester and maleimide groups, allowing covalent conjugation of amine- and sulfhydryl-containing molecules. As shown in Figure 6A, the NHS ester reacts with primary amines forming amide bonds, whereas maleimide reacts with sulfhydryl groups forming stable thioether bonds. Cross-linking reactions produce VLPs-peptide complexes that are immunoreactive with the specific antibodies in Western blot as shown in Figure 6B. 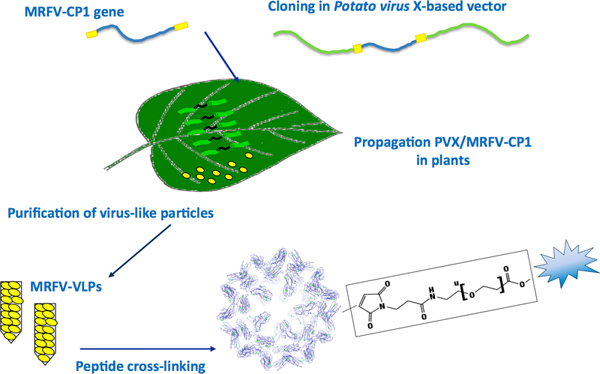 Figure 1. Schematic diagram of the production of VLPs in plants, followed by VLPs purification and subsequent cross-linking of peptides. Click here to view larger figure.

Figure 2. Symptoms produced by T7 transcripts inoculation on N. benthamiana plants (A) and transmission electron microscopy of the produced VLPs (B). 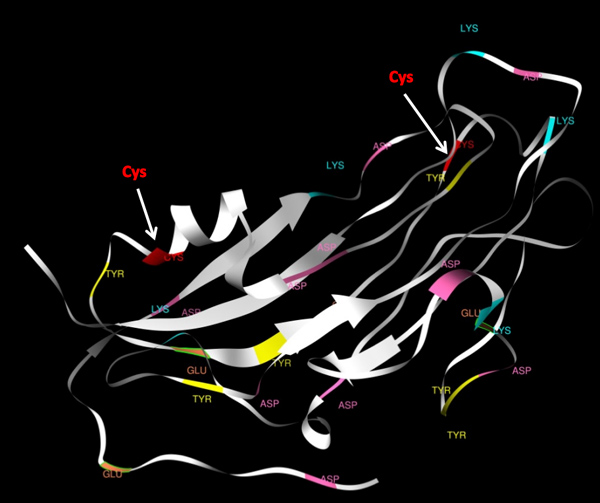 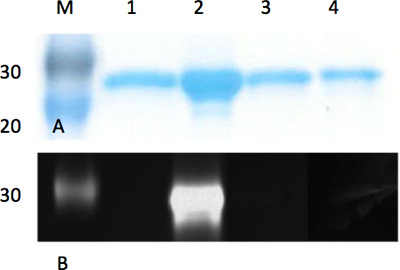 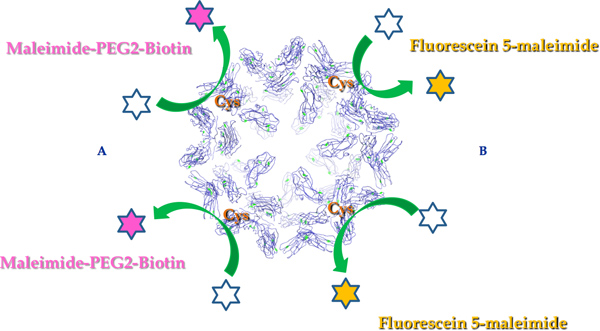 Figure 5. A T=3 ribbon model of isometric VLPs showing the sulfhydryl reactive chemistry for (A) biotin labeling and (B) fluorescein-5-maleimide labeling. 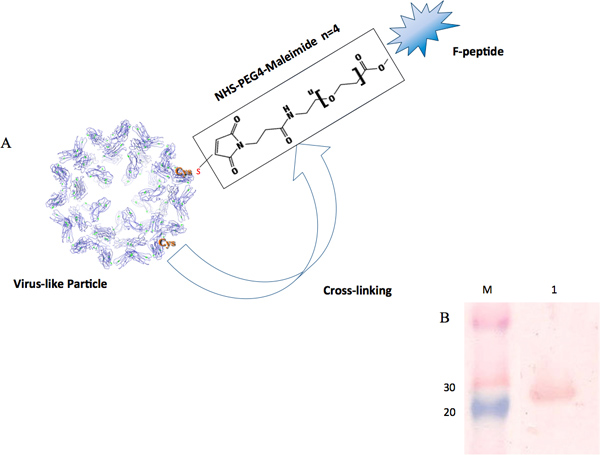 The method presented here enables a very sensitive and rapid analysis of reactive cysteines present on the surface of plant-produced VLPs as well as on other protein complexes. Maleimides are thiol-specific reagents, which react with free sulfhydryl-containing molecules to form stable thioether bonds. This method draws on the specificity of the maleimides to react with sulfhydryl groups not involved in interactions with other amino acids. Preserving the native structure of the VLPs is very important through the entire process. In the application described, the reactions are performed in native conditions and at pH 7 to maintain the native structure of the VLPs. At neutral pH, maleimides have optimal reactivity with free sulfhydryl groups. This allows labeling of the VLPs with either fluorescein or biotin to cysteine accessible to modifications.

An array of factors including space arm, cleavability, chemical composition, dimension, and solubility ultimately determine the selection of cross-linkers used. In addition, the choice of the cross-linker used is also a function of the size of the two proteins (in this case VLPs and peptide) involved in the conjugation. Hetero-bifunctional cross-linkers are ideal for protein-peptide or protein-protein cross-linking. They allow more controlled two-step reactions that minimize the undesired self-conjugation and polymerization which occurs when homo-bifunctional NHS-ester reagents are used. In the first step, the NHS ester reacts with primary amines forming amino bonds. In the second step, the maleimide reacts with sulfhydryl groups forming thioester bonds.

Mention of the trade names of commercial products in the publication is solely for the purpose of providing specific information and does not imply recommendation or endorsement by the U.S. Department of Agriculture.