Skip to content
Trial ends in Request Full Access Tell Your Colleague About Jove
This is a sample clip. If you're new to JoVE sign up and start your free trial today to watch the full video! If your institution has an existing subscription, log in or sign up to access this video.
Chemistry
Author Produced
CITE THIS  SHARE

Herein is described the synthesis, isolation, and reactions of hypervalent iodonium alkynyl triflates (HIATs) with azides to generate cyanocarbenes. The procedures will involve air-sensitive and cryogen techniques, including cold filtration under an inert atmosphere. Handling and safety of the synthesized compounds will also be discussed.

The evidence for cyanocarbene generation is shown by visible extrusion of dinitrogen as well as the characterization of products that occur from O-H insertion, sulfoxide complexation, and cyclopropanation. A side reaction of the cyanocarbene formation is the generation of a vinylidene-carbene and the conditions to control this process are discussed. There is also potential to form a hypervalent iodonium alkenyl triflate and the means of isolation and control of its generation are provided. The O-H insertion reaction involves using a HIAT, sodium azide or tetrabutylammonium azide, and methanol as solvent/substrate. The sulfoxide complexation reaction uses a HIAT, sodium azide or tetrabutylammonium azide, and dimethyl sulfoxide as solvent. The cyclopropanations can be performed with or without the use of solvent. The azide source must be tetrabutylammonium azide and the substrate shown is styrene.

The continued evolution of organic chemistry hinges on the design and development of new reactions. In particular, the discovery of new reactions that enable previously unimaginable synthetic routes bear ultimate significance. Towards this end, our group desired to convert two carbons of an alkyne and a nitrogen of an azide into a cyanocarbene.1 This previously unknown transformation would allow for a significant increase in molecular complexity since the reactive cyanocarbene would rapidly react further. The initial effort was to use a nucleophilic alkyne and electrophilic azide, but triazoles were efficiently formed in this case as opposed to cyanocarbenes.2 Using an umpolung approach, the second method uses an electrophilic alkyne and nucleophilic azide and products resulting from cyanocarbene reactions are fortunately formed in this case.3 There are many sources of nucleophilic azide, however, electrophilic alkynes are much less common. The group of Klaus Banert previously reported the proof-of-concept for this reaction using an alkynyl-chloride,4 but our group and the Banert group independently and contemporaneously determined that hypervalent iodonium alkynyl triflates (HIATs) are much better electrophiles for the reasons of stability and reactivity.3,6 We herein describe the synthesis, isolation, and reaction of these HIATs with azides to form and react in situ as cyanocarbenes.

Several safety precautions should be considered before proceeding with these experiments. Some hypervalent iodonium alkynyl triflates are unstable and will decompose, sometime violently, when exposed to air and light.7 To form the cyanocarbene intermediate, the procedure requires the use of azide sources. Azides are explosive and highly toxic.8 Proper personal protection equipment should be worn when handling these materials, especially organotin, and all manipulation of the reagents should take place in properly ventilated hoods. The cyanocarbene is a powerful and unstable reactive intermediate. Take care to perform experiments initially on small scales so that nitrogen gas evolution is controllable and never perform these reactions in closed systems. If scale-up of the reaction is desired, we strongly suggest the use of a safety shield.

The synthesis of many HIATs have been previously published including the use of Zefirov's reagent9,10, and Koser's reagent,9,11 however, this video will be using the cyanophenyliodonium triflate reagent9,12 (Figure 1). Cyanophenyliodonium triflate was synthesized based on a previously reported literature preparation displayed.13 The reagent reacts with trialkyl-tin modified alkynes14 to form the desired product. After the HIAT is synthesized and isolated it can be reacted with azide to form a reactive cyanocarbene intermediate (Figure 2). There are several other methods that can be used to synthesize the iodonium alkynes such as using alkynyl silanes15 and alkynyl boronic esters16 but the method in the video was chosen because, in our experience, it had better efficiency and yield.

Our proposed mechanism3,5 (Figure 3) for this reaction involves the addition of an azide source to the β-carbon of the alkyne, thereby forming an iodo-ylide which decomposes to iodobenzene and a vinylidene-carbene. The vinylidene-carbene can then undergo a 1,2-rearrangement via migration of either the R-group or azide to afford an alkynyl-azide. The alkynyl-azide then extrudes dinitrogen to form a cyanocarbene which can react with a substrate. It should be noted that there can be formation of a hypervalent iodonium alkenyl triflate species, depending on conditions. The by-product is favored at lower temperatures in protic solvents where the protonation of the iodo-ylide is faster than the rearrangement to the alkynyl azide. Another possible product that occurs during O-H insertion reactions is a vinyl ether where the vinylidene-carbene is trapped before the rearrangement to the alkynyl-azide can occur. The propensity to form this vinyl ether is determined by the R group.

One of the main advantages of this reaction is that after the carbene reacts, the resultant nitrile group is a convenient handle for further functionalization. Many synthons can be envisioned with this method and different products can be formed with the same substrates. Controlling the product mixture with temperature, concentration, and the R group of the alkyne is necessary.3 With proper insight upon how cyanocarbenes behave, the method shows a viable means to quickly adding chemical complexity to form a targeted molecule. Examples of how the cyanocarbene reacts include O-H insertion where the nucleophilic oxygen atom of the alcohol attacks the carbene and then proton transfer occurs, dimethyl sulfoxide complexation, where the carbene combines with the sulfur atom, and cyclopropanation where the carbene reacts with an alkene.

Figure 1 illustrates the synthesis of a HIAT by using cyanophenyliodonium alkynyl triflate. The HIAT can then be used to generate cyanocarbenes which will undergo O-H insertion of cyclopropanation. The O-H insertion reaction with Phenyl HIAT produces 2-methoxy-2-phenylacetonitrile in up to a 75% yield. The cyclopropanation reaction with Phenyl HIAT produces 1,2-diphenylcyclopropanecarbonitrile in up to a 61% yield. Although not demonstrated in the video, dimethyl sulfoxide complexation can occur with the cyanocarbene intermediate when reacting with dimethyl sulfoxide to produce the DMSO-adduct in 27% yield. 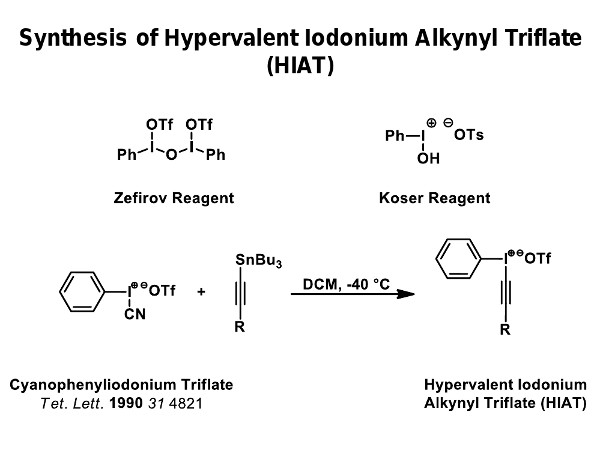 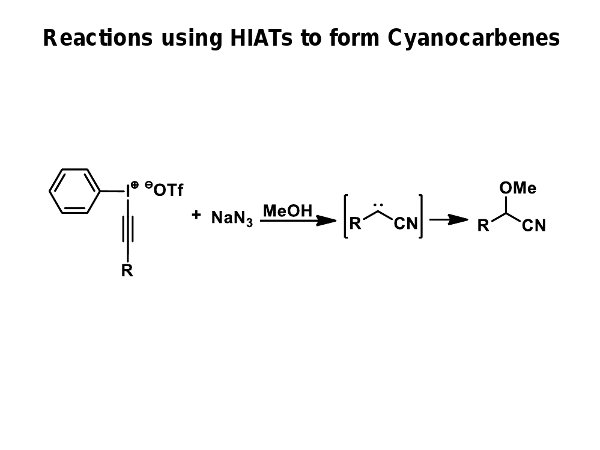 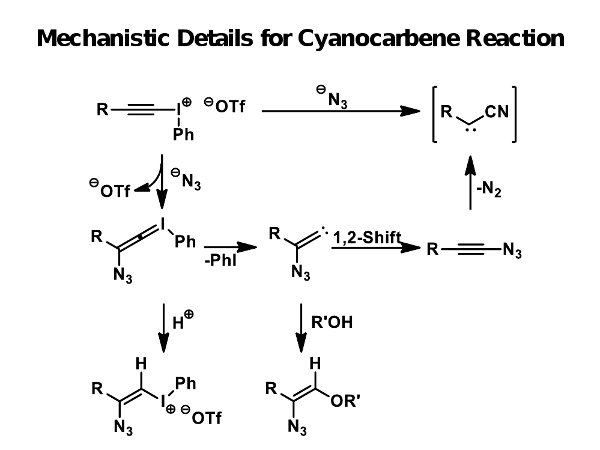 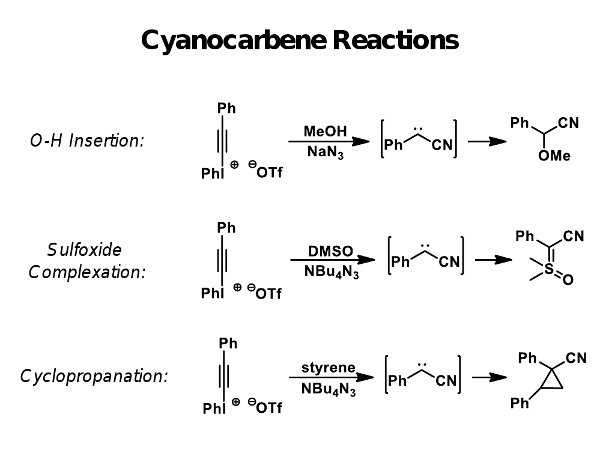 Hypervalent iodonium alkynyl triflates, or HIATs, are formed and can be reacted with azide sources to form cyanocarbenes. It is very important that all necessary precautions are taken since many of the reagents and intermediates shown in this video are potentially explosive and highly toxic. Although the high level of reactivity can be dangerous if ill-prepared, it is shown in this video that the inherent reactivity of the compounds can be harnessed by capturing the cyanocarbenes in various reactions such as O-H insertion and cyclopropanation.

The synthesis of other HIATs has been attempted with varying success. The difficulty often comes in the isolation of the solid from the byproducts or that the HIAT degrades rapidly and cannot be used in subsequent reactions. Crystallization of the HIAT can be performed in solvents such as diethyl ether, hexane, chloroform and acetonitrile to obtain analytically pure materials.17

Future applications of this method can be extended to other novel cyclopropanations, C-H insertions and, in unique instances, intramolecular reactions. The cyanocarbene acts more electrophilically than typical carbenes but for most purposes the reactivity with normal carbenes should be congruent.

One of the most important aspects of this reaction is that it converts a relatively inert alkyne to a more reactive HIAT and then to an extremely unstable cyanocarbene. It is also worth noting that over the course of the reaction the alkyne and azide are transformed into a cyanocarbene and nitrogen gas. This new reaction thus enables previously unimagined synthetic pathways to construct molecules of significance.

Funding for this project from the American Chemical Society Petroleum Research Fund (52488-DNI1) and the University of North Carolina at Greensboro is gratefully acknowledged. We also thank Dr. Terry Nile (UNCG) for loaning us the appropriate glassware for these experiments. Video consulting and editing by Aaron Glancy is also acknowledged.