Angiogenesis is a vital process for normal tissue development and wound healing, but is also associated with a variety of pathological conditions. Using this protocol, angiogenesis may be measured in vitro in a fast, quantifiable manner. Primary or immortalized endothelial cells are mixed with conditioned media and plated on basement membrane matrix. The endothelial cells form capillary like structures in response to angiogenic signals found in conditioned media. The tube formation occurs quickly with endothelial cells beginning to align themselves within 1 hr and lumen-containing tubules beginning to appear within 2 hr. Tubes can be visualized using a phase contrast inverted microscope, or the cells can be treated with calcein AM prior to the assay and tubes visualized through fluorescence or confocal microscopy. The number of branch sites/nodes, loops/meshes, or number or length of tubes formed can be easily quantified as a measure of in vitro angiogenesis. In summary, this assay can be used to identify genes and pathways that are involved in the promotion or inhibition of angiogenesis in a rapid, reproducible, and quantitative manner.

Angiogenesis, the development of new blood vessels from preexisting vessels, is vital for a variety of processes including organ growth, embryonic development, and wound healing1-3. Newly developed blood vessels, lined by endothelial cells, supply oxygen and nutrients to tissues, promote immune surveillance by hematopoietic cells and remove waste products2,4. Angiogenesis is of key importance during embryonic and fetal development. However, this process remains dormant in the adult except during times of wound healing, skeletal growth, pregnancy or during the menstrual cycle1-3.

Angiogenesis is associated with various pathological conditions including cancer, psoriasis, diabetic retinopathy, arthritis, asthma, autoimmune disorders, infectious diseases, and atherosclerosis8-10. Due to the importance of angiogenesis in various diseases, understanding the genes and pathways that regulate this process is critical to the design of better therapeutics.

The tube formation assay is a rapid and quantitative method for determining genes or pathways involved in angiogenesis. First described in 1988, the principles underlying this assay are that endothelial cells retain the ability to divide and migrate rapidly in response to angiogenic signals11-13. Further, endothelial cells are induced to differentiate and form tube-like structures when cultured on a matrix of basement membrane extract (BME). These tubes contain a lumen surrounded by endothelial cells linked together through junctional complexes. Tube formation occurs quickly with most tubes forming in this assay within 2-6 hr depending on quantity and type of angiogenic stimuli.

1. Collection of Conditioned Media to Test for Angiogenic Potential

2. Preparation of Endothelial Cells Prior to Assay

3. Preparation of Reagents Prior to Assay

NOTE: BME concentrations are highly variable dependent on lot. BME does not work well if the concentration is less than 10 mg/ml, therefore the BME manufacturer should be contacted prior to purchase to ensure acquisition of an adequately concentrated lot.

4. Preparation of Endothelial Cells Immediately Prior to Assay

Mouse 3B-11 endothelial cells were seeded on solidified reduced growth factor BME – in this assay, the product Matrigel was used - and followed over time. As shown in Figure 1, angiogenic factors secreted by either mouse keratinocytes or fibroblasts are capable of inducing tube formation over time. Endothelial cells migrate and begin to form small branches within 1-2 hr of plating. Maximum tube formation was reached by 4-6 hr using conditioned media previously obtained from keratinocytes. By 24 hr, some branches remained, but many of the cells became apoptotic and tubes began to disconnect.

Cell number has a profound impact on tube formation (Figure 2). When an insufficient number of cells are seeded on the matrix, few tubes form and the network is minimal. As more cells are seeded, the tube network becomes more extensive. However, at too high of a concentration, the cells begin to clump or form monolayers, and differences between treatment groups become masked.

Tube formation with 3B-11 cells works the best with cells between the second and sixth passages. After the sixth passage, cells do not form as extensive a network; cells will not form any major network after the tenth passage. Cells should have a minimum of two passages after reviving from liquid nitrogen storage to ensure adequate tube formation (Figure 3). The growth rate of 3B-11 is so rapid that 25% of cells passaged one day will yield a confluent flask the following day.

Images can be easily documented through phase contrast microscopy using objectives between 4X and 20X. However, if fluorescent images are desired, calcein AM may be added and the tube network visualized through fluorescence or confocal microscopy (Figure 4). There are several different ways to detect and quantify tube network formation. The most common methods of analysis involve quantification of number of tubes, nodes, loops/meshes, or length of tubes. These parameters can be counted by hand or can be done through various imaging programs, including NIH ImageJ with the Angiogenesis Analyzer plugin. Examples of each of these types of analysis are shown in Figure 4. 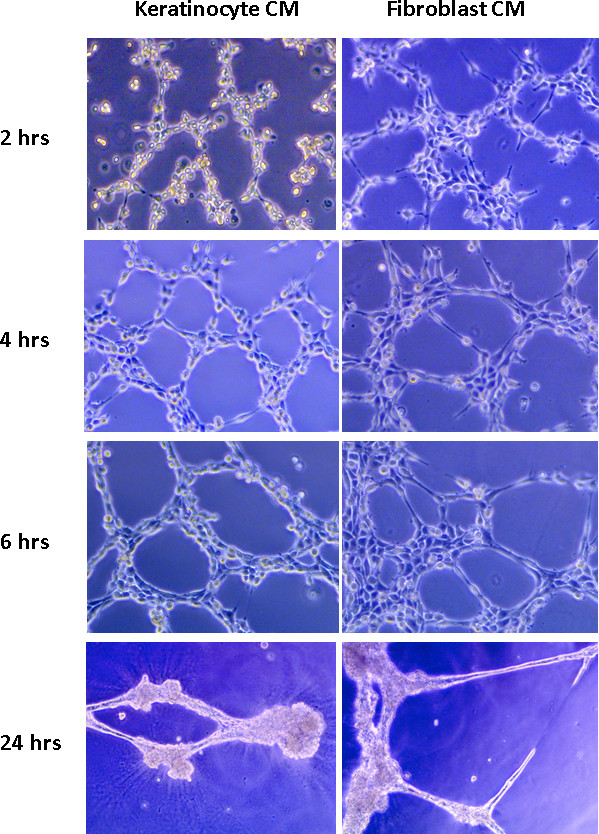 Figure 1. Mouse 3B-11 endothelial cell tube formation over time. A total of 1 x 105 cells were seeded per well on reduced growth factor BME with 350 µl of conditioned media from either fibroblasts or keratinocytes. Tube formation was recorded over the course of 24 hr. 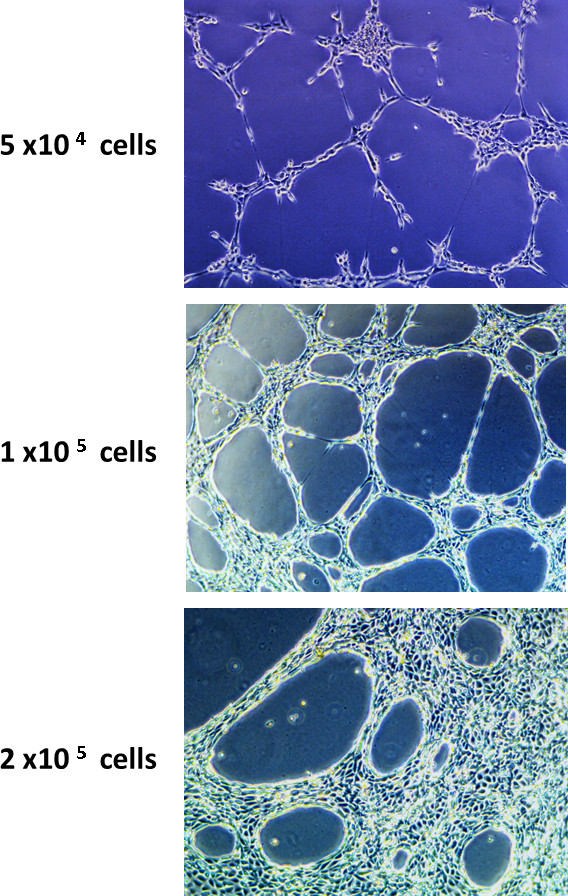 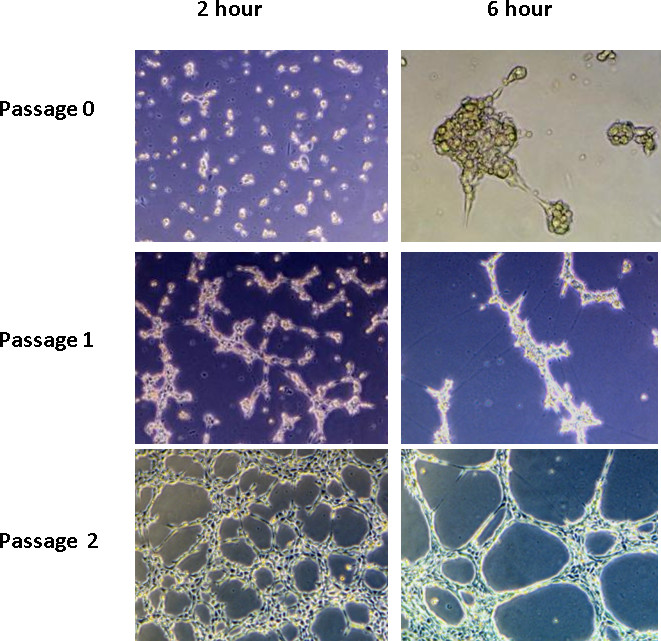 Figure 3. The effect of passage number on endothelial cell tube formation. A total of 1 x 105 cells were seeded per well on reduced growth factor BME at passage 0, 1, or 2. Little tube formation was seen before passage 2. 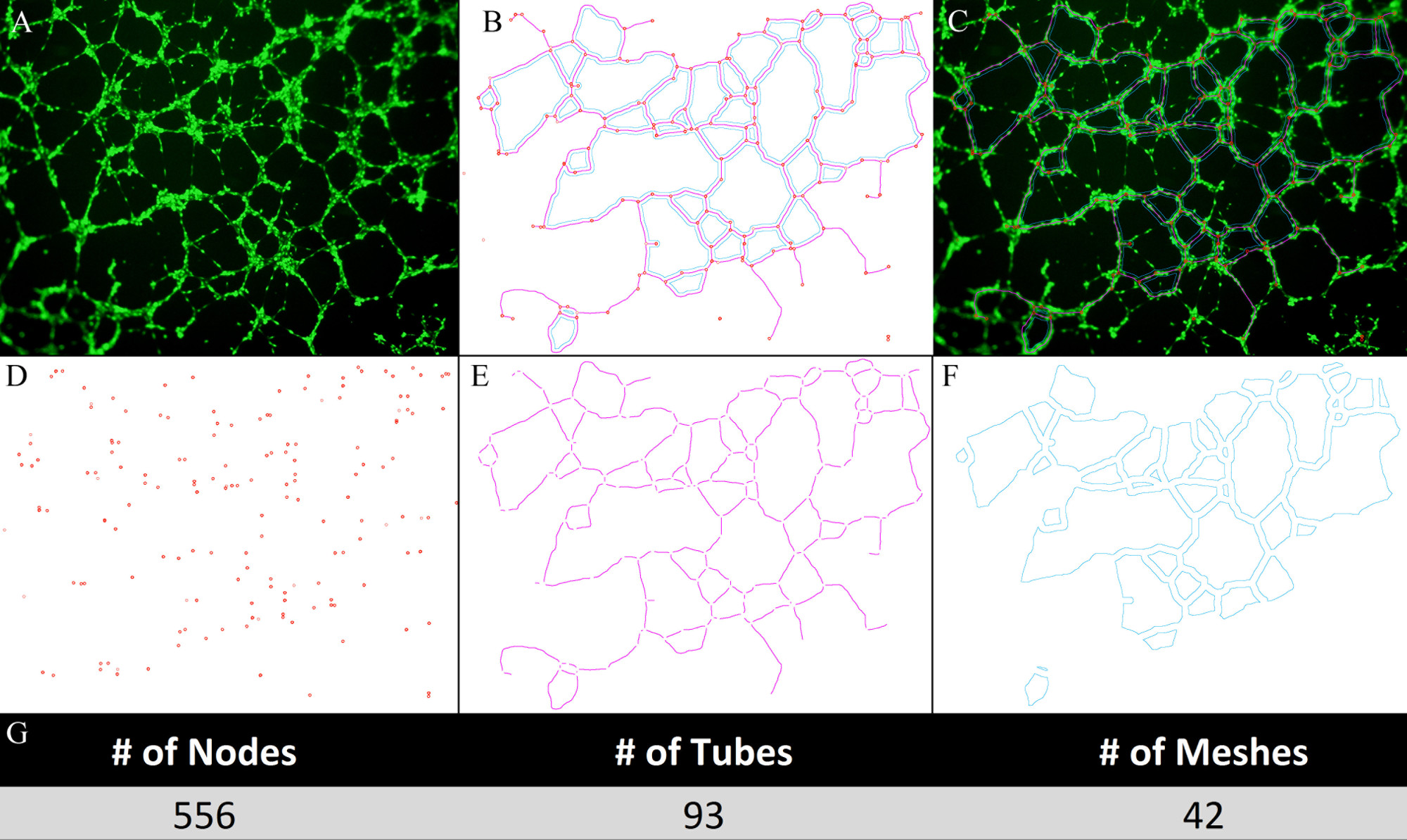 Figure 4. Fluorescence microscopy imaging and quantification of tube formation. Prior to the start of the assay, the endothelial cells can be treated with calcein AM in order to visualize the cells using fluorescence or confocal microscopy. There have been several reported methods for quantifying the formed tube network, including counting the number of tubes, loops/meshes, branch sites/nodes, or the length of tubes. Here, we show how NIH Image J with the Angiogenesis plugin software can be used on a calcein AM stained tube network (A) to detect total nodes (red)/tubes (pink)/mesh (blue) in combination (B) and merged on network (C). Additionally, this program can be used to individually detect nodes (D), tubes (E), or mesh (F) which can then be quantified (G).

Angiogenesis is involved in both physiological and pathological processes. Studying mechanisms involved in angiogenesis requires the use of assays that recapitulate the major steps in angiogenesis. The endothelial cell tube formation assay offers several advantages over other assays. It is easy to set-up, is relatively inexpensive, produces tubules within hours, and is quantifiable. Further, it can be completed in 24- or 96-well plates, and thus can be used for high throughput screening to identify factors that stimulate or inhibit angiogenesis. Although we used 3B-11 mouse endothelial cells for our experiments, the assay can be performed with a variety of human or murine endothelial lines, including HUVEC and SVEC.

To perform an endothelial cell tube formation assay, endothelial cells are mixed with conditioned media which contains pro or antiangiogenic factors and plated over reduced growth factor basement membrane matrix. Endothelial cells begin to align themselves within 1 hr and lumen-containing tubules start to appear within 2 hr. Tube formation can be visualized using a phase contrast inverted microscope, or calcein AM can be added at the conclusion of the assay and tubes visualized using fluorescence or confocal microscopy.

Results may be optimized in several ways. First, primary cells should be ideally between the second and sixth passages. Using cells prior to the second or after the tenth passage is not be conducive for maximum tube formation. Second, the cell number needs to be optimized based on cell type and line used. For mouse 3B-11, we found maximal response using 75,000-100,000 cells/well in a 24-well plate grown with mouse keratinocyte and fibroblast conditioned media. Using too few cells results in minimal or no tube formation, and too many cells results in formation of a monolayer or clumping. Finally, the quantity of conditioned media used should be normalized to cell number instead of protein concentration. If using normal media with 10% FBS, the FBS will account for the majority of the protein concentration measured through a standard protein assay. The concentration will look nearly identical even though number of cells, and therefore the concentrations of the proteins secreted during conditioning, between treatments may be highly variable.

In summary, the tube formation assay is a fast, reproducible and sensitive method for in vitro measurement of angiogenesis. It has advantages over other assays and is a useful method to determine genes and pathways that potentially play an important role in the activation or inhibition of angiogenesis.

This research was supported in part by the Intramural Research Program of the National Cancer Institute at the National Institutes of Health, and by NCI grant UA5CA152907.