Adipocytes exist in discrete depots and have diverse roles within their unique microenvironments. As regional differences in adipocyte character and function are uncovered, standardized identification and isolation of depots is crucial for advancement of the field. Herein, we present a detailed protocol for the excision of various mouse adipose depots.

Adipose tissues are complex organs with a wide array of functions, including storage and mobilization of energy in response to local and global needs, uncoupling of metabolism to generate heat, and secretion of adipokines to regulate whole-body homeostasis and immune responses. Emerging research is identifying important regional differences in the developmental, molecular, and functional profiles of adipocytes located in discrete depots throughout the body. Different properties of the depots are medically relevant since metabolic diseases often demonstrate depot-specific effects. This protocol will provide investigators with a detailed anatomic atlas and dissection guide for the reproducible and accurate identification and excision of diverse mouse adipose tissues. Standardized dissection of discrete adipose depots will allow detailed comparisons of their molecular and metabolic characteristics and contributions to local and systemic pathologic states under various nutritional and environmental conditions.

Adipose tissues play critical roles in whole-body homeostasis, including storage and release of energy in response to local and global needs, thermoregulation, and secretion of adipokines to regulate energy balance, metabolism and immune responses1,2. Adipocytes are distributed throughout the body in discrete depots, and in some cases serve specialized roles within their microenvironments3,4,5. Historically, the study of adipose tissue has centered on white adipose tissue (WAT), and its role in maintaining energy homeostasis. Most adipocytes are distributed throughout the body in subcutaneous and visceral WAT depots. The characteristics of these depots are important for differential susceptibility to metabolic diseases. Subcutaneous adipocytes, located beneath the skin, have been associated with protective metabolic effects5. Visceral adipocytes, which surround the vital organs and are contained within the gonadal, perirenal, retroperitoneal, omental and pericardial depots, are commonly linked to metabolic disorders, including type 2 diabetes and cardiovascular disease2. Brown adipose tissues (BAT) have also been studied extensively. Brown and brown-like adipocytes express uncoupling protein 1 (UCP1) and play important roles in adaptive thermogenesis and glucose homeostasis6,7. Classical brown adipocytes are contained in the interscapular BAT depot8. Clusters of brown adipocytes are also found in other locations, including supraclavicular, infra/subscapular, cervical, paravertebral and periaortic depots8,9.

In addition to their location in major WAT and BAT depots, adipocytes exist in discrete niches throughout the body4, where they may perform specialized functions within their respective microenvironments. For example, bone marrow adipose tissue (BMAT) serves as a lipid reservoir, is a major source of circulating adiponectin, and closely interacts with osteoblasts, osteoclasts, and hematopoietic cells10,11. Dermal adipocytes contribute to widespread processes, including wound healing, immune response, thermoregulation, and hair follicle growth12,13. Further, epicardial adipocytes may produce several adipokines and chemokines that exert local and systemic effects on the development and progression of coronary artery disease14. Expansion of inter/intramuscular WAT has been positively correlated with increased adiposity, systemic insulin resistance, and decreased muscular strength and mobility15. In addition, popliteal adipocytes serve as a lipid reservoir for lymphatic expansion during infection16. While the specific roles of different articular depots are generally unknown, the Hoffa depot (infrapatellar) within the knee is now thought to contribute to pathologies, including anterior knee pain and osteoarthritis17.

Whereas regional differences in adipocyte character and function are under intense study, the field is currently limited by the lack of a standardized protocol for the identification and dissection of diverse mouse depots. Previously published methods have typically described the isolation of one or two specific depots and lack the level of detail required for uniform excision18,19. The protocol described in this manuscript provides a comprehensive guide for the specific anatomic locations and isolation steps of many different mouse adipose depots. Although WAT depots are the primary focus of this manuscript, the excision of interscapular BAT is also described in detail. Adipose tissues excised using this protocol can be used for a wide variety of experimental endpoints, including explant studies, histology, and gene expression analyses.

The goal of this manuscript is to provide investigators with a detailed protocol to clearly and precisely identify and isolate both prominent and less-studied mouse adipose depots (Figure 1). This resource will facilitate a more complete investigation of the developmental, molecular, and functional characteristics of adipocytes within diverse niches. 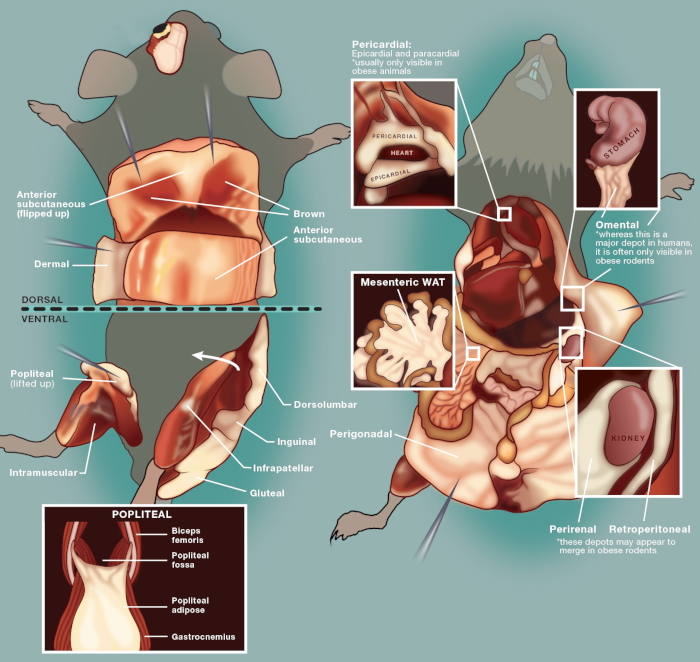 Figure 1: Schematic depiction of mouse adipose depots dissected in this protocol. This image has been adapted from Bagchi et al., 20184. Please click here to view a larger version of this figure.

All animal procedures are performed with the approval of the Institutional Animal Care and Use Committee (IACUC) of the University of Michigan.

NOTE: For the purpose of this video protocol, 4 to 6 month-old C57BL/6J mice are used.

4. Identification and Isolation of Other Adipose Depots

Successful identification and isolation of various mouse adipose depots can be achieved using the protocol described above. The gross anatomical locations of subcutaneous (A, E-F), brown (B), visceral (C, D, G-J), and popliteal (K) depots are shown in Figure 2. 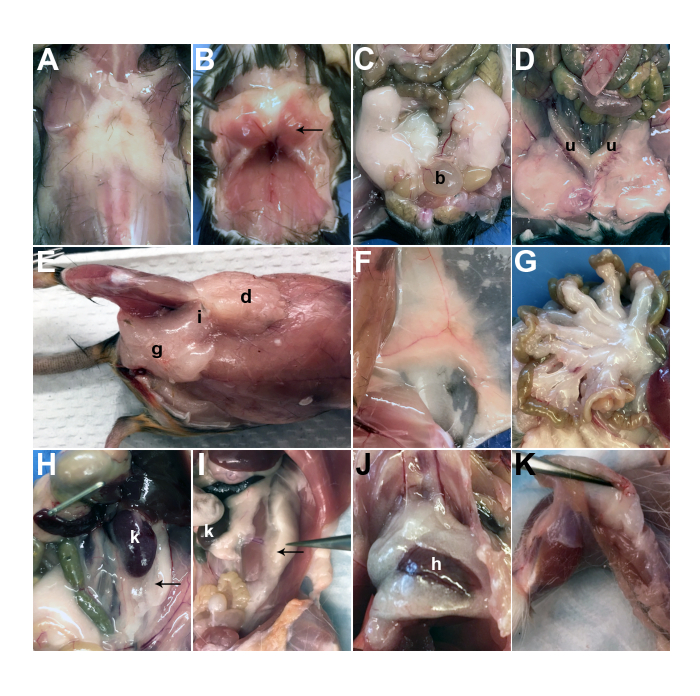 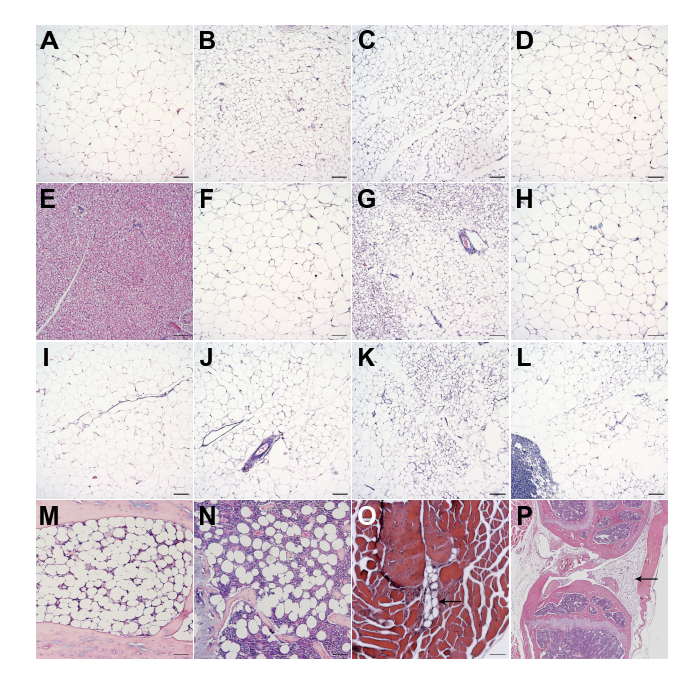 As the importance of the diverse molecular and functional characteristics of discrete adipocyte clusters is increasingly recognized, it is crucial that investigators within the field uniformly identify and excise adipose depots for further analyses. To date, few protocols exist for standardized localization and isolation of the wide range of mouse adipose depots. Previously published methods are focused primarily on one or two depots and lack the details necessary for uniform identification and excision by different investigators18,19. This manuscript is a novel and important contribution to the field of adipose biology since it provides an in-depth guide to the anatomic location and precise dissection of commonly studied and lesser known depots throughout the mouse. Gross anatomical location and histological analyses are provided to demonstrate the diversity of adipocyte niches.

Successful isolation of discrete adipose depots using this protocol is dependent on several critical steps. Maintenance of a clean dissection environment is crucial; 70% ethanol can be used as necessary to remove contaminating hairs or blood from the dissection tray and tools. When isolating posterior subcutaneous WAT, it is imperative that the initial incision in the skin does not penetrate the closely associated peritoneal cavity so that the two layers can be efficiently separated to expose the WAT. Similarly, when cutting through the peritoneal wall to expose the abdominal cavity contents, incisions must not perforate the underlying intestines to prevent contamination with digestive elements. Interscapular BAT must be carefully excised from the surrounding tissue to prevent WAT contamination, which will skew future analyses. Consistent identification of the posterior subcutaneous dorsolumbar, inguinal, and gluteal depots depends on the utilization of precise anatomic landmarks described in the protocol. The distinction between these depots is particularly important; although the depots can appear to be continuous, centrally located inguinal adipocytes acquire brown-like characteristics more readily than their surrounding counterparts.

The adipose tissues isolated using this protocol can be analyzed using a variety of techniques. In addition to histological evaluation (e.g. H&E staining, immunohistochemistry), adipose tissues can be used for a wide array of molecular analyses, from regulation of transcription through to posttranslational protein modifications. Adipocytes and stromal vascular cells within individual depots can be isolated by collagenase digestion and differential centrifugation. These fractions can then be used for molecular, metabolic, and cell culture studies. Depot explants can also be used for ex vivo metabolic and enzymatic assays.

Several challenges and limitations arise during the isolation and excision of mouse adipose tissues. First, some depots that are physiologically important in humans are not commonly present in lean, adult mice. For example, omental WAT, which is the major visceral depot in humans, can only be seen in genetically or diet-induced obese mice. The expansion of some depots can, however, be induced by nutritional challenges or drug treatments. For example, high fat diet feeding can cause the expansion of omental and pericardial WAT. Intermuscular WAT can be induced by skeletal muscle injury25,26 or high fat diet27. Regulated BMAT expands in response to various challenges, including high fat diet, calorie restriction and thiazolidinedione treatment11,28. Second, due to the small size of mice, obtaining enough sample for molecular or metabolic analyses can be difficult. For example, isolation of enough pure bone marrow adipocytes for subsequent analyses is challenging, even after pooling bones from multiple mice. Third, accurately defining borders of certain depots can be difficult. For example, posterior subcutaneous WAT appears to be one continuous depot but is actually comprised of discrete dorsolumbar, inguinal, and gluteal depots. Additionally, the perirenal can appear to be fused to both the gonadal and retroperitoneal depots in very obese animals. The lack of distinct borders between adjacent depots can make clean isolation of these tissues challenging. However, this dissection protocol provides investigators with a detailed atlas and step-by-step guidance for accurate and reproducible dissection of a wide range of mouse adipose depots. Field-wide standardization of the identification and isolation of discrete mouse adipose depots described above will undoubtedly help further elucidate differences in the development, gene expression, and local and systemic functions of previously under-studied adipocyte niches.