Here, we describe the ex vivo expansion of hematopoietic stem cells from CD34+ cells derived from umbilical cord blood treated with a combination of a cytokine cocktail and VPA. This method leads to a significant degree of ex vivo expansion of primitive HSCs for either clinical or laboratory applications.

Umbilical cord blood (UCB) units provide an alternative source of human hematopoietic stem cells (HSCs) for patients who require allogeneic bone marrow transplantation. While UCB has several unique advantages, the limited numbers of HSCs within each UCB unit limits their use in regenerative medicine and HSC transplantation in adults. Efficient expansion of functional human HSCs can be achieved by ex vivo culturing of CD34+ cells isolated from UCBs and treated with a deacetylase inhibitor, valproic acid (VPA). The protocol detailed here describes the culture conditions and methodology to rapidly isolate CD34+ cells and expand to a high degree a pool of primitive HSCs. The expanded HSCs are capable of establishing both short-term and long-term engraftment and are able to give rise to all types of differentiated hematopoietic cells. This method also holds potential for clinical application in autologous HSC gene therapy and provides an attractive approach to overcome the loss of functional HSCs associated with gene editing.

Ex vivo expansion of hematopoietic stem cells (HSCs) from umbilical cord blood (UCB) units holds great promise for HSC applications in regenerative medicine and transplantation therapy. Transplantation with UCB units has several unique advantages such as easy collection, high availability, minimal risk of infection, low risk of disease relapse, and low frequency of graft-versus host disease (GVHD). However, the major disadvantages of their use in clinical settings are the limited number of HSCs present within each UCB unit1. The insufficient number of HSCs results in delayed engraftment and hematopoietic recovery, risk of graft rejection, and aberrant immune reconstitution.

Serum-free cultures of CD34+ cells isolated from UCBs and treated with valproic acid (VPA) result in the expansion of large numbers of primitive HSCs4,9,10. The HSC expansion is not solely due to the proliferation of the existing HSCs derived from UCBs. Instead, this expansion is due to the acquisition of a primitive phenotype combined with a limited number of cell divisions and proliferation9. Within the initial 24–48 h of incubation with a combination of cytokines and VPA, CD34+ cells acquire a transcriptomic and phenotypic profile that characterize long-term HSCs. The significant increase in the percentage of HSCs is accompanied by a prompt increase in the number of HSCs (63 fold increase within 24 h of VPA treatment)9. Notably, the VPA-ex vivo expansion strategy expands HSCs with low metabolic activity, which further highlights their primitive characteristics.

The method described here provides conditions and treatments that lead to a significant degree of ex vivo expansion of primitive HSCs for either clinical or laboratory applications. This ex vivo expansion strategy uses a cytokine cocktail combined with VPA treatment. VPA is an FDA approved drug for treatment of bipolar disorders and other neurological diseases. The HSC expansion with VPA is prompt and occurs within 7 days, minimizing both the time of manipulation and the risk of contamination. Importantly, this protocol allows for the acquisition of long-term HSC phenotypic markers such as CD90 and CD49f within 24-48 h following treatment with VPA9. Expanded HSC grafts created with this protocol have the capacity to regenerate the hematopoietic system since they can differentiate into all hematopoietic cell lineages and establish long-term engraftment following transplantation into myeloablated NSG mice models4. Moreover, this protocol is highly reproducible and allows for efficient and rapid isolation of viable CD34+ cells from UCBs, which is critical for industrialization of this procedure.

The VPA ex vivo expansion protocol also has the potential to overcome the significant loss of HSCs which occurs during gene editing11. Gene editing requires exposure to cytokines, which are necessary for cycling cells and activation of DNA-repair mechanisms. Due to the prompt effects of VPA treatment, this method might be beneficial for the generation of a higher number of genetically modified cells within a period of time that is relevant for currently utilized gene modification protocols.

The HSC ex vivo expansion protocol follows the guidelines of the Research Ethics Committee at Mount Sinai School of Medicine.

3. Isolation of CD34+ Cells from UCBs

Figure 1: Schematic presentation of ex vivo expansion culture. Purified CD34+ cells from UCBs are primed for 16 h in ex vivo culture supplemented with a combination of the indicated cytokines. Cultures are treated with VPA (1mM) for an additional 7 days. The ex vivo expanded cells may then be transplanted into myoablated NSG mice. Please click here to view a larger version of this figure. 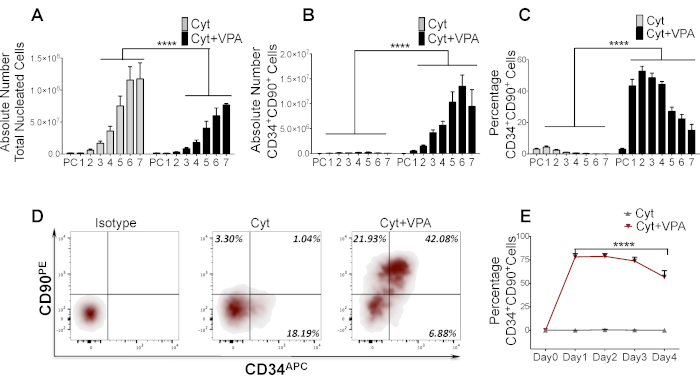 Herein, we present a protocol to rapidly expand to a significant degree the number of functional human HSCs from UCBs. The pilot and kinetic studies using this protocol indicate that the ex vivo expanded cells promptly acquire and retain the expression of several HSC phenotypic markers including CD90 as well as primitive HSC metabolic characteristics9.

This ex vivo expansion protocol is relatively simple and reliable. Purification of CD34+ cells with the cell separator device (see Table of Materials) is highly reproducible and rapid, allowing for fast recovery of isolated cells. This method results in a high yield of purified CD34+ cells (>90%) as opposed to manual immunomagnetic separation. Moreover, this ex vivo expansion protocol does not require special and complex devices or fed-batch culture systems that need continuous supplies of large volumes of fresh media supplemented with cytokines3,13. Accordingly, this method limits costs. Importantly, this protocol allows for the expansion of the HSC pool within a short time, which is a key limiting factor for contamination frequency.

Several points should be considered for achieving primitive HSCs from CD34+ cells using this protocol. CD34+ cells expanded for 4 days in cultures treated with the cytokine cocktail and VPA lead to the generation of a pool of primitive long-term HSCs. These HSCs are characterized not only by the high expression levels of CD34, CD90 and CD49f, but also by a very primitive metabolic profile, which predominantly relies on glycolysis9. During more prolonged incubation with VPA for 7 days, expanded cultures however are more heterogeneous and contain a greater number of both long-term and short-term as well as differentiated cells as opposed to cells expanded for 4 days. This outcome is mainly due to the exhaustion of VPA in culture and increased number of cell divisions9. Thus, this protocol can be used to achieve expansion of two different pools of cells: 4-day and 7-day expanded cells. The 7-day expansion product can be used for allogeneic HSC transplantation where more rapid as well as sustained multilineage engraftment is required. The 4-day expansion protocol might be best suited for genetic modification strategies that target long-term repopulation cells. It is also likely that this combination of VPA and cytokine cocktail can expand the pool of HSCs from CD34+ cells at the same degree or higher when using media other than the media (see Table of Materials) used in this protocol.

Current gene editing procedures are associated with a significant loss of HSCs, which limit their clinical application. The great number of primitive HSCs achieved within 2–4 days of VPA treatment in ex vivo cultures has the potential to overcome this loss in HSC numbers. Thus, this protocol might be beneficial for improving the existing gene editing protocols and enable correction of genetic mutations in HSC transplantation-based therapies for β-thalassemia and sickle cell disease. Moreover, it can be applied to maintain great numbers of HSCs during gene manipulations for studies focused on the elucidation of gene functions in HSCs and in hematopoiesis.

In conclusion, the method described here can be used for ex vivo expansion of both human and murine HSCs and can be tailored to specific clinical applications as well as to a wide spectrum of investigations in basic research.

This work was supported by NYSTEM grant C030136 to R.H. We would like to thank Bartek Jablonski for his feedback and revision of the manuscript