This is a sample clip. Sign in or start your free trial.
JoVE Journal
Cancer Research

Recent genomic and transcriptomic profiling of CRPC revealed there are three general mechanisms of resistance in prostate cancer: 1) activating mutations resulting in the restoration of androgen receptor (AR) signaling1; 2) activation of bypass signaling, as exemplified in a pre-clinical model for next-generation anti-androgen therapy resistance in which activation of the glucocorticoid receptor (GR) can compensate for loss of AR signaling2; and 3) the recently identified process of lineage plasticity, in which tumor cells acquire resistance by switching lineages from a cell type dependent on the drug target to another cell type that is not dependent on this (which, in PCa, is represented as AR-negative and/or neuroendocrine disease [NEPC])3,4. However, the molecular mechanisms that cause drug resistance are not understood. Moreover, acquired anti-androgen resistance may lead to therapeutic vulnerabilities that can be exploited. Therefore, it is essential to evaluate drug responses in model systems that mimic patient phenotypes and genotypes.

All work described in this protocol has been performed with previously established murine organoids and patient-derived organoids. All animal work was performed in compliance with the guidelines of Research Animal Resource Center of Memorial Sloan Kettering Cancer Center (IACUC: 06-07-012). All patient-derived tissues were collected in compliance with rules and regulations of Memorial Sloan Kettering Cancer Center (IRB: 12001).

NOTE: To determine the percentage of cells that can generate an organoid, a seeding assay can be performed as a proxy for the stem/progenitor potential. The organoid formation capacity is also important for defining a cell seeding number for the viability assays.

NOTE: Commercially available column-based methods yield good quantity and quality of RNA. To ensure good quantity RNA, use a minimum of one dome per sample; however, using three domes is recommended, which can be seeded in a single well of a 12 well plate.

NOTE: For protein isolation, prepare standard RIPA buffer containing phosphatase and protease inhibitors (Table of Materials). Using at least three domes is recommended, which can be seeded in a single 12 well.

NOTE: Cell viability can be assessed using the commercially available cell viability assay kit and a luminometer. Prepare buffers according to the manufacturer's instructions. Five replicates per condition is recommended: one replicate consisting of one 35 µL basement membrane matrix dome in one well of a 24 well plate.

8. Preparation of organoids for xenografting

NOTE: Organoids are also amenable for subcutaneous grafting in both immune compromised animals, as well as, isogenic mice. To ensure injected organoids are distinguishable in vivo, label organoids with a constitutively expressing fluorophore5. It is recommended to perform a pilot experiment for grafting using 5 x 105 cells to 2 x 106 cells per injection, with increments of 5 x 106 cells, as grafting efficiency varies between organoid lines.

Pharmacological response
Based on seeding efficiency, seeding of 1,000-10,000 cells in 35 µL of basement membrane matrix dome in a 24 well plate was performed. Recommended cell seeding numbers based on organoid formation efficiency is provided in Table 1. However, organoid proliferation speeds can differ greatly depending on genotype. Additional changes to the cell seeding number can be made based on proliferation.

In Figure 2, the effects of anti-androgenic molecules on growth were tested in murine organoids with different genotypes. A total of 2,500 cells were seeded from murine organoids with a WT genotype, p53 loss, Pten loss, or dual p53 and Pten loss. p53 and Pten loss was initiated by lentiviral introduction of a gRNA targeting the p53 and/or Pten locus in organoids constitutively expressing Cas9 under the control of the Rosa26 promoter with a C57/Bl6 genetic background9.

Patient-derived PCa organoids are heterogeneous in phenotype and genotype11,12; therefore, responses to drugs can differ greatly between human PCa organoid lines. In Figure 3, the anti-androgenic molecules response of two distinct human PCa organoids, MSKPCA2 and MSKPCA3 are shown. Proliferation of MSKPCA2 organoids was strongly inhibited by anti-androgenic molecules, whereas MSKPCA3 organoids remained unaffected (Figure 3A,B). MSKCPCA2 organoids expressed high levels of AR and the AR-target FKBP5, and they expressed hallmark luminal proteins such as CK8 and CK18. In contrast, MSKPCA3 organoids also expressed basal (CK5) and mesenchymal (Vimentin) markers and showed no expression of FKBP5. These results suggest that these organoids model a non-luminal androgen-independent phenotype. 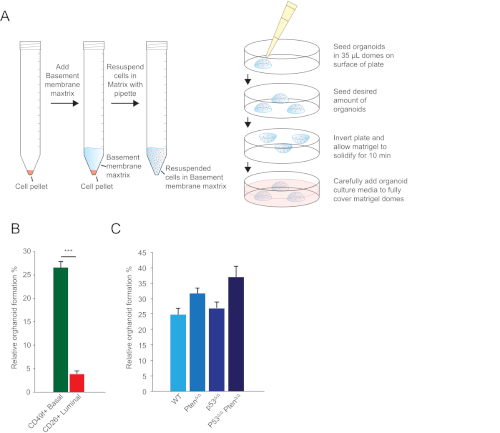 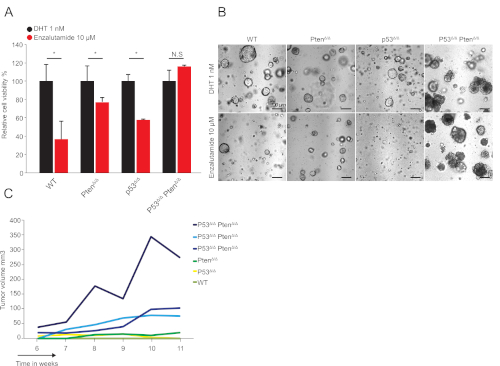 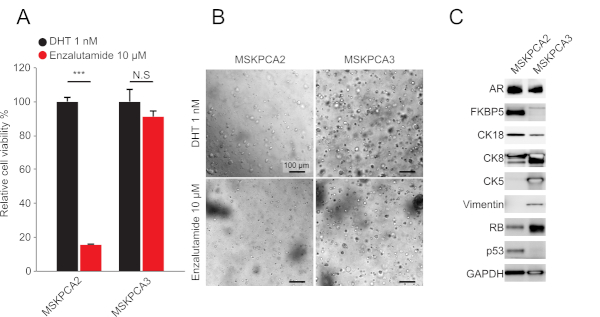 There are two critical steps in this protocol. The first is determining the seeding efficiency and growth rate of organoids. Organoid growth speed varies greatly. This is dependent on species, as murine derived organoids grow about two-fold faster than human-derived organoids. Apart from species, growth speed is dependent on genotype and phenotype. However, when seeding efficiency and growth speed are determined, this protocol can be adapted to all prostate organoid types.

The second critical step is working with the protein-matrix-based 3D culture to prepare for subsequent downstream applications. The introduction of seeding variation by viscosity of the basement membrane matrix during plating can be avoided by using diluted (70%) basement membrane matrix, as described. Properly breaking up the polymerized matrix without excessively disturbing the organoids is also described in detail. This protocol enables disruption of the matrix without introducing variation in the organoid readout, which can be adapted for the screening of drug libraries for different genetic backgrounds in PCa. Moreover, by performing CRISPR/Cas9- or shRNA-based expression interference, genes conferring drug resistance can be queried.

The organoid medium composition favors the growth of benign prostate epithelium over cancer tissue, thus no primary hormone sensitive PCa organoid lines have been established. Currently, all human PCa organoids are derived from patients with advanced metastatic anti-androgen resistant PCa; hence, most of these lines are anti-androgen resistant and suitable for identifying new treatments. As proof-of-concept, delta-like 3 (DLL3) has been identified as a therapeutic target using patient-derived NEPC organoids that are targetable with rovalpituzumab tesirine13. This method is suitable for these types of experiments and is also suitable for prostate organoids from normal benign tissue, primary prostate cancer, and CTCs.

One shortcoming of prostate organoid culture is the absence of a cellular niche. Thus, contributions to drug resistance by non-tumor cells cannot be studied using the current platform. However, co-cultures of colorectal cancer and lung cancer organoids with autologous T-cells have recently been established, enabling studies of interactions between the tumor and immune system14. Other co-culture systems may be established to further study non-cell-autonomous interactions.

In conclusion, this report provides a detailed protocol for the reproducible assessment of pharmacological responses in prostate organoids and subsequent downstream applications. Importantly, this protocol is broadly applicable and can be used for organoid cultures of other organs, including the colon15, small intestine16 , stomach17,18, liver19, pancreas20, kidney21, and mammary gland22.

C.L.S serves on the board of directors of Novartis; is a cofounder of ORIC Pharmaceuticals and coinventor of enzalutamide and apalutamide; is a science advisor to Agios, Beigene, Blueprint, Column Group, Foghorn, Housey Pharma, Nextech, KSQ, Petra, and PMV; and is a cofounder of Seragon, purchased by Genentech/Roche in 2014. W.R.K. is a coinventor and patent holder of organoid technology.