Bacterial toxins bind to cholesterol in membranes, forming pores that allow for leakage of cellular contents and influx of materials from the external environment. The cell can either recover from this insult, which requires active membrane repair processes, or else die depending on the amount of toxin exposure and cell type1. In addition, these toxins induce strong inflammatory responses in infected hosts through activation of immune cells, including macrophages, which produce an array of pro-inflammatory cytokines2. Many Gram positive bacteria produce cholesterol binding toxins which have been shown to contribute to their virulence through largely uncharacterized mechanisms.

Morphologic changes in the plasma membrane of cells exposed to these toxins include their sequestration into cholesterol-enriched surface protrusions, which can be shed into the extracellular space, suggesting an intrinsic cellular defense mechanism3,4. This process occurs on all cells in the absence of metabolic activity, and can be visualized using EM after chemical fixation4. In immune cells such as macrophages that mediate inflammation in response to toxin exposure, induced membrane vesicles are suggested to contain cytokines of the IL-1 family and may be responsible both for shedding toxin and disseminating these pro-inflammatory cytokines5,6,7. A link between IL-1β release and a specific type of cell death, termed pyroptosis has been suggested, as both are caspase-1 dependent processes8. To sort out the complexities of this macrophage response, which includes toxin binding, shedding of membrane vesicles, cytokine release, and potentially cell death, we have developed labeling techniques and fluorescence microscopy methods that allow for real time visualization of toxin-cell interactions, including measurements of dysfunction and death (Figure 1). Use of live cell imaging is necessary due to limitations in other techniques. Biochemical approaches cannot resolve effects occurring in individual cells, while flow cytometry does not offer high resolution, real-time visualization of individual cells. The methods described here can be applied to kinetic analysis of responses induced by other stimuli involving complex phenotypic changes in cells.

4. Micropipette Delivery of Toxin to Cells in Culture Dishes

Typically 107-108 U/ml SLO can be obtained with a protein concentration of 4 mg/ml. The amount of toxin required for cell lysis varies by cell type, but is usually 125-500 U/ml SLO (Figure 2B). Cell types like macrophages can be more resistant (4000 U/ml) though others (especially T cell lines) are more sensitive. These sensitivities correspond with commercially available SLO. Toxin activity decreases roughly 2-fold with each freeze-thaw, so hemolytic assays with each batch or thaw of toxin are needed to verify toxin activity. Toxin is also very sensitive to heat and oxidation10 in the absence of cholesterol-containing membranes, so care must be taken when working with the protein.

Microdelivery of the toxin allows the comparison of untreated cells with toxin-treated cells in the same dish. It also provides an internal control to toxin activity, since a diffusion gradient will be established from the micropipette tip. Regions close to the micropipette will show cell death, typified by calcein loss and ethidium homodimer uptake, whereas regions further away from the tip will show no damage (Figure 3). Given the potency of the toxin used, small amounts that leak from the micropipette even in the presence of back pressure can destroy cells as the tip is moved along the field (Figure 3). Using the safety option on the microinjector will avoid this loss.

In addition to standard wide-field microscopy, microdelivery can be combined with high speed 3D confocal microscopy. The advantage of a confocal microscope over wide field is the ability to resolve events in the z-dimension and analyze individual planes. With current technologies, use of a spinning disc confocal is necessary to achieve the high speeds needed. These advantages allow the visualization of microparticles being shed from dendritic cells following toxin injection (Figure 5). These microparticles are shed as part of the cellular repair process4. Toxin molecules are concentrated on blebs, which are shed to eliminate toxin4. Without confocal imaging, detecting the microparticles would be difficult, and potentially lead to the conclusion that toxin is not eliminated in this manner. 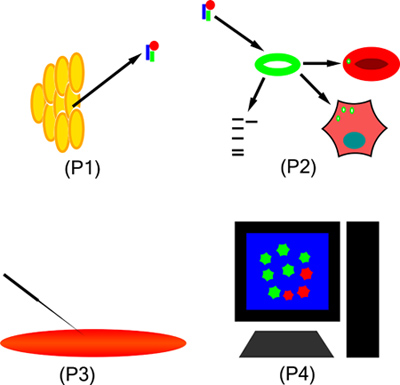 Figure 1. Overall workflow for generating and utilizing toxins in live cell imaging. Toxin is purified, subjected to rigorous quality control, and then delivered via micropipette to cells that have been previously labeled with viability dyes, calcium indicators or antibodies to surface proteins. Data is acquired on the microscope and then analyzed using software, such as Metamorph or Elements. 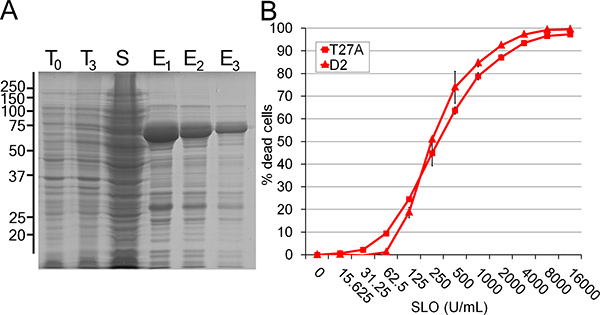 Figure 2. Quality control of purified SLO. (A) Samples of bacteria before (T0) and after (T3) toxin induction, supernatant following purification (S), and each of three elutions (E1-E3) were resolved by SDS-PAGE and stained with Coomassie blue. (B) Either dendritic cell line D2 or leukemia cell line T27A were challenged with various concentrations of SLO for 5 min at 37 °C in the presence of propidium iodide and examined by flow cytometry. The specific lysis was determined by the following formula: specific lysis= (%PIhighexp-%PIhighctl)/(100-%PIhighctl)*100 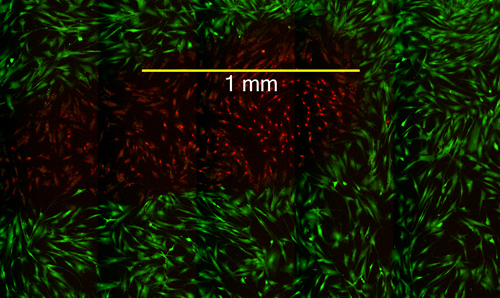 Figure 3. Cell death shown by loss of calcein signal and uptake of EtBr in human dermal fibroblasts following localized exposure to the bacterial toxin anthrolysin O. Fibroblasts were incubated with calcein AM and ethidium homodimer using a live dead kit from Life Technologies. 100 pg of the cholesterol binding toxin anthrolysin O13 (a gift from Dr. Richard Rest, Drexel University) was delivered by micropipette into the center of the culture dish, and widefield fluorescence images collected using a 40x objective after 30 min. Images from multiple fields were combined to generate the larger image shown using Metamorph. 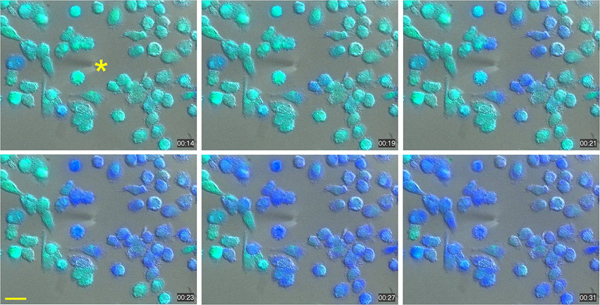 Figure 4. Calcium influx into cytosol of human dendritic cells exposed to the bacterial toxin SLO. Cells were loaded with fura2 AM before delivery of a solution of SLO at a concentration of 80 U/μl and a flow rate of 1 nl/min. The tip of the micropipette used for delivery is indicated at time 0 by a yellow asterisk. Images were collected continuously in widefield mode at 340 and 380 nm excitation wavelengths, and the ratio of emissions used to determine cytosolic calcium levels. Shift from green to blue pseudocolor indicates an increase in cytosolic calcium levels. The time mark in each panel indicates seconds after beginning addition of toxin. Scale bar is 20 μm. Click here to view larger figure. 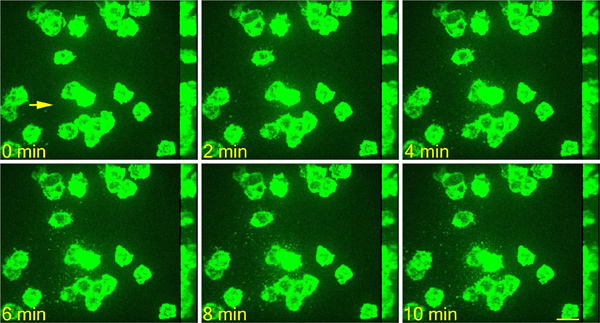 Figure 5. Release of microvesicles from the surface of dendritic cells exposed to SLO. Cells were pre-incubated with anti-CD11c conjugated to APC to label the plasma membrane, followed by delivery of a bolus of 3x10-3 U of SLO. 3-D reconstructions were generated from confocal z-stacks collected at each time point indicated in minutes. The tip of the microinjector was identified using DIC imaging and is indicated by the yellow arrow. Scale bar is 20 μm.

The techniques described here allow the examination of the responses of immune cells to bacterial toxins. The most critical step is the handling and dosing of the toxin. Toxin activity can be extremely variable, even between different aliquots of the same preparation, due to its fragility. This necessitates either testing each aliquot of toxin against a reference cell line or RBCs or using toxin gradients. Toxin gradients, as delivered by micropipette, allow the full spectrum of toxin-induced activities to be observed in real-time, but does not lend itself to biochemical analysis.

Micropipette delivery of the toxin can be challenging. Unlike standard microinjection, however, penetration of the cell is not required for this assay. In fact, care must be taken not to damage the cells with the needle itself, as this will elicit a similar membrane repair response12. In immune cells, particularly, the calcium fluxes generated by needle contact will propagate via nanotubes to other cells within the culture11. Not injecting cells will also extend the lifetime of the needle. Similarly, use of a Bertrand lens to follow the needle's descent to the cells removes some uncertainty in the positioning of the micropipette. Although damaged needles will leak toxin more rapidly than intact needles, they may still be used to generate preliminary results. The microinjector system allows for multiple injections, should a higher toxin gradient be desired. Alternatively, injection duration can also be modified to alter the dose delivered. The microinjector also allows multiple experiments to be performed within one dish. Furthermore, the effect of rechallenge can be studied. Although we describe experiments examining immune cells, these methods could be adapted to other cell lines as well. 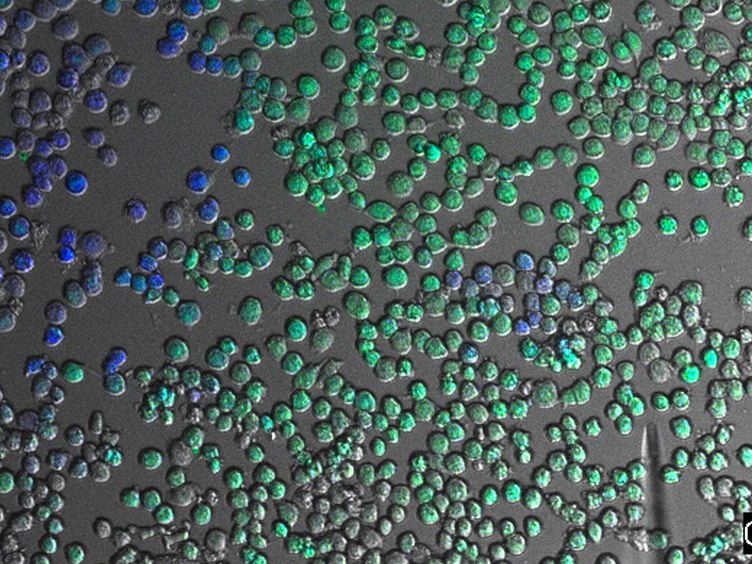