The mouse femoral artery wire injury model of restenosis is technically challenging. In this protocol we show the key technical details essential for successfully performing wire injury to induce consistent neointima for studies of restenosis.

Cardiovascular disease caused by atherosclerosis is the leading cause of death in the developed world. Narrowing of the vessel lumen, due to atherosclerotic plaque development or the rupturing of established plaques, interrupts normal blood flow leading to various morbidities such as myocardial infarction and stroke. In the clinic endovascular procedures such as angioplasty are commonly performed to reopen the lumen. However, these treatments inevitably damage the vessel wall as well as the vascular endothelium, triggering an excessive healing response and the development of a neointimal plaque that extends into the lumen causing vessel restenosis (re-narrowing). Restenosis remains a major cause of failure of endovascular treatments for atherosclerosis. Thus, preclinical animal models of restenosis are vitally important for investigating the pathophysiological mechanisms as well as translational approaches to vascular interventions. Among several murine experimental models, femoral artery wire injury is widely accepted as the most suitable for studies of post-angioplasty restenosis because it closely resembles the angioplasty procedure that injures both endothelium and vessel wall. However, many researchers have difficulty utilizing this model due to its high degree of technical difficulty. This is primarily because a metal wire needs to be inserted into the femoral artery, which is approximately three times thinner than the wire, to generate sufficient injury to induce prominent neointima. Here, we describe the essential surgical details to effectively overcome the major technical difficulties of this model. By following the presented procedures, performing the mouse femoral artery wire injury becomes easier. Once familiarized, the whole procedure can be completed within 20 min.

In the era of expanded application of endovascular treatments for various cardiovascular diseases, restenosis after angioplasty is one of the major problems for patients undergoing such treatments. Damage to the vascular endothelium at the time of angioplasty, in concert with the atherosclerotic background, induces excessive smooth muscle cell proliferation in the medial layer, resulting in neointimal hyperplasia.1,2 A viable animal model that recapitulates post-angioplasty neointimal hyperplasia is, thus, important not only for the investigation of disease mechanisms but also for the development of effective therapeutics to treat this pathology.

Mice represent an excellent model animal to recapitulate neointimal hyperplasia for the following reasons: the genetic backgrounds of experimental mice are well established; a wide variety of genetically-modified strains are available;2 obtaining littermates of the same background is easy; and the cost of the animals is relatively low. Arterial ligation model and wire injury model are the two most common mouse models of mechanically-induced neointimal hyperplasia. The arterial ligation model is easy to create, but physiologically dissimilar to the actual angioplasty procedure. The wire injury model closely mimics actual angioplasty procedures but is technically difficult due to the small size of mouse arteries.2,3 Sata et al. first described a wire injury method for mouse femoral arteries based on the anatomical structure of the vasculature and the use of proper-sized flexible wire. Utilizing this technique, they succeeded in reproducibly inducing neointimal hyperplasia in various strains of mice.4

Although femoral wire injury is a well-established model, some of the technical aspects of the technique are highly challenging compared to other models such as ligation.5 The purpose of this paper is to describe our mouse wire injury model procedures in detail, which is a modified version of Sata’s original method. We have made two main modifications: 1) Looping only the arteries, and 2) No lidocaine use.

NOTE: Ethics Statement: All procedures conform to the Guide for the Care and Use of Laboratory Animals (National Academies Press, 8th edition, 2011),  and protocols approved by the Institutional Animal Care and Use Committee at the University of Wisconsin. All surgeries were performed under isoflurane anesthesia (through inhaling, flow rate 2 ml/min), and all efforts were made to minimize suffering. Animals were euthanized in a chamber gradually filled with CO2.

2. Exposure of Femoral Artery and Branches

NOTE: Figure 1B shows the gross vasculature anatomy in the upper thigh. The superficial femoral artery (SFA) can be observed through a dissecting microscope when the skin incision is properly made along the midline of the medial thigh.

Four weeks following surgery, harvest the wire-injured femoral artery and make a paraffin block specimen to analyze the neointima formation. Induce general anesthesia as described above. Open the chest immediately and insert a 20-gauge butterfly needle to the left ventricle. Connect the line to an infusion bottle. Perform perfusion fixation via drip infusion of PBS followed by 4 % paraformaldehyde (usually 10–20 ml, each). The infusion bottle is placed approximately 140 cm higher than the heart level so that the animal is perfused at physiological pressure.Wait for 20 min then take out the wire-injured CFA and fix it in 4 % paraformaldehyde overnight at 4 °C. Make a paraffin block of the specimen using standard histological techniques and prepare cross sections of 5-μm thickness for histological staining.

Figure 1: Schematic Illustrations of Skin Incision and Vasculature Anatomy. (A) An appropriate skin incision is about 1.5 cm in length, along the midline of medial upper thigh. (B) Find the superficial femoral artery first, the common femoral artery next, and finally, the deep femoral artery. Dissect each artery carefully without damaging the adjacent vein. 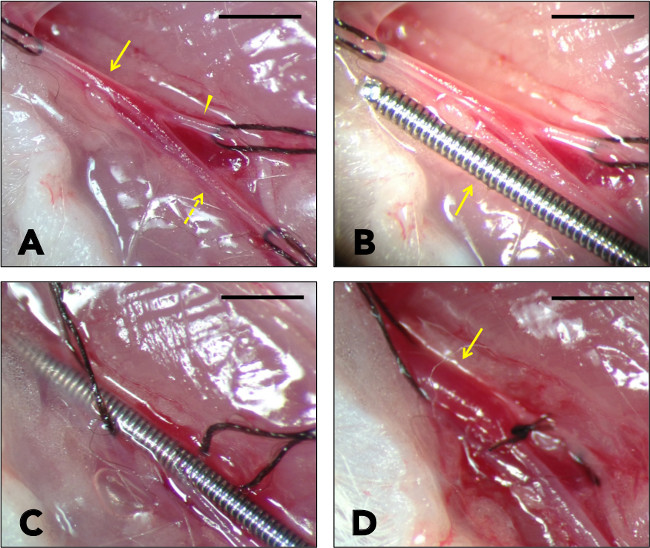 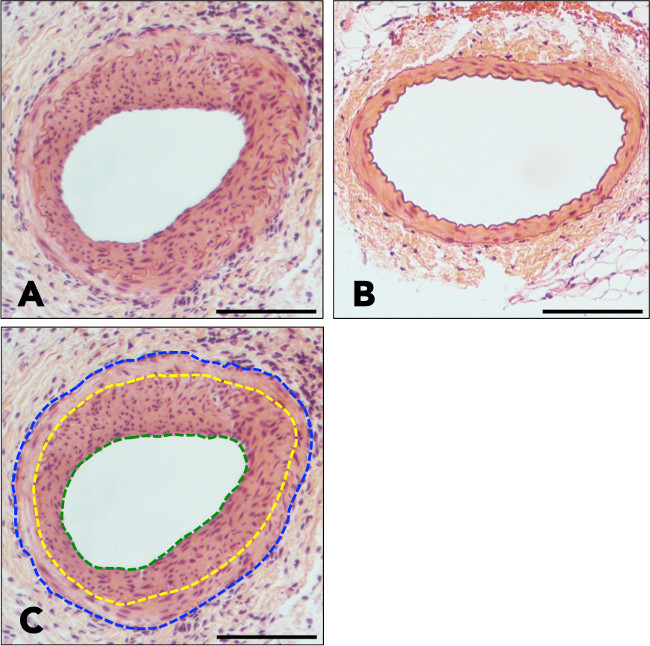 The wire injury procedure is applicable to all strains of mice as long as their anatomical structures are similar.4 In this paper, we used male C57BL/6 mice with an age of 12–16 weeks. As we have learned from our preliminary studies, the femoral arteries of mice younger than 10 weeks are often so small that wire insertion is quite challenging. On the other hand, wire insertion in mice older than 16 weeks is technically easier but tends to result in more variable neointimal hyperplasia. Female mice tend to incur less neointimal formation than males. Although the wire injury procedure can be performed on either side of the femoral arteries, we prefer the left side because of the anatomical accessibility for right-handed operators.

To make a successful wire injury in mouse femoral arteries, the key is to operate under a dissecting microscope with sufficient magnification and to use fine instruments – microtweezers and microscissors in particular. Microtweezers with sharp tips are useful to dissect out the tissues surrounding the artery whereas the ones with blunt tips are useful to place a suture loop around the artery and to dilate the wire entrance hole made by a sharp arteriotomy with microscissors.

An anatomical dissection of the artery is another key. Around the arterial adventitia there exists a thin plane where the dissection can be carried out easily and smoothly. Find the plane first, then proceed with the dissection. Also, try to dissect out the adjacent vein only at the site of suture loops to avoid vein damage, which is the major cause of bleeding in this procedure. Although in the original method the artery and vein are looped together,4 we find that looping artery only gives better control for both hemostasis and wire insertion.

Wire insertion is the most difficult part of this procedure. A 0.015-inch wire is roughly three times thicker than the DFA, the access artery. The key techniques here are: dilating the DFA itself before arteriotomy; making a small entrance hole which is gradually dilated with microtweezer tips; and avoiding forceful wire insertion – those techniques are detailed in the protocol section. While in the original method lidocaine is applied to dilate the artery before wire insertion4, we find it unnecessary.

Neointima formation after femoral artery wire injury progresses with time, peaks at 3–4 weeks after injury, and remains stable at 8 weeks.4,8 The authors usually wait for 4 weeks based on our preliminary data that the amount of neointima at 3 weeks is generally less than the amount at 4 weeks after wire injury (data not shown).

Interestingly, the responses to arterial injury differ between various mouse strains. According to several reports investigating differences between mouse strains after femoral or carotid artery injury, FVB/N mice display the highest amount of neointima formation, followed by 129/SvJ, C3H/HeJ, BALB/C, and C57BL/6, respectively.4,9,10 These characteristics should be considered when composing an experimental plan. The femoral injury model can also be utilized for investigation of inflammatory changes after vascular injury. Inflammatory cell infiltration was reported to increase significantly three days after injury.11

In conclusion, the wire injury model using mouse femoral arteries is particularly suitable to investigate post-angioplasty restenosis, and the process can be performed safely and easily using the method presented here. The whole procedure can be finished within 20 min once the techniques are fully familiarized. 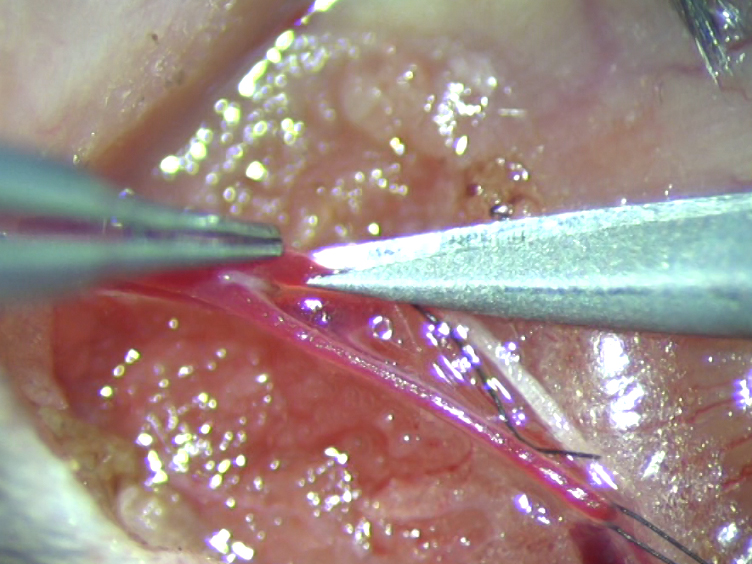