NOTE: Vendor information for all reagents used in this protocol has been listed in Table 1 and Materials List. All solutions and equipment coming into contact with cells must be sterile, and aseptic technique should be used accordingly. Perform all culture incubations in a humidified 37 °C, 5% CO2 incubator unless otherwise specified. In this protocol, all differentiations are performed in 6-well plates, in which the hiPSCs are seeded. Following differentiation and purification, cells can be dissociated and replated for downstream use.

NOTE: Closely follow this procedure as it may lead to optimal culturing and downstream differentiation of hiPSCs into hiPSC-CMs following the freeze/thaw cycle.

NOTE: Closely follow this procedure as it may lead to optimal culturing and downstream differentiation of hiPSCs into hiPSC-CMs following the freeze/thaw cycle.

NOTE: All media should be at least at RT when added.

The morphological changes during hiPSC differentiation.

The hiPSC cultured in feeder-free plates grew as flat, two-dimensional colonies. Upon reaching around 85% confluency, hiPSCs were treated with 6 µM CHIR for differentiation (Figure 1A). Substantial amounts of cell death, a normal and common phenomenon, were observed after 24 hr of CHIR treatment. After two days of CHIR treatment, the hiPSCs continued to differentiate towards a mesodermal fate. In comparison to cells in hiPSC colonies, cell size for these day 2 cells increased. Cell number also increased through cell division (Figure 1B). At day 5, the mesodermal cells were directed towards the cardiac lineage (cardiac mesoderm). At this time, cells begin coalescing and forming characteristic, branch-like structures (Figure 1C). At day 10, branch-like structures were highly pronounced, and cardiomyocytes started spontaneously beating (Figure 1D). Terminally-differentiated cardiomyocytes will not proliferate beyond this point. A timeline of the differentiation protocol is shown in Figure 2. 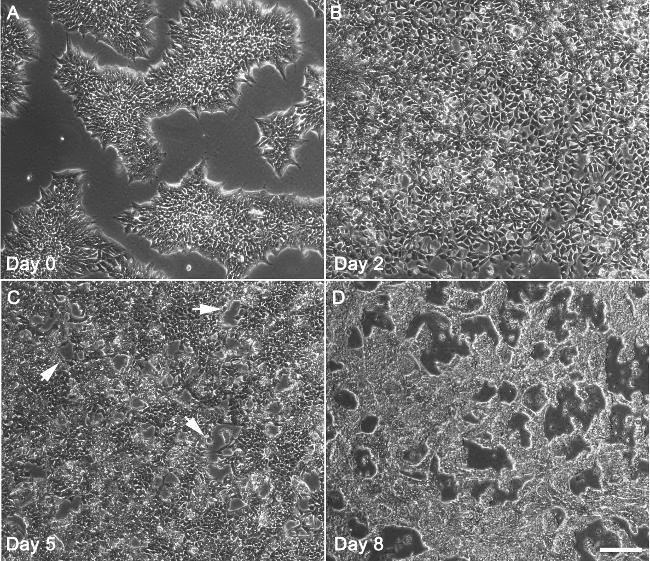 Figure 1. The sequential morphological changes during hiPSC differentiation towards the cardiac lineage. (A) Undifferentiated hiPSCs at day 0 exhibit typical colony morphology and reached around 85% confluency. (B) At day 2, cells after treatment with CHIR for two days reached 100% confluency and entered the mesodermal lineage. (C) At day 5, the cells after treatment with IWR1 for 2 days entered the cardiac mesoderm stage. Some cells began to fuse and form characteristic branch-like morphologies (indicated by arrows). (D) At day 7-10, branch-like structures are highly evident, and cardiomyocytes start spontaneously beating. Bar = 200 μm. Please click here to view a larger version of this figure. 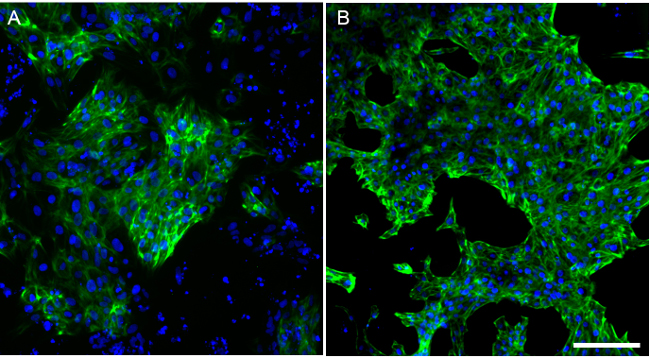 Figure 3. Immunofluorescence reveals purification of cardiomyocytes following glucose starvation. (A) Unpurified cells after 13 days of differentiation were stained with Cardiac Troponin T (cTnT). Most cells have differentiated into cardiomyocytes and were cTnT positive, but a number of non-cardiac, cTnT-negative cells are also present. (B) In contrast, after a 3 day glucose starvation beginning at day 10, almost all of the surviving cells were cTnT positive by day 13. Scale bar = 200 μm. Please click here to view a larger version of this figure.

In addition, the differentiated cardiomyocytes with a glucose starvation method were further purified, which takes advantage of the distinct glucose metabolic flow existing between cardiomyocytes and non-cardiomyocytes8. It is essential to note that the effectiveness of the glucose starvation method is density-dependent (i.e., differentiations that yielded higher percentages of cardiomyocytes are more likely to achieve greater cardiomyocyte survival). However, the transition to the low glucose medium is also a stressful condition for the cardiomyocytes. It is important to change the cells back to the regular RPMI/B27 with insulin medium after 3 days of glucose starvation. In this protocol, a feeder-free growth system was utilized, in which pluripotent stem cells were not grown on feeder mouse embryonic fibroblasts (MEFs). However, prior cardiac differentiation protocols have utilized feeder-based systems to produce cardiomyocytes from pluripotent stem cells5. Likewise, prior protocols have also used mTeSR1 medium for stem cell maintenance, but the E8 media and feeder-free system utilized here is superior due to its simplicity and lack of excess xenogeneic components such as bovine serum albumin and mouse embryonic fibroblasts.

Currently, pluripotent stem cell differentiation towards cardiomyocyte lineages is largely robust, but still suffers from hiPSC line-to-line variability in terms of efficiency. This remains a major issue in the cardiac differentiation field and will require further study. The differentiation efficiency is improved by proper maintenance of hiPSC lines, and in particular, preventing overconfluency during hiPSC maintenance. Additional variability arises from cell seeding during the passaging process, as an evenly seeded monolayer of hiPSCs tends to give rise to the best overall differentiations. Here, a mouse-derived, Matrigel-based ECMS for cell seeding during cell culture was successfully utilized, but an eventual transition to xeno-free substrates is recommended. In regards to cell seeding on ECMS, uneven seeding often results in uneven distribution of cardiomyocytes within a particular well. For example, if hiPSCs are seeded unevenly, the edges of a well in a six-well plate may give rise to higher numbers of cardiomyocytes than the center of the well. These uneven seeding conditions may give rise to low efficiency differentiations and a larger number of non-cardiomyocyte, mesodermal derivatives such as fibroblasts and smooth muscle cells. We have also observed that low efficiency differentiations (below 50%) are much more difficult to purify using the glucose deprivation process mentioned here. Another side effect of long-term glucose starvation is a potential loss in cardiomyocyte viability. Although the cardiomyocytes are able to metabolize lactate in the absence of glucose, we find that this switch to a low-glucose environment is stressful for the cells. Cells may stop spontaneously beating, and some cell loss may be observed if glucose starvation is prolonged beyond the recommended time. This enhanced sensitivity to glucose deprivation may be reflective of the well-established developmental, functional, and electrophysiological immaturity of stem cell-derived cardiomyocytes in comparison to true adult cardiomyocytes13.

The authors do not declare competing interests.

This work was supported in part by the NIH/NHBI (U01 HL099776-5), the NIH Director’s New Innovator Award (DP2 OD004411-2), the California Institute of Regenerative Medicine (RB3-05129), the American Heart Association (14GRNT18630016) and the Endowed Faculty Scholar Award from the Lucile Packard Foundation for Children and the Child Health Research Institute at Stanford (to SMW). We also acknowledge funding support from the American Heart Association Predoctoral Fellowship 13PRE15770000, and National Science Foundation Graduate Research Fellowship Program DGE-114747 (AS). 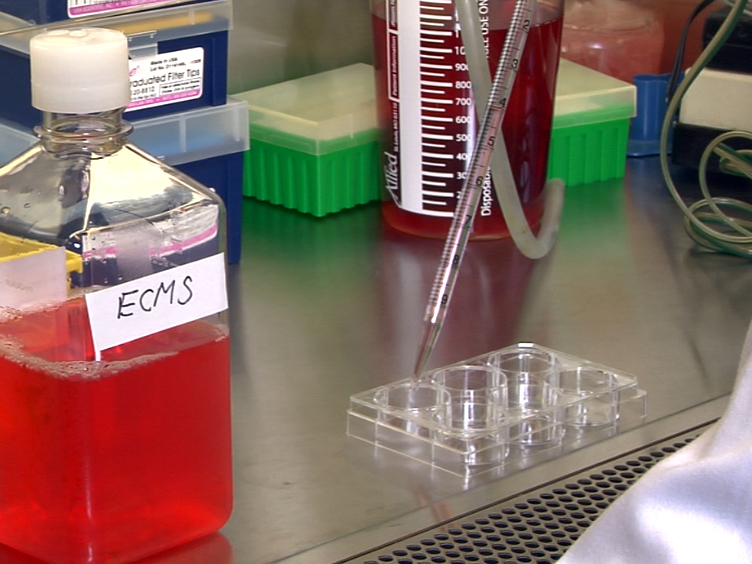