A protocol is presented for cell culture of macrophage colony-stimulating factor (M-CSF) differentiated human monocyte-derived macrophages. The protocol utilizes cryopreservation of monocytes coupled with their bulk differentiation into macrophages. Then harvested macrophages can then be seeded into culture wells at required cell densities for carrying out experiments.

Leukapheresis was carried out under a human subject's research protocol approved by a National Institutes of Health institutional review board.

1. Isolation and Cryopreservation of Monocytes

2. Differentiation of Monocytes into Macrophages

The viability of fresh or cryopreserved monocytes was greater than 95% as determined with Trypan Blue staining 9. Figure 1 and Figure 2 compare at lower and higher magnifications, respectively, the progress of fresh and cryopreserved (i.e., frozen) monocyte differentiation into macrophages. Note that the fresh compared with cryopreserved monocytes show a subpopulation of differentiating monocytes that do not spread but remain rounded. Phase-lucent vacuoles occur in the monocyte-derived macrophages in both conditions. These vacuoles represent macropinosomes characteristic of M-CSF type macrophages as previously described 10,11.

Cryopreserving macrophages after their harvesting from the flasks in which they were differentiated from monocytes did not produce successful macrophage cultures (Figure 3). Such cultures showed very sparse cell attachment possibly due to poor viability after cryopreservation. 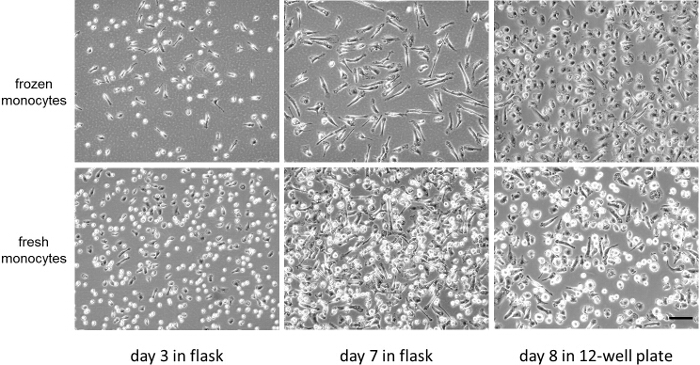 Figure 1: Comparison of fresh versus cryopreserved monocytes used to produce macrophages (low magnification). Phase-contrast microscopic images of cryopreserved (frozen) and fresh monocytes during their M-CSF induced differentiation into macrophages. Shown are monocytes during culture in flasks at 3 and 7 days, and on day 8, one day after their harvesting and replating into 12-well culture plates. Bar = 100 µm and applies to all. Please click here to view a larger version of this figure. 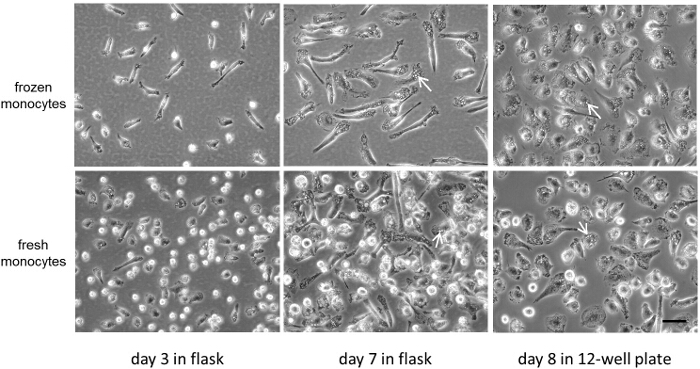 Figure 2: Comparison of fresh versus cryopreserved monocytes used to produce macrophages (high magnification). Monocytes were cultured as described in Figure 1 legend and shown here at higher magnification. Phase-lucent vacuoles are macropinosomes (white arrows). Bar = 50 µm and applies to all. Please click here to view a larger version of this figure. 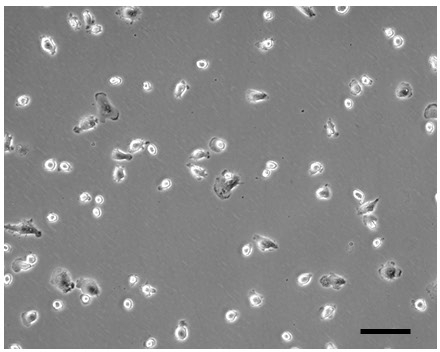 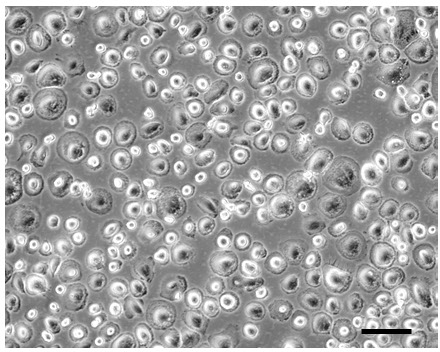 Generating defined macrophage types can clarify some of the conflicting results obtained by investigators when studying macrophage biology. The use of various culture conditions and differentiation factors to generate primary human macrophages can lead to very different macrophage types, a fact that may not be appreciated by the researcher. For example, macrophages sometimes are generated from human monocytes using no serum, human serum alone, human serum supplemented with M-CSF, FBS alone, or FBS containing M-CSF or GM-CSF. As reported previously and as we have also observed, monocytes cultured for a week without serum or with FBS without added differentiation factors do not remain viable 3. As mentioned above, monocytes cultured with human serum alone or supplemented with M-CSF generate macrophages that show the "fried egg" morphology characteristic of monocytes differentiated with FBS plus GM-CSF. Thus, in the presence of human serum the M-CSF type macrophage showing a more elongated morphology is not obtained even though monocytes have been differentiated with M-CSF.

In the protocol presented, during culture with M-CSF, IL-10 has been routinely added as described previously 16. This cytokine promotes the growth and differentiation of the macrophages and produces a more homogeneous elongated morphology of the macrophages. In addition, IL-10 inhibits GM-CSF-dependent monocyte survival by inhibiting the signaling events induced by GM-CSF 17. However, investigators should consider that IL-10 may affect other cell responses under study, and therefore, may wish to omit IL-10. Before using the current protocol employing proliferation and differentiation of the monocytes in a flask, macrophage cultures were initiated by directly plating elutriated monocytes into culture wells and differentiating them for 7 days prior to initiating experiments. However, even with the addition of IL-10, some of these macrophage cultures showed small numbers (usually less than 10%) of "fried egg" GM-CSF type macrophages contaminating the elongated M-CSF type macrophages. With the current protocol, GM-CSF type macrophage contamination does not occur for reasons that are not clear. However, it is not because GM-CSF macrophage type precursor monocytes are lost during freezing, as culturing the cryopreserved monocytes with FBS + GM-CSF produces excellent GM-CSF type cultures (see Figure 4).

Critical steps in the protocol include immediately placing monocytes into the freezer following addition of dimethyl sulfoxide, and immediately transferring thawed monocytes to culture medium. Although it is common to remove DMSO by centrifuging frozen cells before they are seeded into culture, we did not find this was a necessary step in successful culture of the monocytes. However, investigators may need to do this if the concentration of residual DMSO (2 µl/ml) is higher than what was used in the above protocol. It is important not to rinse monocytes until 48 hours following their seeding in culture flasks. Otherwise, some monocytes may be lost depending on their degree of adhesion to the culture surface. On the other hand, once the monocytes differentiate into macrophages, increased adhesion of the macrophages may require longer trypsin treatment to remove them, or a cell lifter can be employed to facilitate release after the initial trypsin treatment. If monocytes do not proliferate and differentiate, this could be due to some unusual characteristic of the monocyte donor, loss of activity of M-CSF, or due to the lot of FBS used. Also, of possible concern when cultures do not develop is contamination of reagents with endotoxin, an agent that inhibits macrophage proliferation 22. 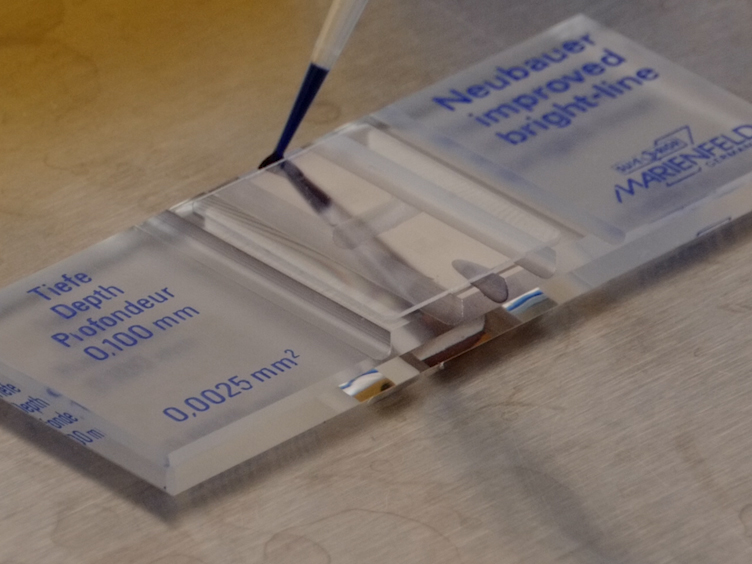