We describe a comprehensive and practical protocol for fluorescence recovery after photobleaching experiments with live cells. Although the protocol was used to measure the mobility of yellow fluorescent protein-tagged p62 in aggresome-like induced structures, it can be applied to a variety of microscopy systems and fluorescent proteins.

Fluorescence recovery after photobleaching (FRAP) is a microscopy technique that can be used to quantify protein mobility in live cells. In a typical FRAP experiment, steady-state fluorescence is observed by repeated imaging with low-intensity laser light. Subsequently, the fluorescent molecules are rapidly and irreversibly impaired via brief exposure to high-intensity laser light. Information about protein mobility is obtained by monitoring the recovery of fluorescence. We used FRAP to determine the mobility of p62 in aggresome-like induced structures (ALIS) in murine macrophages after stimulation with lipopolysaccharide (LPS). Because many existing FRAP protocols are either incomplete or complex, our goal was to provide a comprehensive, practical, and straightforward step-by-step protocol for FRAP experiments with live cells. Here, we describe RAW264.7 macrophage transfection with yellow fluorescent protein-p62 (YFP-p62), induction of ALIS by exposing the cells to LPS, and a step-by-step method for collecting prebleach and postbleach FRAP images and data analysis. Finally, we discuss important factors to consider when conducting a FRAP experiment.

Fluorescence recovery after photobleaching (FRAP) is a microscopy technique that can be used to quantify protein dynamics in live cells1,2. The popularity of FRAP has increased because of the widespread commercial availability of laser scanning confocal microscopes with high resolution, speed, and sensitivity, and a "rainbow" of genetically encoded fluorescent proteins, such as green fluorescent protein (GFP) and yellow fluorescent protein (YFP)3. Genetically encoded fluorescent proteins are fused to a protein of interest to allow for the subcellular localization of the protein of interest. In a typical FRAP experiment, the steady-state fluorescence in an acquisition region of interest (ROI) within a cell is observed via repeated imaging of that ROI with low-intensity laser light. Subsequently, the fluorescent molecules are rapidly and irreversibly impaired in a predefined subset of the acquisition ROI, hereafter referred to as the bleach ROI, by brief exposure to high-intensity laser light. As new unbleached proteins replenish bleached proteins over time, the speed and intensity of fluorescence recovery in the bleach ROI provides information about protein mobility (Figure 1)4.

Our interest in determining the mobility of the ubiquitin binding protein p62 (also known as sequestosome-1) in aggresome-like induced structures (ALIS) in murine RAW264.7 macrophages after stimulation with lipopolysaccharide (LPS) led us to review the FRAP literature. Unfortunately, many of the existing FRAP protocols are incomplete or inordinately complex5,6,7,8,9. Some do not provide detailed information about the laser settings, beam path configuration, and image acquisition parameters5,6,7,8,9. Others omitted key details regarding data analysis, such as how to address the issue of bleach ROI drift6,9 or how to calculate important recovery parameters, including the mobile fraction (Mf), immobile fraction (If), and half-time of recovery (t½)5,7. Conversely, others placed too much emphasis on complex mathematical formulas used to calculate Mf, If, and t1/25,6,8,9. Thus, our purpose is to provide a comprehensive, practical, and straightforward step-by-step protocol for FRAP experiments with live cells.

2. Induction of ALIS with Lipopolysaccharide (LPS)

3. Set-up of the Confocal Microscope and Selecting the Region of Interest

Shown here are the results of a typical experiment in which we used FRAP to examine the degree of mobility of p62 in ALIS in RAW264.7 cells treated with LPS for 3-5 h12. Figure 3A shows the raw data obtained from a bleach, control, and background ROI after the stack of images had been aligned to correct for small amounts (< ~3 µm) of image drift of the ALIS. YFP-p62 fluorescence in this ALIS at prebleach and postbleach is shown in Figure 3E and Supplementary Video 1. Figure 3B shows these data after background-correction. Figure 3C shows these data after correcting for fluorescence in the control ROI. Figure 3D shows these data normalized to the mean fluorescence of the 5 prebleach values in the bleach ROI. The degree of bleaching was sufficient in this experiment (bleach depth = 91.94). YFP-p62 fluorescence within this ALIS recovered slowly, as t1/2 = 128.27 s (2.14 min). YFP-p62 was not a very mobile protein in this experiment, as Mf = 21.97 and If = 78.03. 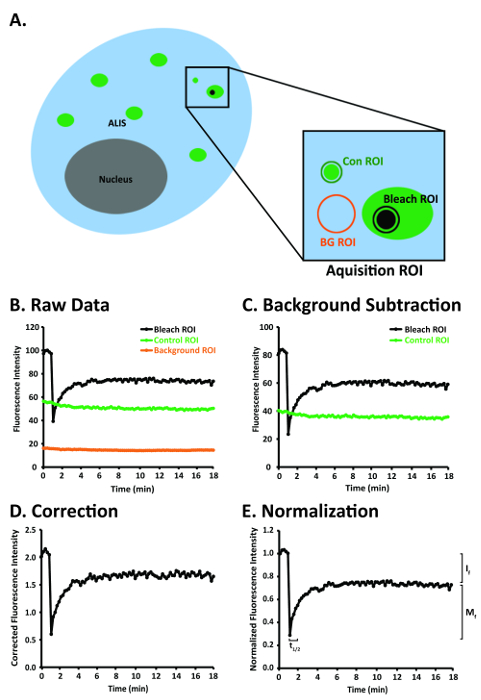 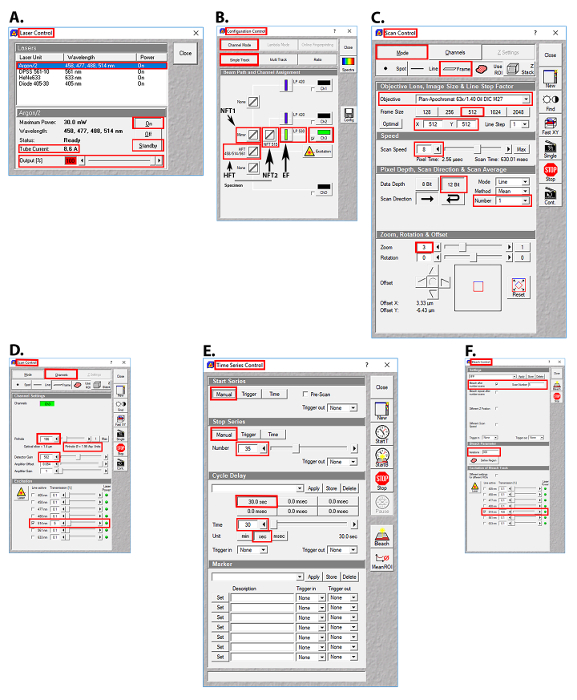 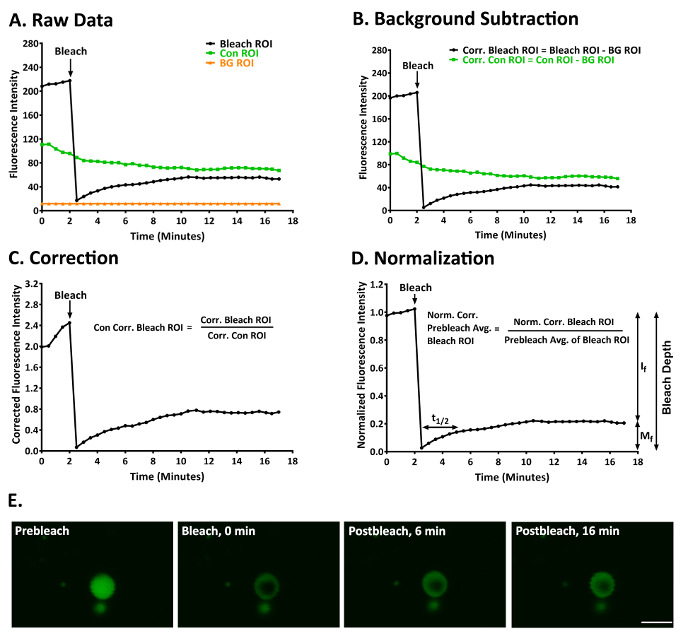 Figure 3: A representative FRAP experiment to study YFP-p62 dynamics in ALIS in RAW264.7 cells. (A) Raw fluorescence intensity data for a bleach, control, and background ROI. (B) The data given in panel A after the bleach and control ROI had been corrected for fluorescence in the background ROI. (C) The data given in panels A and B after normalizing the fluorescence intensity in the bleach ROI to account for fluorescence in the background-corrected control ROI. (D) The data given in panels A-C after normalizing the fluorescence intensity in the normalized and background-corrected bleach ROI to the average of the first 5 prebleach values in the bleach ROI. Mf = 21.97, If = 78.03, t1/2 = 128.27 s (2.14 min), and bleach depth = 91.94. (E) An image of an ALIS at prebleach (1.5 min) and postbleach (0, 6, and 16 min). Scale bar = 5 µm and is valid for all panels. Abbreviations: Con = control; BG = background; Corr. = corrected; Norm. = normalized; Avg. = average. This figure was modified from Cabe et al.12 Please click here to view a larger version of this figure.

We provide a comprehensive, practical, and simple step-by-step protocol for FRAP experiments with live cells. Herein, the protocol was used to measure the mobility of YFP-p62 in ALIS in RAW264.7 macrophages, but it can be applied to many of the laser scanning confocal microscope systems and genetically encoded fluorescent proteins that are now available. For any microscopy system, pilot experiments are critical for determining the optimal FRAP parameters, including acquisition, bleach, and control ROI sizes, laser intensity for photobleaching, and prebleach and postbleach image acquisition. It is reasonable to expect the optimal FRAP parameters to differ for each genetically encoded fluorescent protein and cell line.

Important factors to consider when conducting a FRAP experiment include (a) achieving suitable bleach depth, (b) the use of a brief bleaching step, (c) allowing sufficient time postbleach to observe the full recovery function, (d) photobleaching efficiency, (e) cytotoxicity with repeated FRAP, and (f) the inclusion of a control for fluorescence loss due to repeated imaging. We recommend that bleach depth, which can be calculated according to the equation provided in section 3.3.1, be ≥9013. When bleach depth is <90, the degree of postbleach fluorescence recovery will be underestimated, and the values of If, Mf, and t1/2 will be incorrect. Although the duration and intensity of the bleach-inducing laser pulses may vary between FRAP experiments, it is important that the photobleaching step be brief and substantially faster than the fluorescence recovery function. If it is not, then a significant amount of fluorescence recovery could occur during the bleaching step. With a long bleach time, fluorescence recovery during the bleaching step would not be measured, and it would lead to incorrect measurements of If, Mf, and t1/2. In addition, to obtain correct values for If, Mf, and t1/2, the acquisition ROI should be observed postbleach until the fluorescence level in the bleach ROI has reached a plateau. For example, in our FRAP experiments, there was no difference between the If, Mf, and t1/2 values when we observed YFP-p62 fluorescence in the bleach ROI for 32.2 min postbleach versus when we observed YFP-p62 in the bleach ROI for 15.1 min postbleach; thus, we concluded that the recovery function reached a plateau at 15.1 min postbleach12. With regard to photobleaching efficiency, photobleaching increases with the square of the optical zoom factor14. Thus, the use of high optical zoom lenses is favorable for rapid photobleaching but can result in undesirable photobleaching during acquisition; the latter can be accounted for by imaging a control ROI. Repeated photobleaching is to be avoided as it can lead to the generation of cytotoxic reactive oxygen species (ROS). However, the degree of ROS generation due to exposure to a high-intensity laser is lower for genetically encoded fluorescent proteins than for chemical fluorophores (e.g., fluorescent antibodies)15, and the ROS generated are more likely to react within the genetically encoded fluorescent protein than with other molecules in the cell4. In addition to the increased probability of generating cytotoxic ROS, repeated photobleaching is to be avoided as it is difficult to control. Finally, although low laser transmission is used to acquire all non-bleach images, some photobleaching will invariably occur, which must be controlled. Possible controls for this include monitoring fluorescence in a control ROI within the acquisition ROI, obtaining control images in a neighboring unbleached cell, and performing control experiments with the identical settings for those used in the photobleaching experiments but without the photobleaching event.

The authors have no conflict of interest to disclose.

We thank Dr. Seth Robia at Loyola University Chicago for his valuable comments on this manuscript. This work was supported by NIH grant 1R01NS073967-01A1 to Joanna C. Bakowska. 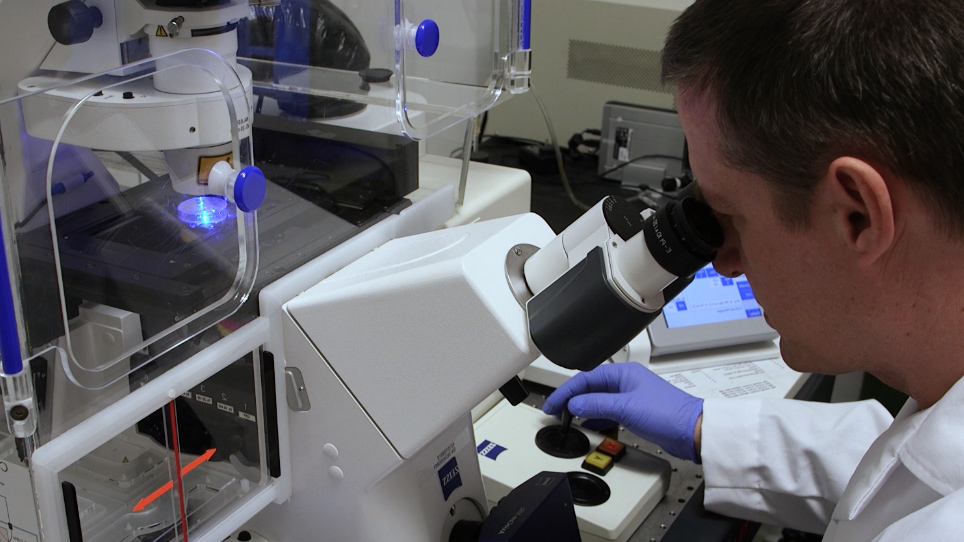