Here, we present a protocol to genetically edit CAR-T cells via a CRISPR/Cas9 system.

Chimeric antigen receptor T (CAR-T) cell therapy is a cutting edge and potentially revolutionary new treatment option for cancer. However, there are significant limitations to its widespread use in the treatment of cancer. These limitations include the development of unique toxicities such as cytokine release syndrome (CRS) and neurotoxicity (NT) and limited expansion, effector functions, and anti-tumor activity in solid tumors. One strategy to enhance CAR-T efficacy and/or control toxicities of CAR-T cells is to edit the genome of the CAR-T cells themselves during CAR-T cell manufacturing. Here, we describe the use of CRISPR/Cas9 gene editing in CAR-T cells via transduction with a lentiviral construct containing a guide RNA to granulocyte macrophage colony-stimulating factor (GM-CSF) and Cas9. As an example, we describe CRISPR/Cas9 mediated knockout of GM-CSF. We have shown that these GM-CSFk/o CAR-T cells effectively produce less GM-CSF while maintaining critical T cell function and result in enhanced anti-tumor activity in vivo compared to wild type CAR-T cells.

Chimeric antigen receptor T (CAR-T) cell therapy exhibits great promise in the treatment of cancer.1,2 Two CAR-T cell therapies targeting CD19 (CART19) were recently approved in the United Stated and in Europe for the use in B cell malignancies after demonstrating striking results in multicenter clinical trials.3,4,5 Barriers to more widespread use of CAR-T cells are limited activity in solid tumors and associated toxicities including cytokine release syndrome (CRS) and neurotoxicity (NT).3,5,6,7,8,9 To enhance the therapeutic index of CAR-T cell therapy, genome engineering tools such as zinc finger nucleases, TALENs, and CRISPR are employed to further modify CAR-T cells in an attempt to generate less toxic or more effective CAR-T cells.10,11

In this article, we describe a method to generate CRISPR/Cas9 edited CAR-T cells. The specific goal of this method is to genetically modify CAR-T cells during CAR-T cell manufacturing via CRISPR/Cas9 to generate less toxic or more effective CAR-T cells. The rationale for developing this methodology is built on lessons learned from clinical experience of CAR-T cell therapy, which indicates an urgent need for novel strategies to increase the therapeutic window of CAR-T cell therapy and to extend the application into other tumors and is supported by the recent advances in synthetic biology allowing multiple modifications of CAR-T cells that have started to enter the clinic. While several genome engineering tools are being developed and applied in different settings, such as zinc finger nucleases, TALENs, and CRISPR, our methodology describes CRISPR/Cas9 modification of CAR-T cells.10,11 CRISPR/Cas9 is an RNA-based bacterial defense mechanism that is designed to eliminate foreign DNA. CRISPR relies on endonucleases to cleave a target sequence identified through a guide RNA (gRNA). CRISPR editing of CAR-T cells offers several advantages over other genome engineering tools. These include precision of the gRNA sequence, simplicity to design a gRNA targeting the gene of interest, high gene editing efficiency, and the ability to target multiple genes since multiple gRNAs can be used at the same time. 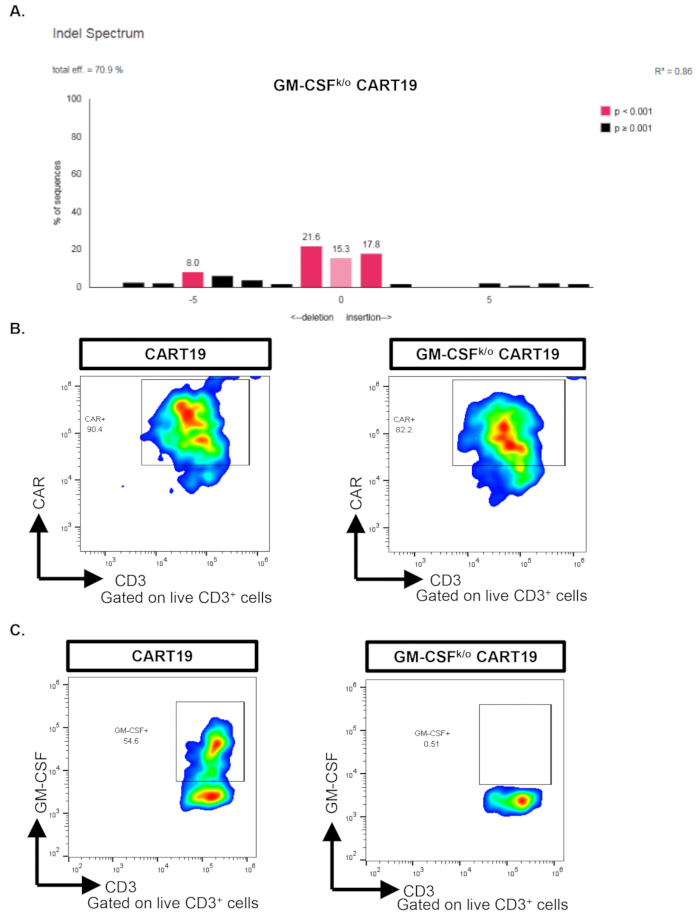 In this report, we describe a methodology to utilize CRISPR/Cas9 technology to induce secondary modifications in CAR-T cells. Specifically, this is demonstrated using lentiviral transduction with a viral vector that contains gRNA targeting the gene of interest and Cas9 to generate GM-CSFk/o CART19 cells. We had previously shown that GM-CSF neutralization ameliorates CRS and NT in a xenograft model.12 As previously described, GM-CSFk/o CAR-T cells allow for the inhibition of GM-CSF during the manufacturing process, effectively reduce production of GM-CSF while maintaining other critical T cell functions, and result in enhanced anti-tumor activity in vivo compared to wildtype CAR-T cells.12

Since permanent integration of Cas9 in the genome could be associated with unwanted effects when translated to a clinically viable product, we propose this specific methodology as a way to generate research grade CRISPR/Cas9 modified CART19 for proof of concept experiments.

While CAR-T cells hold promise in cancer therapy,1,2 their efficacy can continue to be enhanced and their associated toxicities better controlled. CRISPR/Cas9 technology provides a strategy to directly target the genome of CAR-T cells to engineer solutions to current clinical shortcomings. In this article, we describe the generation of GM-CSFk/o CART19 cells.

GM-CSFk/o CAR-T cells were generated by transduction with a lentiviral vector for the CAR-T cell plasmid and a lentivirus construct containing a guide RNA to GM-CSF and Cas9. To generate the GM-CSFk/o, a third generation lentivirus construct (lentiCRISPRv2) containing Cas9 and a reported high efficiency guide RNA (gRNA) targeting exon 3 of human GM-CSF (CSF2)14 under the control of a U6 promoter was utilized. Particular care should be taken during the transduction steps of the procedure as these are the most critical to development of the modified CAR-T cells. Knockout efficiency can be verified and assessed via tracking of indels by decomposition (TIDE) sequences. Functional activity of CAR-T cells is investigated through the antigen specific stimulation of the CAR construct with CD19+ target cells, followed by measurement of different T cell functions, including the production of GM-CSF.12 Of note, staining for CAR expression with a goat anti-mouse antibody should occur before other antibody staining with two washes occurring before surface staining due to the single chain variable region fragment of the CART19 being of mouse origin. This is a point of emphasis in trouble shooting if good CAR expression is not initially observed.

These modified CAR-T cells can be used in in vitro studies and in vivo xenograft models for proof of concept experiments. An advantage of this technique is that CAR-T cell production and genetic manipulation can both occur in one step with good efficiency compared to other techniques.10,11 While dual lentiviral transduction is a convenient and effective method to generate research grade GM-CSFk/o CART19 cells, the DNA is incorporated into the genome and prolonged Cas9 expression may destabilize the genome and increase the risk of off-target effects. A limitation of this technique is that good-manufacturing practice grade knockouts would require modification of the technique to a ribonucleoprotein CRISPR/Cas9 system as this methodology does not result in permanent incorporation of Cas9 into the genome and reduces the potential for off-target effects. The methodology described in the protocol here can potentially be applied to a variety of genes to genetically modify CAR-T cells via CRISPR/Cas9 to help generate less toxic or more effective CAR-T cells.

SSK is an inventor on patents in the field of CAR T-cell therapy that are licensed to Novartis (under an agreement between Mayo Clinic, University of Pennsylvania, and Novartis). These studies were funded in part by a grant from Humanigen (SSK). RMS, MJC, RS, and SSK are inventors on patents related to this work. The laboratory (SSK) receives funding from Tolero, Humanigen, Kite, Lentigen, Morphosys, and Actinium. 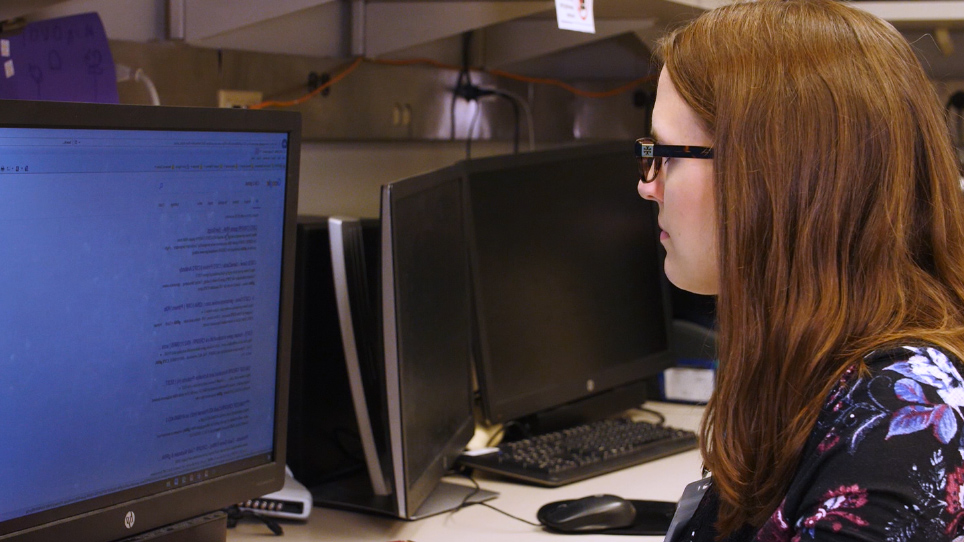