An effective enzymatic method for isolation of primary porcine aortic endothelial cells (pAECs) from miniature pigs is described. The isolated primary pAECs can be used to investigate the immune and coagulation response in xenotransplantation.

Xenotransplantation is a promising way to resolve the shortage of human organs for patients with end-stage organ failure, and the pig is considered as a suitable organ source. Immune rejection and coagulation are two major hurdles for the success of xenotransplantation. Vascular endothelial cell (EC) injury and dysfunction are important for the development of the inflammation and coagulation responses in xenotransplantation. Thus, isolation of porcine aortic endothelial cells (pAECs) is necessary for investigating the immune rejection and coagulation responses. Here, we have developed a simple enzymatic approach for the isolation, characterization, and expansion of highly purified pAECs from miniature pigs. First, the miniature pig was anaesthetized with ketamine, and a length of aorta was excised. Second, the endothelial surface of aorta was exposed to 0.005% collagenase IV digestive solution for 15 min. Third, the endothelial surface of the aorta was scraped in only one direction with a cell scraper (<10 times), and was not compressed during the process of scraping. Finally, the isolated pAECs of Day 3, and after passage 1 and passage 2, were identified by flow cytometry with an anti-CD31 antibody. The percentages of CD31-positive cells were 97.4% ± 1.2%, 94.4% ± 1.1%, and 92.4% ± 1.7% (mean ± SD), respectively. The concentration of Collagenase IV, the digestive time, the direction, and frequency and intensity of scraping are critical for decreasing fibroblast contamination and obtaining high-purity and a large number of ECs. In conclusion, our enzymatic method is a highly-effctive method for isolating ECs from the miniature pig aorta, and the cells can be expanded in vitro to investigate the immune and coagulation responses in xenotransplantation.

The shortage of available organs for transplantation is an outstanding problem world-wide1. According to the Red Cross Society of China, only a small number of patients with end-stage organ failure received a suitable organ in China in 2018.

Xenotransplantation is a promising way to resolve the problem of organ shortage. Pig organs are considered to be the most suitable organs for humans because of anatomic and physiologic similarities2,3. The failure of a pig xenograft is largely related to the primate immune rejection and coagulation responses. Porcine endothelial cells (ECs) are critical since these cells are the first to interact with the primate immune system, which includes antibody, complement, cytokines, and immune cells (e.g., T cells, B cells, and macrophages)4,5. Porcine ECs play a vital role in pig organ and islet xenotransplantation6,7. Thus, ECs are important cells for investigating the rejection and coagulation responses to a pig graft. Isolation of high-quality porcine ECs is required for xenotransplantation research.

In attempts to isolate ECs from different organs (e.g., heart, kidney, liver and aorta), several protocols have been reported in a xenotransplant setting8,9,10,11,12. However, keeping an ultrapure culture of isolated ECs is an outstanding problem in standard protocols. The increased concentration of the digested solution, inappropriate digestion time and scrape intensity may contribute to the increased fibroblast contamination in current studies8,10,13. Besides, the method of isolated pAECs from miniature pigs is less studied. Here, we describe an optimized enzymatic method to isolate highly-purified pAECs from miniature pigs (Wuzhishan or Bama). Several steps in the protocol have been designed to reduce fibroblast contamination and obtain high-purity ECs.

The use of animals was approved by the Ethics Review Committee of Shenzhen Second People's Hospital, in accordance with the principles of animal welfare.

1. Preparation of animals, medium, and buffers

Our method aims to provide an effective way to isolate highly-purified ECs from the aortas from miniature pigs. The process of aorta surgery is shown in Figure 1. The first step is that the whole aorta is excised from the pig. Preventing other cell or bacterial contamination is very important. Thus, do not injure other organs or tissues in case untargeted cells or bacteria contaminate the aorta, and wash the aorta with pre-cooled washing buffer 3x (Figure 1B-D). Another critical step to maintain cell viability is to minimize the period of time between obtaining the surgical specimen and the isolation procedure. 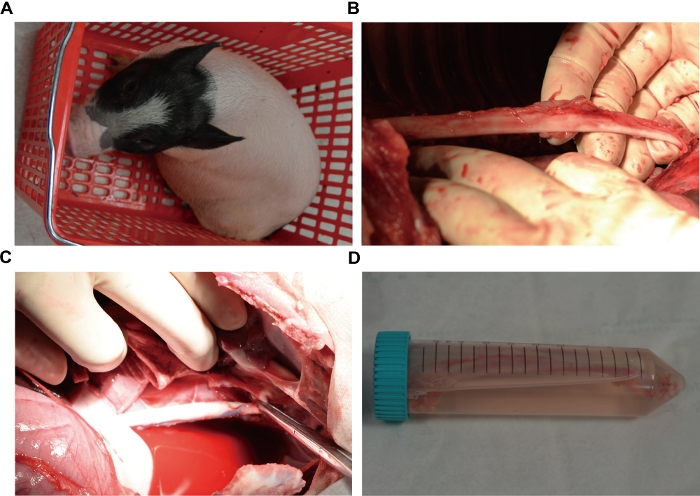 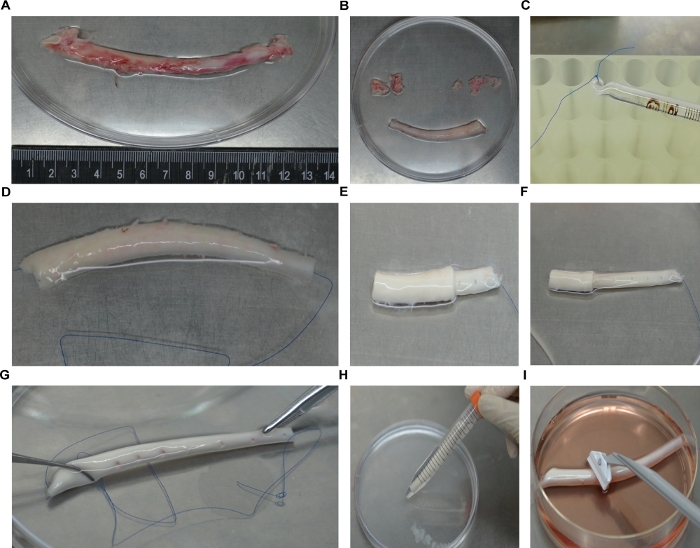 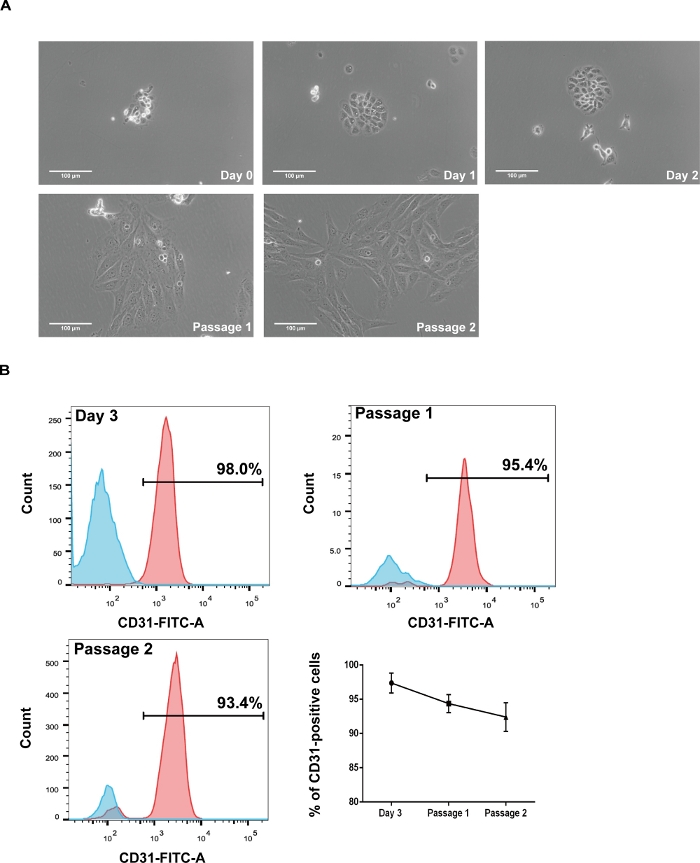 Figure 3: Identification of highly-purified pAECs by flow cytometry with an anti-CD31 monoclonal antibody.
(A) Representative images of isolated pAECs on Days 0, 1, and 2, and after passage 1 and passage 2 (200x magnification). (B) Flow cytometry analysis of pAECs (Day 3, passage 1 and 2) with anti-CD31-FITC antibody. Statistical data are presented in the bottom right. Data are representative of three independent experiments (mean ± SD). Please click here to view a larger version of this figure.

Endothelial cells are commonly used in research of vascular dysfunction, diabetes, tissue regeneration, transplantation, and cancers14,15,16,17,18. To understand and characterize the biology and function of ECs in these diseases, numerous methods to isolate the ECs of different diseased organs or tissues have been reported8,19,20,21,22,23,24. Recently, an increasing number of reports have demonstrated that porcine ECs have various functions in immune rejection and coagulation of xenotransplantation6,25. However, the isolation of highly-purified aortic endothelial cells from miniature pigs has been reported less frequently. Here, we describe a stable and easy method for the isolation of aortic endothelial cells from miniature pigs.

A higher collagenase concentration, longer digestion time, and increased frequency and intensity of scraping may increase fibroblast contamination. Fibroblasts may rapidly outgrow the CD31-positive cells, thus reducing the purity of the isolated ECs31. Comparing to existing protocols, although the protocol has been carefully designed to prevent fibroblast contamination, and the CD31-positive cells on Day 3 reached 97.4% ± 1.2% (mean ± SD), the percentage of CD31 positive cells slowly decreased following culture. If the isolated ECs are used to carry out experiments after 5 passages, we suggest that the cells should be sorted with a flow cytometry cell sorter10.

Usually, we not only isolate the endothelial cells, but also get other organs for xenotransplantation research, such as the pancreas and kidney. According to our experience, it would better to isolate the pancreas and lung first, and then perform the procurement of liver and kidney. Even after that it is not too late to isolate the heart and aorta, if the surgeon is quick enough to finish all of the isolation in less than half an hour. During the process, it is very critical to keep the surgical area sterile and cold. The cold PBS with antibiotics was poured to the target organ to clean the possible contamination and to keep the tissues in low temperature. It is also necessary to prevent the coagulation by injecting heparin after anesthesia of animal. The clot in the micro vascular vessel would induce cell death and inflammation of organs with more capillaries, such as the pancreas, the lung and the liver. We always inject heparin to the inferior vena cava and insert a catheter to the abdominal aorta to blood. This will effectively prevent coagulation related cell death. 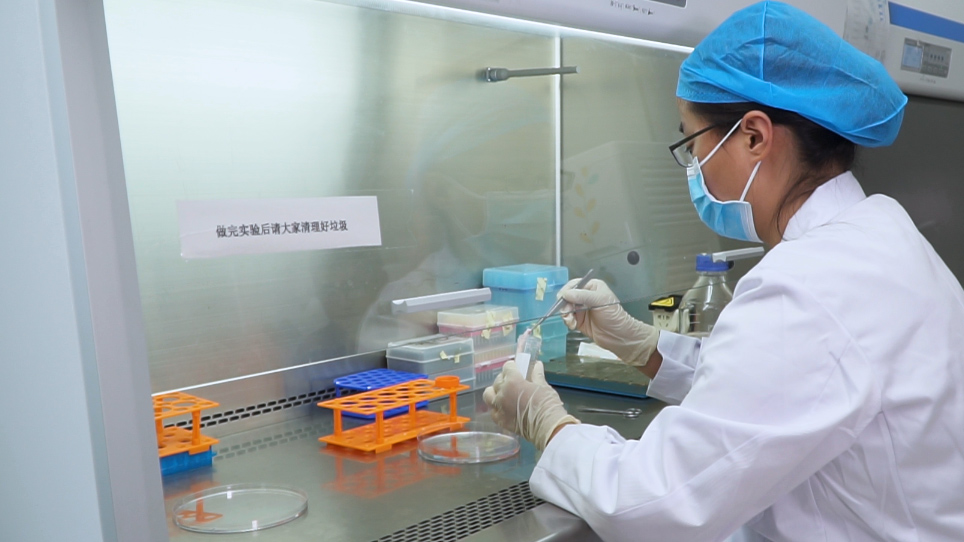