This protocol explains how to collect single neurons, microglia, and astrocytes from the central nucleus of the amygdala with high accuracy and anatomic specificity using laser capture microdissection. Additionally, we explain our use of microfluidic RT-qPCR to measure a subset of the transcriptome of these cells.

Measuring the gene expression profiles of single cells has demonstrated extensive phenotypic heterogeneity within a tissue. This complexity has complicated our understanding of the biological networks that govern tissue function. Our group and others have explored this phenomenon in many tissues and conditions1,2,3,4,5,6. These experiments not only suggest that regulation of gene expression networks underlie such heterogeneity, but also that single-cell resolution reveals a complexity in tissue function that tissue-level resolution fails to appreciate. Indeed, merely a small minority of cells may respond to a specific condition or challenge, but the impact of those cells on overall physiology may be substantial. Additionally, a system biology approach that applies multivariate methods to high dimensional datasets from multiple cell types and tissues can elucidate system-wide treatment effects.

We combine LCM and microfluidic RT-qPCR to obtain such datasets. We take this approach here in contrast to gathering single cells via fluorescence-activated cell sorting (FACS) and using RNA sequencing (RNA-seq) to measure their transcriptome. The advantage of LCM over FACS is that the exact anatomic specificity of single cells can be documented with LCM, relatively and absolutely. Further, while RNA-seq can measure more features that RT-qPCR, microfluidic RT-qPCR is less expensive and has a higher sensitivity and specificity7.

In this representative experiment, we investigated the effects of opioid dependence and naltrexone-precipitated opioid withdrawal on rat neuronal, microglia, and astrocyte gene expression in the central nucleus of the amygdala (CeA) and gut microflora abundance4. Four treatment groups were analyzed: 1) Placebo, 2) Morphine, 3) Naltrexone, and 4) Withdrawal (Figure 1). We found that opioid dependence did not substantially alter gene expression, but that opioid withdrawal induced the expression of inflammatory genes, Tnf in particular. Astrocytes were the most affected cell type. The gut microbiome was profoundly impacted by opioid withdrawal as indicated by a decrease in the Firmicutes to Bacteroides ratio, which is an established marker of gut dysbiosis8,9.

The selection of the single cells was validated both visually and molecularly. Visually, cellular morphology was viewed before cell collection. Cells collected were then viewed at the QC station and the cellular nuclei stain (DAPI) overlapped with the single cell selection marker fluorescence. Figure 2A shows representative images of a slide with hemisected rat forebrain containing the CeA. Subsequent images (Figure 2B-D) show the selection of single cells and their removal from the tissue for transcriptomic analysis. Molecularly, the cell type-specific markers demonstrated increased expression in that cell type (Figure 1C). We looked at neurons, microglia, and astrocytes and measured the expression of NeuN, Maf, and Gfap, respectively. The figures were originally published in O'Sullivan et al.4.

Further, controls can also be run in the microfluidic platform to validate the expression findings (e.g., analysis of other areas of the same tissue to demonstrate nucleus specificity). A separate tissue could also be compared to the desired sample to demonstrate primer specificity in the tissue of interest. Positive and negative control genes can also be included (e.g., genes known to either be absent from the selected tissue or expressed highly). Three or four housekeeping genes should also be included not only for data normalization purposes but also as a measure of experimental quality. These genes should demonstrate the lowest variance in expression across all samples and treatments. In this representative experiment, no alternate brain region was assayed, but housekeeping genes Ldha and Actb were used for normalization. Gapdh was used as an internal control.

Figure 3 displays some of the multivariate methods our group used to analyze our data. We found that astrocytes in the Withdrawal group were the most affected cell type. Based on these data in the context of other studies we speculate that astrocytes play a key role in inflammation in the CeA during opioid withdrawal and that this contributes to the physical and emotional symptoms that drive drug-seeking via negative reinforcement. We also show the gut microflora data (Figure 4). 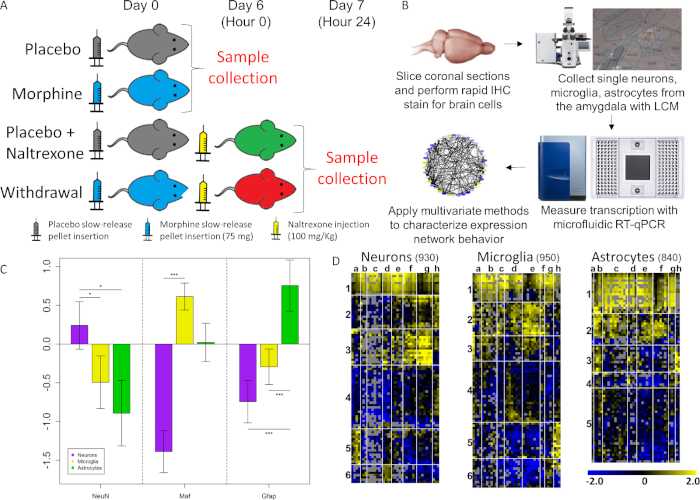 Figure 2: Laser capture microdissection images. (A) Four slices of dehydrated hemisected rat forebrain containing the CeA on a slide. Slices were placed on the slide exactly 10 µm from the previous slice. Left is anterior and right is posterior. The distance from the bregma can be estimated using a rat brain atlas and landmarks, including the optic tract and stria terminalis. (B-D) Sequence of images showing the selection of single cells in the CeA (C) and their removal from the tissue (D). Multiple LCM caps were used to select these cells. One cap is used to pick 10 cells of one cell type. Please click here to view a larger version of this figure.

Figure 3: Representative results 1. (A) A cartoon schematic of a cell displaying the genes assayed and their location. The gene symbols labeled here are a reference for panel B. (B) The colored squares represent relative gene expression (median -ΔΔCt value) for the genes represented in panel A. The location of the squares represents the cellular localization or function of the corresponding protein. The panels display the relative gene expression represented by color across treatments and cell types. Yellow = high expression; blue = low expression; white = neutral expression. The figure is modified from O'Sullivan et al.4. Please click here to view a larger version of this figure. 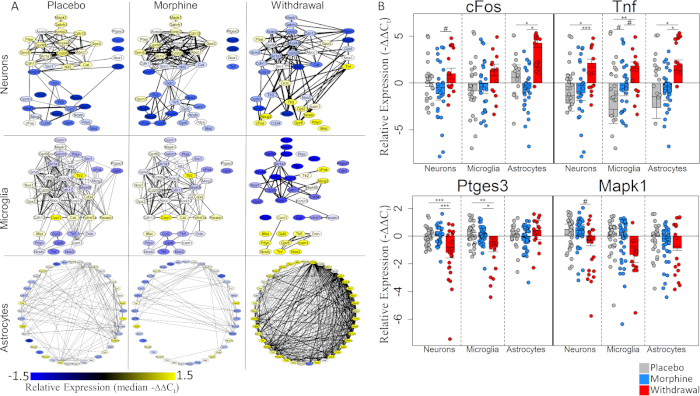 Figure 4: Representative results 2. (A) Gene correlation networks. Pearson correlation was performed on the -ΔΔCt values within a treatment and cell type. The nodes denote the genes and their color signifies the relative expression levels (the median -ΔΔCt value for each gene). The edges denote expression correlations and the thickness signifies the strength of the expression correlation (ρ). Correlations with a q-value <0.001 are displayed. Black edges = positive correlations; green edges = negative correlations. (B) Bar plots of select genes demonstrating significant differential gene expression. The statistics were calculated using nested ANOVA #p < 0.1, *p < 0.05, **p < 0.01, ***p < 0.0001 (n = 4 animals for all treatments). The figure is modified from O'Sullivan et al.4. Please click here to view a larger version of this figure. 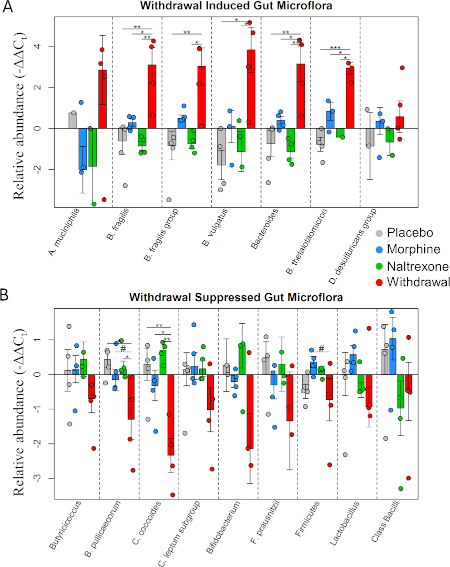 Single-cell biology has demonstrated the heterogeneity of cellular phenotypes and robustness of tissue function. These findings have provided insight into the organization of biological systems at both macro and micro scales. Here, we describe the combination of two methods, LCM and microfluidic qPCR, to obtain single-cell transcriptome measures that provide anatomic specificity and transcriptional accuracy at a relatively low cost (Figure 1). Our group takes a systems biology approach and often measures multiple tissues in the same animal. We find these methods to be both flexible and fruitful in determining how biological systems respond to various challenges at the transcriptional level. Additionally, we use these methods in the anatomic mapping of cellular phenotypes in baseline conditions.

We provide data and modified figures from a recent publication exploring how the CeA responds to opioid dependence and withdrawal4. In this example, we used the same microfluidic qPCR platform to measure the relative abundance of the gut microflora. The methods and workflow are summarized in Figure 1 and were originally published in O'Sullivan et al.4. Major findings from high-throughput microfluidic RT-qPCR can be subsequently validated by protein measures such as Western blot or immunofluorescence4.

A major challenge of this systems biology approach is determining specific causal biological mechanisms. Fuzzy logic is a validated solution that we have employed with success to infer agents in gene regulatory network behavior2. Animal model manipulation may also be employed to provide insight into systemic mechanisms. For example, the same protocol provided herein with the addition of a rat cohort with a gastric vagotomy will yield data that provide insight into the flow of information via the vagus nerve. 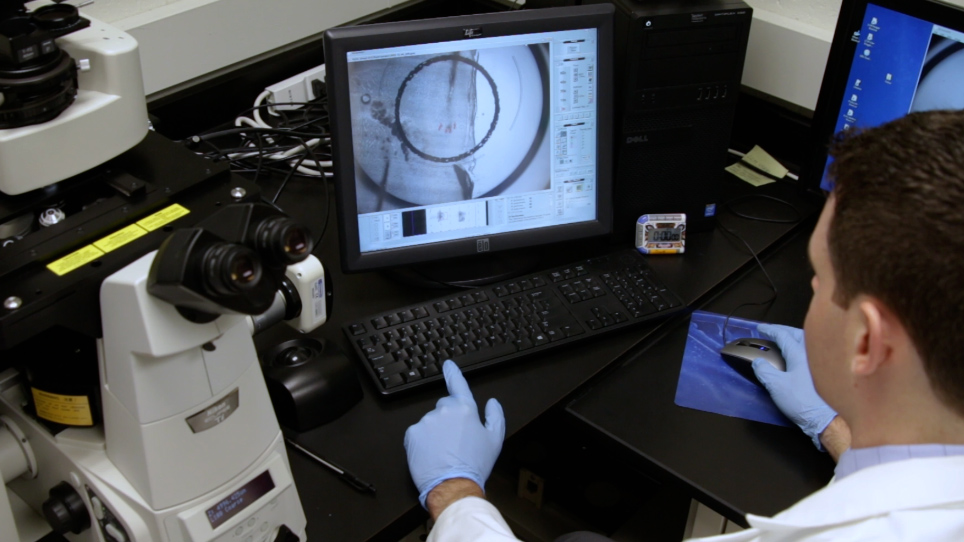