We present a murine model of brain death induction in order to evaluate the influence of its pathophysiological effects on organs as well as on consecutive grafts in the context of solid organ transplantation.

While both living donation and donation after circulatory death provide alternative opportunities for organ transplantation, donation after donor brain death (BD) still represents the major source for solid transplants. Unfortunately, the irreversible loss of brain function is known to induce multiple pathophysiological changes, including hemodynamic as well as hormonal modifications, finally leading to a systemic inflammatory response. Models that allow a systematic investigation of these effects in vivo are scarce. We present a murine model of BD induction, which could aid investigations into the devastating effects of BD on allograft quality. After implementing intra-arterial blood pressure measurement via the common carotid artery and reliable ventilation via a tracheostomy, BD is induced by steadily increasing intracranial pressure using a balloon catheter. Four hours after BD induction, organs may be harvested for analysis or for further transplantation procedures. Our strategy enables the comprehensive analysis of donor BD in a murine model, therefore allowing an in-depth understanding of BD-related effects in solid organ transplantation and potentially paving the way to optimized organ preconditioning.

Transplantation is currently the only curative treatment for end-stage organ failure. Until now, brain death (BD) patients have been the main source for organ donations, although living donation and donation after circulatory death are valuable alternatives1. BD is defined by an irreversible coma (with a known cause), the absence of brain stem reflexes and apnea2. Unfortunately, BD organs demonstrate inferior results in long-term graft survival independent of human leukocyte antigen (HLA)-mismatch and cold ischemic time3. Meanwhile, intensive research on this antigen-independent risk factor has been performed resulting in three main aspects of pathophysiological changes mediated as a consequence of BD: hemodynamic, hormonal, and inflammatory4.

To date, experimental BD models in rodents have been mostly performed using rats. In order to gain greater insight into the immunological consequences on solid organs following BD, we aimed to establish a murine model of BD, as currently only mouse models allow for comprehensive investigations into genetic or immunological factors. In this context, the mouse system provides a larger variety of analytical tools.

The principle of BD induction as described here is based on an increase in intracranial pressure induced by the inflation of a balloon catheter inserted under the skull. Increased intracranial pressure mimics the physiological mechanism of BD by blocking the perfusion of the cerebrum, cerebellum, and brain stem5,6. To guarantee sufficient perfusion of peripheral organs, blood pressure measurement is obligatory during the procedure. The catheter used for this purpose at the same time serves for saline administration in order to stabilize the blood pressure by fluid substitution. As BD is accompanied by cessation of spontaneous breathing, sufficient ventilation must be ensured. An electric blanket maintains physiological core body temperature.

In summary, this model will enable in-depth studies into the influence of BD-induced injury, on leukocyte migration7, compliment activation8, ischemic reperfusion injury9, and other factors.

The murine BD model was successfully performed more than 100 times with a success rate of over 90%. Additionally, post interventional organ transplantation of heart and kidney has been safely performed7.

BD induces a variety of pathophysiological changes that may be further investigated using this model. As shown in Figure 1, the blood pressure shows an initial hypertensive peak followed by a prolonged hypotensive phase. To avoid detrimental physiological effects of hypotension, mice with a prolonged insufficient blood pressure (MAP < 50 mmHg for more than 30 min) were excluded.

Another well-established observation is that BD induction leads to the activation of the immune system. After 4 h of BD duration organ-specific upregulation of immune markers at the mRNA level (Figure 2) as well as immune cell migration was observed7. 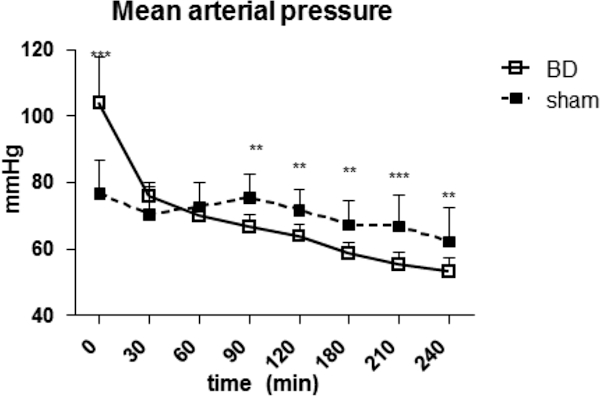 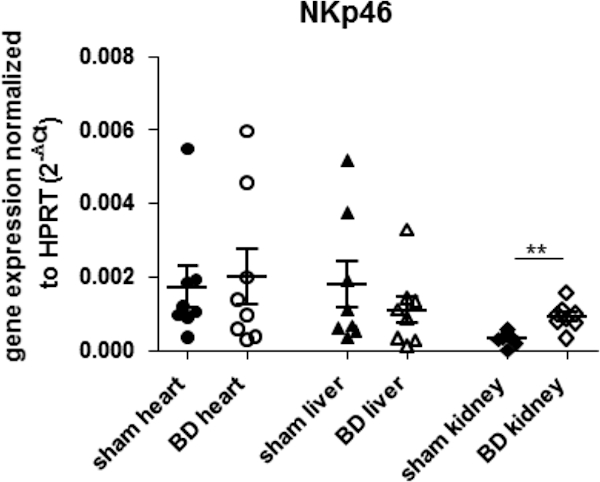 Figure 2: BD induction activates the immune system and causes direct organ damage prior to transplantation. We show representative results of the natural cytotoxicity triggering receptor 1 (NCR1 also NK-p46), which increases in kidneys as a consequence of BD at the mRNA level. No changes were observed in livers or hearts. Data are presented as mean ± SE of n = 7−8 animals/group. Statistically significant differences between BD and sham were tested using the Mann-Whitney U-test; **p = 0.0037. Please click here to view a larger version of this figure.

BD, a risk factor for allograft quality in multi-organ donors, entails a plethora of pathophysiological changes, which can only be sufficiently assessed using in vivo models. Hemodynamic changes, cytokine storm, hormonal changes and their ultimate impact on organ graft quality and survival cannot be analyzed in vitro4. The majority of basic transplantation as well as immunological research is dependent on sophisticated diagnostic tools, which are widely available only in mice models. Mice models have already led to a variety of new insights in BD-related research7,8,9.

Whereas in the 20th century the first models for BD research were developed in baboons, dogs and pigs11,12, it was not until 1996 when the first rat model was described13. It took a further 14 years until a murine model of BD was first published by the Vienna group in 20106. Although each individual step is not challenging for a trained microsurgeon, the model described here remains fragile and may take some weeks to establish.

Critical steps of this protocol are as follows. Use sterile disposable items (especially the arterial catheter and connecting tubes) to avoid unwanted immune stimulation. Avoid any blood loss as hypotensive phase may become uncontrollable. Use small cannulas for blood pressure measurement or reduce the lumen to avoid blood reflux. Fix the ventilation tube as well as the arterial cannula to avoid dislocation when turning the mouse or during seizure activity. The borehole must not be sharp-edged and should not be too large. The balloon catheter should be in contact the borehole. Otherwise brain tissue may protrude and hinder the intended elevation in intra-cranial pressure. During the BD-period, administer intravenous fluid steadily. If mice become hypotensive too early in the process (MAP < 50 mmHg after 2−3 h), additional fluid resuscitation is unlikely to provide sustained maintenance of blood pressure.

Most problems occurred during BD induction via the balloon catheter itself or became obvious over the course of the BD period. The common endpoint of all inaccuracies will be hypotension despite fluid administration. Depending on the blood pressure stability, BD-duration can be prolonged or shortened. In the literature, varying periods ranging from 3−6 h have been implemented6,7,8. The success of BD induction can also vary between different mouse strains. Although anatomical variants between mice strains should be limited, we were not able to establish the same model in BALB/c mice. Although the effort was limited to only few mice and no other strains were tested, we recommend the use of C57BL/6, which has been used in most previous research8,9. The authors have no satisfactory explanation why the model did not work in BALB/c strain.   Only one publication has so far demonstrated a BD model using large (35 g) female OF-1 mice6.

In summary, the mouse model described here represents a valuable tool for studying a multitude of pathophysiological changes caused by BD. Though challenging, the model can be optimized within a reasonable timeframe and performed in a standardized manner with a high success rate. 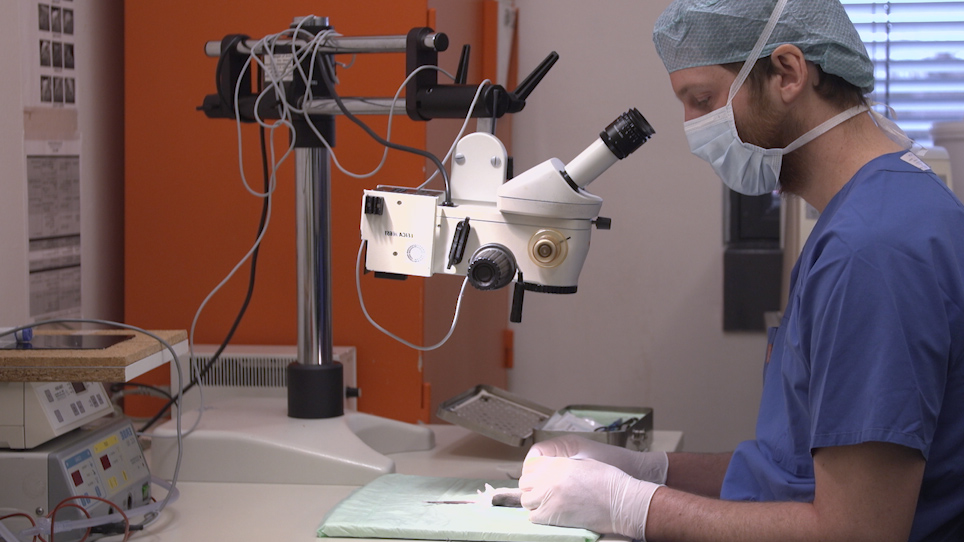