Due to their renowned regenerative capacity, adult zebrafish are a premier vertebrate model to interrogate mechanisms of innate spinal cord regeneration. Following complete transection of their spinal cord, zebrafish extend glial and axonal bridges across severed tissue, regenerate neurons proximal to the lesion, and regain their swim capacities within 8 weeks of injury. Recovery of swim function is thus a central readout for functional spinal cord repair. Here, we describe a set of behavioral assays to quantify zebrafish motor capacity inside an enclosed swim tunnel. The goal of these methods is to provide quantifiable measurements of swim endurance and swim behavior in adult zebrafish. For swim endurance, zebrafish are subjected to a constantly increasing water current velocity until exhaustion, and time at exhaustion is reported. For swim behavior assessment, zebrafish are subjected to low current velocities and swim videos are captured with a dorsal view of the fish. Percent activity, burst frequency, and time spent against the water current provide quantifiable readouts of swim behavior. We quantified swim endurance and swim behavior in wild-type zebrafish before injury and after spinal cord transection. We found that zebrafish lose swim function after spinal cord transection and gradually regain that capacity between 2 and 6 weeks post-injury. The methods described in this study could be applied to neurobehavioral, musculoskeletal, skeletal muscle regeneration, and neural regeneration studies in adult zebrafish.

Adult zebrafish are eminently used to investigate mechanisms of neuromuscular and musculoskeletal development and disease modeling1,2,3. Zebrafish are capable of efficient, spontaneous repair of multiple tissues, including the brain, spinal cord, and skeletal muscle4,5,6,7. The remarkable capacity to regenerate neuromuscular tissues and model diseases is attracting a growing scientific community into adult zebrafish research1,2,3. However, while assays of locomotion and swim behavior are available and standardized for larval zebrafish, there is a growing need to develop analogous protocols in adult fish8,9,10,11. The goal of this study is to describe protocols to quantify swim endurance and swim behavior in adult zebrafish. We present these protocols in the context of spinal cord regeneration research. However, the behavioral protocols described here are equally applicable to studies of neural and muscle regeneration, neuromuscular and musculoskeletal development, as well as neuromuscular and musculoskeletal disease modeling.

Adult zebrafish of the Ekkwill and AB strains were maintained at the Washington University Zebrafish Core Facility. All animal experiments were performed in compliance with IACUC institutional animal protocols.

NOTE: Experimental groups are divided into groups of 10 or fewer animals for swim endurance.

NOTE: Only up to five animals can be tracked at a time. If experimental groups are larger than five animals, multiple videos can be taken for each group, where the first video tracks five or fewer animals and the second video tracks the other five or fewer animals. For longitudinal studies that aim to track individual animals over time, fish can be individually housed and tracked across multiple time points. All scripts for tracking and analyzing are available via GitHub (see Table of Materials).

NOTE: Movie recording and analysis can be completed on separate days. 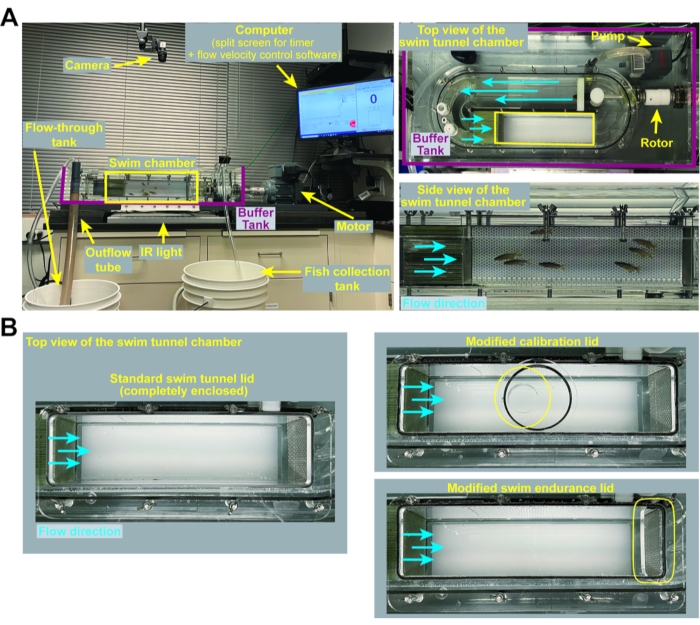 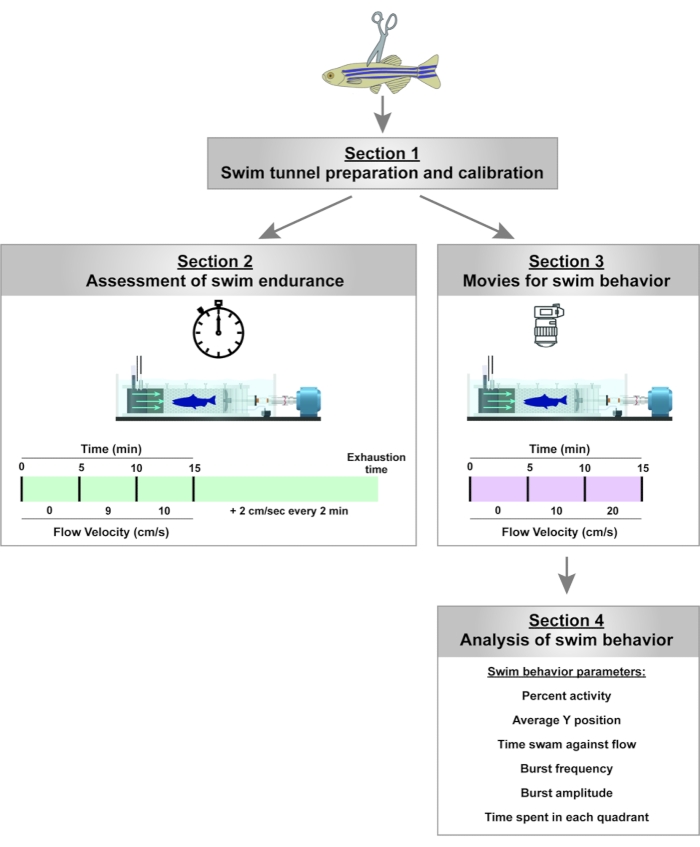 Figure 2: Experimental pipeline to assay for swim endurance and swim behavior in adult zebrafish. For swim endurance, fish swam against an increasing water current until exhaustion. For swim behavior, swim parameters are assessed in the absence of and at low current velocities. Please click here to view a larger version of this figure. 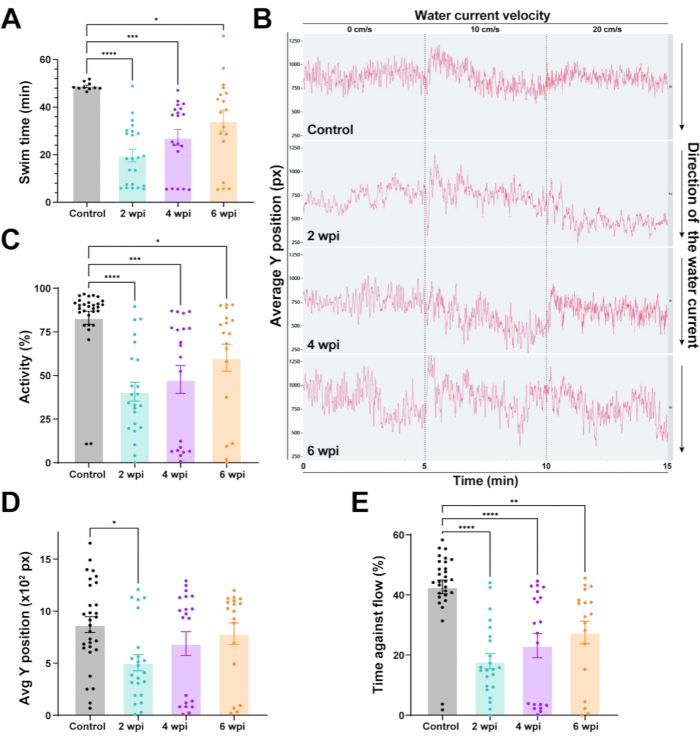 Figure 3: Functional recovery in wild-type zebrafish after spinal cord injury. (A) Motor function determined by swim endurance assays for wild-type zebrafish at baseline and 2, 4, and 6 wpi. Dots denote individual animals from two independent experiments. (B) Swim behavior assays tracked wild-type zebrafish under low water current velocities. The average Y position is shown at each time point throughout tracking (0 cm/s for 5 min, 10 cm/s for 5 min, and 20 cm/s for 5 min). (C-E) Percent activity (C), average Y position in the tunnel (D), and time swam against the flow (E) were quantified at 20 cm/s. For all quantifications, two independent experiments are shown. n = 30 in the pre-injury condition; n = 23 at 2 wpi, n = 20 at 4 wpi, n = 18 at 6 wpi. One-way ANOVA was used for statistical analyses. Error bars represent the Standard Error of the Mean (SEM). *P < 0.05; **P < 0.01; ***P < 0.001; ****P < 0.0001. Please click here to view a larger version of this figure.

Adult zebrafish are a popular vertebrate system for modeling human diseases and studying mechanisms of tissue regeneration. CRISPR/Cas9 genome editing has revolutionized reverse genetic studies for modeling disease in zebrafish; however, large-scale genetics in adult zebrafish has been hindered by biological and technical challenges, including the unavailability of adult zebrafish tissues to high-throughput phenotyping. Given the complex anatomy of adult zebrafish, prolonged histological processing is required to obtain and analyze tissue architecture. The swim endurance and swim behavior assays described in this study can be used to pre-screen for neural, muscular, or skeletal phenotypes at a medium throughput before histology. Moreover, as studies of tissue regeneration aim to improve functional tissue repair, the protocols described in this study will be widely applicable, if not essential, for studies of neural, muscular, and skeletal regeneration research.

Functional locomotion assays have been integral to our understanding of neural development and regeneration. Standard locomotor assays are widely available in vertebrate species, including rats, mice, and larval zebrafish. Mouse and rat model systems have behavioral and functional locomotion assays such as the BMS16 and BBB17,18, respectively. Similarly, a host of protocols have been described to measure locomotion, startle response, and behavior in larval zebrafish. These protocols are efficient to reveal behavioral differences among experimental groups in light and dark environments, predator evasion, and activity19,20,21. Here, we describe quantifiable, reproducible methods to measure functional recovery after spinal cord injury in adult zebrafish.

Note that this study presents several limitations. First, behavioral studies are highly dependent on genetic and environmental factors. To control for genetic variability, we used siblings to control for age, sex, and the genetic background across experimental groups22,23. To control for environmental factors, we made sure experiments are performed at the same time of the day, under controlled temperature and lighting conditions20. Second, while the swim behavior assay is less sensitive to biased analysis, the researcher running the swim endurance assay determines when a fish reaches exhaustion and proceeds to remove exhausted fish from the swim tunnel chamber without interrupting the rest of the fish cohort. Thus, our swim endurance experiments were performed by a single researcher who is blinded to experimental conditions. It is particularly important to avoid researcher-to-researcher variability for longitudinal studies of experimental groups over time. Finally, collisions between fish can complicate the tracking analysis in swim behavior assays. We thus recommend performing swim behavior assays for groups of five or fewer fish to minimize the chances of collisions between fish.

In consideration of critical steps, we note that injured fish can be fragile especially in the early days after injury. We thus recommend handling fish with extreme care. For swim endurance assays, collecting fish with the PVC tube as quickly as possible, either head or tail first, reduces the chance of secondary injuries during the collection process. For swim behavior assays, the flush pump can occasionally create waves, distorting the movies and causing analysis errors. In this case, the flush pump can be briefly turned off. However, we do not recommend turning off the flush pump for extended times to ensure water is constantly circulating between the swim tunnel chamber and the buffer tank. Monitoring movie recording allows for immediate termination and restarting of the movie if a frame has been dropped or a fish strays from the recording area. In additional considerations, while performing the tracking analysis, if the R code gives an error during file processing, the most likely problem is in the naming of the files. The program is made to function under a very specific naming strategy: Timepoint_Group_Subgroup_Stock number_Anything else (for example, 0_A_1_00001_WildtypeGroupA.avi). This naming allows for multiple time points, groups, and subgroups to be plotted and aligned together. Finally, while checkpoints have been built into the analysis script to ensure proper tracking, it is important to carefully check the analysis output. The program will automatically ask whether the fish number is correct, and prompt movies for re-analysis if the fish number is incorrect. Straight-line artifacts may appear in the Average Y position plot, indicating that an extra object has been recognized as a fish. In this instance, the best course of action is to carefully watch the movie to exclude extra artifacts that tend to appear at a higher flow speed.

We thank the Washington University Zebrafish Shared Resource for animal care. This research was supported by the NIH (R01 NS113915 to M.H.M.).