A phage display library was used to identify peptide sequences that target bone. The objective was to investigate the effect of these peptides on mesenchymal cell differentiation and to determine their effect on bone regeneration.

Two novel synthetic peptides accelerate bone formation and can be delivered using a collagen matrix. The aim of this study was to investigate the effects on bone repair in a unicortical defect model. Treatment of mesenchymal cells produced an increase in alkaline phosphatase activity, showed nodule formation by the cells, and increased the expression of genes for runx2, osterix, bone sialoprotein, and osteocalcin. A collagen sponge soaked with peptide promoted repair of bone defects, whereas the control was less effective. The results from this study demonstrated that mesenchymal cells treated with peptide in vitro differentiate towards osteogenesis, and, that peptides delivered in vivo using a collagen sponge promote the repair of unicortical defects.

1. In vivo Biopanning to Isolate Phage That Target Long Bones

Phage DNA was sequenced and Peptides with a corresponding sequence were synthesized. Peptides were synthesized with gly-gly-gly-ser-lysine linker (the linker is needed to couple fluorescent chromophores that help to track/trace the peptides).

6. In vivo Preparation of Gelfoam Composite

Bone repair is clearly a very important area of consideration in the field of musculoskeletal tissue regeneration. The peptides that target bone could have significant utility in the practice of Orthopaedic Surgery, particularly in the use of protheses that can be indwelling for years if not decades. The biomimetic properties of bone tropic factors could create a technological step forward in the field of tissue engineering, as well as for prosthetic surgery of bone. Inclusion of bone targeting factors in synthetic or natural polymers may assist specificity of cell adherence, thereby scavenging endogenous cells within tissues that are undergoing repair and regeneration. An additional goal was to establish if our unique bone targeting peptides identified by in vivo biopanning of a phage display library would bind to cells isolated from bone and bone marrow, and have the potential to modulate osteogenesis in vitro and bone regeneration in vivo.

In our experiments, we delivered the peptides into femoral defects in rats using natural and synthetic polymer matrices and bone regeneration examined by histology, biochemistry, gene expression, micro-CT and biomechanics in order to elucidate details of peptide activity on bone regeneration. Further development of this approach can lead to the discovery and development of biologically active compounds that target bone and potentiate repair through mechanisms that are well characterized biologically at the cellular and molecular levels.

The peptides were synthesized with biotin-labels in order to determine binding and localization to mesenchymal cells. Fluorescein-isothiocyanate (FITC)-labeled avidin was used to localize microscopically the binding of peptides on cells grown in vitro. The peptides bind to mesenchymal cells in culture as well as to bone and marrow in mouse rib tissue sections in vitro (Figure 1).

A mesenchymal cell (D1) was cloned from bone marrow and used to determine the osteogenic effect of peptides on cells in vitro. The cells were treated with peptides L7 and R1 to determine changes in cell morphology and gene expression. At day 4, the cells had started to aggregate, and the aggregates enlarged with time to form nodules, a cell behavior pattern similar to bone cells in culture ( Figure 2 ).

The addition of peptide L7 or R1 to the cells enhanced staining of the cultures with von Kossa. Cells were then treated with different concentrations of peptide L7 or R1 for up to 16 days in culture. It was determined that 5 nM peptide was most effective in vitro . Alkaline phosphatase activity in the cultures that were treated with peptide increased from between 2 and 3.5 fold. The fold increase depended on the concentration of peptide and the time of treatment in culture.

The treatment of in vitro cell cultures with the peptides R1 and L7 has revealed an anabolic effect related to bone formation using mesenchymal cells. An increase in the ratio of osteoprotegerin to RANKL indicates a decrease in the recruitment of the bone resorbing cells that are known as osteoclasts. Treatment of cells with the peptides also leads to an increase in the expression of genes that are associated with bone formation and diminishes the factors that inhibit osteogenesis.

To determine the quantity of bone, we exposed the slices of bone to μLtraviolet light thereby producing autofluorescence. This provides greater contrast between bone and non-bone tissues for the purpose of quantitation 2. The sections were photographed using both bright field and UV light (Figure 3) a Nikon and UV light by a Nikon digital imaging system at the same magnification (x10 objective). The resulting digital images were analyzed with Metavue imaging software (Molecular Devices). We chose a fixed, rectangular region of interest (ROI) that contained the 8 mm unicortical defect. The injury site was always represented inside this ROI by manually placing the box in the correct position on each image. The H&E-positive pixels were partially automated using the magic wand tool set to a color tolerance. This tolerance setting resulted in highlighted pixels with a range of green that corresponded precisely with the histological appearance of osseous tissue in the H&E-stained sections. The total number of H&E-positive pixels for each section was recorded. The pixel counts from individual sections were averaged for each tibial sample and the differences within and among treatment groups were calculated based on these averages. The areas for all the samples were then compared based on the amount of new cortical bone ( Figure 4 ).

The presence of bone in the sections was quantified to determine bone repair in the defects treated with gelfoam+peptide by comparison to gelfoam alone. Defects that were filled with gelfoam+R1 peptide showed the largest amount of cortical repair with a 10, 7 and 2-fold increase at 3, 5, 12 weeks respectively. The differences in cortical bone repair in the gelfoam+peptide compared with gelfoam alone were most noticeable at 3 and 5 weeks demonstrating that the peptide promotes cortical bone regeneration ( Figure 5 ).

The OPG/RANKL ratio is greater than the RANKL/OPG ratio, which suggests that the peptides may have a direct effect on osteoblasts and regulate bone resorption.

Synthetic peptides may have advantages over larger molecules such as speed of preparation, molecular stability, long shelf lives and potentially therapeutic applications. Significant progress has been made in attempts to modulate bone loss and regeneration by controlling cytokines and growth factors. These osteotropic peptides may offer attractive alternatives to existing therapies that stimulate bone anabolism and bone regeneration. 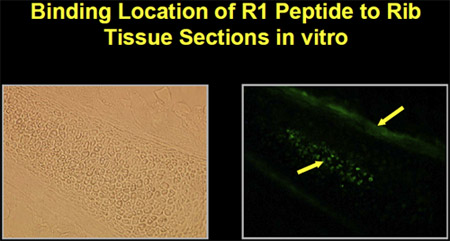 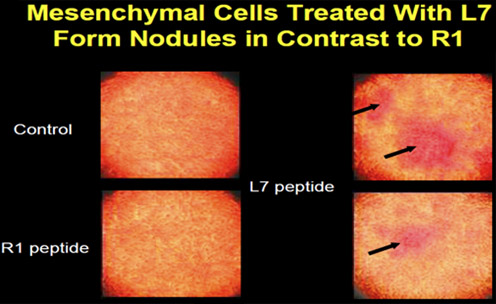 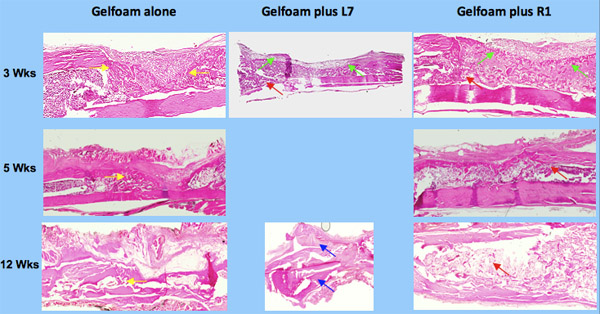 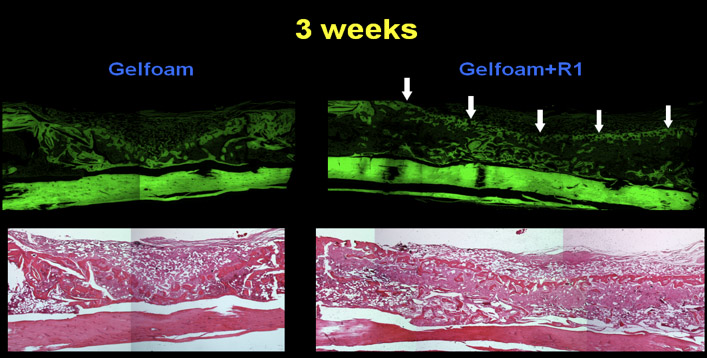 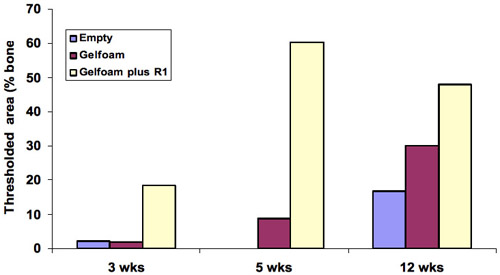 Figure 5. Quantitation of bone in the histology sections showed the largest amount of cortical repair was at 5 weeks with a 10-fold change, 7 and 2-fold at 3 and 5 weeks demonstrating that the peptide promotes cortical bone regeneration.

The production of this video was sponsored by New England Biolabs, Inc, which produces some of the reagents used in this article.