This video provides a detailed protocol for studying the pharmacological profile of human TRPA1 channels using FlexStation 3. The protocol covers details of cell preparation, dye loading and operation of the microplate reader, FlexStation 3.

The Molecular Devices' FlexStation 3 is a benchtop multi-mode microplate reader capable of automated fluorescence measurement in multi-well plates. It is ideal for medium- to high-throughput screens in academic settings. It has an integrated fluid transfer module equipped with a multi-channel pipetter and the machine reads one column at a time to monitor fluorescence changes of a variety of fluorescent reagents. For example, FlexStation 3 has been used to study the function of Ca2+-permeable ion channels and G-protein coupled receptors by measuring the changes of intracellular free Ca2+ levels. Transient receptor potential (TRP) channels are a large family of nonselective cation channels that play important roles in many physiological and pathophysiological functions. Most of the TRP channels are calcium permeable and induce calcium influx upon activation. In this video, we demonstrate the application of FlexStation 3 to study the pharmacological profile of the TRPA1 channel, a molecular sensor for numerous noxious stimuli. HEK293 cells transiently or stably expressing human TRPA1 channels, grown in 96-well plates, are loaded with a Ca2+-sensitive fluorescent dye, Fluo-4, and real-time fluorescence changes in these cells are measured before and during the application of a TRPA1 agonist using the FLEX mode of the FlexStation 3. The effect of a putative TRPA1 antagonist was also examined. Data are transferred from the SoftMax Pro software to construct concentration-response relationships of TRPA1 activators and inhibitors. 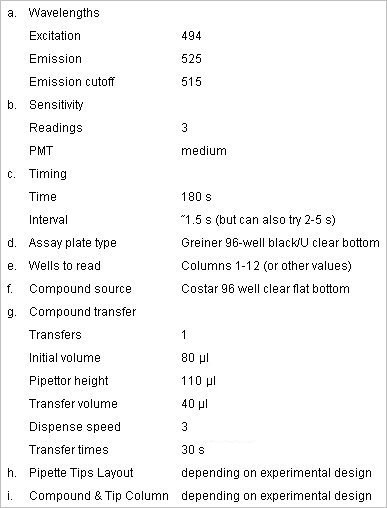 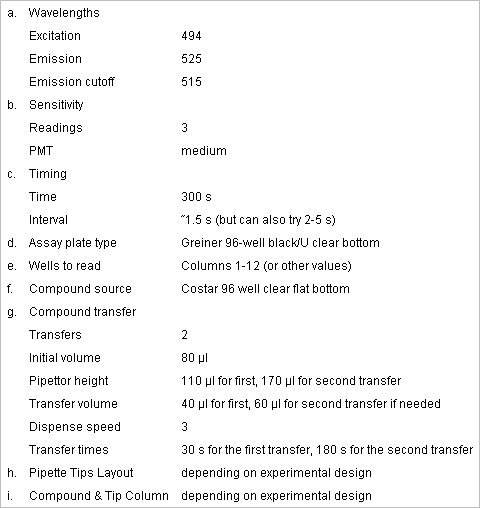 TRPA1 is a Ca2+-permeable cation channel, activation of which leads to calcium influx that can be detected by the Ca2+-sensitive dye, Fluo-4 (1-2). A HEK293-hTRPA1 stable cell line was used to study the concentration-response relationships of TRPA1 agonists and antagonists. Cells were loaded with Fluo-4 AM, placed in 80 μl of the assay buffer, and read using FlexStation 3. After recording the baseline fluorescence for 30 s, 40 μl of a serial dilution of the TRPA1 agonist, FFA, each at 3x of the desired final concentration, were added to the cells through a multi-channel pipetter included as a part of the fluidics module of FlexStation 3. The fluorescence changes were monitored for an additional 180 s. The relative Fluo-4 fluorescence changes for each well were expressed as ΔF= (F - F0), where F and F0 are fluorescence values at the time of interest and the beginning of the reading, respectively. Representative traces of the time courses to fluorescence changes in response to a series of FFA concentrations are shown in Fig. 1. Note for the last four FFA concentrations, although the maximal response levels are similar, the activation kinetics is clearly faster at the higher than at the lower FFA concentrations. Therefore, to distinguish these differences, the concentration - response relationship was constructed by measuring the initial rates (slope) of the fluorescence increase upon addition of varying concentrations of FFA (Fig. 2). The half maximal effective concentration (EC50) of FFA was determined to be 55.4 μM (n=3). To test the putative TRPA1 antagonist, compound A, we performed a similar experiment using protocol #2 (Step 2). In this case, a series of dilutions of the antagonist were added at 30 s (40 μl of 3x desired final concentrations) and the FFA was added 180 s later (60 μl at 300 μM for a final concentration of 100 μM). Compound A dose-dependently reduced the response of the TRPA1 cells to FFA with a half maximal inhibitory concentration (IC50) of 4.3 μM (n=3) (Fig. 2). 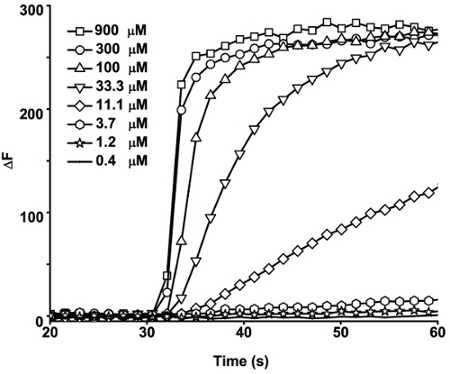 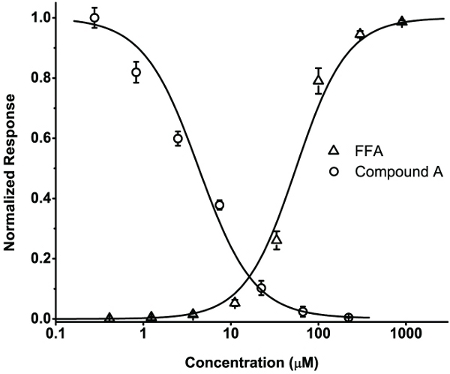 Intracellular Ca2+ plays important roles in many physiological and pathological conditions, such as neurotransmitter release (3), cardiac action potential (4), muscle cell contraction (5), cell signal transduction (6-7), and excitotoxic cell death (8). Measurement of intracellular Ca2+ levels helps to elucidate functional changes of Ca2+-permeable channels in the plasma membrane or intracellular organelles and the contribution of
Ca2+ to the above processes (9-13). The assay can also be used to investigate the function of G-protein coupled receptors, many of which, upon activation, lead to increased intracellular free Ca2+ concentrations by releasing Ca2+ from intracellular Ca2+ stores or activating other Ca2+ permeable ion channels (14-16). FlexStation 3 makes use of Ca2+ sensitive dyes, which give rise to increased fluorescence intensity, or ratiometric changes, with the increase of intracellular Ca2+ concentration. This video article demonstrates the application of FlexStation 3 in the study of Ca2+-permeable TRPA1 channels heterologously expressed in HEK293 cells. Although we have only used 96-well plates for the demonstration, users can easily choose from 96- or 384-well plate format by switching the dispensing pipetters (8- or 16-channel). This assay provides a quick medium to high throughput screening capability of agonists and/or antagonists and is applicable to many other Ca2+-permeable ion channels. However, it should be noted that intracellular calcium assay is an indirect measurement of ion channel activities. Detailed follow-up studies using patch clamp recordings to directly measure ionic current flowing across cell membrane are still needed to draw appropriate conclusions.

To obtain reliable data quality, the following precautions should be taken:

We thank Drs. John Hancock, Ray Grill, Andrew Morris and Olga Chumakova for their support. The FlexStation 3 system is part of the UTHSC Cytodynamic Imaging Facility. We also thank Drs. Ardem Patapoutian and Michael Bandell from the Scripps Research Institute and Genomics Institute of the Novartis Research Foundation (GNF) for providing the HEK293-hTRPA1 stable cell line. The research is supported in part by grants from NIH (GM081658 to MXZ) and Texas Medical Center Digestive Diseases Center (to HH) and Mission Connect/TIRR Foundation (to HH).