We describe how to use laser capture microdissection (LCM) to obtain enriched populations of hippocampal neurons or single neurons from frozen sections of the injured rat brain for subsequent gene expression analysis using quantitative real time PCR and/or whole-genome microarrays.

Long-term cognitive disability after TBI is associated with injury-induced neurodegeneration in the hippocampus-a region in the medial temporal lobe that is critical for learning, memory and executive function.1,2 Hence our studies focus on gene expression analysis of specific neuronal populations in distinct subregions of the hippocampus. The technique of laser capture microdissection (LCM), introduced in 1996 by Emmert-Buck, et al.,3 has allowed for significant advances in gene expression analysis of single cells and enriched populations of cells from heterogeneous tissues such as the mammalian brain that contains thousands of functional cell types.4 We use LCM and a well established rat model of traumatic brain injury (TBI) to investigate the molecular mechanisms that underlie the pathogenesis of TBI. Following fluid-percussion TBI, brains are removed at pre-determined times post-injury, immediately frozen on dry ice, and prepared for sectioning in a cryostat. The rat brains can be embedded in OCT and sectioned immediately, or stored several months at -80 °C before sectioning for laser capture microdissection. Additionally, we use LCM to study the effects of TBI on circadian rhythms. For this, we capture neurons from the suprachiasmatic nuclei that contain the master clock of the mammalian brain. Here, we demonstrate the use of LCM to obtain single identified neurons (injured and degenerating, Fluoro-Jade-positive, or uninjured, Fluoro-Jade-negative) and enriched populations of hippocampal neurons for subsequent gene expression analysis by real time PCR and/or whole-genome microarrays. These LCM-enabled studies have revealed that the selective vulnerability of anatomically distinct regions of the rat hippocampus are reflected in the different gene expression profiles of different populations of neurons obtained by LCM from these distinct regions. The results from our single-cell studies, where we compare the transcriptional profiles of dying and adjacent surviving hippocampal neurons, suggest the existence of a cell survival rheostat that regulates cell death and survival after TBI.

Gene expression analysis of heterogeneous tissues has always been problematic; this is particularly true in the mammalian brain, which has approximately 5,000 different cell types.4 Prior to the development of the laser capture microdissection (LCM) technique, genomic studies of the effects of TBI in vivo were based on analysis of gene expression in a mixed population of brain cells comprised, not only of different neuronal cell types, but also of supporting glial and immunomodulatory cells. The resulting complex gene expression profiles obtained from these heterogeneous tissues, and the often conflicting patterns of injury-induced cellular signals, may be one explanation for the failure in human clinical trials of therapeutic strategies proven effective in pre-clinical studies of TBI.5

To obtain a clear understanding of injury-induced gene expression in vulnerable populations of neurons from the rat hippocampus, we adopted the technique of LCM, first reported by Emmert-Buck et al.3 Subsequently, we modified and optimized this microdissection technique for efficient capture of enriched populations of neurons and single neurons for mRNA profiling using quantitative real time PCR and microarray analysis. To maintain the integrity of mRNA in frozen sections of brain tissue for genomic analysis, we modified existing protocols for fixing, staining and rapid capture of neurons from frozen rat brain sections. For identification and isolation of injured and dying hippocampal neurons, we also optimized the Fluoro-Jade staining technique for LCM. Fluoro-Jade does not distinguish between apoptotic and necrotic cell death. Thus, all types of degenerating neurons can be detected by this stain.6,7

Here, we describe the protocol used in our laboratory to obtain pools of single dying or surviving neurons as well as swaths of enriched populations of distinct neuronal cell types (i.e. CA1-CA3 neurons for gene expression analysis after TBI). The procedure for fluid percussion brain injury performed in our laboratory is described in detail in Shimamura et al.,8 and is very similar to the lateral fluid-percussion injury protocol for mice published in JoVE by Alder et al.9 Since the LCM technique has been shown to have minimal or no effect on the integrity of DNA, RNA and protein in tissues, this is an excellent tool for molecular and protein analysis of defined cell types.

2. Sectioning and Staining of Rat Brain

LCM of swaths of enriched populations of hippocampal neurons

LCM of single FJ+ neurons in the hippocampus

4. Total RNA Isolation From LCM Samples (This section will just be described in the video presentation)

In our first LCM study, we were able to show that functionally distinct subregions (CA1 and CA3) of the rat hippocampus have gene expression profiles that reflect their vulnerability to TBI.8 Figure 1A-1C shows laser capture of hippocampal pyramidal neurons (CA1-CA3), dentate gyrus neurons and SCN neurons before, and after LCM. Clean captures of pyramidal, granule or SCN neurons, respectively, are shown on the macro caps. Figure 2A-2B illustrates dying, Fluoro-Jade positive pyramidal neurons and surviving, Fluoro-Jade negative pyramidal neurons before and after LCM. The clean capture of the dying or surviving neurons is shown by viewing the captured cells on the LCM caps.

Figure 1. Laser capture microdissection of swaths of defined cell populations from the rat brain. Frozen 10 μm coronal sections of the rat brain are fixed in ethanol, stained with a nissl stain (cresyl violet) and prepared for LCM. Shown are pictures of the rat hippocampus and suprachiasmatic nucleus before and after LCM and the captured cells as visualized on the macro caps. A. Pyramidal neurons from the CA1-CA3 subfields of the rat hippocampus. B. Granule cells in the hippocampal dentate gyrus. C. Bilateral suprachiasmatic nuclei located on either side of the third ventricle and located above the optic chiasma. Click here to view larger figure. 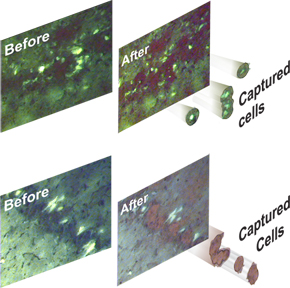 This LCM technique has enabled us to make significant advances in understanding the molecular mechanisms of TBI.8,10,11,12,13 We were the first investigators to utilize this technique to demonstrate that distinct subregions of the rat hippocampus have gene expression profiles that correlate with their selective vulnerability to injury. Our studies showed that we could quantify gene expression, by qPCR, from as few as 10 laser captured cells and that we could perform genome-wide microarray analysis from as few as 600 captured cells. LCM would be a valuable tool in similar studies of other brain regions that are known to be implicated in diverse neurological and neuropsychiatric disorders. For example, studies using LCM have shed light into the pathogenesis of Parkinson's disease in dopamine neurons of the substantia nigra,14 and aided genome-wide profiling studies of the nucleus accumbens, which is involved in reward circuits implicated in substance abuse disorders.15

Neuronal heterogeneity is reflected at the genome level16 and may contribute to the lack of success of experimental treatments for TBI in clinical trials. Thus, our goal is to utilize this technique to investigate the critical elements influencing neuronal survival after TBI. Our recent genome-wide profiling study of dying and adjacent surviving hippocampal neurons after TBI suggested that a cellular rheostat that reflects the ratio of the expression levels of cell survival to cell death genes regulates cell fate after TBI. These ongoing studies will contribute to the design and development of pharmacotherapeutic strategies that can positively influence the cell survival rheostat. Furthermore, we currently use LCM to track and monitor the effects of potential therapeutic drug treatments in hippocampal neurons after TBI. Thus, our studies demonstrate that given careful RNase-free handling techniques and some modifications of existing protocols, it is possible to obtain high quality RNA samples from LCM for accurate quantitative gene expression analysis.

However there are a few pitfalls associated with LCM techniques. For example, collecting only neuronal cells without any microglia contamination can be almost impossible. In the pyramidal cell layer of the hippocampus it has been estimated that 95% of the cells are neurons with 90% of this population to be pyramidal cells and 10% interneurons, leaving a small percentage of glial and other cell types.8,17,18 In our studies we use Fluoro-jade a fluorescent dye that specifically labels only injured neurons in brain tissue. A different stain that is a marker for GFAP would be necessary to stain microglia.19 Collecting only the Fluoro-jade stained single neuronal bodies ensures a more homogenous population of neurons. Another common problem that may require troubleshooting is that a circle is not defined when the laser is fired. If this occurs, it is necessary to check the laser settings and adjust the power and duration as necessary. Also it is important to ensure that the cap is placed flat on the tissue and seated correctly in the arm. Referring to the LCM technical manual or calling technical support will sometimes be necessary. Following LCM and RNA isolation, the quality of the RNA should always be assessed using a bioanalyzer prior to any gene expression analysis.

There are several types of laser capture instruments currently on the market including laser cutting (Life Technologies, Leica Microsystems) and laser catapulting (Zeiss) instruments. Our LCM system works well for capturing small numbers of cells. Other high-throughput and more automated systems may be more suitable for obtaining larger numbers of cells for genomic and particularly proteomic analysis. Indeed, LCM using these automated systems has great potential for analysis of protein expression in identified cells or enriched populations of cells.20 Furthermore, LCM can facilitate gene expression analysis of immunolabeled cells,21 allowing us to investigate gene expression in defined cell types regardless of the complexity in the most heterogeneous tissues. Thus, LCM is an excellent tool for cutting-edge molecular studies of single or enriched populations of cells.

This work is funded by R01 NS052532 (to HLH), the Moody Foundation, and the Department of Anesthesiology. We thank Laurie Bolding, Christine Courteau Butler and Christy Perry for their editorial assistance, and Christy Perry for layout and excellent production of all figures, tables and artwork.