Tissue engineered fibroblast-derived native matrix is an emerging tool to generate a stromal substrate which supports epithelial cell proliferation and differentiation. Here a protocol applying this methodology to assess the impact of different stromal cell types on tumor cell biology is presented.

3D organotypic cultures of epithelial cells on a matrix embedded with mesenchymal cells are widely used to study epithelial cell differentiation and invasion. Rat tail type I collagen and/or matrix derived from Engelbreth-Holm-Swarm mouse sarcoma cells have been traditionally employed as the substrates to model the matrix or stromal microenvironment into which mesenchymal cells (usually fibroblasts) are populated. Although experiments using such matrices are very informative, it can be argued that due to an overriding presence of a single protein (such as in type I Collagen) or a high content of basement membrane components and growth factors (such as in matrix derived from mouse sarcoma cells), these substrates do not best reflect the contribution to matrix composition made by the stromal cells themselves. To study native matrices produced by primary dermal fibroblasts isolated from patients with a tumor prone, genetic blistering disorder (recessive dystrophic epidermolysis bullosa), we have adapted an existing native matrix protocol to study tumor cell invasion. Fibroblasts are induced to produce their own matrix over a prolonged period in culture. This native matrix is then detached from the culture dish and epithelial cells are seeded onto it before the entire coculture is raised to the air-liquid interface. Cellular differentiation and/or invasion can then be assessed over time. This technique provides the ability to assess epithelial-mesenchymal cell interactions in a 3D setting without the need for a synthetic or foreign matrix with the only disadvantage being the prolonged period of time required to produce the native matrix. Here we describe the application of this technique to assess the ability of a single molecule expressed by fibroblasts, type VII collagen, to inhibit tumor cell invasion.

The use of biomaterial in 3D tissue culture has enabled researchers to study cell behavior in the laboratory under physiological conditions more akin to an in vivo environment than that of one recapitulated with 2D adhesion and a plastic substrate. In particular, great strides forward have been made in modeling stratified epithelia with the adoption of 3D culture methods at the air-liquid interface1-4. Such techniques faithfully mimic keratinocyte differentiation and tumor cell invasion enabling greater flexibility and fidelity for researchers studying these processes. The choice of biomaterial substrate to mimic the stromal environment has primarily involved the use of type I collagen, Engelbreth-Holm-Swarm mouse sarcoma matrix and de-epidermized dermis. For example, cancer-associated fibroblasts have been shown to contribute toward cancer invasion5, initiation, and progression via stromal-epithelial interactions6,7 when grown in such substrates.

The gold standard for mimicking the stromal environment in skin, the largest and most widely studied stratified epithelia using such techniques, is regarded to be de-epidermized human dermis (DED). Preparation of DED involves the removal of the epidermis via trypsinization or physical disassociation from human cadaver skin3,4. However, access to such skin can be very difficult for laboratories not associated with clinical institutions, and diseased dermis is near impossible to obtain. As an alternative, laboratories frequently use a combination of type I collagen (isolated from rat tails) and/or Engelbreth-Holm-Swarm mouse sarcoma matrix.

After the discovery in 1927 by Nageotte8 that collagen can easily be isolated using acetic acid and salt precipitation, its application to tissue culture was subsequently pioneered by Huzella and colleagues9. Collagen coating proved to be superior to glass for cell culture of 29 strains and tissue explants as interrogated by Ehrmann and Gey9. Currently, the major type of collagen used in tissue culture is isolated from rat-tail tendons, and is usually bought from commercial sources. However, the drawback for faithful substrate recapitulation is that the rat tail collagen is not identical to human collagen, or the human dermis, where type I and III collagens are present as major constituents, and isolated rat tail collagen is invariably fragmented.

Our laboratories have a keen interest in genetic skin diseases, particularly those with a predisposition to developing cutaneous squamous cell carcinoma (cSCC)14. In the case of recessive dystrophic epidermolysis bullosa (RDEB), a severe blistering disease with germline mutations in COL7A1 gene15-17, we have determined that the dermal microenvironment in these patients is tumor promoting18. During the course of this study we were unable to assess the tumor promoting properties of dermal fibroblasts embedded within collagen I/ Engelbreth-Holm-Swarm mouse sarcoma matrix and investigated ways of assessing cells’ own, native matrix. To achieve this, we modified a previous technique from the laboratory of Lucie Germain working on human skin equivalents19,20. Germain’s technique was able to reconstruct human skin with well-organized basement membrane using primary human keratinocyte and fibroblast cultures in the absence of a synthetic or cadaveric scaffold.

In this paper the steps used to recapitulate the cutaneous tumor stromal microenvironment (native matrix) derived directly from primary stromal fibroblasts in vitro are described18. Native matrices produced by long-term culture of fibroblasts were used as a dermal equivalent to assay for cSCC cell invasion. We present data using native matrix derived from either the extracellular matrix secreted by RDEB fibroblasts (deficient in type VII collagen (C7)) or from RDEB fibroblasts retrovirally transduced with a type VII collagen expressing construct and demonstrate the profound effect of a single collagen on tumor cell invasion.

This study was conducted according to the Declaration of Helsinki Principles and was approved by the appropriate Ethics Committees.

1. Preparation of Media and Reagents

4. Harvesting of 3D Cultures and Preparation for Histology

This technique opens up the possibility of examining and comparing the invasive behavior of tumor cells (in this case cSCC) under different 3D stromal environments.  Using this technique, not only C7-deficient native matrices that recapitulated the RDEB dermal environment can be generated, but also additional matrices that have been genetically engineered to over-express C718. As seen in Figure 2, invasion of RDEB cSCC keratinocytes was significantly retarded in C7-overexpressing native matrices compared to C7-deficient RDEB control. This invasion is visualized via standard histological methods, where the gels were fixed, embedded in paraffin blocks and then sectioned and immunostained. Suggested antibodies to use for staining are anti-keratin 14 (LL001) for cSCC cells and anti-vimentin (V9) for fibroblasts. 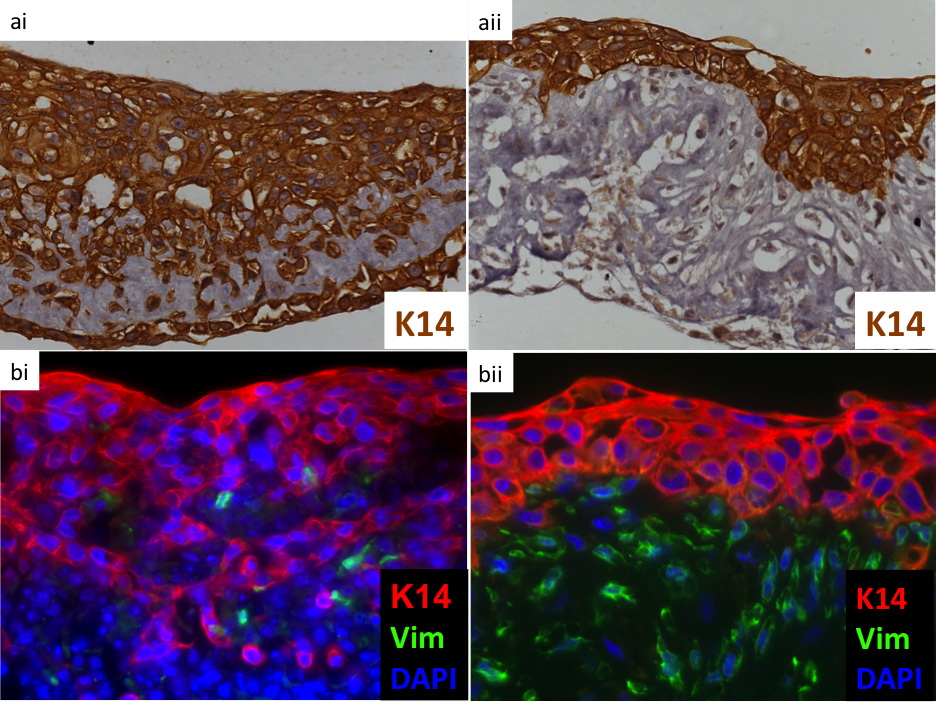 Figure 2. Keratin 14 (LL001) staining of the cSCC invasion into the native matrix derived from control RDEB fibroblast deficient in C7 (ai & bi), or in RDEB fibroblasts over-expressing full-length C7 expression (aii and bii), clearly demonstrates that the re-expression of C7 in extracellular matrix can retard cSCC keratinocyte invasion. Nuclei were stained with DAPI (in blue) and fibroblasts with vimentin (in green) in bi and bii.

Due to the nature of this experiment, the total time required for completion can be up to two months. Throughout this time, utmost care and sterile tissue culture practices must be employed to prevent microbial contamination.

Aside from its role as a cofactor in the synthesis of hydroxyproline and hydroxylysine of collagens, ascorbic acid stimulates collagen specific mRNA expression in fibroblasts22. The ascorbic acid of choice here is the more stable L-ascorbic acid 2-phosphate23. Refeeding is advised three times a week but this will invariably be dependent on the cells being studied. The initial fibroblast cultures will consume more nutrients as the weeks pass, and more frequent refeeding with larger media volumes may be advisable. It is important to be gentle when changing media and care should be taken to minimize disturbances to the cell layer during native matrix production.

When releasing and freeing the matrix cell layer from the plate, one must be careful not to poke holes through the matrix. Small blunt cell scrapers may also be used in lieu of 1 ml micropipette tips. Placement of the released native matrix onto a Nylon mesh first (being sure to lay the native matrix flat) makes for much easier handling and subsequent lifting to the air-liquid interface.

This protocol is the first to describe the use of native fibroblast matrix as a dermal substrate to model the microenvironment in tumor cell assays in order to obtain more accurate and physiologically relevant data.