Human pluripotent stem cells (hPSCs) are defined as encompassing both human embryonic stem cells (hESCs) and human induced pluripotent stem cells (hiPSCs), and have the unique capability of not only undergoing self-renewal under appropriate growth conditions, but also, the capacity to differentiate into all cell types derived from the three germ layers: endoderm, mesoderm, and ectoderm1. Due to these unique abilities, hPSCs hold great promise for regenerative medicine, disease modeling, and cell-based therapies2. While multiple cell types have been successfully differentiated from hPSCs, one significant challenge is the in vitro specification of exclusively adult-like hPSC-derived hematopoietic stem cells (HSCs) and definitive hematopoietic progenitors.

One likely barrier to the development of human HSCs from hPSCs is the presence of multiple hematopoietic programs within the human embryo3. The first program which emerges, termed "primitive hematopoiesis," originates within the extraembryonic yolk sac tissue and is best characterized by its transient production of erythroblast progenitors (EryP-CFC), macrophages, and megakaryocytes. Notably, this program does not give rise to HSCs, nor does it give rise to T and B lymphoid progenitors. However, the yolk sac does transiently give rise to restricted definitive hematopoietic progenitors, such as the erythro-myeloid progenitor (EMP4,5,6,7,8) and the erythroid-deficient lymphoid-primed multipotent progenitor (LMPP9). However, neither EMPs nor LMPPs are fully multipotent, or capable of HSC-like engraftment in adult recipients. In contrast, later in development, the classically defined "definitive" hematopoietic program is specified in the aorta-gonad-mesonephros region of the embryo proper, giving rise to all adult hematopoietic lineages, including the HSC. The specification of these intra-embryonic definitive hematopoietic cells occurs in a Notch-dependent fashion, via an endothelial-to-hematopoietic transition from hemogenic endothelium (HE)3,10,11,12,13,14. Aside from reconstitution capacity, the multilineage potential and Notch-dependence of these cells can be used to distinguish these definitive hematopoietic progenitors from the EMP and the LMPP (reviewed in references3,13).

Representative flow cytometric analysis and colony forming methylcellulose assays of hPSC-derived hematopoietic differentiation cultures are shown in Figure 2. IWP2-treated differentiation cultures will yield a distinct CD34+CD43− and CD34low/−CD43+ population, while CHIR-treated differentiation cultures will have <1% CD43+ cells on Day 8 of differentiation (Figure 2A,B)26. Primitive hematopoietic progenitors derived under IWP2 conditions isolated on Day 9 will give rise to predominantly primitive erythroid (EryP-CFC) and myeloid progenitors in the methylcellulose assays, while CHIR-treated cultures will be largely devoid of CFC potential at this stage (Figure 2C,F). Instead, the CD34+CD43- population derived from the CHIR99021 treatment is a heterogeneous population, containing endothelial progenitors, as well as CD34+CD43-CD73-CD184- HE (Figure 2B), which when isolated by FACS, will initially form a monolayer of endothelial-like cells (Figure 2D, left panel), that then undergoes an endothelial-to-hematopoietic transition, resulting in round, refractile non-adherent hematopoietic cells (Figure 2D, right panel). These hematopoietic cells can be assessed by flow cytometry for the expression of CD34 and CD45 (Figure 2E). Hematopoietic progenitors isolated from the EHT assays can be used in methylcellulose assays and give rise to large burst-like erythroid colony-forming units (BFU-E), small erythroid colony-forming units (CFU-E), and myeloid progenitors (CFU-M; Figure 2F).

Figure 3 depicts representative flow cytometric analyses of the T-lymphocyte assays potential from CHIR99021-derived CD34+CD43−CD73−CD184− hematopoietic progenitors (Figure 3A) and IWP2-derived (Figure 3B) CD34+CD43− hematopoietic progenitors, following 21 days of OP9-DL4 co-culture. The presence of a CD45+CD56−CD4+CD8+ population in CHIR-derived progenitors is indicative of definitive hematopoietic potential within the input CD34+ population. CD34+ and CD43+ progenitors isolated from IWP2-derived differentiations do not give rise to T-lymphocytes in this assay, under these differentiation conditions18,26. 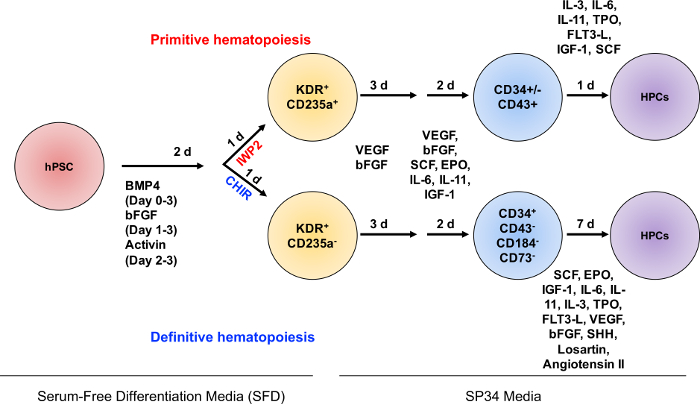 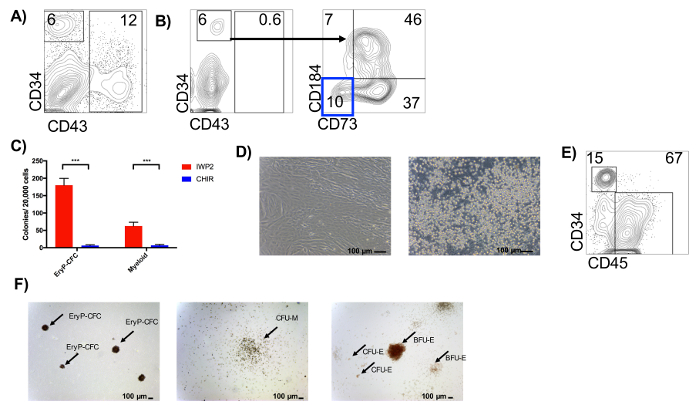 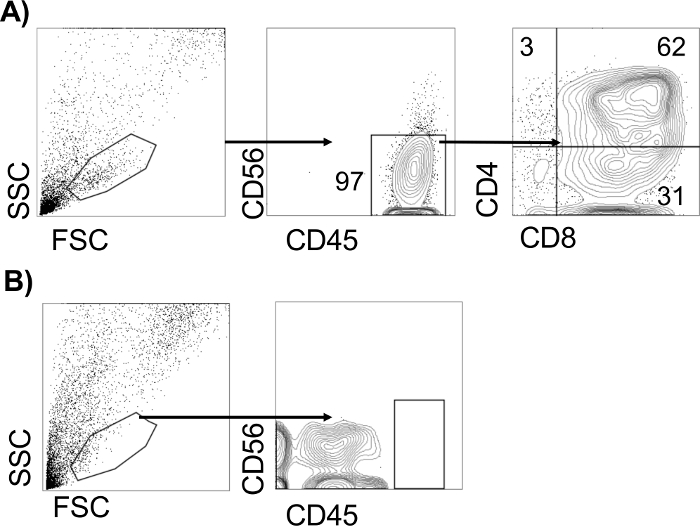 When CHIR99021 is used during mesodermal patterning during days 2 and 3 of differentiation, a population of exclusively definitive hematopoietic progenitors will be specified. On Day 8 of the differentiation protocol, CHIR99021-derived cultures should be comprised of a distinctive CD34+CD43− population, with little to no CD43 expression26. The CD34+CD43− population is a heterogeneous population of endothelial cells with hematopoietic, venous, and arterial potential that can be demarcated based on CD73 and CD184 expression, with HE cells lacking the expression of both27,28. When definitive HE is isolated after undergoing a NOTCH-dependent endothelial-to-hematopoietic transition (Section 5)28 it will yield CD34+CD45+ hematopoietic progenitors that will give rise to BFU-E and myeloid cells in methylcellulose, but not EryP-CFC26,28 (Figure 2). In addition, BFU-E colonies can be isolated and assessed for globin analysis, which will predominately express the fetal globin HBG in comparison to embryonic HBE (not shown)26,28,37. In contrast, the lymphoid potential can be directly assessed from isolated HE, as the NOTCH-dependent endothelial-to-hematopoietic transition occurs on the OP9-DL4 stroma18,26,28. The definitive HE specified with this method contains erythro-myelo-lymphoid progenitors at a clonal level28, which functionally distinguishes it from our current understanding of EMP or LMPP progenitors3. As such, the presence of T-lymphoid and HBG-expressing erythroid potential, coupled with an absence of EryP-CFC potential, can be used to reliably indicate the definitive hematopoietic specification from hPSCs. Of note, solely assessing for progenitors that can give rise to HBG-expressing erythroblasts may not accurately determine the definitive potential, as, similar to that described above, the human EMP, and its signal requirements, has not been characterized to-date (reviewed in reference3).

This simple differentiation strategy is very powerful as it allows for the generation of exclusively primitive or exclusively definitive hematopoietic progenitors, enabling disease modeling comparative studies of the two programs from patient-derived iPSCs or gene-modified hPSCs. Similarly, human developmental processes can be interrogated, such as discovering what additional signal pathway(s) are required to confer self-renewal capacity, and hence HSC-like potential, from the definitive hematopoietic progenitors.

In summary, WNT manipulation during mesodermal patterning in hPSCs specifies primitive CD43+ or definitive CD34+CD45+ hematopoietic progenitors, which can be isolated and used to study hPSC-derived hematopoiesis.