The gut is the largest endocrine organ of the body, with hormone-secreting enteroendocrine cells located along the length of the gastrointestinal epithelium. Despite their physiological importance, enteroendocrine cells represent only a small fraction of the epithelial cell population and in the past, their characterization has presented a considerable challenge resulting in a reliance on cell line models. Here, we provide a detailed protocol for the isolation and culture of mixed murine small intestinal cells. These primary cultures have been used to identify the signaling pathways underlying the stimulation and inhibition of gut peptide secretion in response to a number of nutrients and neuropeptides as well as pharmacological agents. Furthermore, in combination with the use of transgenic fluorescent reporter mice, we have demonstrated that these primary cultures become a powerful tool for the examination of fluorescently-tagged enteroendocrine cells at the intracellular level, using methods such as patch clamping and single-cell calcium and cAMP-FRET imaging.

The overall goal of this method is to isolate and culture mixed murine intestinal cells to enable the study of gut peptide secretion and live cell imaging of enteroendocrine cells. An early version of this procedure was originally published in 2008 by Reimann et al.1 and has since formed the basis of a further 20 publications from our group. For this manuscript, we chose to focus on small intestinal cultures as they are more challenging to establish than colonic cultures.

Enteroendocrine cells secrete an array of gut peptides including glucagon-like peptide 1 (GLP-1), glucose-dependent insulinotropic peptide (GIP), cholecystokinin (CCK) and peptide YY (PYY)2. These gut peptides have important physiological roles in orchestrating postprandial responses such as the slowing of gut transit, potentiation of glucose-stimulated insulin release and induction of satiety. GLP-1 mimetics and drugs which inhibit its degradation are currently licensed for the treatment of type 2 diabetes and there is ongoing assessment of the therapeutic potential of stimulating the endogenous secretion of this peptide3. A better understanding of enteroendocrine physiology and the mechanisms by which secretion is either stimulated or inhibited is, therefore, of critical importance.

Gut peptide secretion can be studied using a variety of in vitro and ex vivo experimental models, each with advantages and disadvantages (for a comprehensive recent review also covering the use of in vivo models see Svendsen et al.4). Ex vivo techniques such as the isolated perfused intestine5 and Ussing chambers6 are currently being used to explore gut peptide secretion in response to various substances. The main advantage of these methods, as compared to primary cultures, is that the immediate environment of the enteroendocrine cells remains largely intact and importantly, the polarity of the cells is preserved. Therefore, it is possible to elicit information regarding which cell surface a secretagogue is acting on6. However, these are typically low-throughput techniques and the quality of the data derived from them relies heavily on the integrity and viability of the intestinal tissue, which inevitably decline over time.

Intestinal organoids are now increasingly being used as in vitro models for the study of enteroendocrine cell function and development7. Organoids, which can be derived from both murine and human tissue, have the benefit of forming 3D 'crypt-like' structures that maintain cell polarity in culture. However, organoid-derived enteroendocrine cells have yet to be fully characterized and their similarity to native L cells remains largely unknown. Primary cultures have the advantage of being a step closer to the physiological setting, as enteroendocrine cells are not maintained and differentiated in artificial conditions for prolonged periods of time.

An alternative primary culture method which has been employed for the assessment of gut peptide secretion is the isolation of fetal rat intestinal cells (FRICs)8. However, the culture of adult intestinal tissue has met with less success and some differences have been observed in the responsiveness of FRICs vs. adult murine intestinal cells (e.g. glucose8).

Enteroendocrine-like cell lines (e.g. GLUTag, STC-1 and NCI-H716) have traditionally been used to distinguish direct vs. indirect effects on enteroendocrine cells and to dissect underlying molecular mechanisms coupling stimulus to secretion; see Kuhre et al.9 for peptide production and secretion by 'L cell-like' immortalized cell lines. This has been necessary as enteroendocrine cells, scattered along the gastrointestinal tract, constitute just under 1% of intestinal epithelial cells10 and sorted cells, in our hands, do not survive in culture1. Cell lines remain useful tools owing to the fact that they are a largely homogeneous cell population which is conducive to genetic manipulations such as gene-silencing. Consequently, it is easy to investigate the role of proteins which cannot be targeted pharmacologically, when transgenic mice are not available. However, cell lines are not always valid models of primary cells. While there are many similarities, findings from primary cultures have on occasion highlighted differences in the signaling pathways activated by certain nutrients in primary L cells compared to GLUTag cells, for example (e.g. peptones11). Crucially, in combination with transgenic fluorescent reporter mice, the primary culture model enables detailed examination of individual primary enteroendocrine cells at the intracellular level. Fluorescently-tagged L cells within primary cultures have been used by our group for patch clamping1,12 studies, and single-cell calcium11,13 and cyclic adenosine monophosphate-FRET imaging14 studies, which have yielded significant advances in the field of enteroendocrine physiology.

The following protocol is optimized for performing secretion experiments, using a 24-well plate or for the preparation of up to 16 imaging dishes, from a 10 cm section of the small intestine from a single adult mouse. The protocol can be easily modified for the study of colonic cells by increasing digestion times and collagenase concentration.

All animal procedures were approved by the University of Cambridge Animal Welfare and Ethical Review Body and conformed to the Animals (Scientific Procedures) Act 1986 Amendment Regulations (SI 2012/3039).

4. Preparation of BBM-coated Plate/Dishes and Digestion Medium
NOTE: The following steps should be performed in a tissue culture hood (with incubation steps in 37 °C water bath). 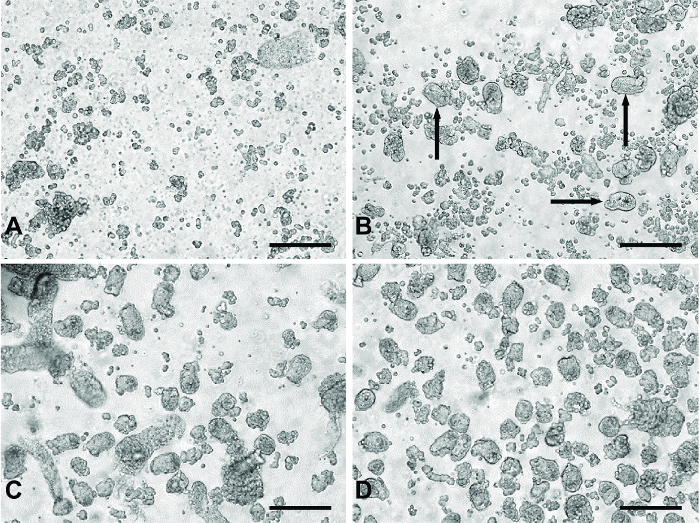 Figure 1: Representative images of 'digests' from primary small intestinal culture method. (A) Typical material from 'digests' 1 and 2 containing primarily single cells and cell debris. (B) An example of products from 'digest' 3. The black arrows indicate crypt fragments appearing in the digest material. (C) Typical of 'digest' 4 or 5. Panel (D) represents pooled digest material from 'digests' 3-5 passed through a 100 µm filter to remove the larger unwanted tissue fragments seen in (C). All images were taken using a digital inverted microscope with a 20X objective. Scale bars = 100 µm. Please click here to view a larger version of this figure. 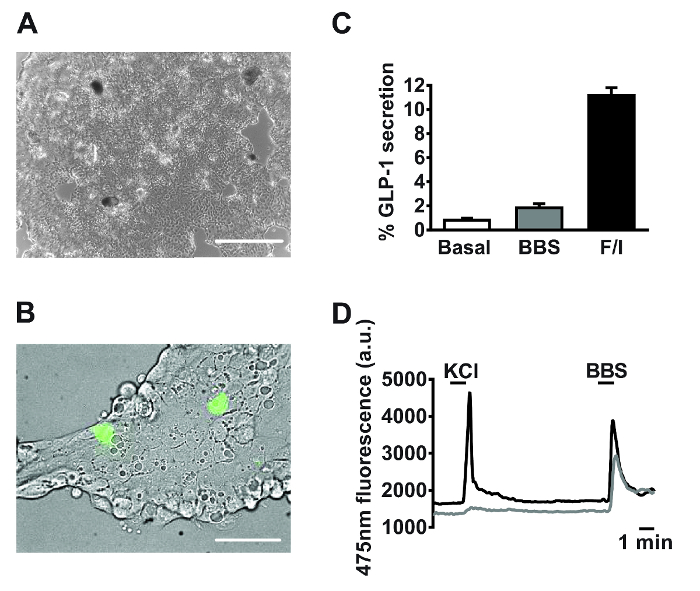 This protocol describes the isolation and culture of mixed murine small intestinal cells to enable the study of gut peptide secretion and single cell imaging of labelled enteroendocrine cells.

To increase the likelihood of the small intestinal cultures being successful, it is important that the protocol is carried out as swiftly as possible (ideally, within 3 h of harvesting the tissue) and that the tissue is kept in ice-cold medium or buffer prior to the digestion process, to limit cell death. While it is not essential, especially for colonic cultures, removal of the muscle layer from the small intestine is strongly encouraged. The small intestinal culture protocol has been standardized as much as possible. However, it is important to note that no digestion process is identical. There are many steps during this protocol where variability can be introduced on a day-to-day basis e.g. the degree of muscle removal, the size of the 'minced' tissue pieces, the strength of shaking, the potency of a particular batch of collagenase etc. It is therefore, of paramount importance to inspect aliquots of each of the different 'digests' under the microscope to assess the progress of the digestion process and tailor the shaking and the number of 'digests' accordingly. It is recommended to shake more gently to begin with and, if crypt fragments are not obvious from 'digest' 3 onwards, to start shaking more vigorously.

From our experience, enteroendocrine cells do not proliferate in culture and are usually lost from small intestinal cultures within 4 days. Nevertheless, this allows ample time to perform gut peptide secretion experiments (typically carried out over 2 h, 18-24 h post plating) to test physiological stimuli and/or pharmacological agents. Experiments requiring an overnight incubation prior to the secretion experiment are also feasible e.g. in the case of pre-treatment with pertussis toxin15.

The primary culture technique presented here is a well-established method, as evidenced by the volume of research output it has produced over the years. The primary culture model has been used to study the secretion of a variety of gut peptides, including GLP-11, GIP18 and PYY19, in response to diverse nutrient and non-nutrient14,20 stimuli and inhibitors. Furthermore, the same technique has been successfully applied to the culture of human intestinal cells21. Often, a combination of the primary cell culture method along with an additional experimental model e.g. ex vivo or in vivo can provide the most insight6. Notably and in contrast to other methods, this technique has important applications beyond the measurement of gut peptide release. We have demonstrated that primary small intestinal cultures derived from transgenic reporter mice are powerful tools for the interrogation of intracellular signaling pathways coupled to gut peptide secretion, using for example the Ca2+ and cAMP sensors, GCaMP311,13 and Epac2camps14, respectively, as well as electrophysiological techniques12.

As with all in vitro models, the primary intestinal cultures have certain inherent limitations including the loss of polarity of the epithelial cells in culture, as well as the loss of blood supply and innervation. It is difficult to estimate the potential impacts of these artificial conditions on enteroendocrine cell function. However, data obtained from primary cultures have often been translatable in the in vivo setting (e.g. effects of short-chain fatty acids on GLP-1 secretion15).

The primary intestinal cultures are a versatile technique with many potential applications. They have already provided important mechanistic insight into the regulation of gut peptide secretion.

GLP-1 immuno-assays were performed by the Core Biochemical Assay Laboratory at Addenbrooke's Hospital.